Shivering Isles - The March of Order

The Greymarch begins anew, once in an era.
The forces of Order are amassing all across the Isles.
Deep underground, the Grummites are preparing for war.
Heretics, Zealots and Apostles are seizing the chance to leave their mark upon the Isles.
The Court of Madness stands in the middle of conflict with the help of Mazken and Aureal forces.
Choose your side and defend the Isles, or destroy them as you please.
Either way, your only hope lies deep within the heart of madness.

Rend the flesh of your foes! A mortal champion to wade through the entrails of enemies!

"Really, do come in. It's lovely in the Isles right now. Perfect time for a visit." 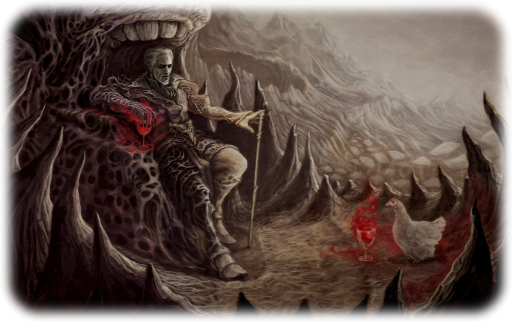 Shivering Isles - The March of Order is a M&B Warband mod which aims to recreate and expand the beautiful world of Shivering Isles, based on Bethesda's TES4: Oblivion expansion.
The mod is being developed almost from scratch and the models are being made step-by-step, avoiding the use of any of Bethesda's official game materials.

Since I'm working on this project alone, any help would be gratefully accepted further along the way (as long as it matches the quality of the mod).
I will not except any material that violates the intellectual property of Bethesda or any other company.

Will be updated upon release and included in the game files.

Hey guys, I'm posting here just to answer the most frequently asked question...
Yes, the idea is pretty much still alive, and I'm still very slowly working on it (in my spare time).

As I've said a long time ago, I've been waiting for Bannerlord.
Honestly, when it was announced I thought that it's just a few months from being released.
Apparently I was wrong.

Keep your fingers crossed and worship the Nine.
Or you know, the other, darker ones.
To each his own.

Answering some frequently asked questions about the factions.

PLEASE MAKE THIS OPEN SOURCE. Tamriel: Bloodline's End could use your help.

Tracking now.
May Talos guide you!

oh man what did i just watch

You just enjoyed art in its purest form.

Oh my god.It is alive....It has returned...Who else has noticed all these new mods coming and all the old ones resurrecting?....The Warband Apocalypse has begun!

Yeah, I think Bannerlord has sparked an interest in the gaming community. Since it's not coming out for a while people are looking to Warband to see what all the hype is about. Warband was never promoted like Bannerlod so I reckon there's a lot of new players starting out. Great. More players the better. Might help Mods in the future...
Moeby