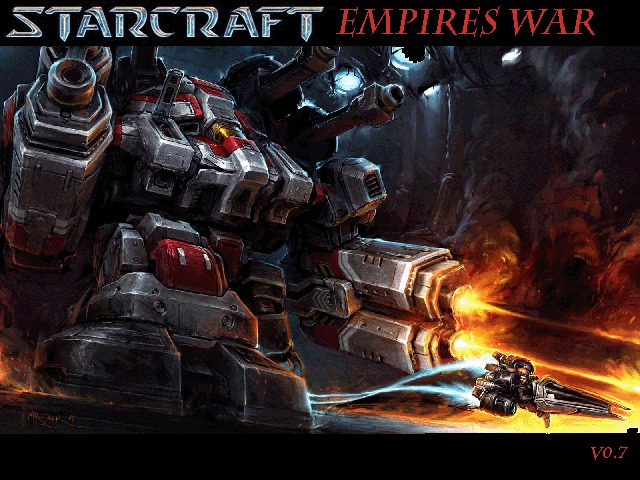 As previously stated, this campaign is a full 30 level map set for
Brood War. It does not require any special .exe to run, just stock BW.
Also included are 6 “Cinematic” maps (these don't count toward the
level count of 30, by the way), which help advance the story. You
will play as all three races, with each race having 10 levels and 2
Cinematic maps, giving you an even split.

These maps were made to closely adhere to the “classic” SC feel. Very
little fancy stuff is used. No odd terrain, no stacked units/buildings, no “sprites”, etc. One other very important thing to note is that this campaign is extremely hard. If you were to rate the campaign maps on a 1-10 scale of difficulty, with the hardest Brood War maps registering a ~3-4 on the scale, there are multiple maps that would be ranked 10 or beyond. “Commando” maps will usually require near-perfect micro at all times. Later “standard” maps will push your ability to create the perfect attack force, attack at the right place at the right time, and manage your resources, to its limit. Unless I've vastly underestimated the SC community's skill, then beating the whole campaign without cheating is quite an accomplishment. If you seek a challenge or an opportunity to hone your skills, then look no further.

Don't let the above paragraph scare you, though. If the difficulty
gets too high, there's no shame in the odd cheat here and there if
you find the level unbeatable. Also, the first few maps of all three
of the campaigns are pretty minimal in difficulty, so nearly anyone
can get their foot in the door.

Players
1 player only. This is a single player Campaign.
Map Tilesets
Every single tileset is used multiple times.
Map Size
Map size varies from as small as 64x64 to 256x256. Nearly every possible dimension combination is used.

STORYLINE/INTRODUCTION
This campaign takes place shortly after Brood War's conclusion. The Protoss have been broken, Zeratul is in exile after discovering the horrifying truth behind Samir Duran, and Mengsk has returned to Korhal to lick his wounds. The story was very heavily inspired by the Brood War secret mission Dark Origin. I encourage anyone not up to speed on that map (yes, all 5 of you) to either give it a play thorough or watch the dialogue from it on Youtube.

As for the campaigns themselves, there are three different ones, much like SC and BW.

The first campaign is the Zerg campaign, called The Grand Experiment. As the name suggests, this campaign focuses heavily around Duran and his plans to create the ultimate race of hybrids as well as revive his dark master. In these missions, you will almost always control Duran and sweep aside the various enemies that stand in your way.

The second campaign, the Terran campaign, is known as Confederate Counterblow. IT takes place immediately after the Zerg campaign's conclusion. This set of levels mainly stars Edmund Duke and his second in command, Jack Dark. Yes, General Duke. You read that correctly. Duke's return is explained in full detail during the Zerg campaign. As for the Terran levels, Duke's army, Sigma Squadron, is recovering from the crushing defeat suffered at the hands of Duran and his hybrids. Once you're done rebuilding Sigma Squadron, Duke, bent on vengeance, sets his sights on Arcturus Mengsk and his recovering Terran Dominion.

At one point in the campaign, the story shifts briefly to Jim Raynor as he aids Artanis in searching the stars for their lost comrade, Zeratul. However, our heroes find a lot more than they bargained for...

The final campaign, Hybrid Inferno, obviously focuses around the Protoss, namely Zeratul. This campaign begins with Zeratul finally making his return to Shakuras after failing to stop the hybrids from being created. Unfortunately for him, he's too late...

•Samir Duran – Duran's twisted schemes near fruition. Soon he will unleash his hybrids upon the universe. Can anybody stand in his way?

•Edmund Duke – Mysteriously surviving his supposed death on Korhal, he's returned more grumpy than ever. This time he's got his own personal army, Sigma Squadron, at his back. The origins of this army, and Duke's survival, are unknown.

•Xianou – A Protoss praetor, searching for Zeratul, under the command of Artanis.

•Jim Raynor – Raynor's Raiders assist Artanis in searching for Zeratul as well as in the coming battles against the hybrids.

•Artanis – Now the leader of the Protoss, is bent on finding Zeratul, for he strongly feels that he will need the Dark Templar's aid in the coming conflict.

•Zeratul - Searching the stars for Duran's hybrids, he lives in constant fear of Duran's dark prophecy.

•Jack Dark – The second in command of Sigma Squadron, an ace Wraith pilot. While Jack and Duke don't always get along, Jack serves Duke with blind loyalty.

•Isaac – A Terran Dominion scientist. Isaac finds himself caught between a rock and a hard place until he is rescued by Jim Raynor. This leads Isaac to defect over to the Protoss.

•Kerrigan – Now intent on hunting down our heroes, she quickly shifts her attention to Duran once she discovers what he's up to.

•The Dark Lord – Little is known about Duran's mysterious master except this: if he is allowed to return, the entire universe will be in jeopardy.

Fixed some bugs, balanced some units, added some news stuff. - - - -

STORYLINE/INTRODUCTION This campaign takes place shortly after Brood War's conclusion. The Protoss have been broken, Zeratul is in exile after discovering...

STARCRAFT: EMPIRE WARS As previously stated, this campaign is a full 30 level map set for Brood War. It does not require any special .exe to run, just...

Hey I was wondering if you could re put up this mod? It looks awesome and I would like to try it :) Thanks.

i don't see any new units like in screenshots, just plain vanilla SC

Can you fix the problem when Battlecrusier is attacking the air units? It doesn't give a damage to the enemy, especially Hyperion.

How do you play the campaigns?

wow coll avatar can you give me one