Design this patch thinking that I have always wanted to have the Vanilla version "Finished" in my opinion.

With this patch we can have a more satisfactory and aesthetic final game quality, free of modifications, it is a 100% vanilla patch.

Remaster "icons for the game.

Upgrade to the versions:

IMPORTANT !!! EXCLUSIVE PATCH FOR THE VERSION OF ROME TOTAL WAR OF STEAM

- Added the factions Macedonia, Empire of Ponto, Armenia, Dacia, Kingdom of Numidia, Scythia, Hispania and Thrace to the list of playable. (v1.52)

- Added leader portraits, start map in the campaign and description to all factions. (v1.52)

- Added an Estimate of difficulty of each faction before starting a campaign. (v1.52)

- Now all factions are available from the beginning. (v1.54)

- Added the Estimate of difficulty to the missing factions before starting a campaign. (v1.62)

- Added the factions of Britorromanos, Ostrogodos and Slavs to the list of playable factions (for this a small modification of the game was made) the britorromanos begin with Britain, which previously belonged to the Romans, the Slavs, where they normally emerge and the Ostrogoths are nomads where they usually start too. (v1.64)

-Now all factions are available from the beginning. (v1.64)

- Added the factions of the Persians, the Dahae, the Thracians, the Scythians and the Illyria to the list of playable factions. (v1.92)

- Added an Estimate of difficulty to each faction before starting a campaign. (v1.92)

- All the available factions in the historical battles not only the Macedonians can also play with the Persians, Greeks or Hindus. (v1.94)

- Now all available features from the beginning. (v1.94)

Hello guys !! I am new to the community and literally also new to modding but I have knowledge thanks to my systems studies, etc.

Now that I got the RTW I am dedicating love and sharing my hobby to do on this vacation. an update patch for the Rome Total War.

I MUST CLARIFY THAT THIS PATCH IS EXCLUSIVE FOR STEAM VERSION.

RTW Gold patch - can work normal CD version, but Alexander alone in the Steam version because it would be overwriting data files to normal RTW, are warned. 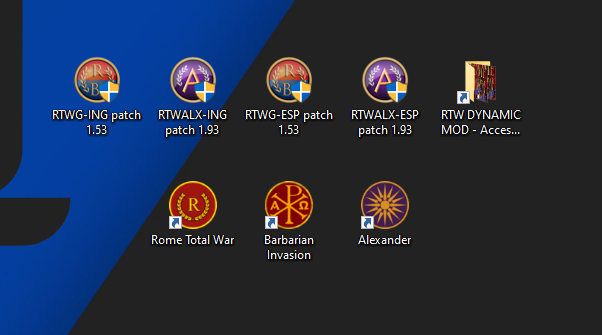 First of all I share a capture with the two versions of the patch that I have (English and Spanish) I am a Spanish speaker but I am also making the effort to bring this patch for those who speak English. In addition there is a letter called RTW Dynamic Mod: p is an old mod that I am compatible with the Steam version and that does not damage the game files, it will be a Modfolder, I hope to bring it these days for you.

Let's go parts in this patch, first. All factions unlocked (except Senate and slaves). My goal with this mod is that it is 100% functional and not a mistake I CTD. 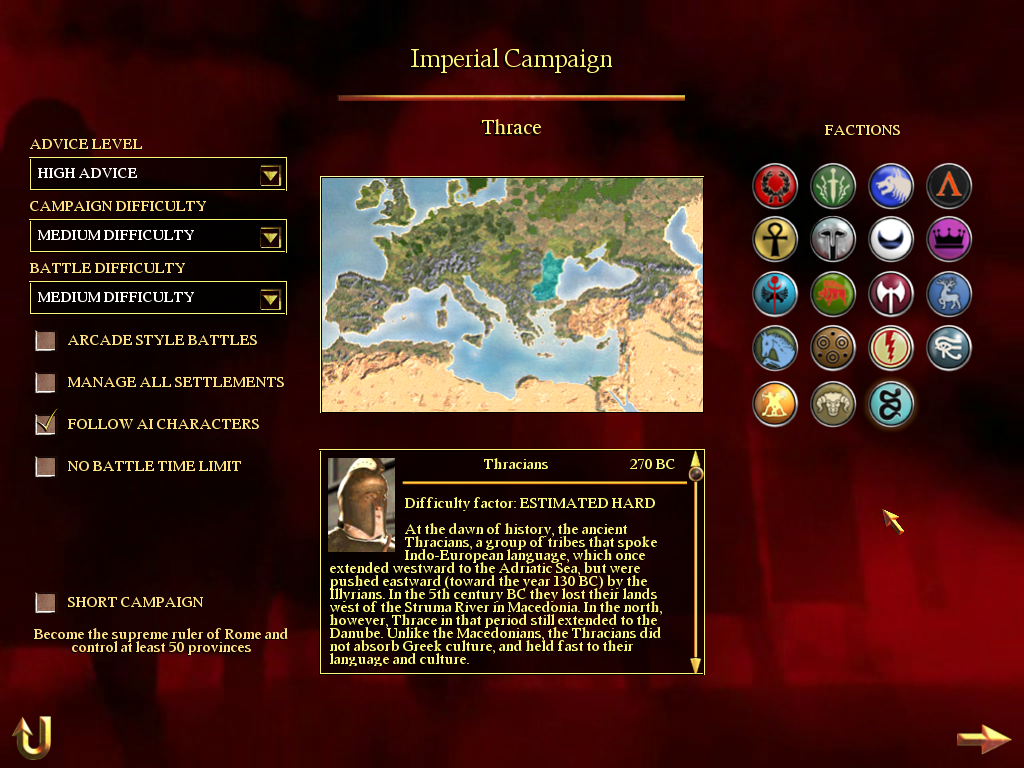 As you can see, the factions now have an image of the leader of the faction, a description and an estimate of the level of difficulty you expect when you play with them. Here is an image of my dear Thracians.

another update that we can find is the historical battles, these battles were blocked to play with a specific faction, now we can choose with which of them to participate in the battle, (obviously the one that was blocked had more advantage and you can easily defeat the enemies but it's a proven one) in a future patch I will add the multiplayer historical battles to singleplayer so that I can play them too. 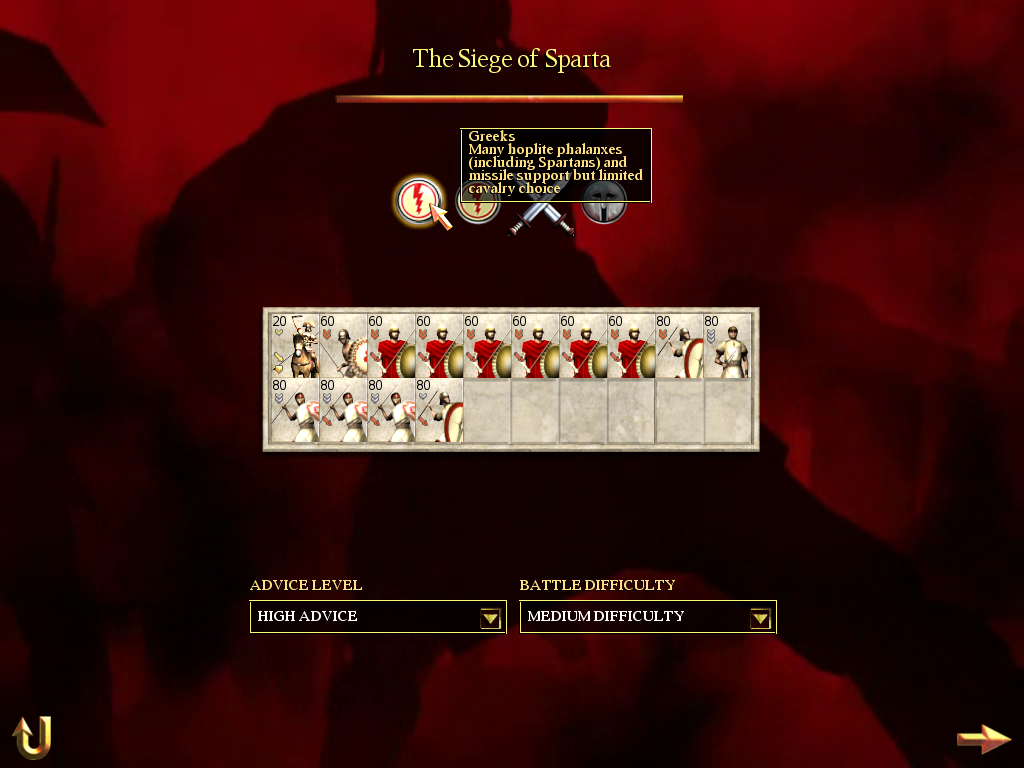 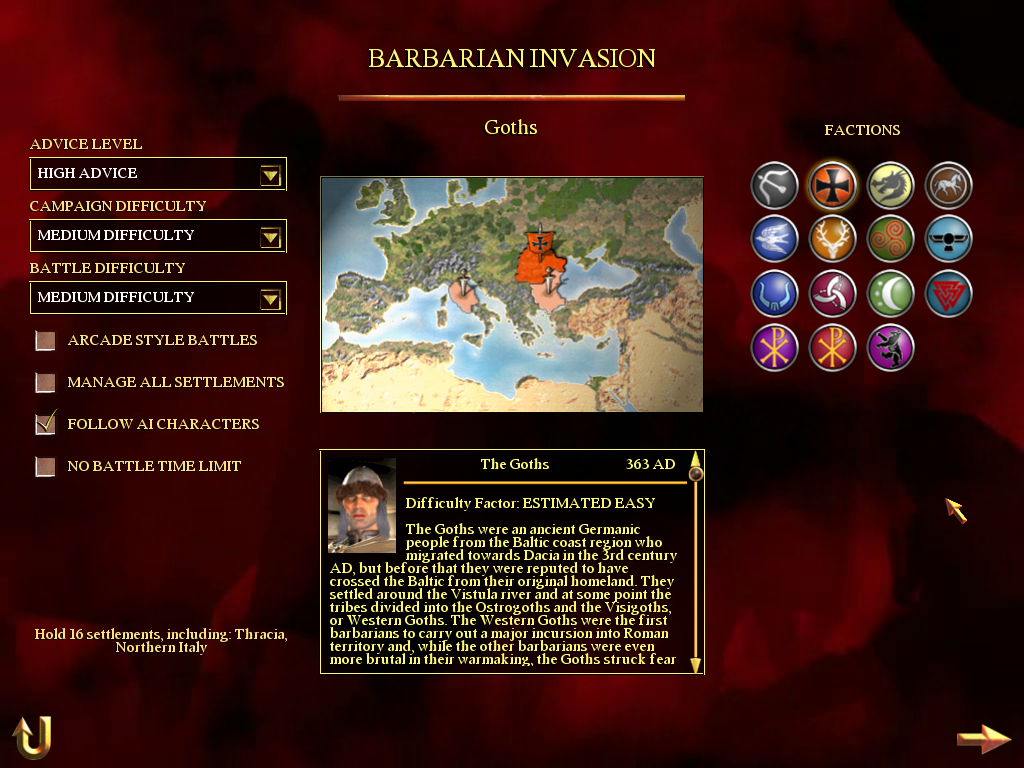 I also gave love to the barbarian invasion, now almost all the features are available, I say almost all because this version is a bit special. Here there are 5 emerging factions that cannot be played even if the file describ_strat.txt is modified, which are the Slavs, the Brito-Romans, the Ostrogoths and the rebels of the Roman empires of the East and West. (These factions I plan to add them in a future patch as provincial campaigns, to make them playable because many have asked me to play with the britoromanos)

EDIT : THE BRITO-ROMAN, OSTROGOD AND SLAVE FACTIONS ARE ALREADY AVAILABLE (Small modification without affecting the Vanilla)

As you can see, the barbarian now have many factions available and each of them has a leader image, description, difficulty estimate and starting map.

In historical battles they have also been unlocked and now you can play with any faction in the battles. 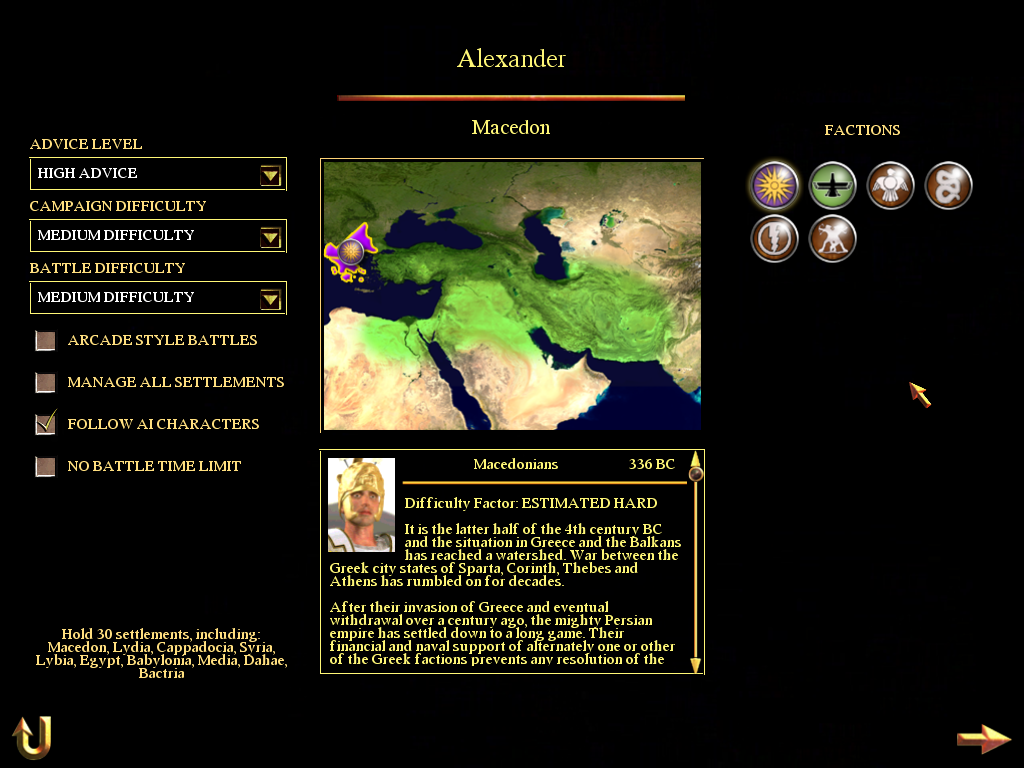 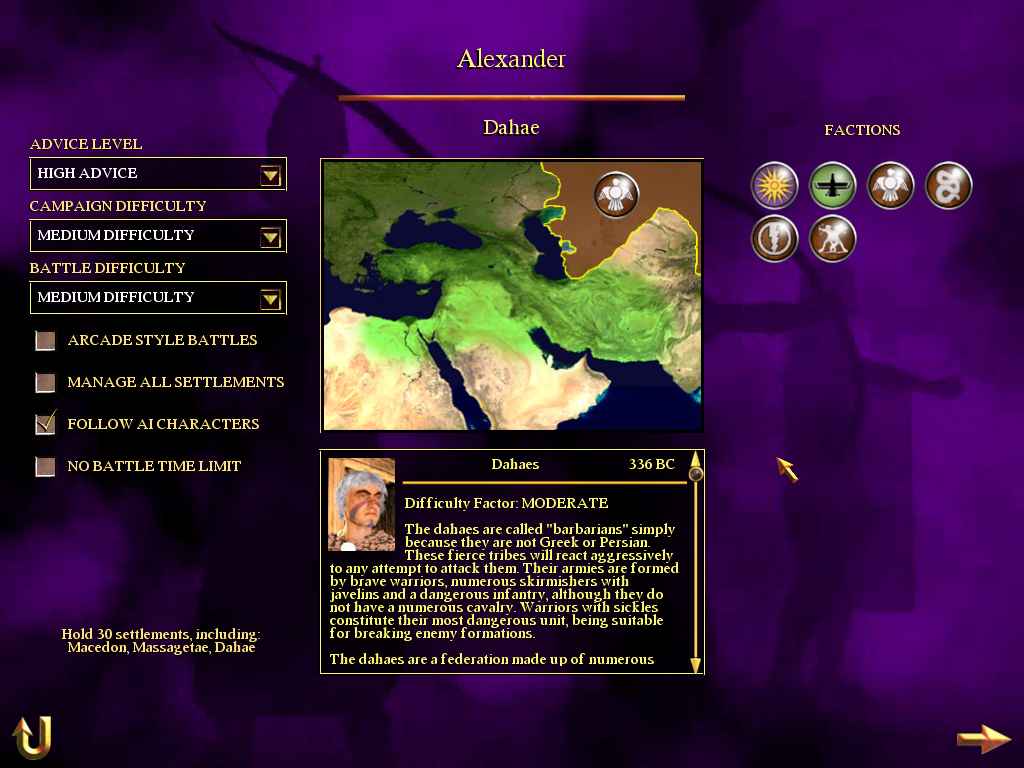 As can be done, now if a well-done campaign can be carried out with all the available factions, we can play with the Macedonians, the Persians, the Dahae, the Thracians, the Iyrians and the Scytas.

All available factions have their leader image, campaign map, description and difficulty estimate. (Now it seems a new expansion and campaign and not just Macedonia).

Alejandro's historical battles are now unlocked to play with any of the available factions as in the other versions.

I hope this little summary is to your liking and support my future projects that will be dynamic mods, and mundus mods. : p soon news ....

PD: THIS IS THE LAST UPDATE FOR NOW, I have planned a version 1.55 (final) with a better installer and some final corrections such as the image of the Thracians and ilyria that are wrong in the Alexander, among others but are imperceptible changes for most that would be My final edition.

English patch for Rome Total War version of Steam v1.54 This patch updates RTW and BI to versions 1.54 and 1.64 respectively.

how can i uninstall the mod

the mod is installed in the main rome folder, so overwriting files uninstall it cannot. But you can do this.

so you reset the modifications you make without reinstalling the game.

query, why do you want to denist it? This "mod" so say it does not change the gameplay at all, have you had any problems?

hola i was playing alexander as the illyrians an defeat alexander and the game ends.so i think he must be alive to have a longer game is not so good
thanks for your big work
nom

oh you're right that script is still working, it comes from vanilla I can make a modification, one more thing to add to 1.55 ty

Hi, so I am curious to know all that this unofficial patch does. Can you give me a few examples?

623/5000
Of course, this patch is aimed at improving the aesthetic quality of the game free of modifications as I say is a 100% vanilla patch.

in RTW: the faccions missing unlocked, with description, leader image and campaign map, it works like any of the standard features.

BI: unlocked missing factions, except the britoromanos, Celts and ostrogodos for being emergent and to use them it would be necessary to modify the game with scrips.

Excuseme for the english, use traductor, i am spanish speaker