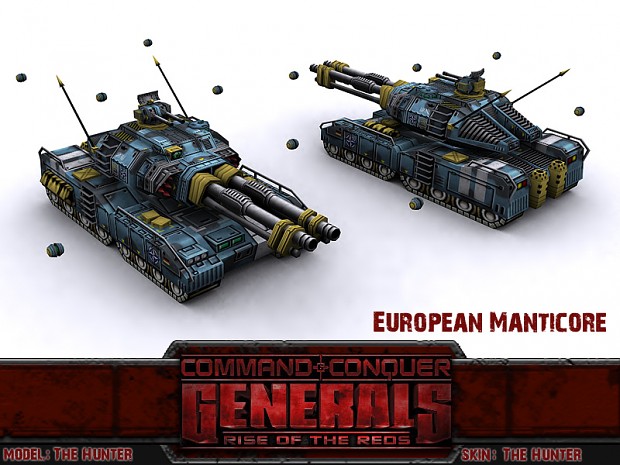 A hero vehicle in a sense. Something I was not expecting. Amazing work and concept development team!!! Keep up the excellent work.

on crack, with the eca touch

overlord crew reaction when they see this in the field...

Well, there is still only one at a time.
And the 30mm can only do so much to all the aircraft it'll attract.

Infact, the manticores are so freaking dangerous, that the Russian Federation authorized used of the Tremor again facilities rumored to hold them.

Ok, maybe not, But if I were the commander, I'd certenly would sue the tremor against what is basically the concept of "over-powered" on wheels.

i don't think that there are facilities that hold "them".

That thing wont last a minute when I mess up with BIG files. XD
Manticore Vs. Cherno-Medve (Black Bear Tank) on nuclear all the time !!!

Stalin is not amused 2.bp.blogspot.com
:P

what are those fly like things around it ? Repair Drones ??

It looks quite bulky and old for one of the world's most advanced tanks. lol.

It is a prototype with a LOT of new hardware, it is bound to be a little bulky.

it's always to see a face off between german and russian engineering.

Let's hope it's not painfully overcomplicated relative to its gain again.

love it, my fav tank yet!

A! HA!!! Finally the over-powered unit.

My jaw dropped four feet when I saw this.

hehe I like the small german flags on the sides =), tank made in Germany :D

Or maybe just a horde of nuke cannons. Can't go overboard with the fission and EMP shells.

a couple frogfoots maybe a hind or havoc and problem solved with armored support, in case it has escorts.

I'm going to have a Nuclear bomb in my pocket just in case I meet this Tank. XD

Still, you can only deploy one of them at a time and its only dangerous when paired up with other vehicles. Nothing like a swarm of Frogfoots or a rush of Sentinels can't handle :P

swarm of Frogfoots? I am an expert on that =D
"rush of Sentinels"
Does a group of 10 sentinels wiping out half an enemy base is considered a rush?
XD

So they're like a Mammoth Mark II but with wheels and a mobile repair facility?

More like the Mammoth Mark I by that comparison.

So beautiful... cant wait to compare their strength, speed, damage, and durability with the Sentinel

By the way, Good Mod.

This tank is going to need alot of escorts to survive a horde of russian MBT's charging at it. not to mention Hinds or Black sharks. Its a great support unit though But surely it will attract a lot of heat once spotted.

I really like the turret and barrel shape and detail.

Will there be a limit of how many orbs can repair a single vehicle at once? Otherwise I can imagine the Manticore being almost as powerful alone as with escorts.

So ahmmm.. this will be ECA's Hero unit?

Sentinel's will cry! Overlord's will beg for mercy! Paladin's will crumble! Marauder's will fall!

I love the guy who decided to -karma half the comments. Anyways, very nifty unit.

i was thinking about ECAs armor lately and i thought: they have jagdmamut and manticore and a prety good starter tank, arent they the best armor?

then i remembered that not only is manticore an optional thats limited to one but also jagdmamut is for general wolfgang only.

I think its a bit too small Ingame the Leopard ist nearly the same Size :)

I guess you could say 100 tonnes of ECA deplomacy XD

The 100 ton experimental Manticore tank is the most technologically advanced tank in the world. It sports dual 155mm cannons to fend off lesser tanks, a dual 30mm auto-cannon turret to dispatch any infantry and aircraft that venture into its sights and a set of rocket launchers to seal the deal. Deployed relatively early in the war, these rare tanks are usually seen leading entire ECA armor divisions into the fray against their Russian counterparts. The Manticore is infamous for being the only tank that is able to best the Sentinel in a one-on-one duel. This is not due to standard merits such as the plating of its armor or the parameters of its guns but rather because of nanite technology that can repair any damage done to the tank nigh instantly. Several small, orb-shaped bots actively hover around the Manticore and dispense a regenerative, self-hardening nano-foam that quickly solidifies inside any holes in the hull, thus filling out missing chunks of the tank's structure. There are even reported cases of the tank being fully repaired before its enemies could fire their second volley.

The orbs do not only repair their parent vehicle but also any friendly vehicles within range. This makes the Manticore fearsome not only by itself but also in a tandem with friendly units. Once a General has chosen to deploy the Manticore, two new, mutually exclusive upgrades will become available to his other tanks: Nano Shock Absorbers, devices that look like hexagonal panels that increase the armor of ECA vehicles, and Hydrogen Fuel Cells, new 'safe and green' engines that enhance the vehicle's speed. ECA Generals are only authorized to field one Manticore at a time, so utmost care with this beast is necessary. The Manticore is a new ray of hope to the European Continental Army that had seen so many defeats during the Russian onslaught. It's time to turn the tide, General!