Rise of the Moderns 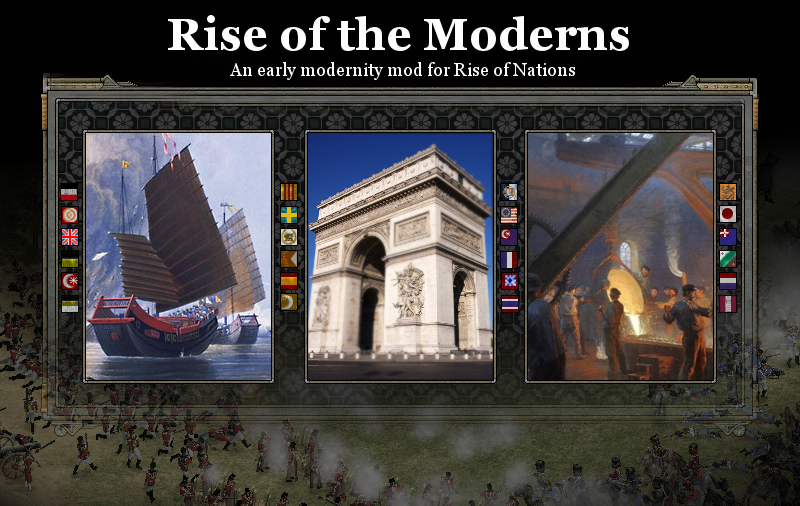 Work began on this mod in late 2016, and it is to be split up into several "chapters", being:

Ultima Ratio is in effect a rehash of Rise of Napoleon, an earlier mod by Ray Tang and originally hosted on Rise of Nations Heaven. However, while being a remake, this instalment of Rise of the Moderns sees the removal of the Rhine Confederation and Canada, and the insertion of Iran and Bavaria along with a vast slew of units for non-Western factions and bugfixes for buildings.

Several new non-European factions are slated, notably Mexico , Japan, and Siam; alongside the Italian kingdom of Sardinia, and is meant to cover the entire 19th century.

Chapter 3: Children of the Emperor

Children of the Emperor will continue to feature some of the previous units, structures and buildings.

As its name suggests this chapter focuses on Western colonisation and the Far East. We expect more factions to be implemented/converted over from Children of the Emperor.

Chapter x: Rise of the Moderns

The penultimate "chapter" it is the end of Rise of the Moderns — all 24 major factions as mentioned are fully implemented and ready to play, from the Thirty Years' War to the First World War.

*: Not implemented until Children of the Emperor.
**: Available for Extended Edition only.

Following experiments with AXP2 for Age of Darkness we discovered a couple of issues with Rise of the Moderns: Ultima Ratio. A patched version, v1.1, has subsequently been worked out and is now ready for download as shown below.

NB: All links offered pass through adf.ly. Without donations, this is the only way we can support ourselves :(

You may use whichever download link you are most comfortable with.

Once the file is downloaded, install it like you normally would install v1.0.

Introduction to Rise of the Moderns: Ultima Ratio

Explaining what this project is, and what it entails - especially the "chapter" system.

NOTE: This file has been superseded by v1.1 Please check the Article section for more info.

What Lists Nations you have?

This mod has finally been ported to Steam Workshop!
Steamcommunity.com

Regret to inform you that this mod is being discontinued for Gold, only the Steam version will be actively updated.

We are slowly covering this mod over time. Do not despair.

Finally, a new mod for Rise of Nations!
As you can see we now have FIVE preview images up. More will come along with the first of the four or so "chapters" of the game (which will expounded further later this coming week).

Single & Multiplayer
Tags
Embed Buttons
Link to Rise of the Moderns by selecting a button and using the embed code provided more...

Rise of the Ages Rise of Nations: Thrones and Patriots