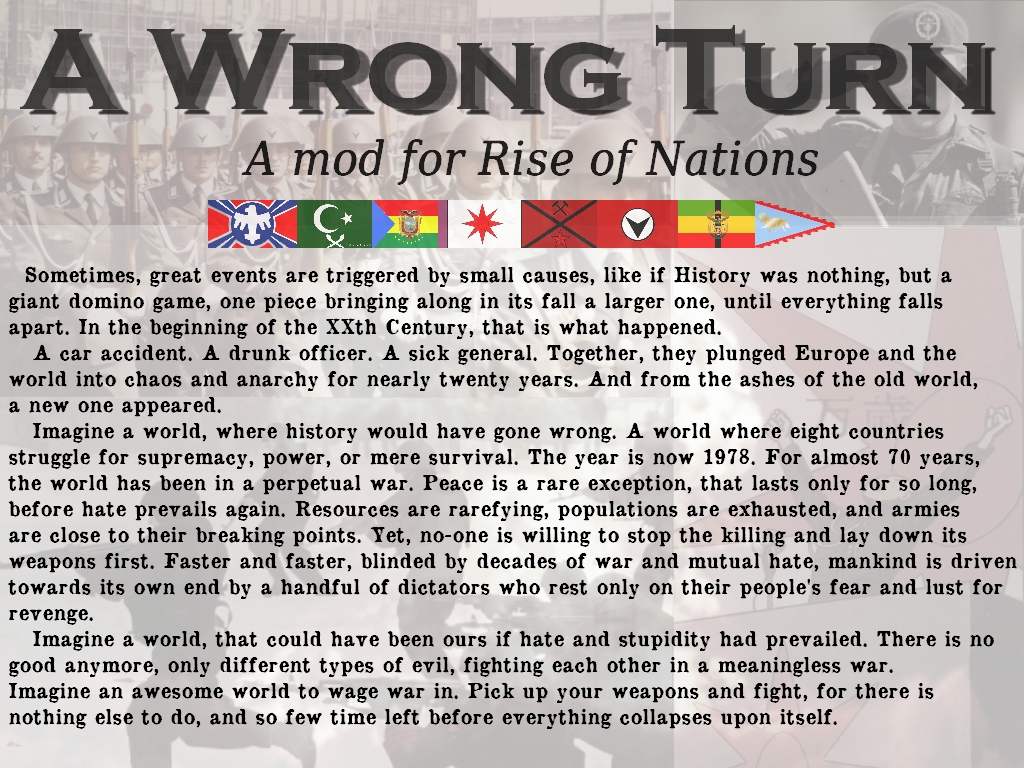 - An intricate and immersive alternate history background.
- Eight playable civilizations, each having its own eight unique units :
-The Worker's Republic of Vidalia
-The Great Reich of Salviatia
-The Atlantic Federation
-The New Golden Horde
-The Celestial Empire of the Eternal Rising Sun
-The Caliphate of Jihadia
-The Bolivarian Republic
-The Transsahelian United Kingdom
- More than four hundred new skins and buildings ! Every civilization has been given its own architectural set and unit set, no shared skins or units whatsoever.

- Over twenty new 3D models, so that not a single tank or plane will be used by more than one civilization.

- A new wonder system : every civilization enjoys its own 17 unique wonders, for a grand total of 136, mixing actual real-world ones, such as the World Trade Center, the Cristo Redentor, the Pentagon, or the Dome of the Rock and imaginary ones, such as the Black Obelisk of Kronstadt, the World Dragon, or the infamous Castle Wolfenstein.

- A new unit type in the airport, the Ground Attack Plane, fulfilling the role of a tactical bomber.

- A new interface, with a more modern look.

- A new soundtrack, more fit to the A Wrong Turn universe.

The AWT Team is back on business

What to expect in the upcoming weeks ?

Hopefully, we'll be able to release the long-awaited 1.01 update, featuring the infamous Experimental Units. Yes, the ones we brag about in the User Manual but actually aren't ingame. With a little more work, we can fix this and put the game up-to-date and matching with the Manual. Then, what is to be expected in the future ?

We have many ideas about features we'd like to incorporate to our mod : a quick-battle script, to allow more exotic units, such as chemical weapons and paratroopers ; enhanced naval warfare, with different, more specialized ship types : cruisers, frigates, destroyers, command ships...
We could also use Germanbacondragon's work on a Moon map to put up an entire expansion depicting battles on the surface of Earth's satellite. This idea is really exciting, but raises dozens of gameplay issues. Before we can make this happen, we would like to have the community's input about how to make a moon-based combat system be both balanced, fun and (relatively) realistic.

On any of these topics, we would very much appreciate your contribution, either by ideas, or even by actually helping us with coding, scripting or modelling. Stay tuned for more updates and screenshot as we get back to work !

The User Manual is online !

Finally, after more than a month of writing, the User's Manual for A Wrong Turn 1.01 is up and ready !

1.01 update in the pipeline

Almost one week after the original release of A Wrong Turn 1.0 - and its almost immediate hotfix, that's what you get for rushing into things ! - we have...

The ultimate ressource for A Wrong Turn players, the User's Manual contains everything you need to know about the game and it universe, from installation...

- Adds the proper modded "tribes" files to A Wrong Turn.

The 1.0 version of A Wrong Turn is available ! Currently, no installer, so be sure the check out the readme file.

I hope to see a version for Extended Edition.

my god i finally win the ww2 hurahhhhhhhhhhh

awesome mod i still love to play it!

Trying to resurrect it.....

Hope it resurrects i enjoy playing this mod

the mod include about 22 faction

how to instal:
1/you need to have the original game installed
2/you only have to extract the rar then launch the game from patriots.exe found in the folder thats all


hope you enjoy and thanks to uthum876/greathan/fpc_css/llhhll/valdemar ;)

Rise of the Moderns Rise of Nations: Thrones and Patriots

Age of Darkness Rise of Nations: Thrones and Patriots

Rise of Kings Rise of Nations: Thrones and Patriots