Project: GoldenEye is a planned twenty level single player mod for the N64 game, GoldenEye. The plan is to have a fifteen level campaign with five bonus levels once you beat the story on the higher difficulties. The story is a mixture of elements of the GoldenEye movie and game storyline, mixed with some new content.

Our goal for this patch was to update and fix a variety of bugs in the two levels that have been currently released.

- Newest additions have an exclamation mark (!) tacked onto the end.

Cheat Options:
01. Full Ammo
Gives Bond maximum ammunition for every weapon he possesses. However, unlike Infinite Ammo, ammunition is consumed as normal.
*How to Unlock: Complete Q-Lab VR on Secret Agent in 9:00 or less.
02. Covert Weapons
Bond starts every mission with a Hunting Knife, Throwing Knives, a PPK (silenced), an MP5K (silenced), and a Sniper Rifle, with maximum ammo for all of them.
*How to Unlock: Complete Dam on Agent in 3:45 or less.

An MI5 operation has uncovered a weapon smuggling operation that has ties to Northern Russia. It now appears that our friends on the other side of the Thames won't
be able to handle the entire operation on their own.

You leave for Arkhangelsk tonight, 007. A supply truck is en-route to the location and we need you to intercept it when it arrives. We also need proof of the syndicate's
activities so be on the lookout for a copy of their shipping records.

I shouldn't have to remind you that Q expects you to bring back your equipment in usuable condition.

Project: GoldenEye is a planned twenty level single player mod for the N64 game, GoldenEye 007. The current goal is to have a fifteen level campaign with five bonus
levels once you beat the story on the higher difficulties. The story is a mixture of elements of the GoldenEye movie and game storyline, mixed in with some new content.

In order to play, you'll need an original NTSC GoldenEye 007 N64 ROM. We suggest using the GoldenEye Setup Editor to patch the ROM as it makes it very simple to
do so. Simply go to Tools > Apply .ISP Patch, select the original unbyteflipped ROM, choose the Project GoldenEye v2-1.isp file, and then generate the modded ROM. Be sure the
name is different from the original ROM. This hack was built on Zoinkity's 8MB GoldenEye hack, so special thanks there! Some of the stuff we are doing wouldn't be
possible without it. If playing on emulator, be sure to have the proper rom settings to take into account the 8MB memory allocation.

We've tested the hack extensively on the EverDrive 64 and on Mupen. We'd like to say the hack is as bug-free as possible. However, if you are able to find any
bugs/glitches, please don't hesitate to let us know. We can be reached at fallenangelfilms@yahoo.com or at www.facebook.com/fallenangelfilms.. Be sure to check out our
YouTube at YouTube.com to watch the latest videos from the mod! We would love to see your videos, too!

We also have a topic at the Shooter's Forever Forum for the project. You'll find that the most up-to-date information can be found here:
Shootersforever.com

Special thanks to SubDrag, Wreck, Zoinkity, and the countless others who have helped in the making of this mod. We appreciate all of the help and we can't wait to hear your
feedback!

LdamE.bin...
Fixed an issue with a text string that wasn't displaying properly in-game.

LarkE.bin...
The briefing text has been slightly modified.
The objective "Collect Mission Dossier" has been updated to "Report to Q's Assistant."

[Multiplayer Levels]
MI6 Headquarters...
Select image for MI6 HQ reflects new level background.
Ump_setuparchZ.bin has been used as a base for this setup.

[Weapons]
Throwing Knife...
Fixed an inconsistency with the pickup text.

Klobb...
Fixed an inconsistency with the pickup and watch text.

D5K Deutsche...
Fixed an inconsistency with the pickup text.

D5K (silenced)...
Fixed an inconsistency with the pickup text.

Rocket Launcher...
The pickup text has been reformatted.

Remote Mines...
Fixed the weapon image for both AR33 spawns.
Note: This weapon set may not remain in future builds.

Timed Mines...
Fixed the weapon image for both AR33 spawns.
Note: This weapon set may not remain in future builds. 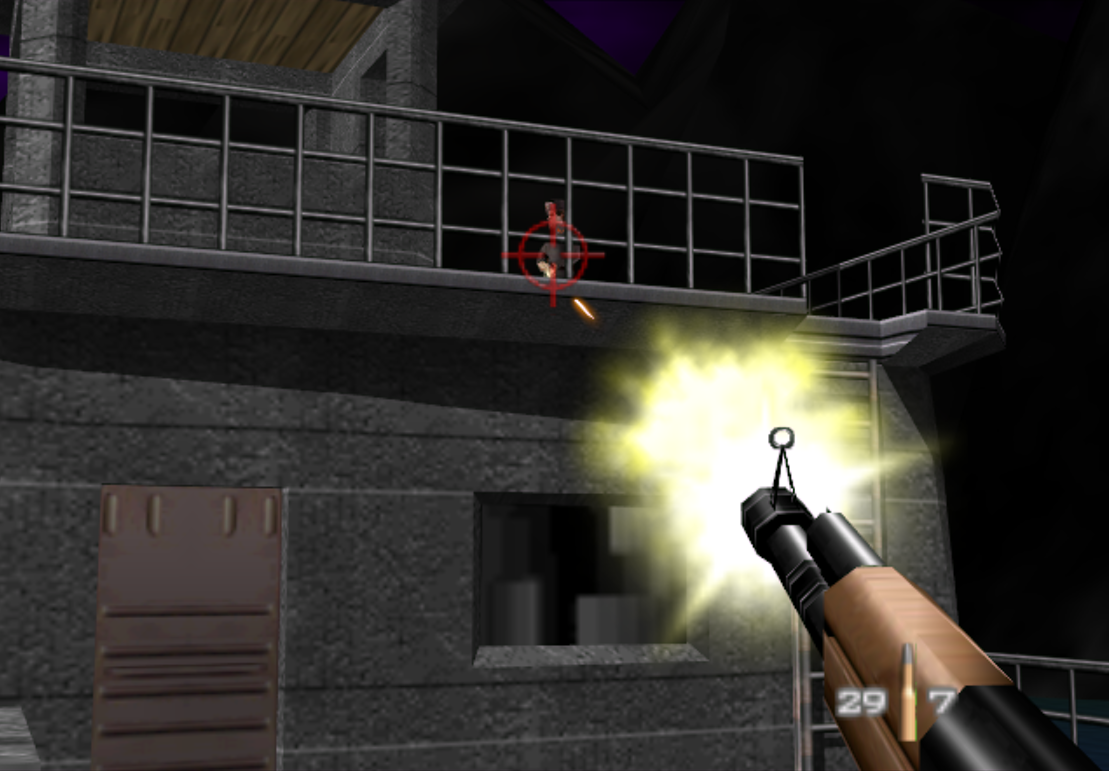 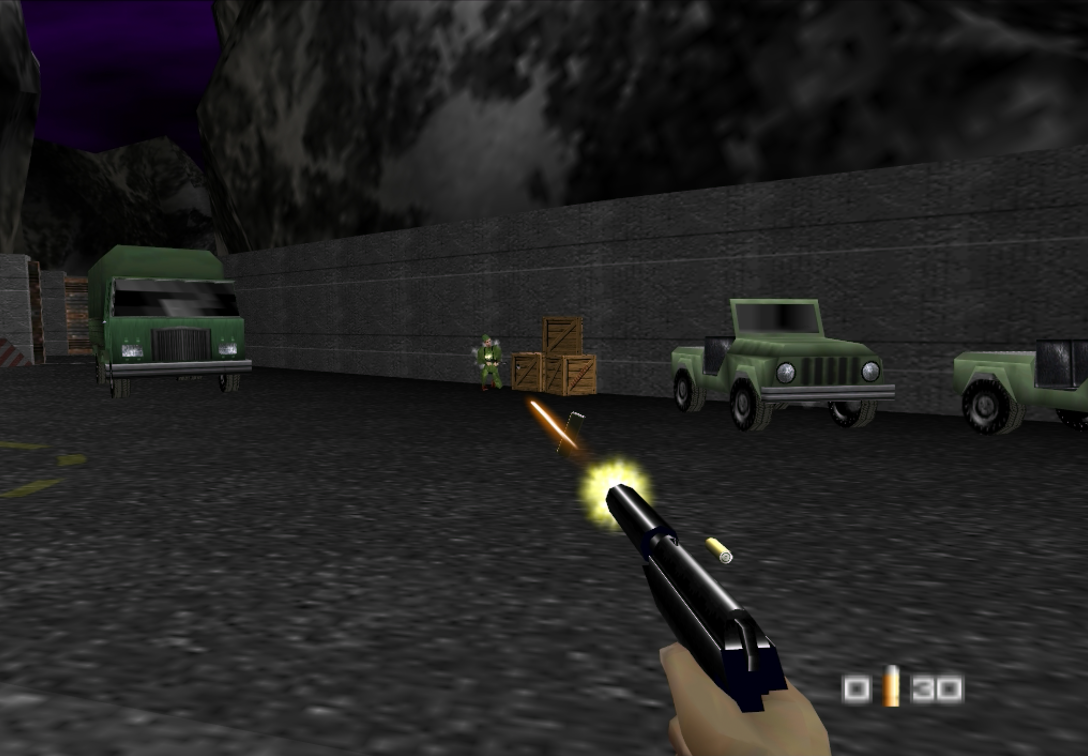 Project: GoldenEye is currently a twenty level single player mod for the N64 game, GoldenEye. The plan is to have a fifteen level campaign with five bonus...

Our goal for this patch was to update and fix a variety of bugs in the two levels that have been currently released. In addition, this new patch will...

The second release of Project: GoldenEye, now including the first two levels in the single player story, Dam and Q-Lab VR! A full list of updates can...

I had been planning on updating this page for a while since we are finally long enough along to start showing off what v3.0 will offer players: new missions and a variety of bug fixes, updates and changes to everything else. From the moment you boot up the mod, we want it to feel different.

However, yesterday we all woke up to the unfortunate news that Sean Connery has passed away. Like Roger Moore, this mod will be dedicated to his memory as well. RIP Sir Sean.

So for now, I'm going to leave the new logo for the mod, supplied by Wreck. More updates will soon follow...

Hi, I would like to know how to play this since it looks interesting, I do not know what to do, please, someone explain to me, thank you, I hope someone will help me !!

Hello, basically you would patch an NTSC GoldenEye .rom with the .isp files included amd adjust your emulator settings to allocate 8MB of memory. This game is console compatible, but you must have the 8MB memory allocation or it will crash on load.

Still waiting for the next missions

We have some awesome things in the works for this project that we are hoping to be able to show off really soon - the next two level setups in the story are definitely more complex than the previous two missions that have been released, so it's been taking far longer to test and create.

Played this with my kids back in the day, tried this out and loved it. Brings back good memories. Cool beens

Sorry, but how to play this ??

The Project: GoldenEye v2.1 download contains an .isp patch. Simply patch an original GoldenEye 007 .rom with this patch to boot up the game. This was tested almost exclusively on real hardware, so there should be no issues getting it to work on there. Only the first two levels are available in this patch. If you have any issues getting this to work, please don't hesitate to respond. I will try to help you get it up and running.

I just wanted to say that what you're doing here is absolutely fantastic. I saw your mod on Graslu00's Youtube channel, and what I saw was superb. I've seen enough user-created Goldeneye missions to know that most of them are trash with little-to-no thought put into their design, and/or have some awfully written fanfiction woven into the ridiculously cringeworthy writing.

I saw none of that in the playthrough of your mod, though. Even though it obviously took place in the Archives level, it was plain to see that so much effort went into making it have its own identity. I came here afterwords to see if there was any more of these amazing levels, and even though there are none and it's still a WIP, I'm glad to see that you have lots more planned. I even like that you're keeping it within the realm of the Goldeneye story by having it take place in that gap in the story between the Chemical Weapons Facility Investigation mission and the Janus Syndicate Investigation. I love Goldeneye a lot, and I think this is a really cool addition to a story we thought was wrapped up in 1997.

Keep up this great work!

Corky,
First - I'm just want to say it's great to hear you're enjoying our mod. It's great to hear this type of feedback as it lets us know we're working in the right direction. Basically we're reworking the GoldenEye storyline - level by level - so in the end, we should hopefully have a completed mod of twenty levels, along with a ton of different multiplayer options, levels, characters and more. Q-Lab VR is an interesting story. Originally intended to be the first level, we postponed it until the second level to give the story a stealth/action sequence to open like the Bond films usually do. The level really didn't start coming together until the vault was implemented and the texture scheme was decided on. While we've been a little slow on updates as of late, the mod is still continuing to progress behind-the-scenes. The next chapter takes place over the course of the next four missions as we follow Bond to Austria. We hope to have something to show everyone very, very soon.

My mistake, I thought at first that this mod's story took place in that gap between the Arkangelsk mission and the start of the Janus investigation, but then saw your comment below saying this would actually be a retelling of the Goldeneye story.

I think that's also good, and from what I've seen so far shows massive potential to be an amazing singleplayer adventure, remaking the Goldeneye experience. The 2010 remake from Activision left a terrible taste in my mouth from what was such an obvious half-assed cash-in on the Goldeneye name with the writing being insultingly dumbed down for the typical Call of Duty audience.

It'll be nice to see a remake made by someone who actually cares about the writing that went into Goldeneye and gives a damn about the story being retold with the care it deserves.

We originally discussed making this a sequel to the game - in an interview recently, Martin Hollis said that he "added a credits sequence into the game, introducing all the characters, almost as though they were being portrayed by actors." We decided that a better approach would be to develop an alternate story that would pay tribute to the best FPS of all time, using the same characters. There will be moments during the story where you will play through events that were only referenced in the game/film. So while the story itself may be radically different, we are hoping that our planned deviations breathe new life into this classic.

I did originally like the idea of GoldenEye 2010 - at first I was unopposed to Craig taking over from Brosnan, but they jettisoned all of the characterizations throughout the story that made GoldenEye a classic. Despite being vastly different, I still think that our alternate version of the story will end up being closer to the source material than GoldenEye 2010.