The Portuguese Civ Mod III is a fan-made modification to Age of Empires II: The Conquerors and the third installment of the Portuguese Civ Mod, that adds 13 new civs and new gameplay features! All of this was only made possible thanks to the help of many contributors!

And, as usual, all of this is packed in an intuitive and straightforward installer!

More information about the Portuguese Civ Mod III can be found at readme, which is included in the download, and also in the official website: Ptcivmod.com.br

There is also a showcase and review video of PCM II made by ZeroEmpires! Do not forget to watch it!

Join the conversation at our official Discord server!

I am glad to announce the release of yet another major update for Portuguese Civ Mod III!

The highlight of this update is the addition of a new civilization, a fan-favourite request from our community: the Polish, with new unique bonus, units and mechanics! Special thanks to Jorgito for the Unique Unit and Support Unit graphics and to Kor Bosch, for the Wonder graphics and history section text!

Even though this addition would be seen as a deviation from the mod’s theme, it is a gift to the wonderful community that has been keeping this mod alive in both ModDB, Discord and Age of Kings Heaven for all of these years!

Besides of that, the graphics for the Light Lancer unit, one of the Feudal Age Trade Workshop units, have been replaced by new graphics made by Jorgito. 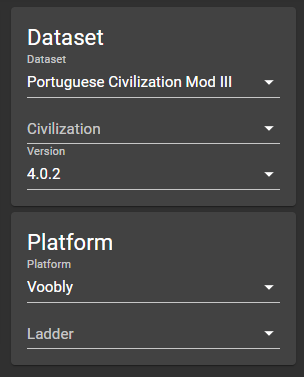 As usual, the update can be obtained at our Downloads section!

A minor update for Portuguese Civ Mod III 4.0 has been released, fixing gameplay and balance issues.

is there any way to add music?such as aoe 2 hd?

Hey i was wondering if you need to get the Age of Kings Conquerors game before downloading this or can i just download and play?

You only need to download the latest version (4.2b), as it contains the full mod.

I only keep the previous versions up for archiving reasons, so no need to worry about them ^^

Thanks! I was also wondering if this would work on the cd of Age of Kings: The Conquerors.

Yeah, the mod is designed to work over the original AoK/TC (non-HD/non-DE) version ^^

Thanks! I'll definitely be trying this out soon it looks awesome!

Hi, there is no team but only the author Daniel. And he is very busy and will not be updating the mod unless some critical error comes up

Loads of innovative new content in this mod. Supplement your forces with mercenaries, access support units in expanded team bonuses, receive a special power when you build a wonder, access a variety of powerful upgrades and artillery in the Renaissance age, use redone scout units with special abilities, and explore a slew of new Iberian-themed civilizations.

Stop reading reviews and check it out!

Dawn of Rome Age of Empires II: The Conquerors