For those who played Off Limits already they'll remember the central spawn was on top of a container ship. This will still be the case, except now it will be an even bigger ship where you can now drive through and get inside the ship cabin. There will now also be two parked vehicles inside the ship for the team that captures it to make a quick escape or attack to the next spawn point. This is all still work in progress, but I recorded a development video while working on the ship interior.


Here are some screenshots of this new area: 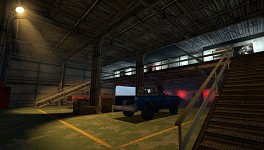 I hope to have this new final version ready sometime next weekend. More updates will follow shortly!

Wow. Don't you think 1 door is too much of a choke point for access to a capture point though?

There will be walkways up on the side of the ship as well (like in the previous version). This is mainly for vehicles to pass. And no I don't think it will be a choke point, it's better to compact the action in multiplayer games rather than to spread it out and have a boring experience playing it (depending on the multiplayer game type of course :) ).

the music later on made me smile

If it did you should check out the channel of the guy who made it:
Youtube.com

What was the second program you worked with? And why didnt you make that model in hammer?

3Dsmax and it was way too complex to build in hammer.

keep up the good work. XD