Space themed mod OpenRA, where you control a fleet that is completely mobile.

So, it has been a little more than a year since the first announcement of this project, after that, progress slowed down due to some problems, design issues, engine limitations and most importantly, the need to spend my time into my university thesis, all of this made me pause development, but now after resuming work, I want to mention the changes and progress that has happened so far.

The first big area was the fleet construction and teching up system, here I went through four different systems:

The first method was classic CnC, where you deploy buildings around your mobile construction vehicle, this was the safest bet but I rejected it because it would turn this project into a clone of the official mods.

The second method was more than inspired on the homeworld games, you would have one mothership along many carriers that handle production, and all the teching was done with a research system, this idea worked, for a while, but made teching too simple, there werent enough targets to take down, and there was no way to remove the research of the oponent (unlike when you take down a radar in CnC), finally, this also lead to an hypermobile fleet that removed all the borders in a game, making it… strange, so I had to change the system again. 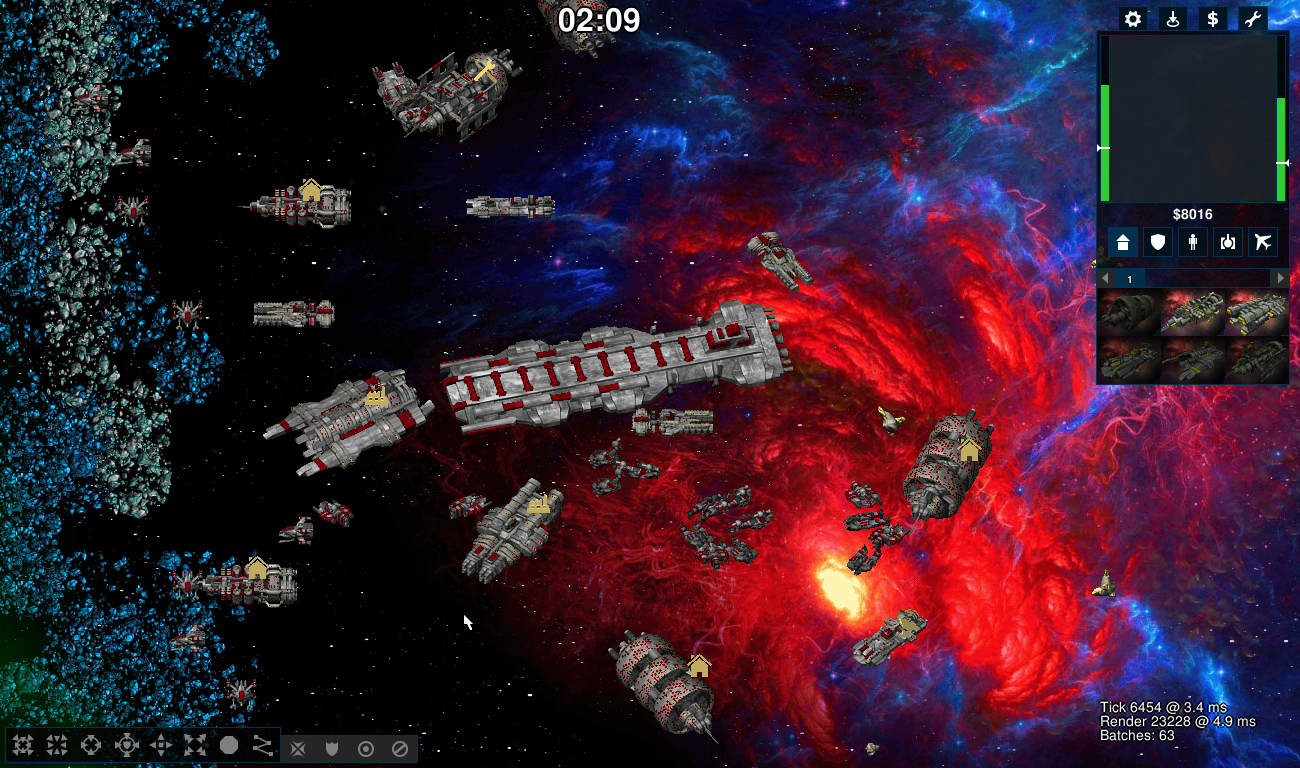 The third option was a merge of the two, where you would have a fleet with mobile economical ships, and would also require to build key facilities on planets, I rejected it because it was too hacky, felt arbitrary and forced players to remain on one spot, resulting on something similar to what was done on the first Lord of the Rings RTS. 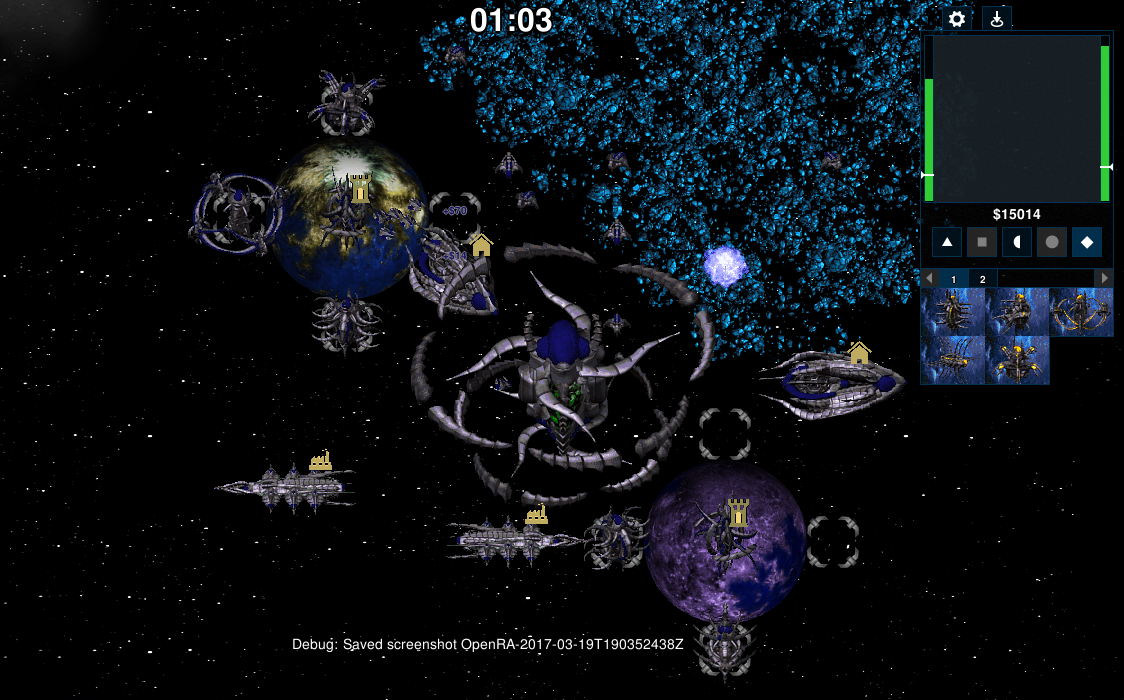 After all these tries, i left this topic on hold, until I found that MustaphaTR managed to replicate the Overlord upgrade system from Generals, with that, and some extra feedback, i made a new system, similar to the Empire of the Rising Sun from Red Alert 3, this was the key detail that made me resume work on this project.

Players would build core ships, blank vessels that could be customized after being built, these would apply their main function once they are ordered to deploy, becoming static in the process, players could undeploy their core ships at any time, allowing to move them as they see fit, but loosing their functionality.

Basically, this reduces the amount of freedom the player had, but helps make the game more understandable and allows for other key components, like rally points, later on in the game, you will be allowed to build support structures like a warp gate, which allows instant travel between two points, and a sensor array, that would allow you to find where your oponents are, this to avoid hide and seek situations, superweapons are also planned, but I preffer to go one step at a time.

Another big change is unit movement, I started using the Aircraft trait, which allowed for free movement around the map, but had some limitations, like having all selected units gathering at the same spot after a move order, or having them ignore blockers and go straight to their destination. 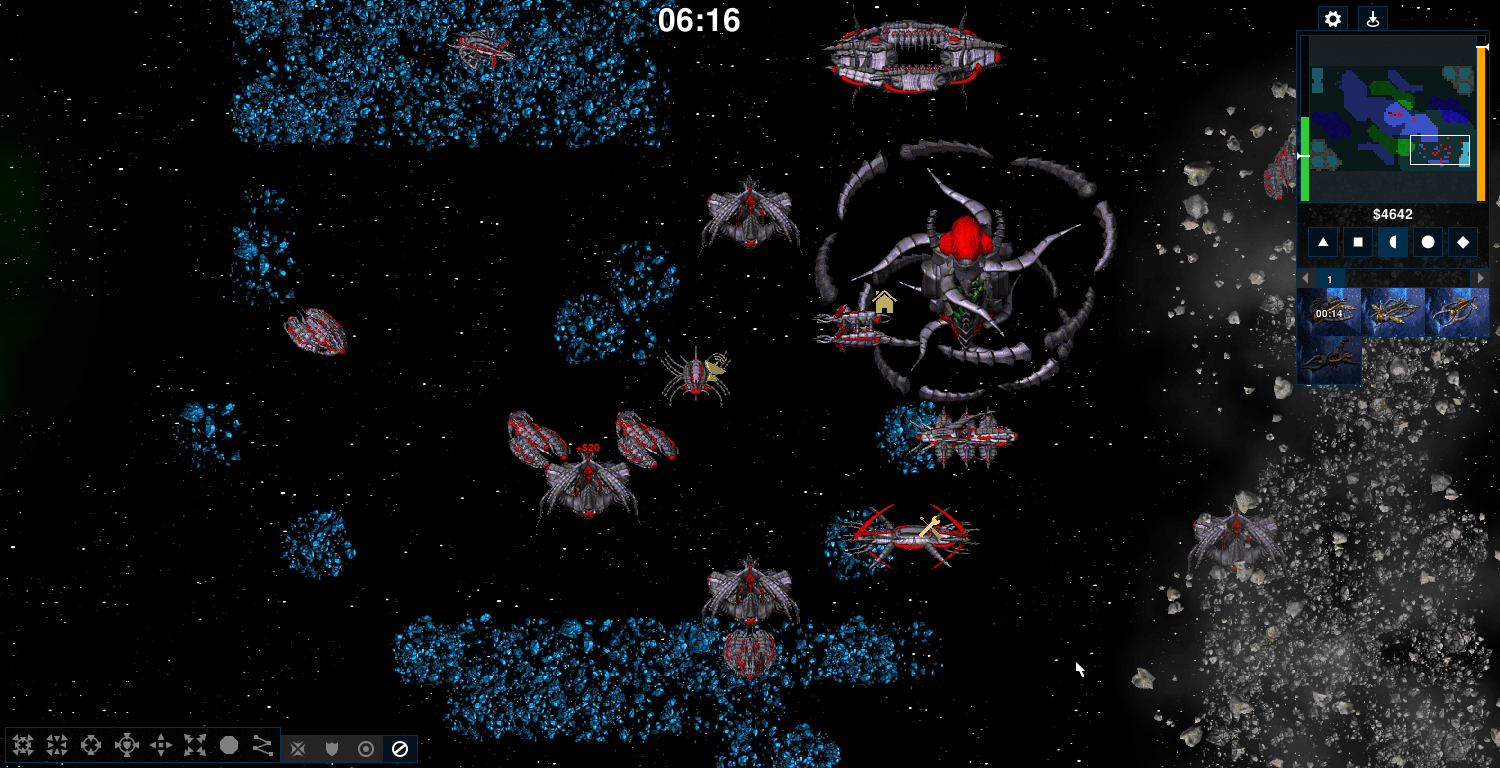 These limitations are not good for the game because first, damage in OpenRA is applied to the area and not the unit, meaning many units can be hit by one weapon if they are close enough, on the other hand, it also led to death ball situations, why would you spread your forces when you can gather everything on one spot and steamroll? the end result is this movement type was reverted later, now frigates and corvettes move similar to OpenRA tanks and infantry, but the fighters remain using the Aircraft behaviour.

There were a few minor changes to the combat system, mostly the armor types change, that went from the usual CnC method, where the wrong weapon deals almost no damage, to something more close to Starcraft, where the wrong weapon deals atleast half of its damage. On the other hand, there were some graphical weapon polish, thanks to Voidwalker, I managed to make bullets pass through the targets when missing to simulate the lack of gravity.

Finally, some targetting priorities changes have been applied, which aims to make units engage what they are best at, reducing micro on a game where some units move too fast to target manually.

Another thing to change was map design, while originally maps were intended to be completely traversable, the result was that the levels were very boring, since there were no chokepoints, and there was nothing to design, the nebulas that only modify stats dont bring enough to generate an environment, so instead I decided to simplify things a bit, and add a blocker, that is the green cloud for now, gray clouds provide resources, and the blue ones serve as hiding spots. 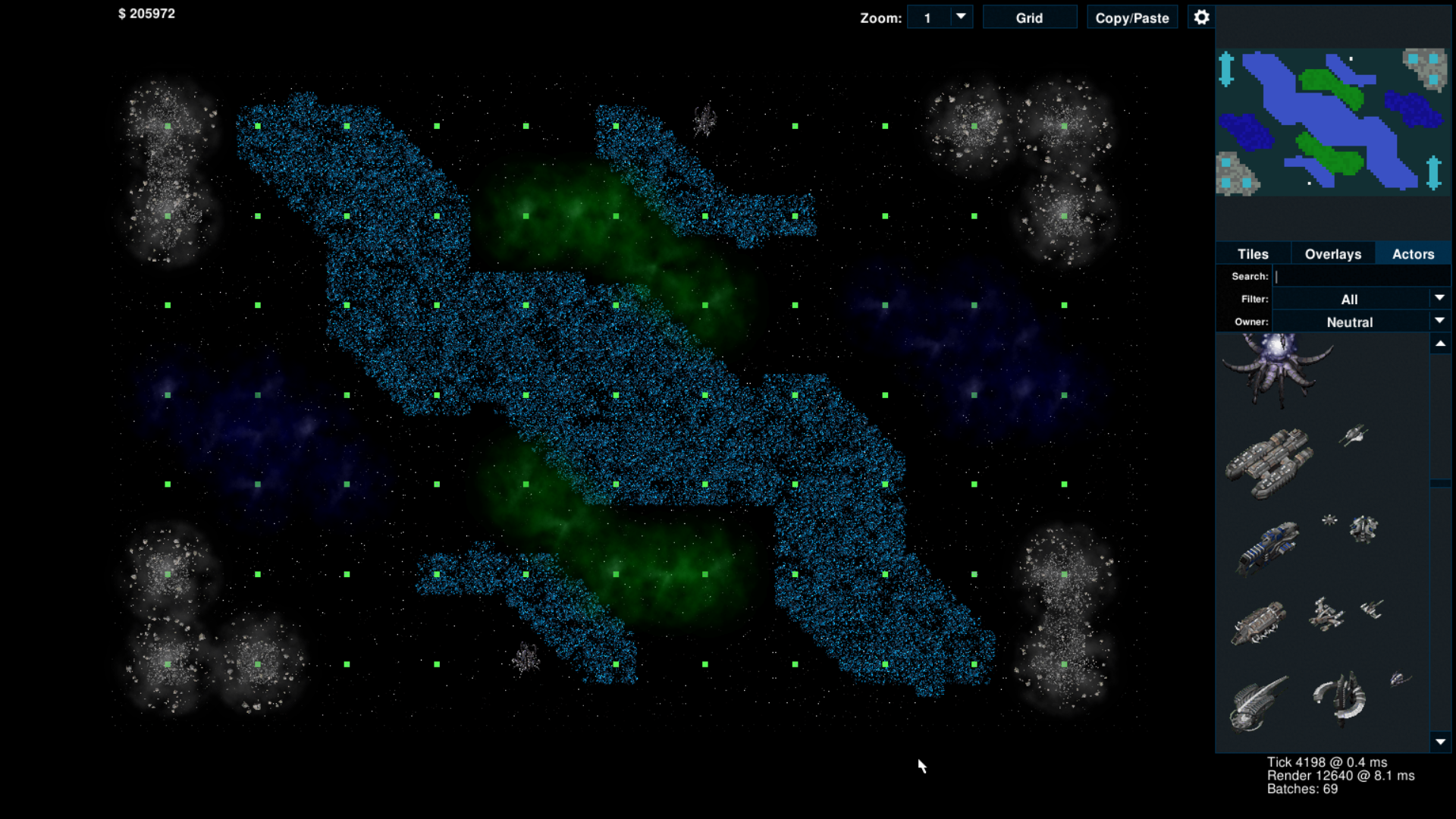 After all this work, I finally believe the mod passed from being an experiment, to an achievable project, it might not replicate the space setting completely, but it is enough to bring a different type of game into OpenRA, and that is enough for me.

I believe this is enough for now, next blogs should cover faction design, mercenaries, tech structures or more map design, depending of how things go.

First announcement for this mod, where I describe what it is about. WARNING: GIF EXTENSIVE.

Press F to pay respect to this one...

First of all this seems to be a very neat project. So all thumbs up on this. Is this project still alive and will there come any kind of playable beta material, maybe?

this is amazing, you are onto something here, keep working on it, have you considered experimenting with making a seamless map?

Cant, the engine was not designed for that.

Still excited for this :D

Busy with my thesis, I got a test build I share with people that ask on discord, but I am not releasing for a while, I need to finish the Terran faction first and work some issues.