This mod got it's aim, to make your game as realistic as possible. It's not about to change the whole game, only to add some features or to advance established things. My objective is it to keep everthing historical as possible, to give you, the players, the opportunity to chance the process of the history of the 2nd World War realistic. I created and create this mod without any foreign help. (Except my brother for this translation) Innovations contains of ... New countries ... New units ... New events/decissions ... New GUI-Effects ... Alternative storylines ... New sound effects ... And much more ... 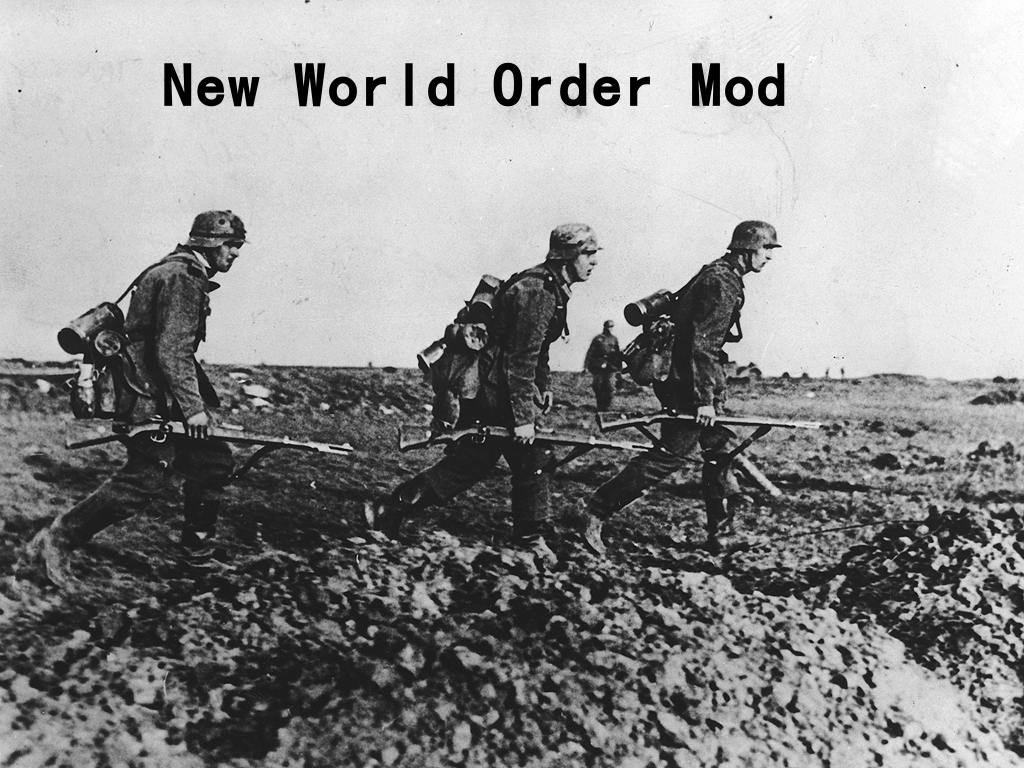 Release of the newest version of the New World Order Mod!

It's time to give you the oppurtunity to play with my latest update to test it and report as usual bugs. I would really appreciate it when you would leave a short comment here to show me ur support or to tell me which bugs you found.

This update takes mostly part in asia, exspecially Japan, China and Thailand. Besides this some GUI changes were made to increase the historical atmosphere and like always some bugfixes.

The next update will be an unit update for countrys like USA or Germany too add new units or optimize them. I also have some plans in mind the make the invasion of the USA more challenging.

At least you can now read the complete changelog to see which changes were made.

NOTE: Many event and descision texts are still missing. Somewhere in the future i add them but now you should be able to see the point of them just with the title and option texts.

Reworked version of the first version of this mod. Include many bug fixes (austria, uk), new oob's (french african colonies, vichy) and new songs for...

This is an very early version of the mod. Many things are missing or still unfinished like events, texts or leaders. This should only give you a little...

It reminds me the Historical Plausability Project mod for HOI 3. I hope you'll use that mod for base or historical accuracy.

That would be very cool.

I've never played HPP. But I promise you it's very historical accurate. I don't have a base for my mod, I've done all myself with hours of research.

When is this mod to be released? i think its very cool. and i always like people who add more historical accuracy to a game.

I thing in the next days i could upload an early version. Not all events are working perfect at the moment but its playable.

Thnx for the quick reply :) i hope it will be awesome :)

Hi, how do you install this mod and get it working for HOI3: TFH? Thank you :)

Just go into ur folder where u installed HoI3, put the zip folder u downloaded into a folder called Hearts of Iron 3\tfh\mod and unpack there. Now there should be a folder called New World Order and a .mod file.
Now just open the game and at the launcher and activate the mod.
Hope this could help u :-)

Hi,When can we expect version 3.0 ?
Godspeed

At the moment i working in full speed on it. The new version i can say is mostly just for asia besides some bugfixes. But i still need like 2 or 3 weeks for it.
But in the next days i could upload some pics to show u what im working on.

In English: That Mod look interesting - is there an Option to play it in German?

Is this based off the New world order mod for Darkest hour HOI game?

No, i designed it all by myelf

What if we(I) cannot read the german events, is there any importance, or are they just little facts added on that do not impact the game? I only ask this because I find intrest in reading events most of the time

Well most are just existing for the atmospehre. Just a bunch of events like the four-years-plan have a bigger impact.

Can we have an english translation for all the countries?

hi, which is the song of the beginning of the mod?
sorry for my bad english

Can you disable the faction auto join system? I was playing and git forced in to the soviets cause japan declared war on me...

East VS west The hearts of iron w/HI3 Engine Hearts of Iron III: Their Finest Hour