This is a singelplayer and multiplayer modification for Mount and Blade:Warband. It covers a central theme of colonists versus tribes, with tribes taking inspiration from anything from aztecs, neolithic tribes and comanches/apaches. It is based in a fictitious land on an Island called New Elgante which is occupied by seven factions. The mod aims to convert the native world to this new setting.
Taleworlds Thread

-A New World Map - I plan to expand this with more islands-
7 new factions:
Elgante Empire
Tribe of Snakes
The Karkans
The Rebels
The Lundmen
The Arlen Barony
The Arlen Tribe
-207 new items
-New Character Creation Options
- Complete with background, skills and equipment
-New Scenes - Plenty of new scenes, both singleplayer and multiplayer.
-New Startup Quest - It is just a re-skin for now but I hope to make it lead to a full storyline.
-Three new Companions - With background stories!
-Firearms - it seems every mod has these, enjoy.
-New banners - thanks to Mark Quinn-New Mercenaries - I plan to add more
-Almost completely changed UI
-Lots of new Music
-New animations: thanks to papa lazarou
-Nine completely new multiplayer scenes with more to come
More Metal Sounds Mod: thanks to checkmaty
-Camp Entrenchment
-Construct-able Outposts
-Textures have been redone: new skyboxes and improved buildings by sendmesmile, real water by cptjoker, new grass originally by painbringer but I have edited it alot and expanded horizons by openshaw
-Factional Merchants
-Garrison-able Villages
-Ability to create your own vassal titles
-New Skill: Foraging - thanks to jrider
-NPC interactivity - I aim to make tavern and town visits more interesting with new NPC's, currently this is only partially done. But enjoy
-Completely new scene props- that make up the new scenes, adds to the immiersion-Troop trees redone from native for all factions

This is a "diary" entry of a priest who resides in one of the larger colonist towns
18th of Welence in the reign of Emperor Laden second of that name since the formation of the Empire, Year 142 since discovery of New Elgante.
The colony reels after a shocking raid made by the filthy tribe of the mountains upon the small town of Hamgild, most inland settlement. Talks of abandoning all towns and villages which are not at least a day and a half from the coast are being discussed. The Duke of Port Horizon has offered to campaign upon the barbaric tribe and bring them to justice but little support for this has been forthcoming. The Arlenmen which have so far proved trustworthy towards the Empire and its interests are proving reluctant to take action upon a tribe which has been neutral to them. The Rebels grow in number each day as the scum of Elgante fall victim to the promises of their false ideals, they burn every book or script they find which contains any mention of the good and righteous Emperor Laden. The last ship which was sent back to the mainland has not returned in over a year, just like the one that preceded it. Fears are growing among the populace that the colony has been abandoned, both by the Emperor and by God, since no contact has been established in the past seven years. With more and more atrocities like the raid happening each day, I confess, with a heavy heart, not even I am immune to such misgivings. Lord Halrod of Hamgild has been reported to have been captured by the rebels after he survived the raid. No ransom message has been received as of yet. I hope that support from the Arlen tribe is given and the good Duke of Port Horizon can make a successful campaign to show these worthless barbarians and natives who is the one and true god. But most of the colonies money is being put towards horses, since the number of them severely dwindle and now it is a very uncommon sight to see anyone who is not of an upstanding rank to own a horse. I sincerely hope that a fleetis on its way to the colony even now and that the support it brings will help restore the glory that the colony of New Elgante once knew.
Signed Priest William, Silvershore

I have been working on making some tropical flora to go with the less temperate zones covered in my mod. Namely the Tribe of Snakes and the more southern Empire Colonies (Note the compass in the mod is currently pointing to the east as if it was north, I mean to fix it). 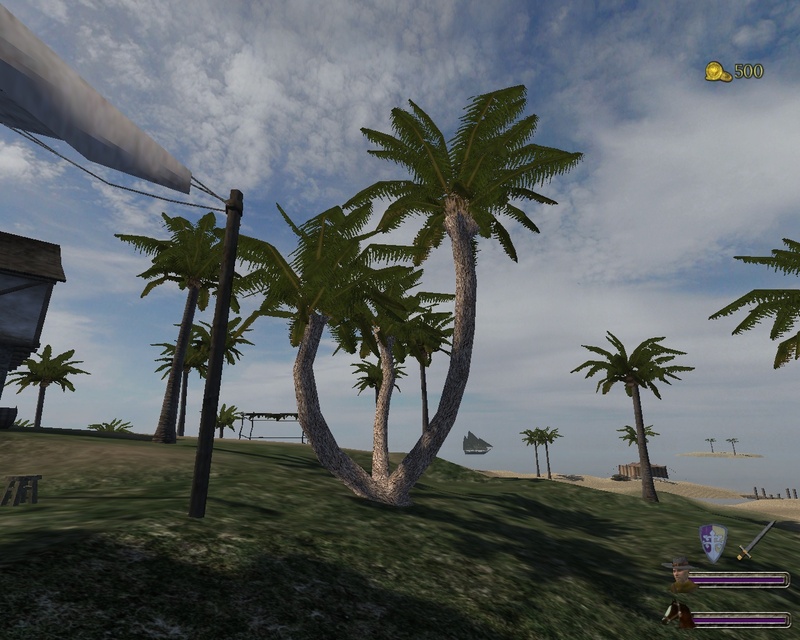 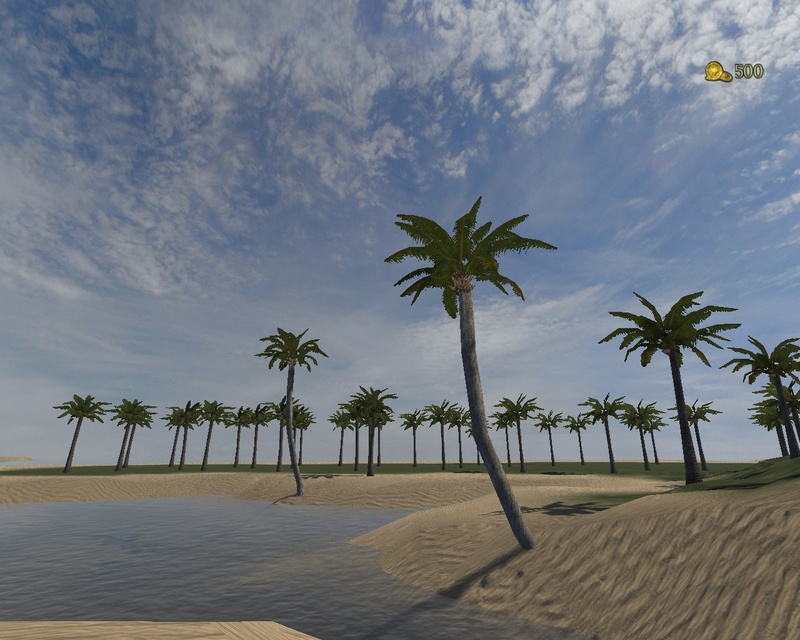 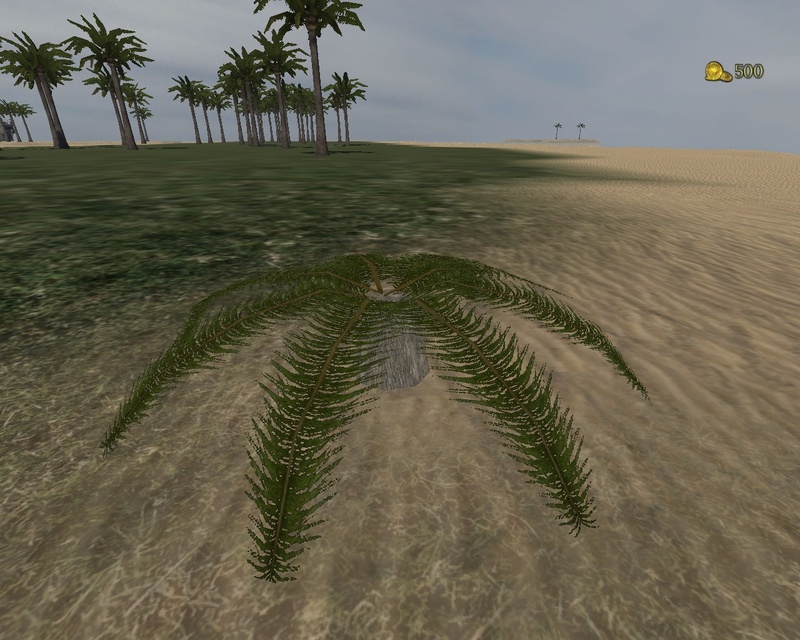 Thanks to a new Team Member, "Angry Newbie" who has contributed over 40 scenes to my mod I feel very happy about the mods current state when it come to exploring the map. Here are a few of them. I myself have made some Karkan scenes, but none of which I think is worthy if this epic gallery! 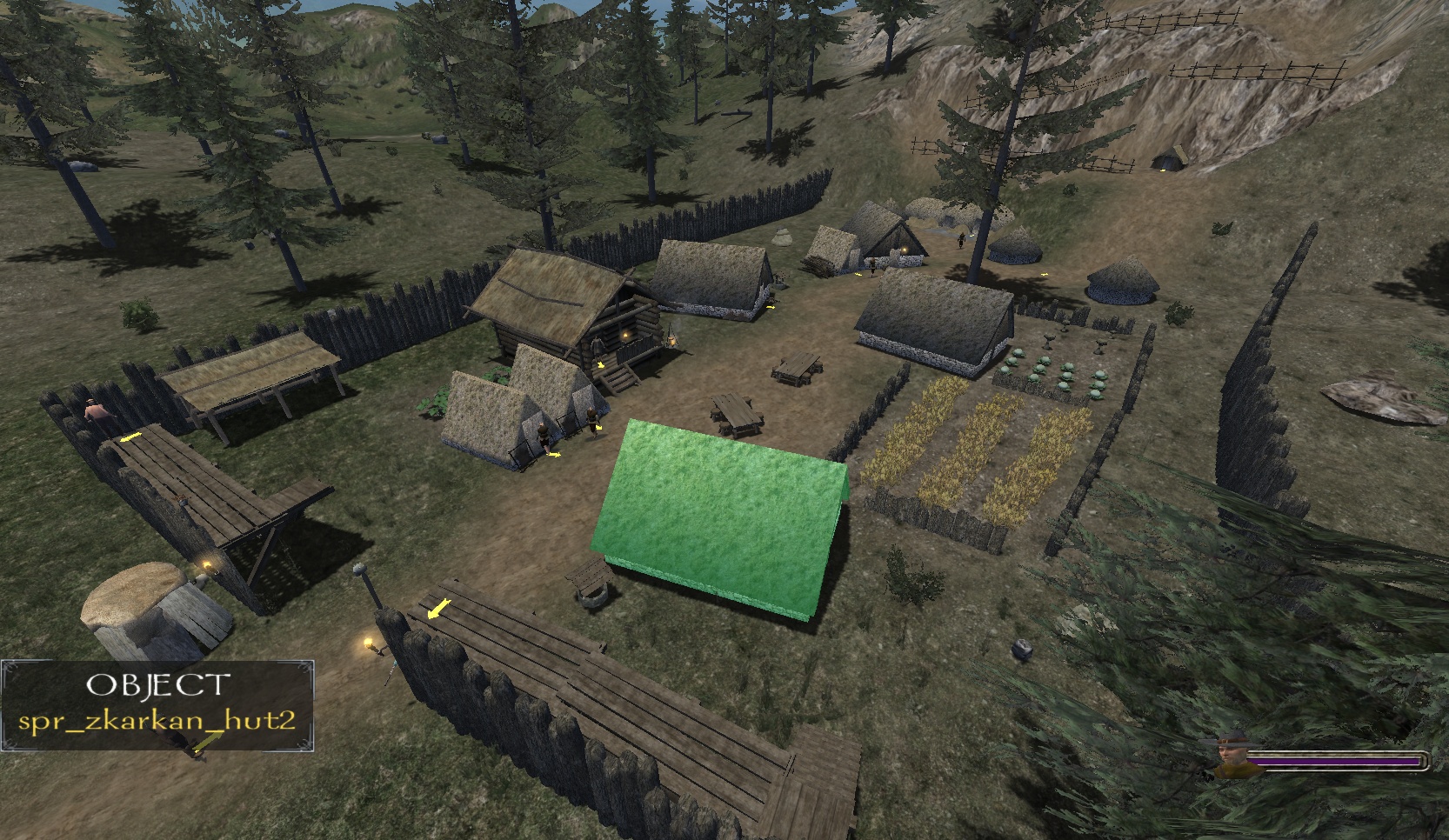 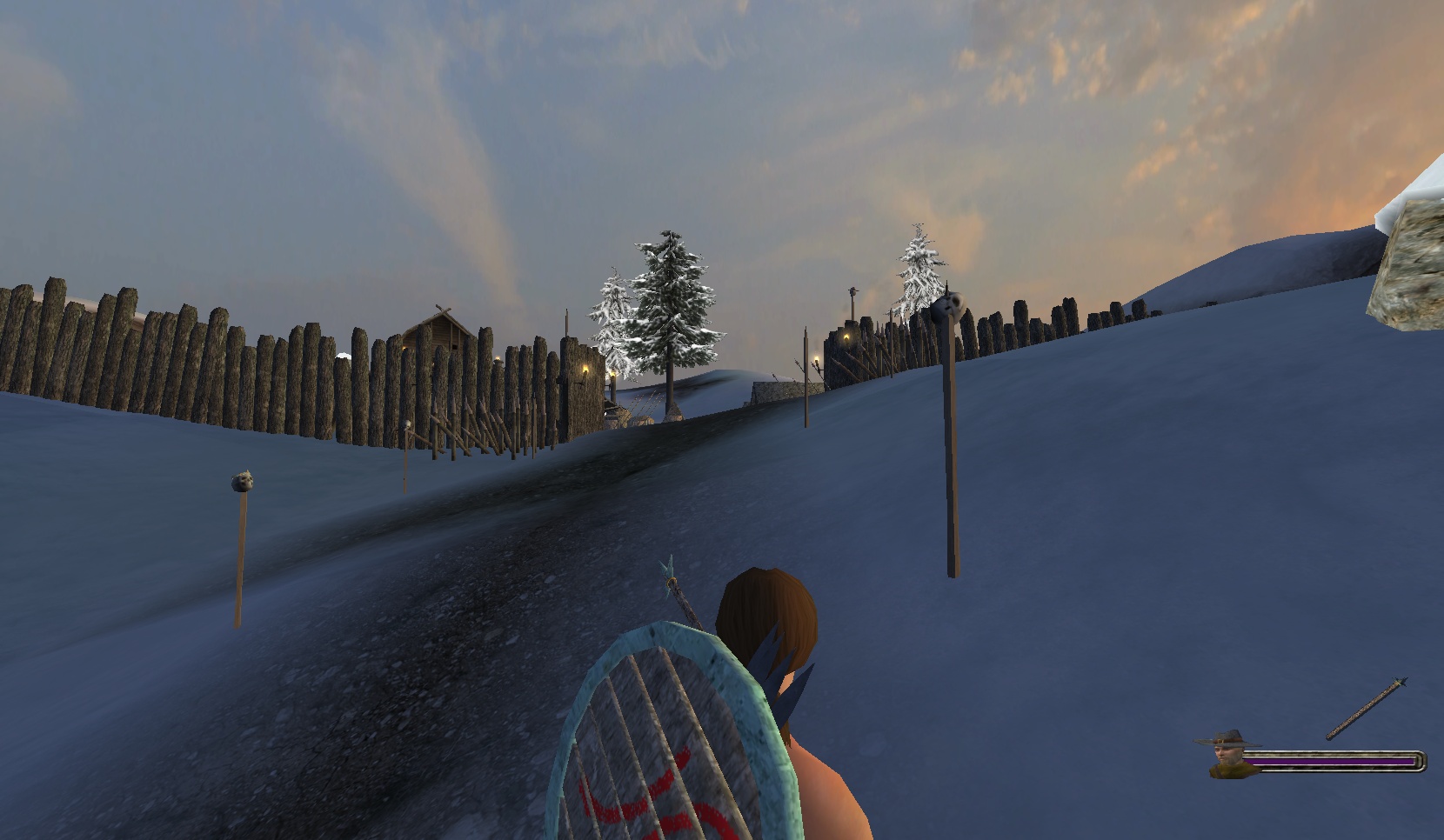 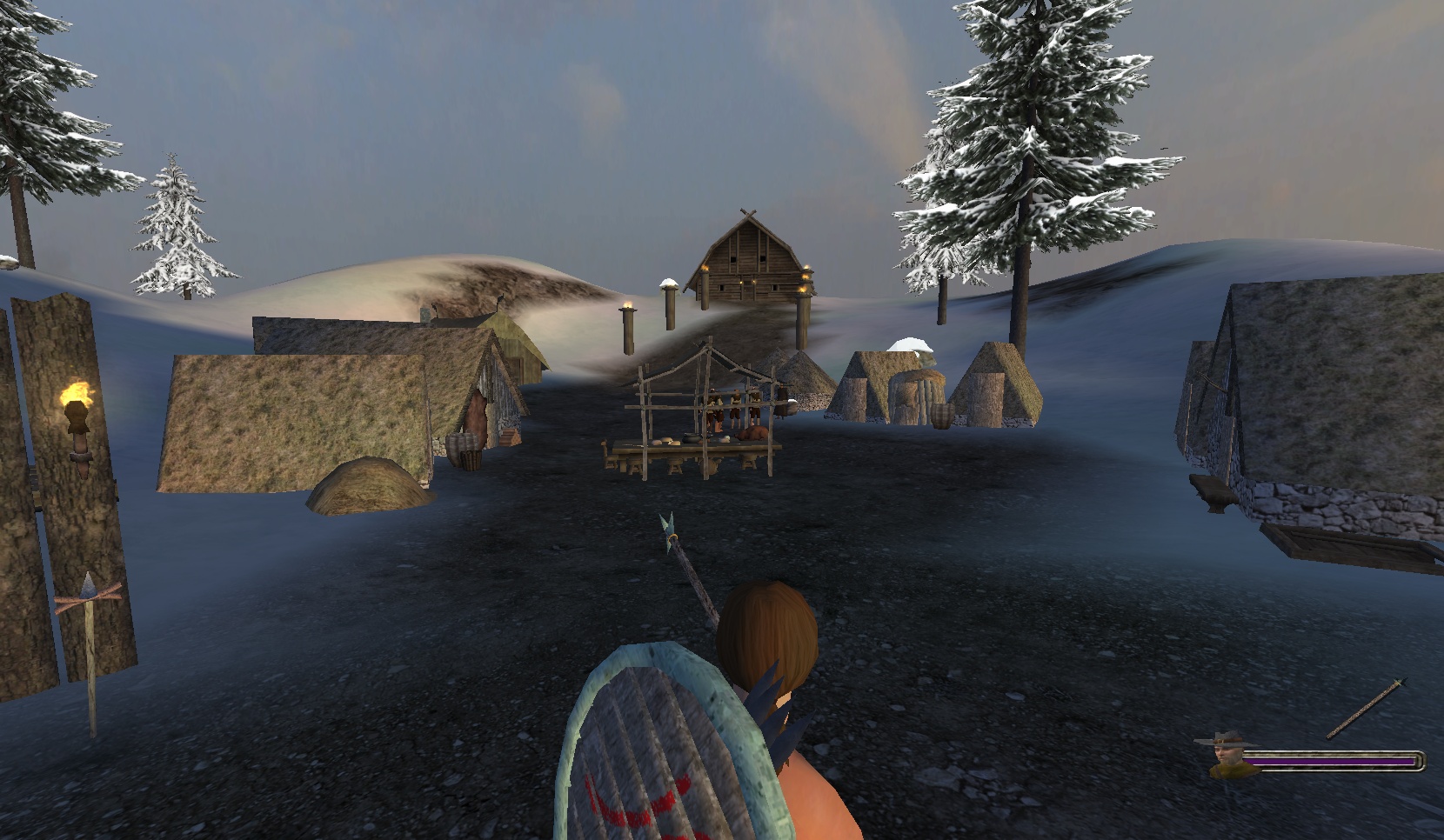 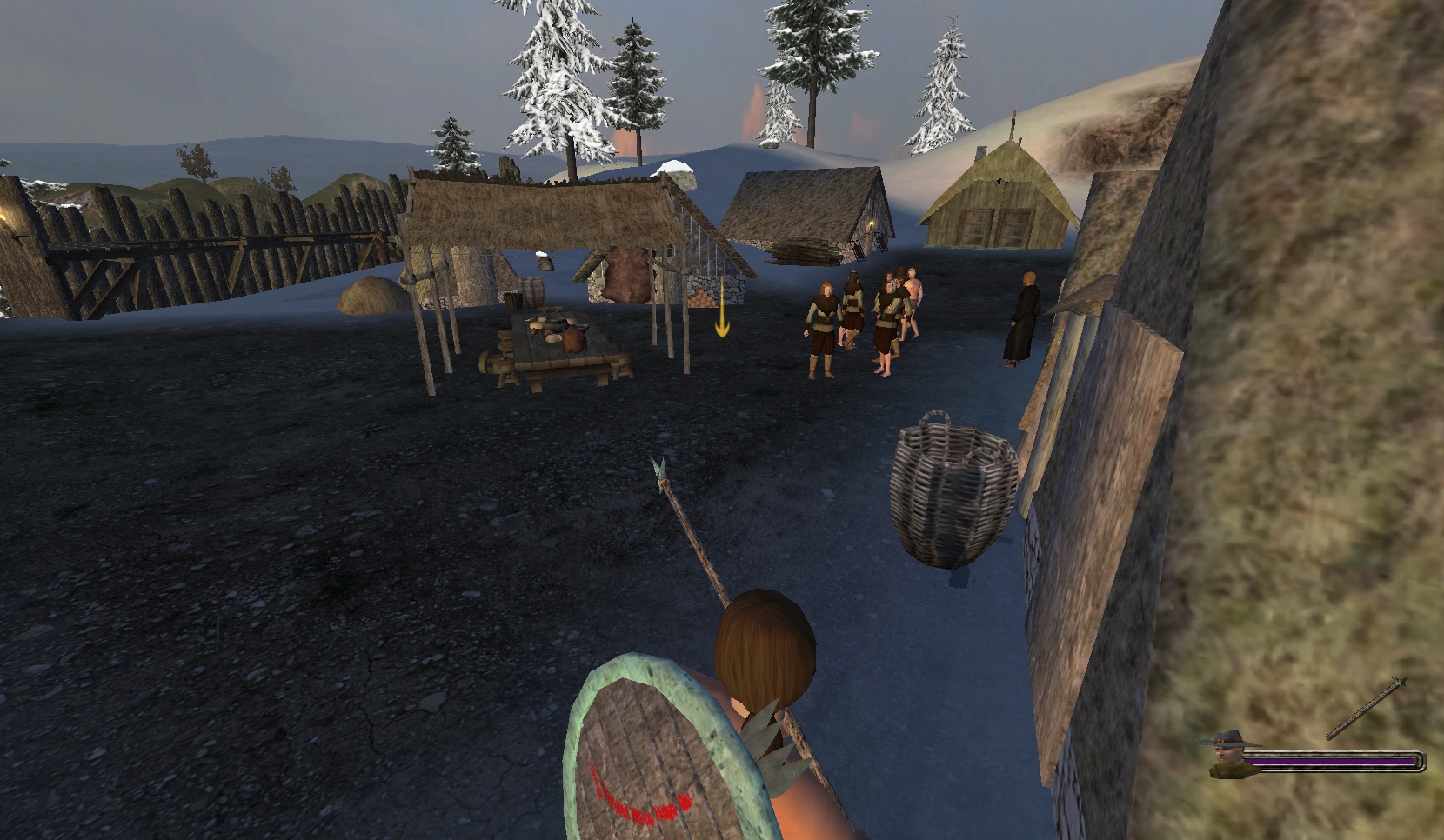 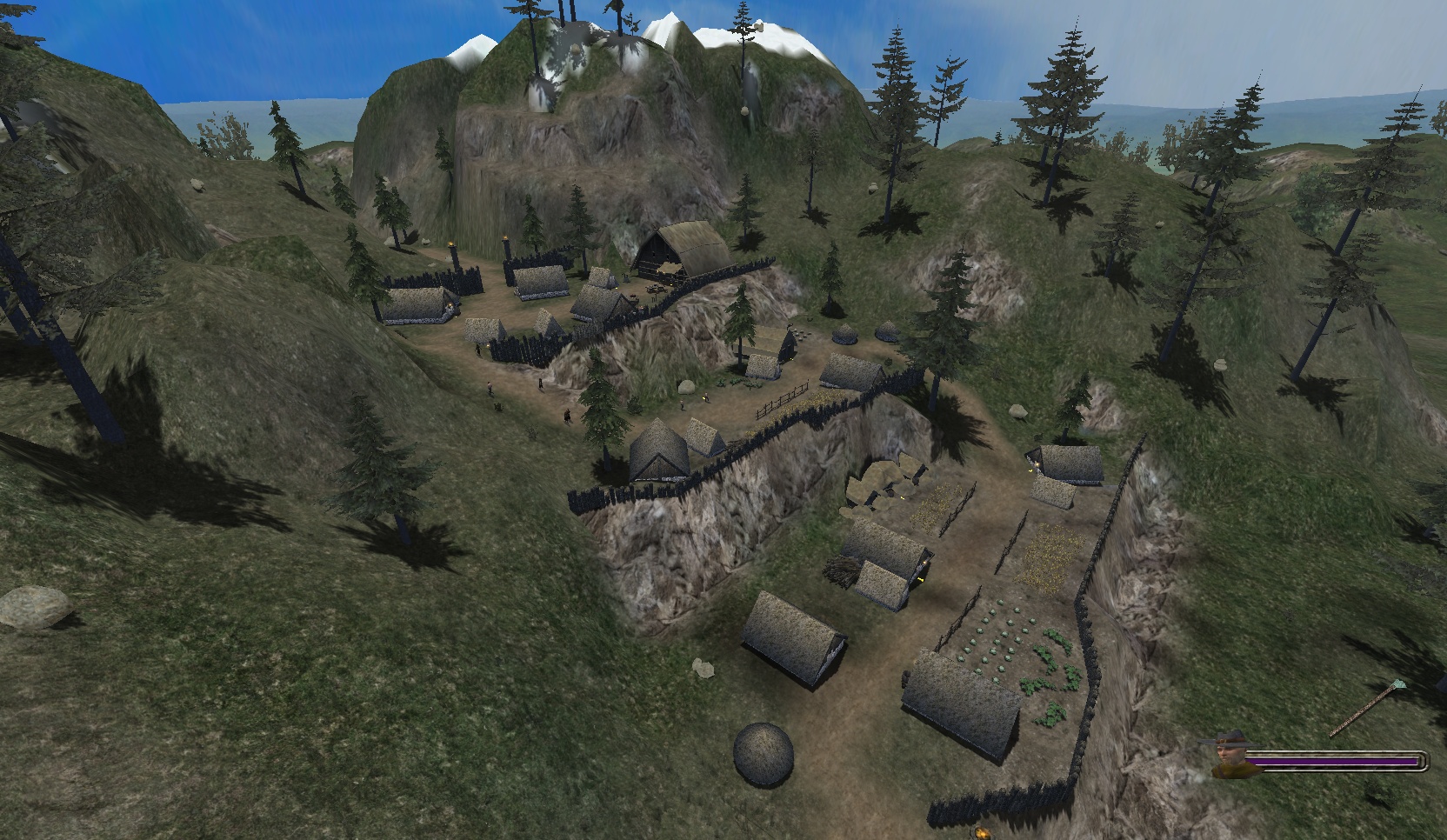 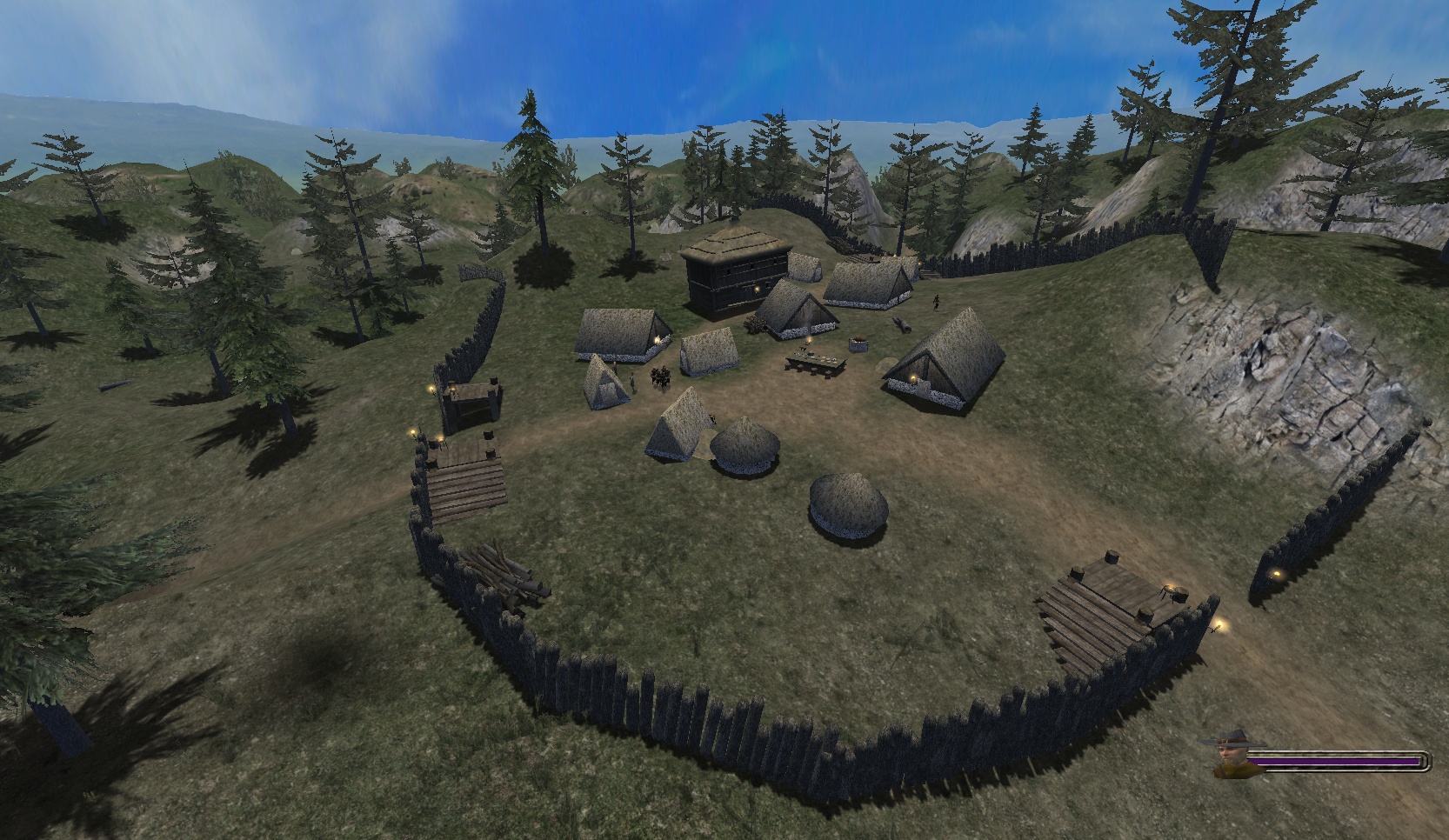 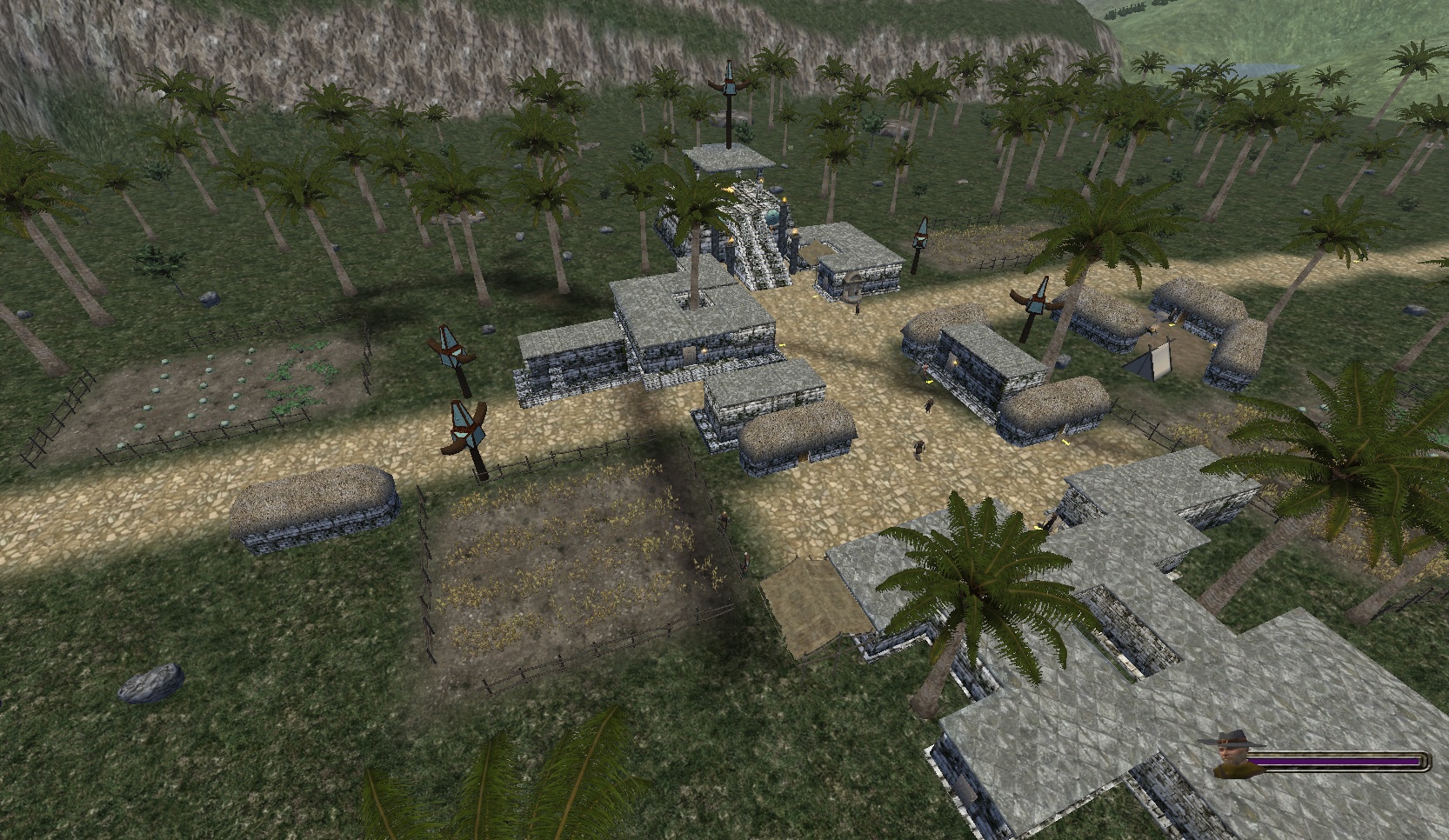 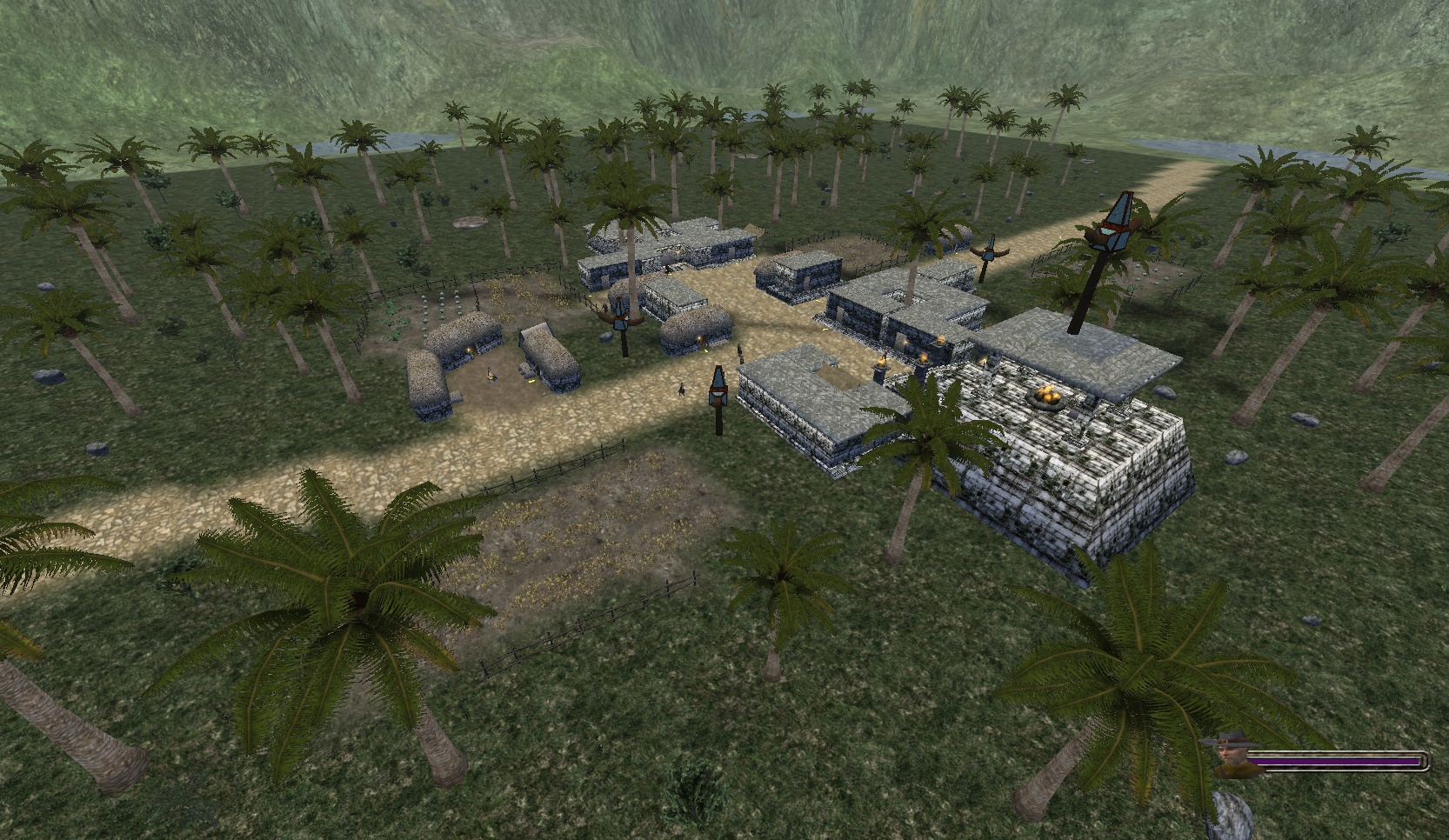 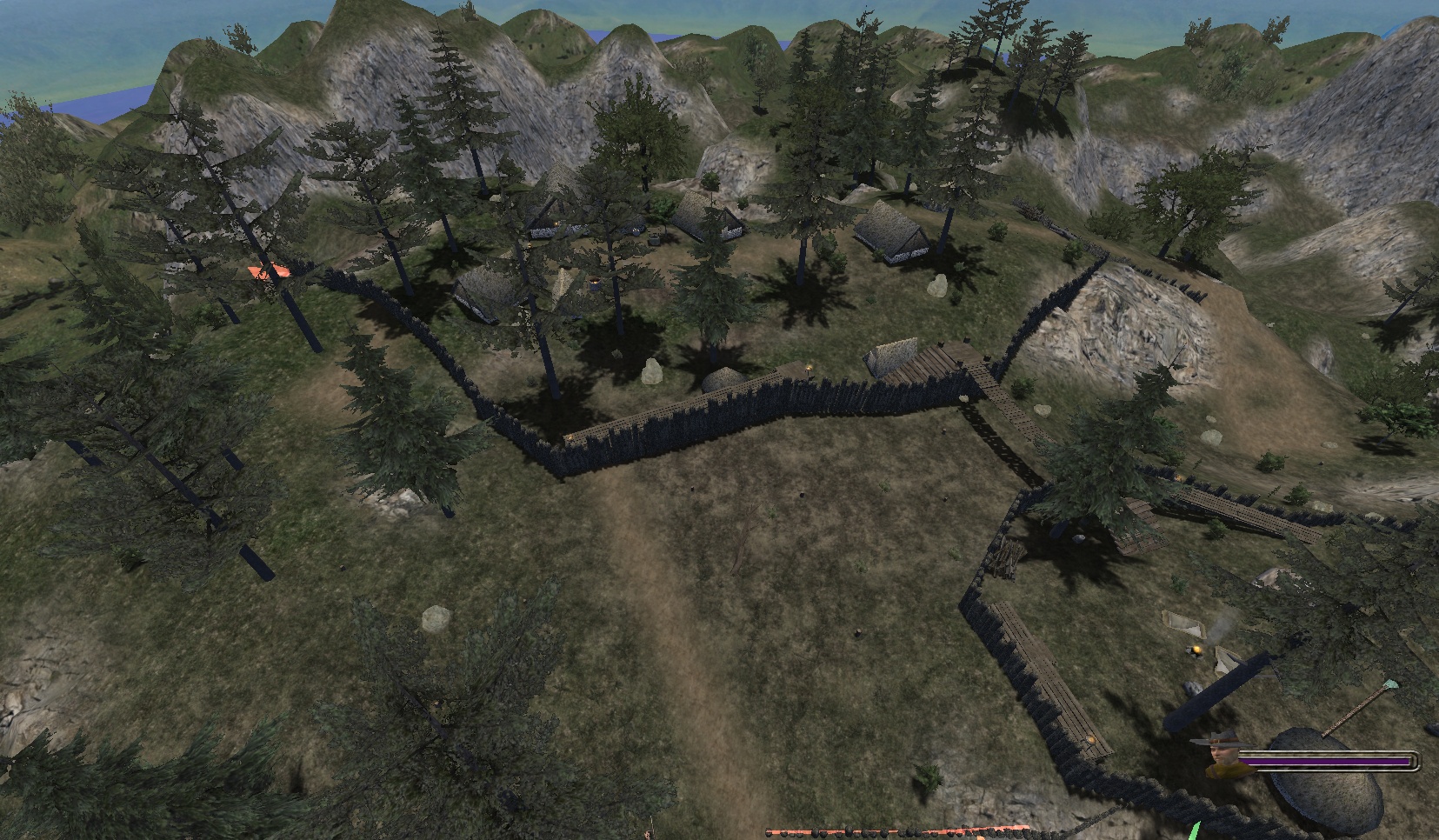 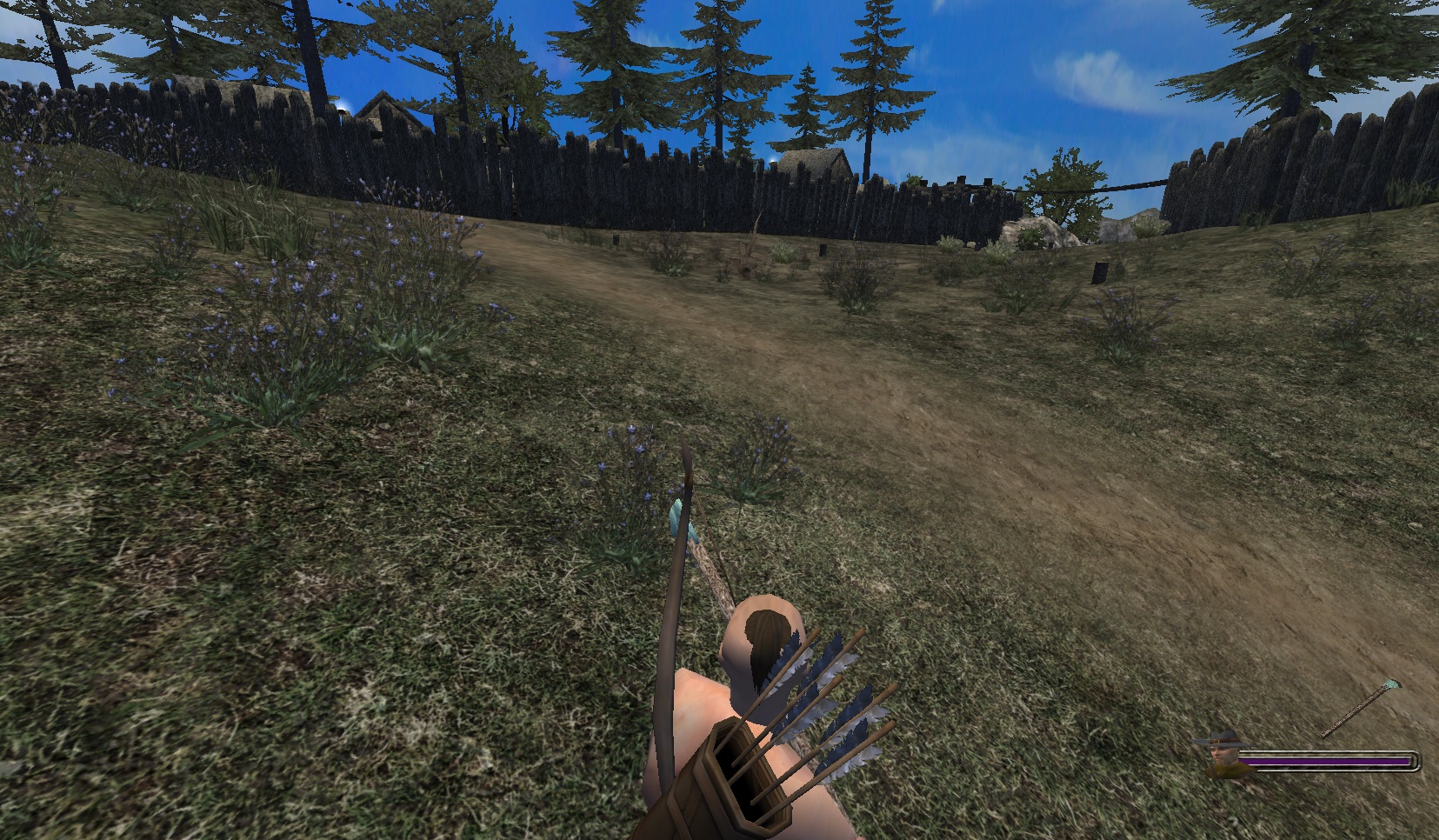 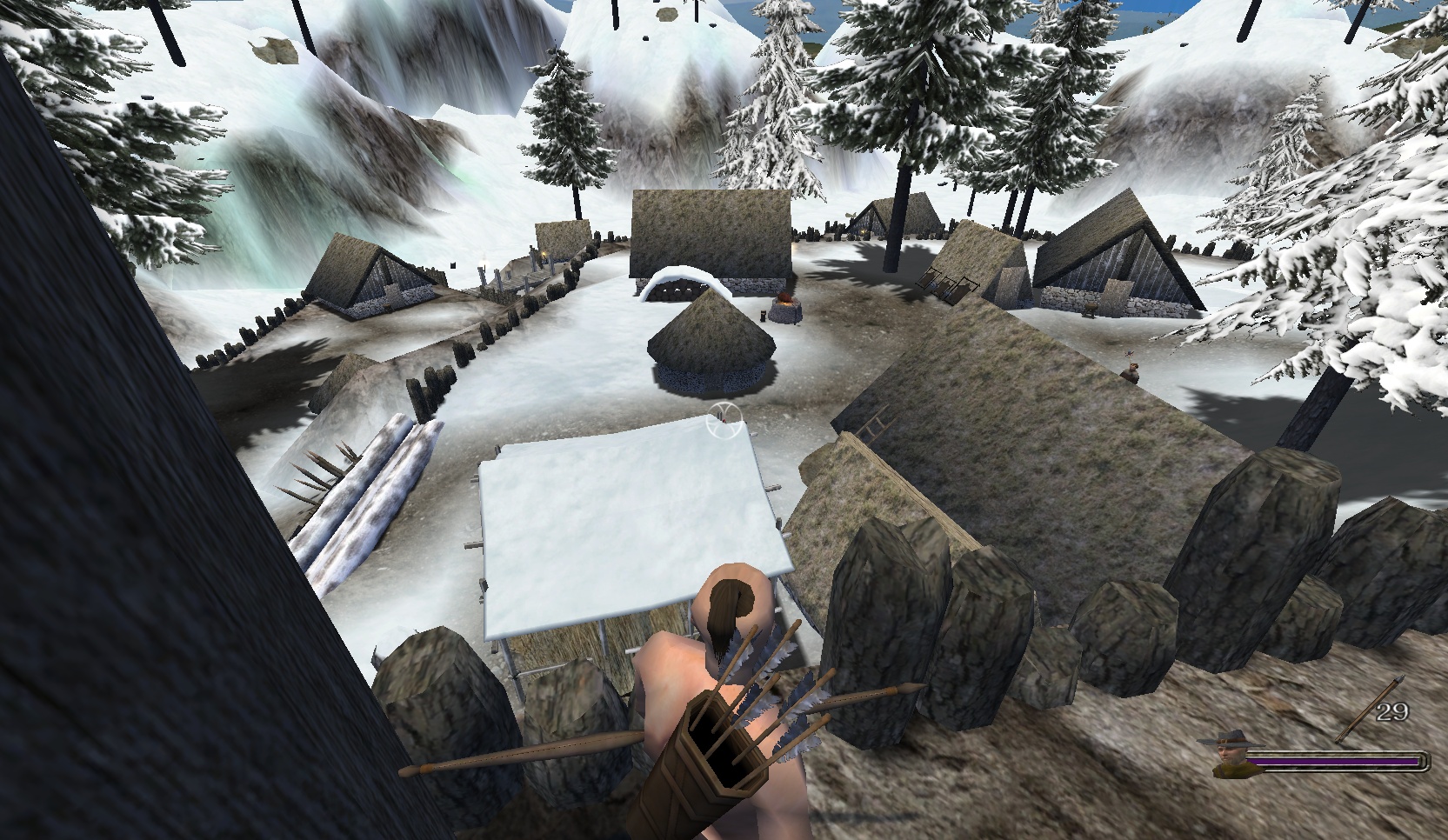 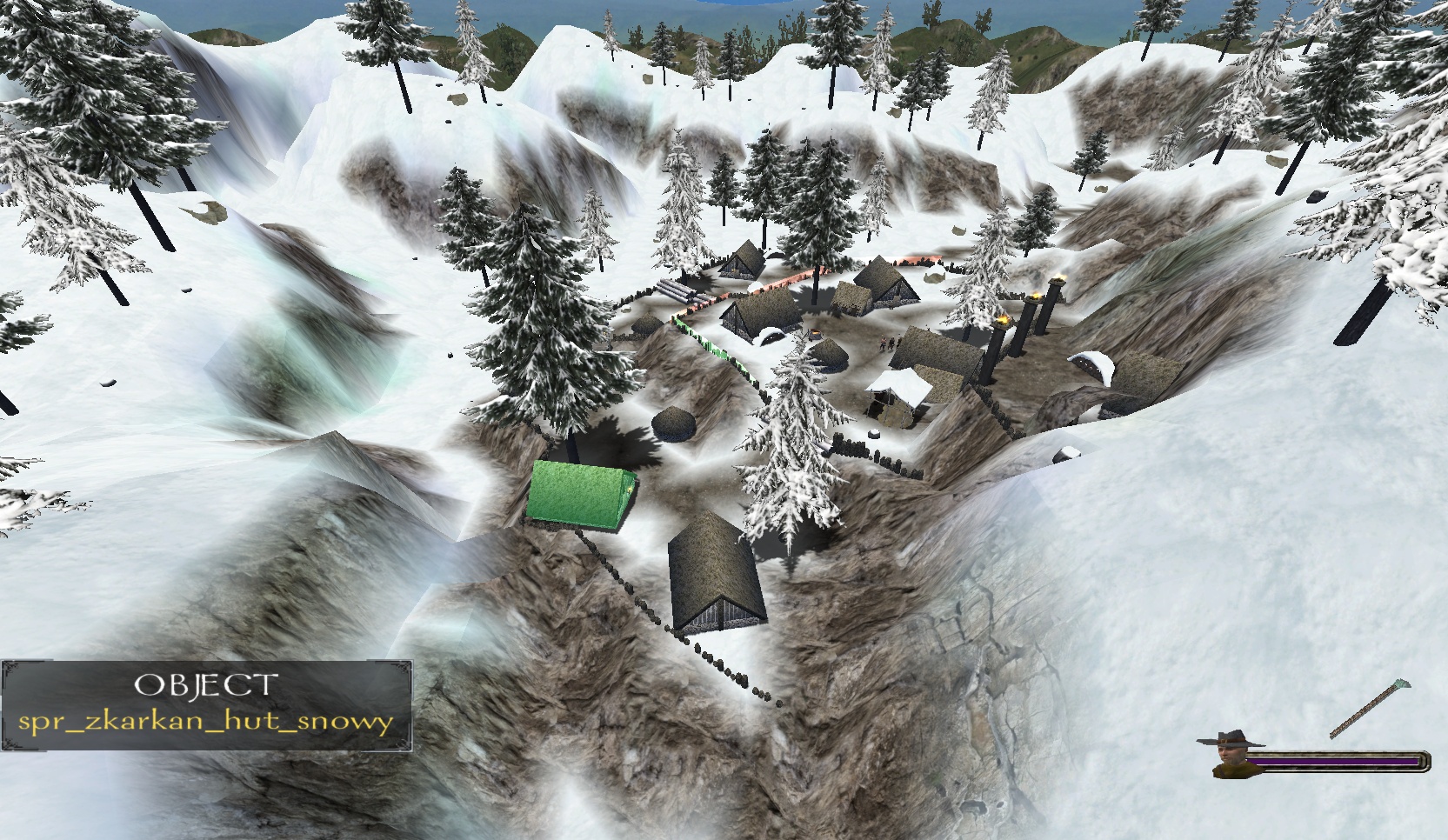 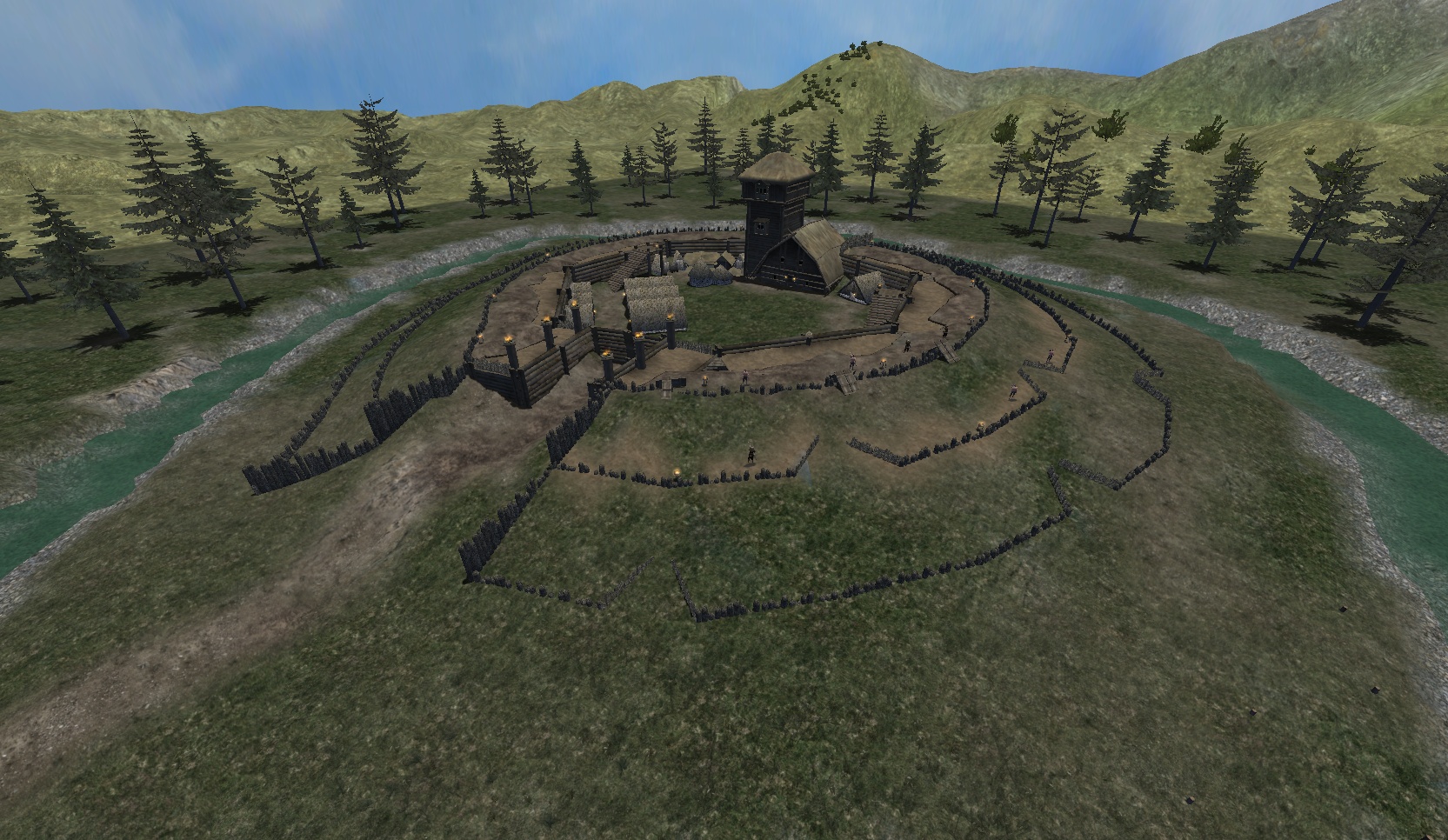 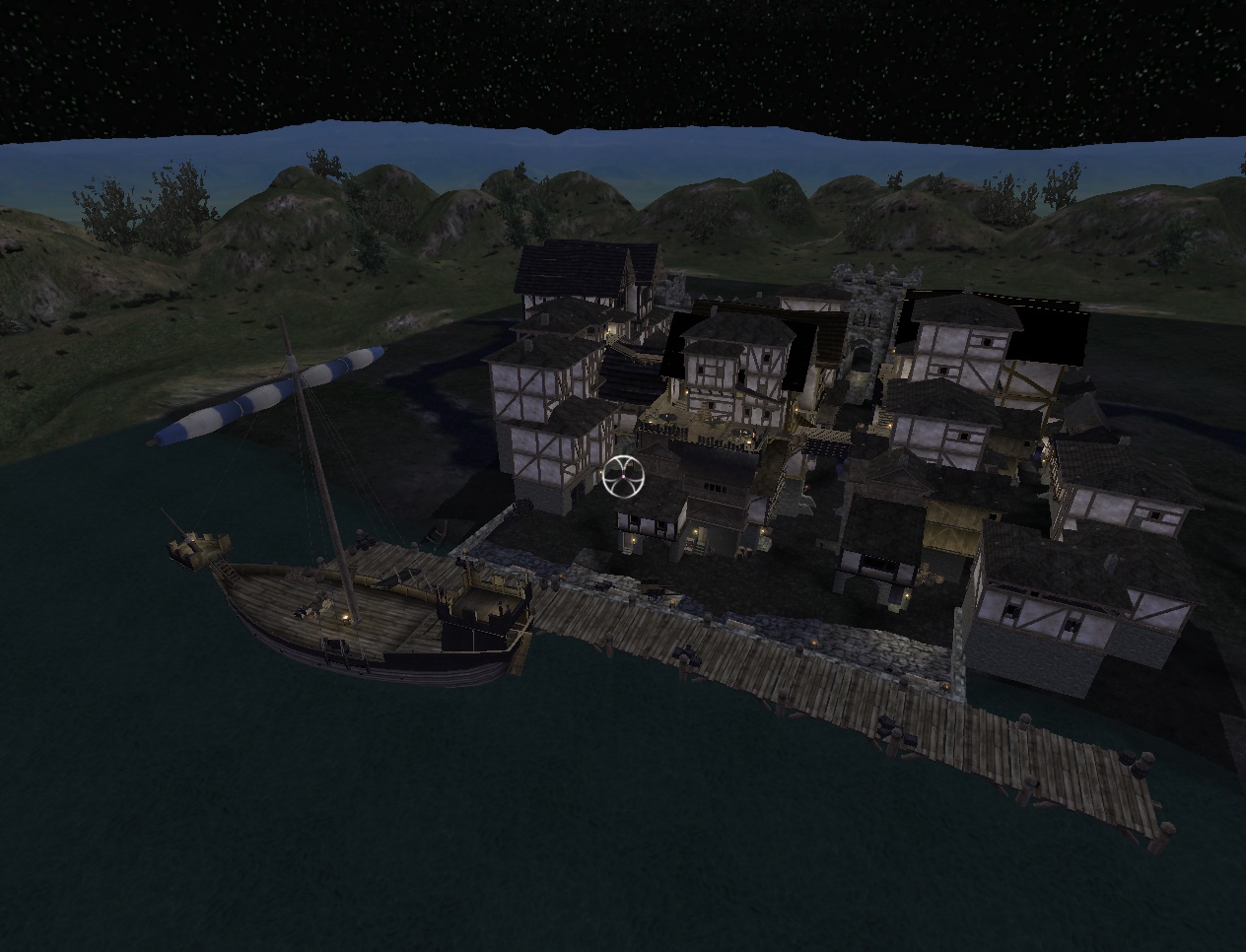 A city that has Grown extremely quickly, and with its proximity to Lundmen and the Alren tribe, has been forced to grow up instead of out. 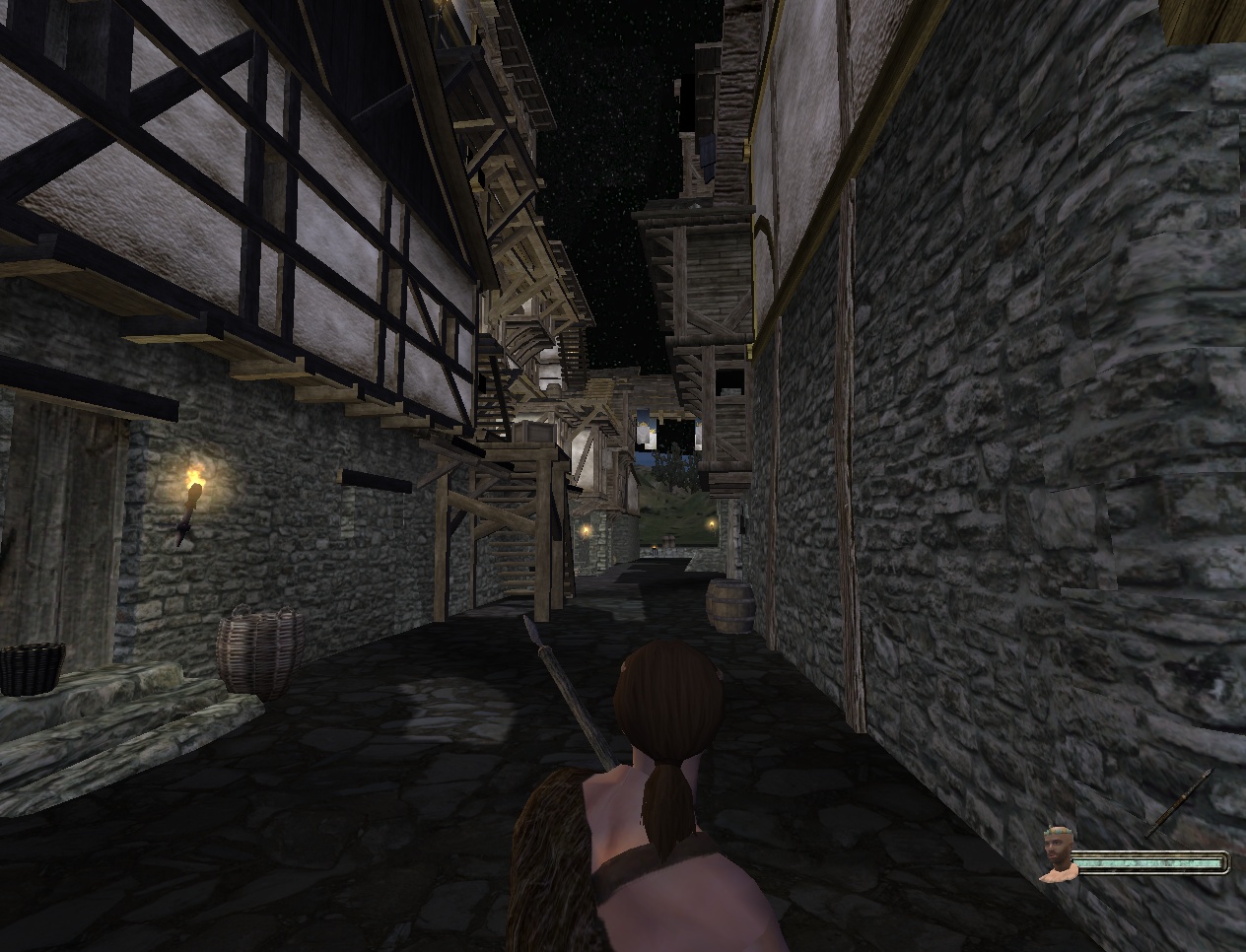 Welcome to merchants paradise! sit down and have a drink and relax at our world famous riverside tavern! 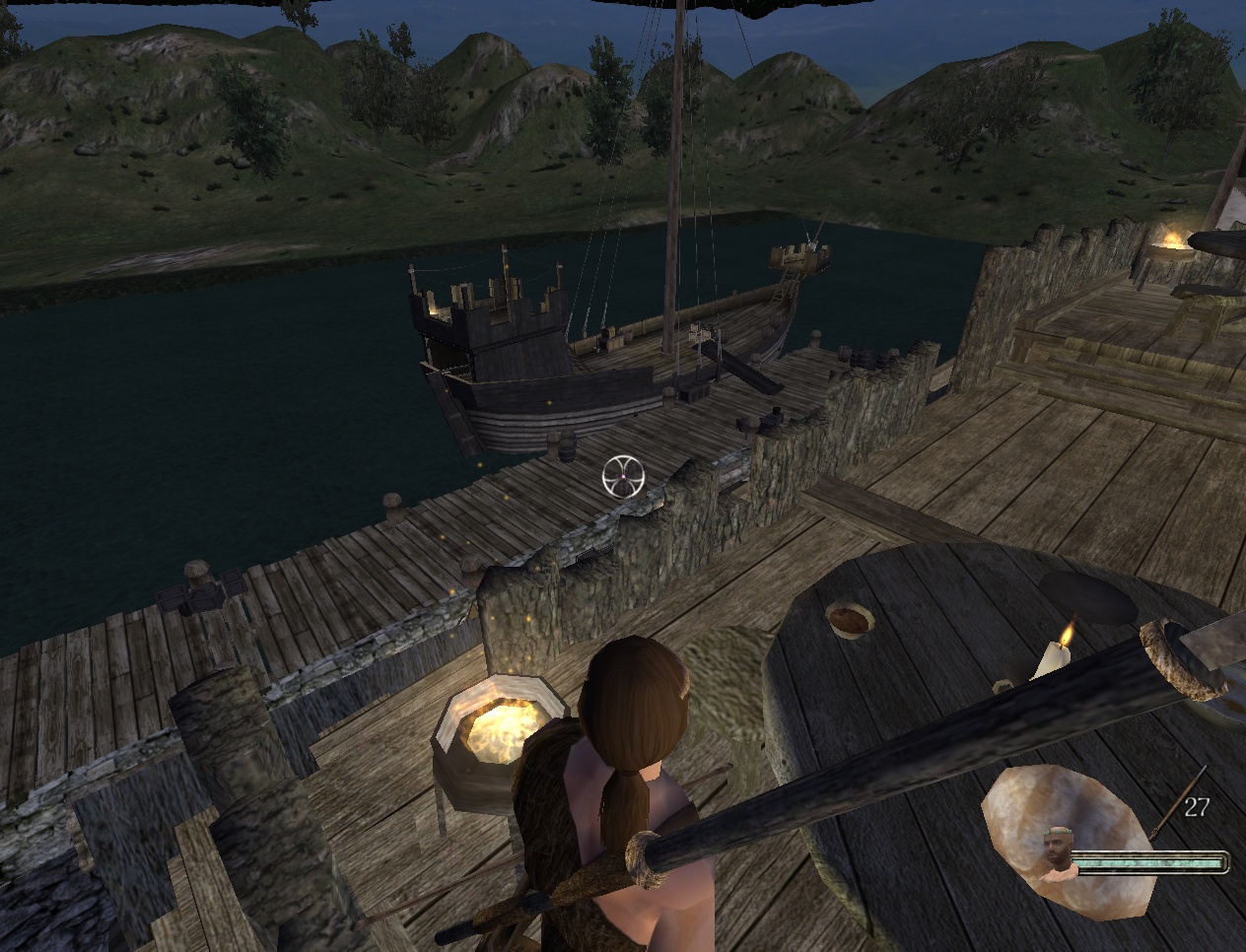 Nobody knows why the Snakes built their great causeways. Some say that it was a tribute to one of their gods, the god of rain, storm and water. Others think they they serve as roads. All that is known for certain, is that the fortresses they built along them are neigh impregnable. 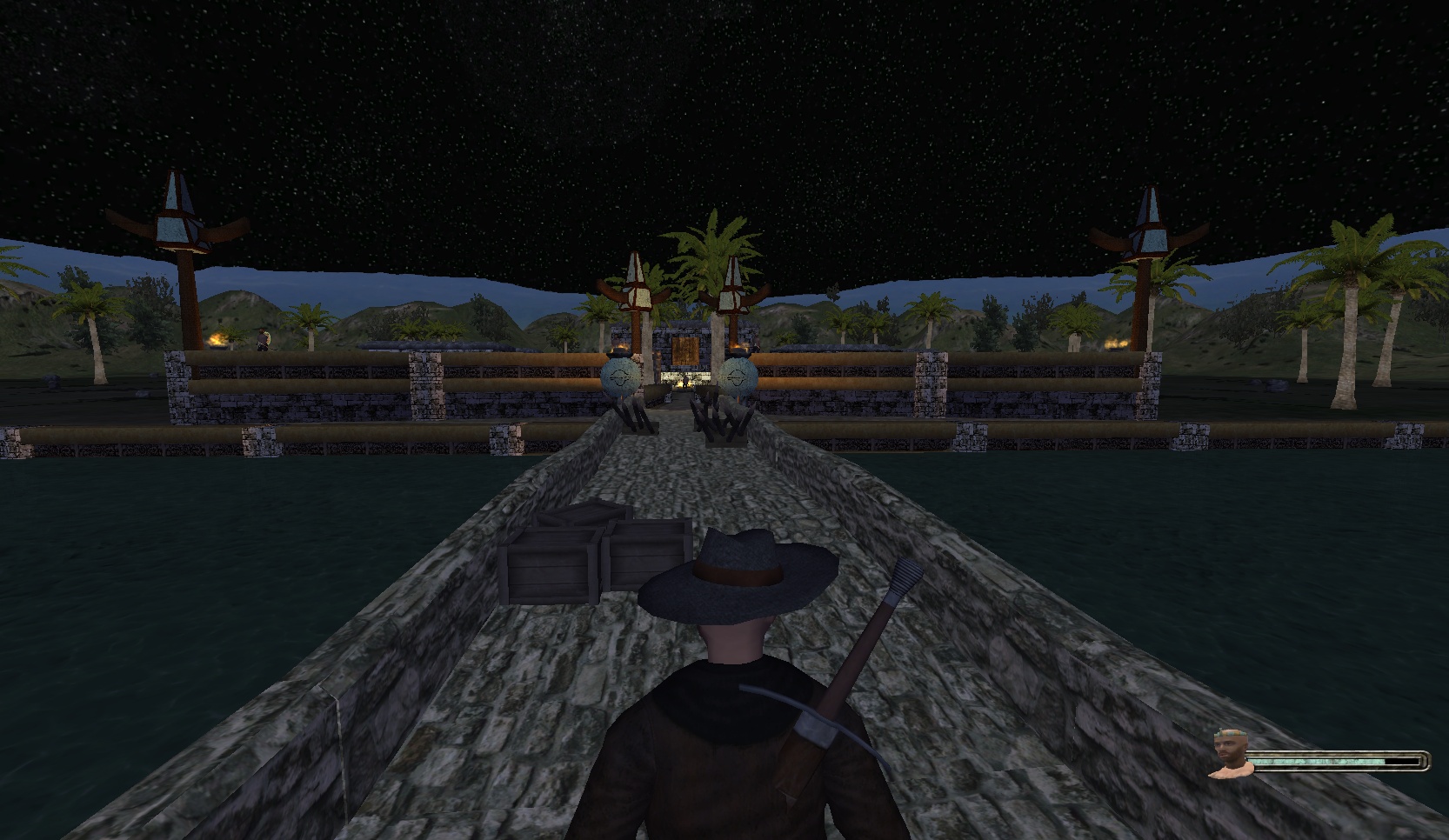 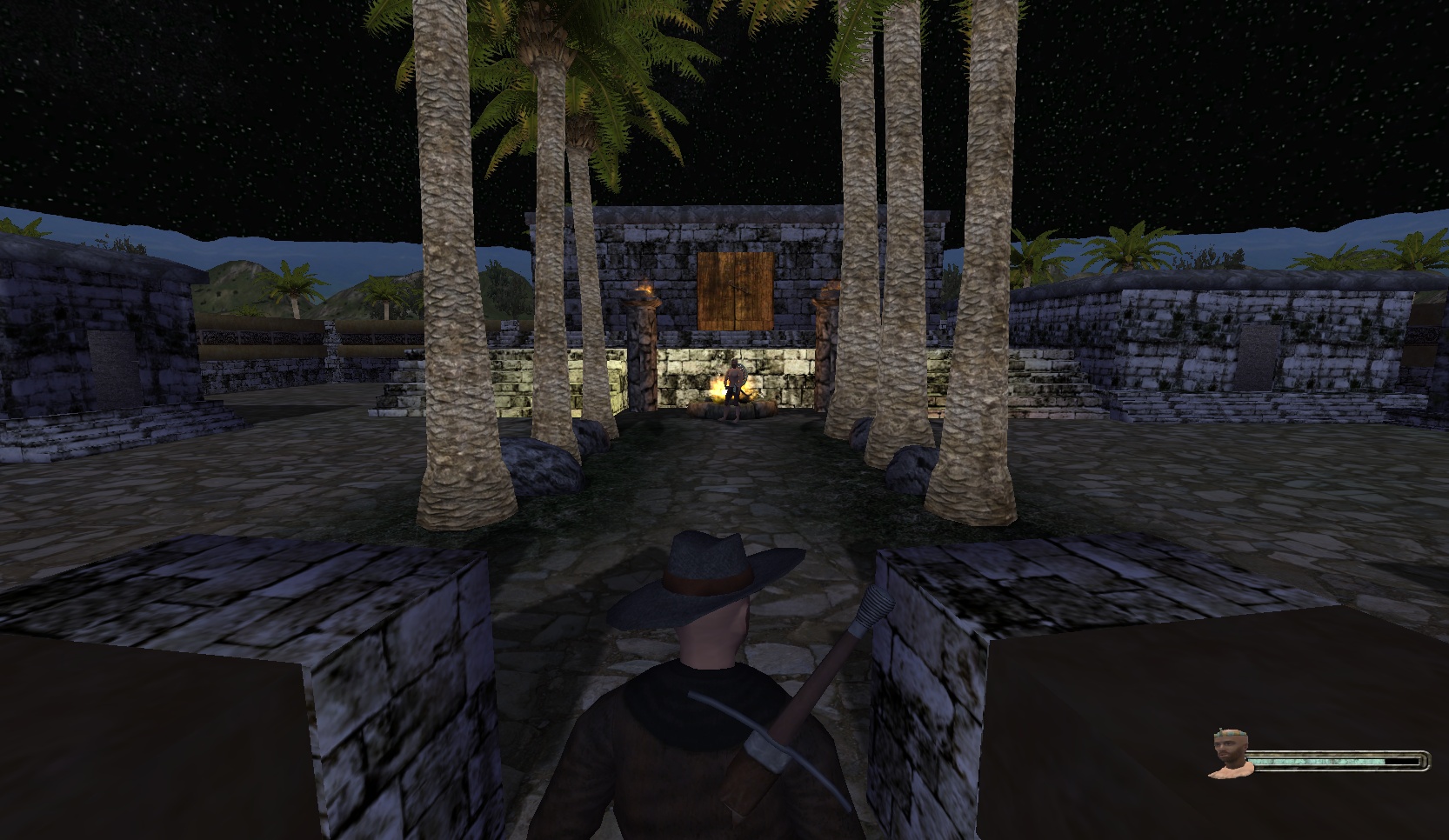 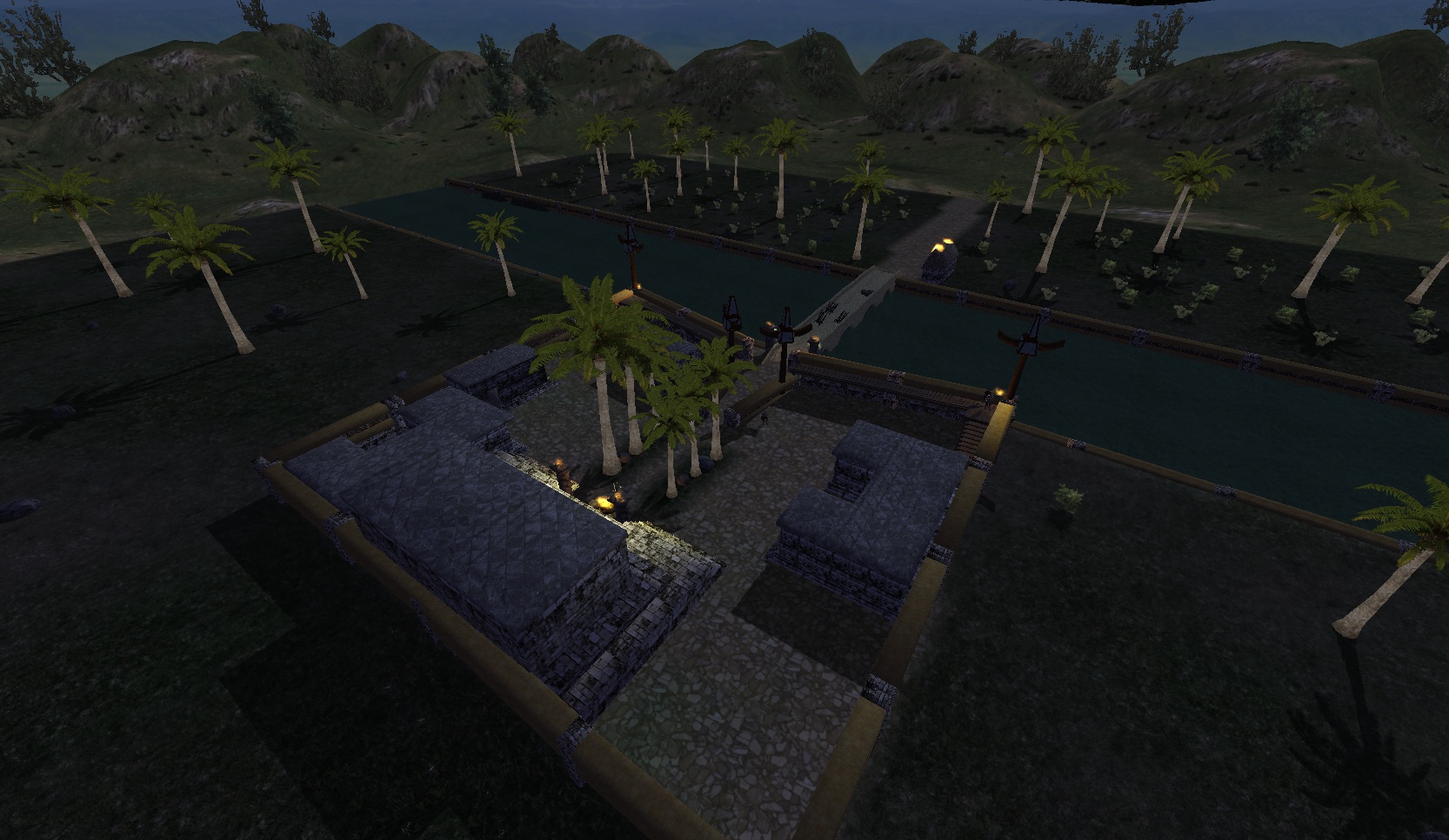 And finally is anyone has any suggestion about what I should be working on, feel free to tell me.

A Novel I am writing, set in the mod setting of New Elgante, from the viewpoint of a young Colonial named Emrik

Smoke in the Hills - A Short Story

This is another short story based within the mods setting, it may be continued. Although it feels like the actual goal and idea I had has been expressed...

This is a short story I have written based within the world of New Elgante. It should be interesting to those wanting to know more of the background of...

This is a fix for some bugs that were overlooked in the release of v0.8. Just extract to the module folder. Read more for the changelog

This is a singelplayer and multiplayer modification for Mount and Blade:Warband. It covers a central theme of colonists versus tribes, with tribes taking...

Got a favourite faction in New Elgante? Then download the GUI to go with them.

This is the full version of the mod, last updated on the 30th of January. Check the description to see the change-log. Just extract the folder to your...

This needs to be fixed up. I love this mod, even with her flaws. But, I want to pick it back up and begin working on it again. Anybody who can provide some kind of skill is welcomed to help me.

Hey serdarkday560 are you thinking about picking this back up that would be cool to know someone is advancing this mod like giving formations and diplomacy freelancer ect.

This is one mod that should have never died, its a very good mod it just needs updated with the times. So many new features are out for war band mods these day plus the hilltop scene was never finished. To bad this will never be worked on again. For its time the mod was gold.

i attacked the tribe of snakes one of there places and when they sallyed to me we spawned all mixed together and i got kileld instantly plus when i did live it was a very small map even if you do take it passed the sally there is no walls. Can this be updated please.

Hey, so has anyone seen the Lords of the factions actually moving on the map? I have yet to see any of them move from their castles..

yeah i have, the karkan lord moves fething everywhere as does the Lundmen and the Arlen barony.

I found a way o kill the lords but would ask: is there a way to kill them honourably i.e. a duel?? some of the lords really get on nerves and it would be nice to try and kill them in a way that doesnt harm all of your relations immediately... thx!

This mod looks amazing and I think that this 10 will compensate for the 1 that the dude put in!