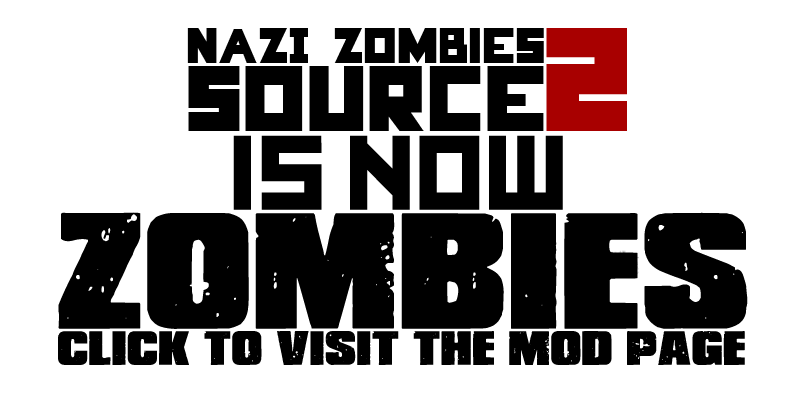 Element 115. Ununpentium. The Element known for being able to re-animate dead cells within animals along with mutations. The Element has proved useful in Weaponry as demonstrated by the Nazi's in World War II. However the side effects of exposure have Unforeseen Consequences. However now they return... In 2013... Throughout the past years many staff members of the original Nazi Zombies Source team have left/moved on to new stuff/got fired for no reason. But now we return.

New Texture Artist and Sound Designer Required! PM Xieneus or anyone on the NanoSwarm team for an application.

Will this be like the original plans of NZS 1?

Yes but with many new weapons/maps/perks and a new gamemode that is simmilar to "Infection".

Probably never, development has been ceased.

Well what is finished?

Well ever since our latest staff members have entered a broad range has been added. We got new Zombie Animations, Weapons, Perks, Power Ups, Points System and more up and running. So lets just say the project is working. But no where near complete...

A Wild Zombie has appeared!

Hi there,
It's been a while since we last spoke. Sorry about that.
Here is the mod page Moddb.com

Our team of 3 is excited to be working on this old project. Lots has changed, but we hope you'll like what you see.

Nazi Zombies Source 2 is and always will be dead. You can unwatch this page, but please go ahead on watch the new page! The mod is alive and you'll get to play it soon.

I'd like to add, Moddb.com is the last page you'll have to go to to hear about this mod. I understand it's been all over the place with different names, and I apologize.

From Nado, Gregster101, and our leader in white robes, Maccadoolie.
Special mention to the hard-working Zombie-Killah!

Nazi Zombies Source 2 is shutting down for good.

Our team is slowly falling apart and our coder has mysteriously disappeared again. We have all decided it is time to call it quits.

Nazi Zombies Source 2 has been on a roller coaster ride ever since the start. We've been alive and kicking, dead and drooling and best of all still here...

May you find water and shade

A car needs an engine, and so too does a mod need a coder.

The Future of NZS2 is brighter than we thought...

Excellent things are approaching, we're no longer dormant and are working as a cooperative unit again!

Here's some gameplay of this mod! Feel free to use the footage for whatever!

Hi! I'm a mapper, a codder and I'm willing to help with the mod, I know the mod is dead but I'll do my best to continue with it, if you agree, you can send me a private message!

Guys i found the download link, here it is. Moddb.com

Good idea do it Xieneus.

why not release the maps to show how you did

damn this looked really cool to

COME ON LIVE *defibs* LIVE GOD DAMN IT! *flatline* THIS IS ANOTHER ONE THIS WEEK