A free unofficial expansion pack for Command & Conquer: Red Alert 2 Yuri's Revenge, which retells, expands and continues the story of the original game. Enhanced with Ares DLL, Mental Omega strives to bring many new features to the game, including a 100-mission campaign, cooperative and a brand new faction: the Foehn Revolt. 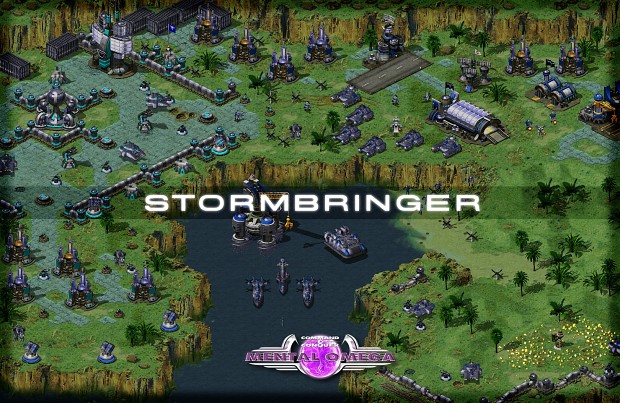 How many nukes you say?

As for Mental Omega? I'll take a whack at 5 nukes.

In the RA2 mission "Weathered Alliance" (where "Stormbringer" seems to be based on) it only took one nuke to destroy the Weather Control Device.... which is scary since it looks like we'll be the ones defending the WCD this time.

I can imagine the mission already, once you repel the first wave of Soviets (which consists of Kirovs no doubt), saboteurs will spawn near power plants and the WCD itself. And then when you were able to survive that the Nuclear silo will be built with a five minute reload time.

You underestimate the MO! You forgot the Apocalypse wave, SCUD (or Dreds) wave, and Wolfhound wave (all at the same time, and you must keep all your units alive or you've lost). And yeah, it's for "easy" difficulty.

Oops, it looks like Epsilon brokered a temporary alliance with the Soviets and now you have to deal with a Psychic Dominator as well!

Fun for Soviets at least.

Except we are defenders, but without the weather crystals.

In "Power Shift" there seems to be new tech structures, what does:

1) The structures near the tech artillery bunker and the missile silo in the lower left and upper right of the map do?
2) The structures next to the gem-fields in the main island (not the oil derricks) do?
3) The tiny things surrounding the concrete fortress, repairable walls maybe?

Is the mission located in the US Virgin Islands? Are there few American forces in this mission with the Euro Alliance and the Pacific Front?

That reminds me of Red Alert 2 Soviet mission 10, Weathered Alliance.

The gods are kind and have allowed the Allies to tame the powers of nature. A mission that has been in the making for a long time, long before even some of Act One missions were finished, will finally take place during the Act Two.

The Allies need their Weather Controller and despite the destruction of the Weather Crystals, the Pacific Front was finally able to complete the weapon. Its presence did not go unnoticed however, and now the enemy is coming to take it down before it becomes operational.

Now the question is, how many tactical nukes does it take to destroy a Weather Controller?