World's most famous liner collides with an iceberg.
Thomas Angelo is sent to deliver an expensive vehicle to Mr. Salieri's cousin along with the gang. When rival mafia boss Morello finds out about the deal he makes sure this trip isn't going to be pleasant. He will do everything to get that car.
Experience a whole new Mafia storyline with a newscript, environment, soundtrack, voice acting & missions delivering a whole new adventure with both the game's original -as well as- new characters.

What does this mod feature?

This mod includes a detailed and highly accurate replica of the RMS Titanic. A freeroam mode will be included for people who simply wish to explore the ship and everything on it. A whole new storyline will be featured as well which includes a number of missions around the ship, fully voice acted with a new soundtrack and cutscenes in between.
The sinking will also be included in this mod and you get to run around the ship as people are panicking and corridors flood. You get to see the ship slowly transforming from a luxury liner into a disaster scene.

When will it be done?

It will be done when it's done.

What are the specs?

Can you run the game fine and ain't your computer cream coloured? Then you can run this mod. I aim to make this mod compatible with both vanilla, as well as Steam, as well as GOG versions of Mafia: City of Lost Heaven. So far, the only requirement is that you have at least 4GB of RAM on your PC and that you are using a 64Bit Windows version.

What is actually completed? 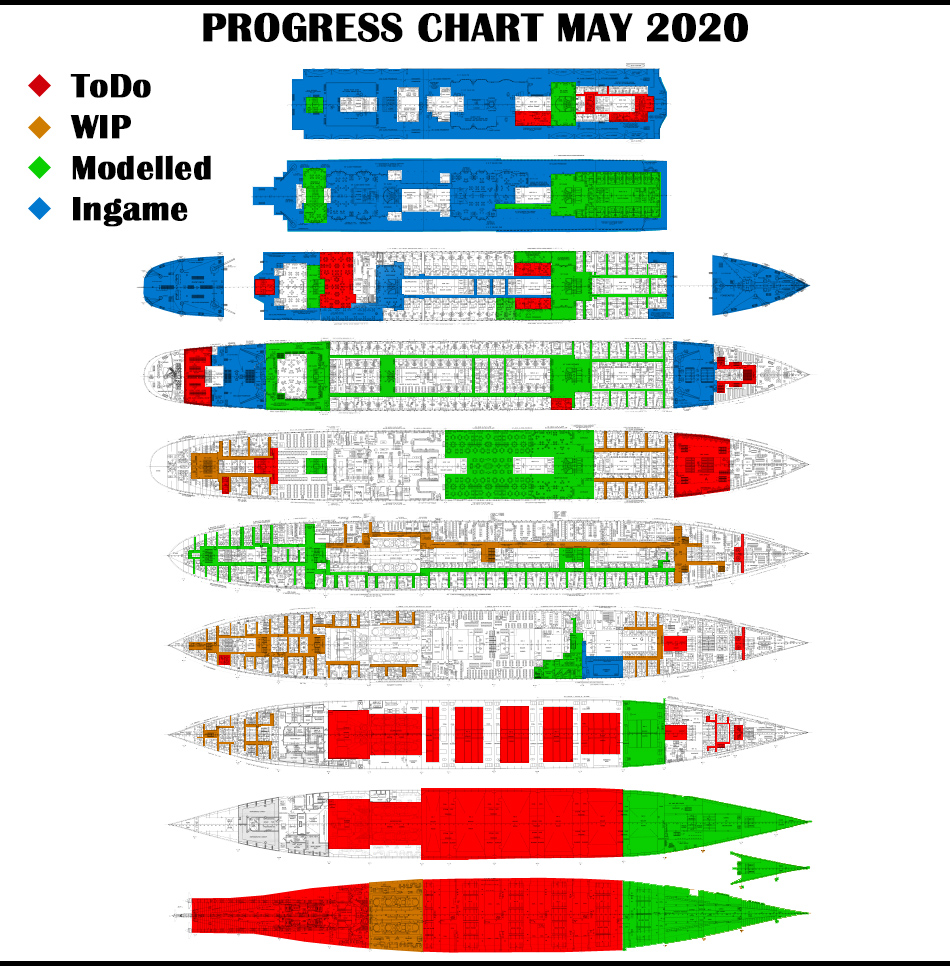 With the release of Mafia: Definitve Edition, I’ve noticed something that made me think. Apparently, our famed four funneled steamer resembling the RMS Aquitania from Mafia 2 made its way into this game and can be spotted from the lighthouse. 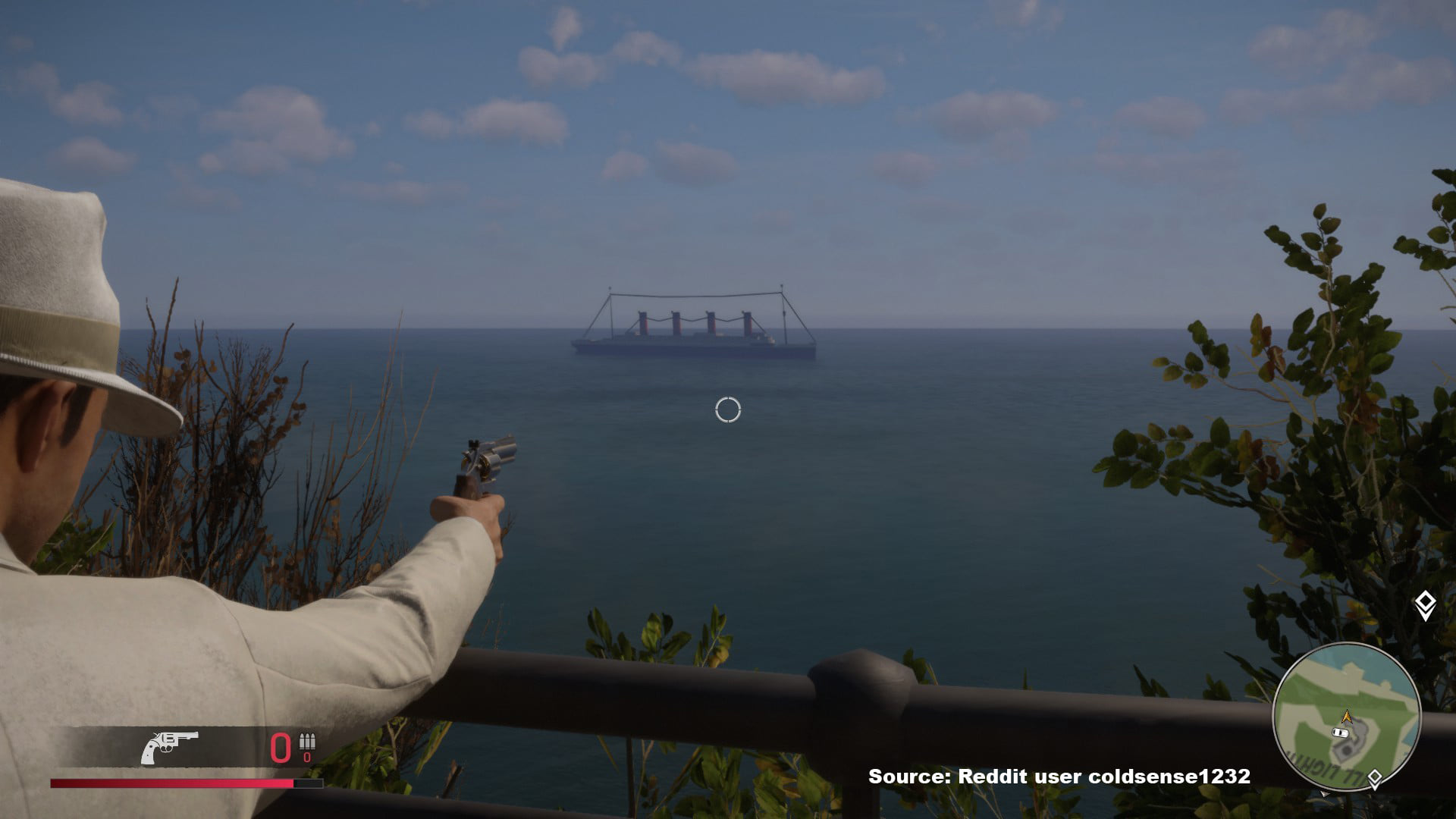 Fine and all, but what about it?

The thing I noticed in every Youtube video or Reddit post crediting its sighting as Titanic, was the noticeable lack of awareness about this mod from most people responding to it. Aside from a few individuals, the vast majority of people were simply discussing the historical accuracy of Titanic in Mafia rather than it possibly being a nod towards the Titanic Mod.

Meanwhile, djbozkosz, an important programmer for the mod and employee at Hangar 13, has confirmed that the ingame ship has nothing to do with the mod. Meaning that even within the doors of the company who made the remake of the very game this mod is being made for, all but one know nothing about its existence.

And that made me think. So far, I’ve always stuck to only releasing this mod once everything is done, because I want to release it with a bang. But what use is a bang if there’s barely anyone to hear it? As of now, practically no one outside of this community discusses the project. Say, if I were to remove all these pages in an instant, the whole project would vanish without a trace aside from the odd comment every once a year somewhere on a niche forum. 14 years of work would be gone just like that.

Now I’m not going to do that obviously. But it is something rather confronting I think. And as I get older, the risk increases that I could never finish the mod to the state I had always considered worthy of release. If that were to happen, it would gain the same effect as just removing it.

So, here’s the thing I’m considering; I want to know what you all think about an early release of what is ingame so far, and gradually updating it over ime. Kinda like a demo, but considered an official release with intent of adding more whenever that is available. This will allow people to finally see the mod themselves, even when it isn’t finished. It can possibly spark some discussion and enthusiasm for people outside of this community as well. For me, the weight on this project would be less since parts of it are already playable. And, I will finally have a good indication of how much actual interest there is. Meaning, as much as I like to work on this project, if the whole thing dies out at a certain point despite its release, I’d know if the things I’m doing are still worth doing.

Anyways, please let me know what you all think about this idea.

The Mafia Titanic Mod now has its official Discord Channel!

Contrary to my previous future plans announcements, I will actually be announcing less features of the mod. But don't be alarmed.

A new exporter to Mafia's format made the ingame implementation a lot faster. After a huge cleanup of the mess called Mafia's modded game directory, I...

Hardly exciting news for any moddable game nowadays, but for in Mafia this is quite the milestone.

This addon will replace the Thompson 1928 for the Maxim Lightweight Machine Gun (LMG). The weapon features a new textured model, with custom sounds and...

Just out of curiosity, is Stateroom B58 going to be in the mod?

At this moment it is not on the planning unfortunately, since the staterooms require a lot of work.

I Know how it is x3, Spend like 2 months doing a B58 for my Roblox game, I can imagine on a more professional 3d program :P

I noticed the ship the other day in the remake and didn't think once about it being related to this mod, but it would have been nice. The mod has been losing more interest over time, that I can agree on, I've been watching it for a very long time now. I have projects I put years into and never released them because I didn't want anyone else to dissect and copy my work especially if it isn't finished. "I'm selfish I guess lol"

Releasing it early wouldn't be a bad idea, I just wish you could make it a standalone mod on Steams marketplace to give it more traction. Maybe do some sort of Google Advertising and create a dedicated website for this mod, sometimes I feel like ModDB is dying.

Try not to be defeated, I support this mod far more than H&Gs Version and I can't wait for it's release weather it's finished or not.

Thanks a lot, I appreciate it. I must admit that the prospect of having my work stolen is something that does worry me occasionally. Especially when I take into consideration of how underdog this thing is. All it takes is for one person with 3DS Max and bad manners to rip the whole thing out and re-release it as a Titanic mod for a far more contemporary game, or release it standalone with some Unity assets, and all of my effort is wasted. Sure, this mod would still exist, but I would become the impostor of my own work towards an otherwise more well known mod or game.
Because it has in fact happened in the past that I have been banned somewhere when I issued a copyright claim on work that got stolen off of me. The thief used it in a project that got far more clout, so automatically, he became the original creator in other people's eyes.

Granted, there's a boatload of watermarks spread throughout each and every file in ways most people wouldn't think to look for. But it's only as effective as people's knowledge of this mod.

I've ran a poll in the past to consider releasing this as a standalone game, but decided to refrain from it. Mostly because it's a lot of work in its own way. Anyone can slap a few Unity assets together and toss it onto Steam. Making something of quality however, is a different story entirely.

This is looking really good. Keep up the good work!

1) Whaat? I always though that Titanic Glory and Honor is this same model, and the same project. Is it rly total different project ?? I though you were making this with Hudizzle, and isnt hudizzle author of Titanic glory and honor ? Now Im surprised. Im following this mod since 2009.

2) By the way, you could release this mód long time ago (As alpha version), and you could just updating it continuously.

3) And you’ve said something About Daniel Vavra, that you didnt understand a word. You could send me that video. Im Slovak, and His language is almost the same. I can translate it.

I appreciate the compliment!
Hudizzle/Kyle Hudak did indeed use to work on this mod as well. He made various interiors for this mod before heading over to Honor and Glory.

Through the years, a demo was unfortunately never possible, because until this point, there have never been as much assets put ingame yet to at least deliver it in a playable state. And even now, if I were to release this, people would get bored in 10 minutes because it's currently as much fun as just viewing a 3D model of the Titanic. There is no guaranteed play time for the amount of hours put in to make a scene.

I was able to find the interview. The mention of the mod is somewhere around here: Youtu.be
Thanks :)

hah, yes sorry for late reply. He was just surprised that people are doing those big mods for Mafia :-)

And thank you for your reply

with the Mafia I game remake on the way
Youtube.com
may i ask if they dev team are following your work, and if they would
care to include you and the project in any way shape or form

sorry if i am out of line

To my knowledge, they're generally unaware of this mod. Although, djbozkosz, who did a lot of technical stuff for this mod is currently employed at Hangar13. So at least one person is aware of it over there.

I once wrote a letter to 2KCzech a few years after Mafia 2 was released, asking if I could get the SDK for Mafia one, since it was already far obsolete by then. Unfortunately they didn't comment on the mod in their response, and an SDK could not be granted.

Dan Vávra, who is the original creator, knows about it though. But I don't know what he thinks about it. He did mention it once in an interview briefly which I think is really cool, even when I couldn't understand one word of it.