The Titanic has come back to life in all its glory in the biggest Mafia mod ever made! Step aboard and explore the meticulously recreated and highly populated ship with accurate interiors and lavishly detailed environments. In Part One of the Mafia Titanic Mod, you'll follow Salieri's gang as they embark on a cross Atlantic journey. All the way from dry land up to your very own cabin.

Part One does NOT yet include the sinking. This is planned for a later release.

Please read this to manage expectations

Part One of the Mafia Titanic Mod

From the funnel catwalks down to the pool. Part One includes many areas to explore aboard the ship including both Grand Staircases from top to bottom as well as less often seen areas such as the Bath Facility and Reading & Writing room. All displayed in full detail. Have a glance at what it would've been like to walk around this magnificent ship.

A Life at Sea

Just some static scenery wouldn't be half the fun without something to do. Aboard you'll find various things and people to interact with, to make the whole thing come more to life. Have a swim, ride the elevator, dine in the grand saloon, use the electric bath or simply enjoy the view on deck. Just some of the many things you can do on board.

Rarely seen in Titanic games nor in any other Titanic mod to date is the high attention to detail and accuracy to honor the craftsmanship involved with the real ship. Each and every area has been made with care to really give the player the idea of being aboard a floating palace, both in visuals as in sounds.

Of course, being Mafia and all, it wouldn't be complete without some mafioso wrongdoing. Equipped with many period correct custom weaponry within a sandbox scenery, it is up to you to deliver some fellers an offer they cannot refuse. Just beware though, not everyone appreciates their dinner being ruined.

Disclaimer since it's 2021 and someone is bound to be offended
This mod does not imply or intend any disrespect toward the victims of the Titanic disaster. The ingame setting is entirely fictional including the characters represented within. With or without any similarities to real life persons, intentionally or not. Nor does this mod intend to accurately represent the disaster or the people involved. For those offended easily, it is highly suggested to go for a walk or have a cup of tea instead.

If you'd like to give a small token of appreciation for the work that has already been done on the mod, feel free to drop a coin HERE. Although donations do not provide any special perks, I'm forever grateful for such kindness!

The waters have settled as everyone got their ticket onboard Titanic.

Following the release of the mod, it has been quiet regarding any updates. This was due to a combination of a much needed break as well as dealing with the "aftermath" of the mod's release, including troubleshooting as well as responding to the very kind messages I've received from many of you all. Again, I truly appreciate the response I've received for this mod, and it means a lot seeing everyone enjoy it!

For the time being, progress will remain a little quiet. There's still some stuff for me to take care off privately that I had postponed because of the release, and I want to venture a little into contemporary game engines to see what I can do there. However, that doesn't mean that I won't pick up this mod again. Plenty of content already exists and quite frankly, with part One finished, I have a very solid base to continue from.As some may have already read, I am planning on making 3 more parts:

Part Two will include the rest of all the PLANNED interior. I had to emphasize that since the story already went round the internet stating that I'm including the whole ship. To see what remains, please see the progress map HERE.

In conjunction with that, I intend to include the rest of the storyline up to the point of the sinking. More details on Part Two will come out when I begin working on it.

Part Three is all about the sinking. There's a brief mission sequence that initiates the whole thing. How exactly this is going to turn out is hard to say in detail at this point, but I have some ideas in mind that seemed to have worked well in early tests. In any case, the sinking is not going to be a simple case of "clip a plane of water through the boat and that's it".

Part Four is the aftermath. There's still a surprise in there that one of the mod's modellers has worked on. This part no longer involves the Titanic for obvious reasons, but will give closure to the whole thing.Lastly, I still have planned for a lowres texture update for the mod. I hope to release this soon, as well as any patches this mod may require.

People new to the project may expect part Two to release in 2036, and the rest in 2051 and 2066. Bear in mind though that most progress was made the last two years and that a lot of those 15 years on Part One were void because of improvements or progress that has never been directly used in the end product. As mentioned, plenty of stuff already exists for Part Two, and I now have an established workflow in getting this ingame. Despite all that though, no dates as of yet. I'm gonna take a break on progress for a moment, but will keep my eyes on this mod every day.

In the mean time, as a small teaser, I'll leave this render of one of the most complex things I've had to model for this mod. You shall find this fully animated onboard in Part Two: 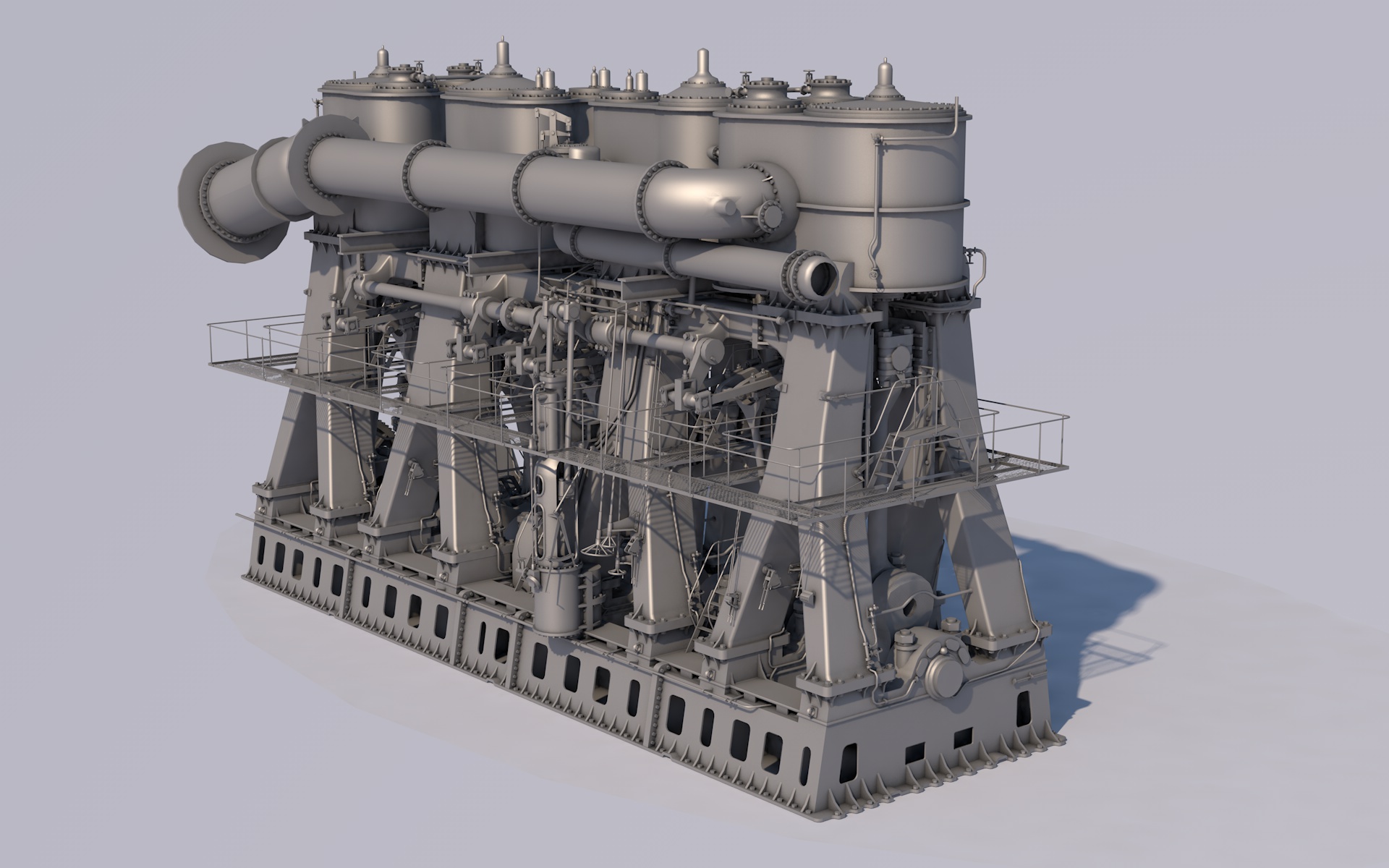 The Titanic mod is now available for download! Who knew I'd ever type these words. Get your copy now!

Contrary to the estimations given before. With the Beta testing nearly done, I have picked a date on which the mod shall release!

The Bugs have been Squashed

Another milestone in the mod's development. The pesky bugs have been squashed!

The sudden influx of media attention since the Eurogamer interview has opened up a lot of potential of misinterpretation. Especially for newcomers who...

Part One of the Mafia Titanic Mod - Version 1.0.0 Part One includes the first sequence of the storyline and a freeroam option of the ship at sea, and...

This hotfix is for Steam & GOG users who are stuck in an endless loop of the game's Setup launcher.

On some PC's Windows defender may prohibit the installation of essential DLL and EXE files. Causing none of the custom models to appear.

The second iteration of the famous Renault Towncar, otherwise known as the Coupe DeVille or CB. This time finely modeled by Mafia's experienced car modder...

This addon will replace the Thompson 1928 for the Maxim Lightweight Machine Gun (LMG). The weapon features a new textured model, with custom sounds and...

Thank you for all the effort in creating this mod, truly amazing!

This mod just appeared in a PCGamer article, so there might be more traffic than usual. Either way, this is completely amazing, and I can't wait to see what else you have in store.

That's fantastic! It's lovely to read a new article about the mod. And thanks for the kind words!

I have been following this mod for a long time. It has been in development for a very long time, during this time I unfortunately gave up my big mod, but you're still making your Titanic mod. This is amazing! Great work and I want to wish you luck!

I remember stumbling on this mod about 12 years ago. Would pop in and check and marvel at the progress being made. It's amazing to think I'm playing something that I've been excited for since I was 13. Bravo, you poured your blood sweat and tears into this, and it shows. Not only is it not just a prop, but changes to the game as a whole outside of what was intended for this engine. You've pushed the limits to deliver something that is nothing short of amazing. Can't wait to see more, and already know that it's worth the wait. Hats off to you.

Thanks a lot! Great to hear that you're enjoying this mod after all these years! I really appreciate it to read these experiences.

Hi,
I've never played mafia, or really cared for the titanic, but I just saw your interview with minime.
Your passion for this thing is insane, and it drew me in. I might never play it, but I'll be damn sure to follow all the updates from now on, and cheer you and the team on!
Awesome work!

I'm really glad to hear that this project triggered your interest! Thanks a lot for following it and for the kind words!
It may be a little quiet for now with updates, but at some point I'll happily continue on it again.