I came to this place last winter in a measly condition and was caringly treated by my Brothers and Sisters. The Lord has bestoved upon me the burden of amnesia, for some reason of which I am unaware, but I dare not question His wisdom. I shall honor His will untill my days are done, so that I may then be allowed passage into His kingdom. 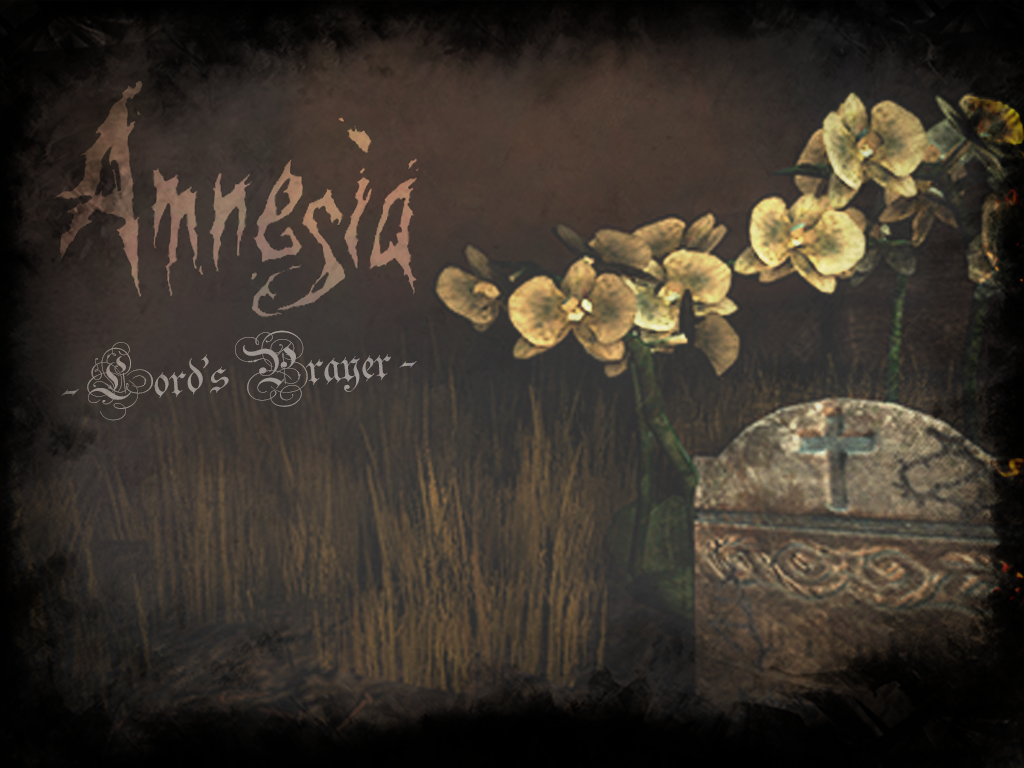 First of all, 'Lords Prayer' is a project that has been on my mind for one and a half year and it has been hard to find the time, but also motivation to carry it out. Some of the factors have been bad habbits and procrastination, but also some that is earsier to justify. I finished my last year in high school this summer and since then I've moved away from my parents to be closer to my education at Aalborg University in Copenhagen. All this has been very time consuming, but I finally feel like I'm well settled in my new apartment, though I still have to spend a lot of time at my study.
The project was sparked in the summer 2012, where I came up with the initial concept and made the title theme for the mod. Since then, all I ever did was making a bit of level design once in a while when I felt like it, but very recently, I've ignited the creative process by starting to sketch the levels and note down all of my crazy ideas and put them on the wall. Now I'm done with the level design concepts and the next step is to figure out where to put important segments of the game e. g. keys tools, notes, etc. and figure out how the player is going to progress through the game.

There is still a lot of work to be done, how ever I'm really looking forward to all of it even though it undoubtably will be tough. I tried to get a friend help me with this project once, but that didn't work out, so I've been all on my own, which often has been very demotivating. Now how ever, I really feel like I got this show on the road and I hope it can be finished by fall this year if I stay focussed. Keep in mind this is a rough estimation and is only feasible if everything comes Millhouse. This project is not just a hobby, but also an exercise for myself in project management, coding and over all game development, which I hope to use in my future portefolio.

Certain things are needed in order to complete this to an adequate standard, so therefore I have a couple of requests. First of all I need testers during the beta, so please let me know if you're up for the job by sending me a private message. Another crucial part the project is missing is voice acting, which will also be needed during the implementation and testing. Other parts that would just be nice to have are a talented musician/foley artist, a modeller and a concept/2d artist. Having those parts will really give the project a unique touch, but if you're neither of those, then please let me know of any cool sources you might know, where I can find some custom content.
A writer would be nice for some extra input on the story and manuscript as well as a level designer would be nice for making the levels extra interesting.

No formal requirements besides that you are willing to provide me with constructuve feedback on my work. You will be given a more thorough consent after contacting me.

I need a very pompous male voice for the main antagonist.
A very light (but adult) female voice for an important role.
Voices for a couple of lesser roles.

If you would like any of these roles, then please contact me by private message or by email (ingemannofdoom@gmail.com).

can i file out to be a voice actor/testor

Send some samples and we will see. =)

Sounds interesting !
Why do you want to make this a full conversion, though ?

Custom menu mainly. But also have some ideas about other technical stuff like inventory and enemies.

Custom enemies don't require a full conversion, luckily : ).
A custom menu does but well I never felt like it was a core feature. Some people do, though, and that's fine ^^.
Good luck with your mod !

Why would it? :3 Yeah fonts, lantern and custom sounds would be jolly.

Basically I have nothing against a FC if there is a real purpose. If a modder changes the UI just for the sake of doing it and making his mod more fancy, I really disagree.

Some mods really require a FC (modern mod with flashlight, girl as main character, very logical physics modification) and it can be very interesting and original to play.

I will make sure to make it justifiable, don't you worry ;)

This custom story seems very promising and has a great concept built around it; I hope you the best luck in finishing this.

Take as long as you need on the CS, as I would rather see an amazing story and have to wait, than seeing something that was obviously rushed.

I would love the idea of beta testing it.

Looks great and best of luck!

I will take your advice ^^