The English countryside is under attack, rumors circulate of a huge beast, a vicious creature that stalks travelers and hunts then down, farm houses attacked and livestock slaughtered, trade caravans found in ruins, horses and drivers alike torn in half, bit marks as wide as the length of a mans arm.
The only other clue to the cause tracks leading back off into the forest only to disappear without trace.

The last straw a small hamlet town is laid wasted to and shortly after the eldest son of an nobleman and his escort struck down and killed.

Forced into service, the Journeyman, a man without a past or name, a master huntsman and animal tracker, condemned for crimes against the crown, he is charged with eliminating the threat, or his life is forfeit

Kill the beast by any means necessary

Word of the beast has however spread and he will not be alone in his task, chasing the prize are bounty hunters and would be heroes, as the price on the creatures head continues to rise bounty hunters and mercenaries from all over the country and some even further a field begin to arrive.

The concept
Play Style will be FPS/RPG, all combat and movement is FPS with the RPG elements being primarily conversation with NPC's shop keepers and inventory related aspects.

The game will be split between following story based missions and objectives, tracking/hunting/chasing the beast across the English countryside, and side quests which unlock and earn extra equipment and upgrades.

The main story sees the player living out of public houses in the area of the country the mission takes places in, and occasionally receiving orders from, or reporting back to London, for more equipment/info/ect.

The story will also involve other bounty hunters who can be co-operative or hostile, and soldiers to help in your mission.

Squads of AI will play a big part in the game, they will regularly aid you in your missions and fight alongside you fighting/hunting or retreating from either the beast or other people/animals,

Characters will play a big roll in the progression of the story, along side the main protagonist there will be several bounty hunters who are also after the prize, what is for you to decide is how they weight human life and their own greed against human life and morals.

Half European half Japanese huntress

And possibly a sniper.

NPC's will be able to give missions/tasks/information and join the player at points in the game, if some in game system can be worked out the combinations of heads/textures/models should number in the high 80's to perhaps low hundreds.

Locations
Locations will include major cities of the era and villages/town on the roads between
All the main locations will be free-roaming and accessible from only a short period of time into the game.
They will range from built up urban areas to dense forest and rolling countryside.
To date locations are about 10-12 small towns in-between 4 large cities, London, Cambridge, Oxford and Southampton.
There will in addition be one off locations where important mission/events take place.

Weapons
Bladed, flintlock and other weapons of the period.
Keeping with the time period all weapons will be somewhat realistic.
Ranging from simple bladed swords and knives, flintlock pistols, muskets, blunderbusses ect and other weapons such as a Crossbow, to the slightly out there anachronism weapons like the Nick's Volley gun
Almost all weapons will be upgradeable, from better quality flints to decrease the number of misfires, finer powder to give a damage advantage, to fully automated speed loaders for the guns making them almost semi auto.

As this mod is not geared towards constant combat, and is not a gun/enemy fest some less fun aspects of the time period will remain, primarily RELOAD TIMES.

Reload times are realistic. 15-20 seconds for a pistol 20-30 seconds for a larger gun, so if you fire all your guns empty better make sure you kill what your shooting at or else.

However with the addition of upgrades the average reload time should be cut down to about 10 seconds for pistols and about 15 for larger guns.
The player will be encouraged to carry several small arms, shooting and switching between all to enable continuous fire at a target, then having to pick a strategic location to reload before continuing, this coupled with AI coding making them not constantly charge are you means that typically you would fire empty and hide behind a tree/some ruins and reload while they circle round.

In contrast most enemies will go down with one or two hits and you have the scenario where unless you're fighting something big you shouldn't empty all your weapons anyway.

Some system by where entering a "Safe" zone such as a tavern (non-combat zone) automatically reloads all weapons, as well as entering a new level should make it a matter of just not wasting all your shots while in combat.

There are three ways to get somewhere in the game, walk, coach/cart, or horseback.
Walk is understandable enough, just damn slow.

Coaches will run to and from most cities and in-between farm carts and passers by, coaches will also become mission objectives (defend the coach from attackers).

Horse is the main mode of transportation.
Jump on a horse yourself and ride there.

No fast travel, unless part of a mission/cut scene.
"Obnoxious" travel times are a matter of perhaps five-six minutes acceptable in my opinion.

Should you be unlucky you may even run into the beast in your travels.!!

The Beast
The beast is an unstoppable killing machine, don't expect to take it down with a few shots, this thing will make you wish you were dead.
The beast is technically invincible, for story reasons it cannot be killed until specific points, and by very large or powerful weapons/forces.
It does however take damage and have to stop when hurt, there will aso be side quests which will result in the beats taking permanent damage that stays with it till the end og the game, this making the final fight easier.

The player will have several opportunities to kill the beast and these can also be failed, where upon the game will progress until the next available opportunity.

This in effect make it less of a boss battle and more realistic/fluid, there will be a small number 3-4 perhaps of times the beast is vulnerable (these will however be obvious moments).

Conversation system with NPC's allowing weapon buying/quest acquirement, information flow ect.
Combat will be typical FPS, as the RPG element to the game is targeted at being the items/upgrading of weapons/armor and the conversation system as opposed to stat and level building.

Quest system
Driven primarily by the conversation system the player can chose to and is given story based missions which are show along with any relevant information in a log which can be viewed at any point during play.

Free roaming world
All the basic maps will be available after a short period of play (the first few little tutorial quests), almost every level will be accessible from the start, (only there will not be a lot to do in them except small side quests), however some story based side levels will not be open/available until needed. (Offshoots and the odd out of the way location level),

Inventory
A selectable inventory based either on weapon slots or more likely weight/pre defined max numbers of each weapon limits, as well as a Stash/Box to put excess/additional equipment in when not needed.

Weapon/Equipment Upgrades
The correct storage and addition of weapon upgrades where applicable and they must be stored in such a way that you can possess two of the same weapon with a different configuration of upgrades.

Horse/Coach
A transport system by where the player can ride a coach between locations, and hopefully the addition of the ability to mount and ride a horse freely in each level in place of the coaches.

Day/Night Cycle
All but the most specific of levels will be subject to day and night cycles; this also dictates some AI routines.

NOTES/ADDITIONAL
There is going to be a Steam punk influence, so architecture, weapons/amour and the entire world will have a slight twist to it.

Welcome all again to another news update. Smaller than normal but still we have progress. In regards to a website for the mod that is being discussed and sorted, design given to someone to come up with a first version. SVN wise have found a site and will be playing with the ins and outs of their system.

Now onto what we can show. Jojo has given us the final version of "Bear" and he looks as cool as ever.

Jojo has now moved onto doing some environmental concept s which I hope to show soon. In regards to weapons we have both some new concepts and a new model from one of those concepts! Concepts courtesy of Joel 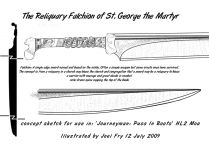 And the finished mesh for said first design (the other two are currently being worked on). 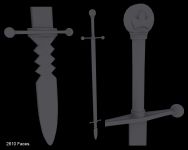 Thats it for this news, I hope to update in about a week with models for the two remaining swords. As always we can always use more help, concepts, modeling, mapping and programming, if you think you can help then PM me.

A general update and news on whats been happening, Mainly concept art and a little testing in the shadows. Slow but steady all in all And Life getting...

New concepts, team members - some lost some gained. Progress and thanks. Work in Progress And Help.

Update for October news on mapping and possible team growth.

This die in the end?

As it stands on hold due to life getting in the way GGrr, and the difficulties of getting enough people together to make a decent start of it. :(.

On hold due to real life taking over (may be loosing my job, death of a member of GF's family and mod work grinding to a halt/lack of people, looking for a way to start fresh with more people and drive).

Sucks I want to be working on this.

Thanks, I have a few interviews coming up as I did loose the job :P, they should be Mon-Fri without weekends so that frees up some time ! :D.

So, when's this thing going to be finished??

No :D something much more hostile.

T.T i like shreks one xP i am waiting for this mod