I Am Legion - The Pursuit

Remember when we were all counting down the days until Dying Light came out, watching all these INTENSE trailers, watching zombies run up walls, jump from buildings after you, feeling creeped out by the dark night concept? Seeing Rais's men with guns guard airdrops, watching as the player just barely gets away by using his hook?

This mod aims to fix just that.

This mod adds a harsher AI to be reckoned with (human and zombies), environmental changes (weather and time scale), Inventory/trader overhaul, Realistic sound script manipulation, Player appearance (all skins unlocked), and a ton of new features across Harran. This is a complete overhaul to Dying Light. 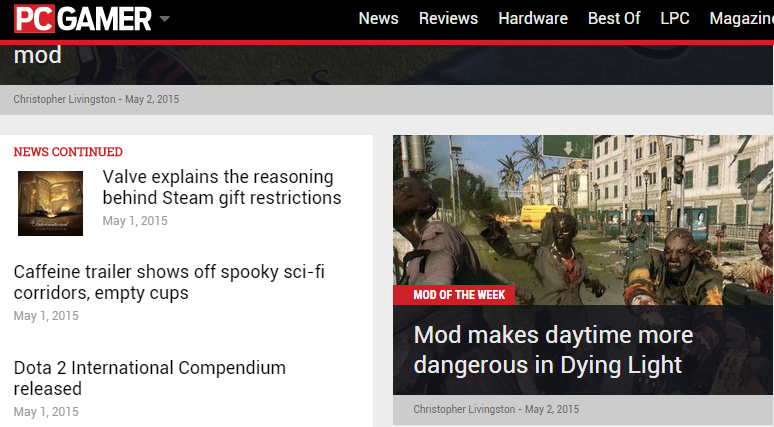 I AM LEGION - Mod of the Week article

The 15 most brutal mods of all time

Thank you for all the support! 15000+ downloads
Please make sure to Endorse if you enjoy I Am Legion!

1.26 The Pursuit
The latest and the greatest version of the mod yet, I have managed to pull this mod back from death with some encouragement from fellow modders and developers! Thank you for all the support and checking in to see how progress has been going.

The Pursuit now completely works with The Following Expansion, all dlc's, and most importantly the core of the game. It took a long time to figure out a way to take back control of the base zombie AI but we are back online! I have not had a large amount of time to add the rebalancing for three difficulties. I want to hear what people are seeing on the ground first before offering any variety to the mod other than player stats so I can take on problems without guessing which file variation might be causing it.

Here are all the gameplay features at their best:

This mod is compatible with Advanced Moves and many others as long as it doesn't replace any of the files IAL uses.

Environment
Storms and different weathers
Brought the variety of the weather systems to the Slums to provide more interesting environment.

Daytime cycle, time scale
Scaled back the time to make each hour ingame count as 8 minutes ingame.
This will help force the player to plan routes and head back to base before night sets in.

Fighting
Damage
Almost all if not every feature of this games damage system has been modified to bring more intense combat. Do not think you can take on the horde at a low level, evade and escape until you are able to stockpile the weapons needed to clear an area.

Gameplay
Rais's men are now armed to the teeth.
No more running around with pipes for these AI, there's a reason they have survived this long, and they are willing to slaughter every moving target if it gets them to their objective. Do not engage and avoid unless you have the ammo to take them out.

Ammo
Each level of difficulty is written to provide you with a different challenge when it comes to ammo. Casual survivors get the default amount but those of you who want the challenge will be limited on the amount of rounds you can haul around.

Bullet Penetration
Bullets and arrows can now punch through the undead!

Crafting
Overhaul of the crafting system to make weapons more realistic to construct and fix some of the weird combinations techland gave us.

Camouflage
Casual survivors enjoy the default settings for Camo, while those of us who love a challenge will not be able to run around and kill while covered in slim. Set to be similar to the scene in Season 1 of The Walking Dead, Don't think you are going out guns blazing and not be seen.

Fall heights and damage
Ultimate survivors have to deal with the fact that you arent superman, and because of that you will be limited in the distance you can fall before you shatter your knee caps. Plan your routes and don' try to jump 3 stories down without paying for it.

Fighter Experience
Lowered the default experience gained for fighting, as you will now how way more zombies to deal with.

Guns
Completely rebalanced all rifles and pistols in the game. The military rifle has the bonus of throwing rounds down range but suffers from rapidly expending ammo. While the Police rifle is great for single shot action and can help you pop heads. Be careful of the attention you will gain from using guns in the game.

Hook
Shortened and lowered your options when playing Ultimate survivor. No more throwing a hook while in mid air to save your neck, so make sure you have your feet on the ground before you attempt to escape.

Inventory
Lowered the amount of items you can carry at the start of the game for Ultimate survivors, once you start to gain levels this goes away.

Loot system
Completely changed the loot system in the game, make sure to look in all containers for different items, the trash cans can hold the item you have been searching for.

Monetary system
Completely redid the entire cash system in the game, no longer pay $14,000 for a hammer. Each item has been scaled back to a realistic price for the apocalypse, but so has your rewards and money found on the dead.

Night Spawns
Increased the amount of zombies who follow and come to your location, the enemy can now call to each other, they are hunting you from all directions now. Keep moving.

Sonar
Decreased range of sonar detection, cannot use while sprinting.

Stamina
Ultimate survivors must face the challenges of being a squishy mortal, no more throwing 1000x kicks to ward off the dead, if you are going to fight, make sure you have the stamina to do so.

Trader
Search for items to sell at the trader, you won't be walking away with 12 boxes of ammo for cheap, so make sure you plan ahead for how you are going to purchase your ammo.

Unlocked appearances
All skins unlocked. Look good while you die.

Weapons
All weapons (including DLC) have been altered to bring a more realistic force and durability, no more winning the game with the same wooden weapon.

Simply install Data3.pak into your Game install folder
Please contact me if there are any bugs!

I Am Legion Returns from the dead

Welcome back to Harran everyone. After a year of trial and error, I have successfully restored I Am Legion to 100% working status. The AI is back to its original intensity! This is 100% COOP compatible and ready! I need testers to jump back into the world to find the bugs with The Following and the new weapons! I will be releasing new content and fixes after getting feedback. New videos and tutorials coming!

Bring back I AM LEGION difficulty to Dying Light

Please sign the petition and hopefully enough signatures will bring this mod back. change(dot)org/p/techland-pl-bring-back-i-am-legion-difficulty-to-dying-light...

I Am Legion - The Pursuit

The mod has been updated to work with all the latest DLCs! Come find out more.

The largest and most features update since start of mod. New features aim to challenge and completely recreate the way you play Dying Light! Systems that...

I Am Legion Weekend Pack!

Ladies and gentlemen, we have come a long way. Thank you for all your support, donations and endorsements, comments and feedback.

100% Fixed to work with the latest version of The Following and base game. Welcome back to Harran.

100% Fixed to work with the latest version of The Following and base game. Welcome back to Harran.

I played Ultimate Survivor Nightmare for about 2.5 hours. It's broken AF ! Don't waste your time. You will constantly have several Virals running you down and killing you. Often it's 6-8 Virals at a time.
Remember you get tired really quickly at low levels !!!
You cannot complete missions because you cannot wander too far from a secure zone without dying.
Stealth is broken, line of sight is broken the Virals will immediately lock on you.
Also, virals often hit you whilst you are hitting them. There is not enough healing items to handle the amount damage you will receive (so you have to spam quitting and reloading into the Tower).
The AI is crazy efficient, I OFTEN had 4 Virals climbing up a building to attack me, so i kick them off, they don't die and just climb up again whilst another 2-4 Virals run across rooftops to attack me from behind.
This would be a good difficulty for mid game, but not at the start. [Dealing with Volatiles in Nightmare is easier than this]. May 2020

Can anyone confirm that this still works with Dying Light?

I've been wondering that myself, have you tried it out? There's been so many small updates I'm not sure what would still work and what would need adjustments.

Thanks for updating the mod! I had a balance question, is there any way for me to reduce the amount of virals spawned? I don't mind them appearing during melee combat, but it ends up just being an endless stream of them as the noise of more combat draws them back, and it's gotten frustrating. Their animations are kind of glitchy at the best of times, but having a constant stream of them just sliding around your attacks and hitting you with what appears to sometimes be invisible arms (the attack animations don't always match up right) is annoying.

I'm playing on Nightmare right now, which is probably part of the frustration, since most enemies take a bulletsponge amount of hits. I think I'd mostly like to reduce the detection range a bit so that nearby ones will come, but not an endless attack.

Additional note; I think I'm getting virals after me on almost any kill, even if they're fairly quiet or indoors. I have a few other mods on, but none of them affect the AI as far as I know.

To anyone asking, no it is not compatible with the latest update and dlc.

@jacobthehobo
Mod has been updated!

Single, Multiplayer & Co-Op
Tags
Embed Buttons
Link to I Am Legion - The Pursuit by selecting a button and using the embed code provided more...