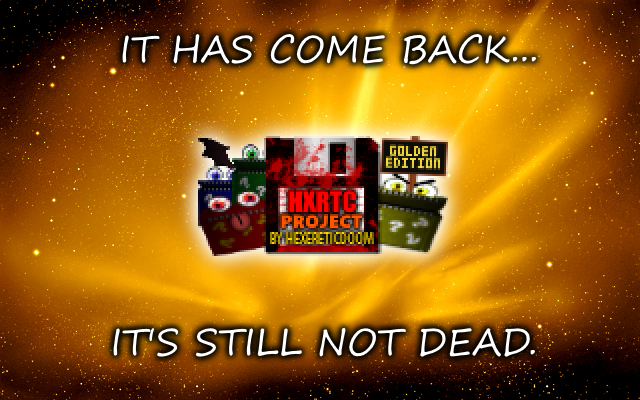 IMPORTANT: THIS MOD REQUIRES AT LEAST GZDOOM 4.X.X (OR LATEST RELEASES OF LZDOOM/QZDOOM) TO WORK PROPERLY. OLDER VERSIONS OF GZDOOM/LZDOOM/QZDOOM AND/OR OTHER SOURCEPORTS LIKE ZANDRONUM ARE NOT SUPPORTED.

The HXRTC Project is an addon for exclusive use with Doom & Doom II games, that means it won't work correctly with Heretic, Hexen or Strife games. However, it's fully compatible with many classic custom Doom megawads that don't alter the gameplay, monsters and/or weapons in a critic way. (For example, megawads using special definitions through DEHACKED lumps, unless a patch for them is created). You'll be able to play with HXRTC Project addon with megawads like Alien Vendetta, Community Chest series, Hell Revealed, Icarus, Memento Mori, Scythe, etc. Also you can use it with some auto-generated wads or megawads by Oblige or Obhack tools, so the fun can be almost endless!

If you don't have the required Doom or Doom II wad files to run this mod, alternatively you can download the FreeDoom Phase 1 & Phase 2 wads and still enjoy all your favorite megawads. Yes, the HXRTC Project is also compatible with FreeDoom! You can get the latest wad releases from the following website:

WHAT CAN BE EXACTLY FOUND HERE?

Well, as presumably and like many other existing mods, it adds plenty new things and features respect from the classic Doom. In fact, it has a huge bunch of new monsters (more than 200 different enemies actually, taken from several sources and customized specially for the mod), a large weapons arsenal (more than 50, including dual-wield modes) with also plenty of new items and new ammo types, and some exclusive abilities (in this mod the player has a bit more walk/run speed, can jump higher, has more health and armor capacity, and can enter in a 'rage-stage' if receives enough damage from enemies, doubling this way his attack power). Furthermore the monsters, weapons, ammo and items are totally randomized from one game to another, making player progress easier or tougher depending on map conditions and/or his luck.

In general terms, monsters are a bit harder in this mod than in classic Doom, but also the player weapons are quite more powerful than classic ones. Player starting weapon is a special pistol named Z-Gun, which has infinite ammo, but it's globally weaker than the rest of weapons, so like in Hexen game, it's better using it at first on weak enemies and save collected ammo for harder foes in latter levels. Also, some monsters have some special resistances depending of their nature elements (fire, ice, electric, stone or poison) so also some weapons can be less effective versus them than other ones. (More details in the mod's Help Screen!)

Killed enemies can drop (apart from weapons, ammo and/or items) coins and special treasures, which can be collected for increasing player's funds with the possibility of investing them buying some basic elements from Trade Shop Droids (special units spawned randomly in levels) like weapons, ammo & health refills, armors, special items, etc. There is also the possibility of meeting some special powerful allies to help you killing enemy hordes. Big bosses (Cybies and SM types I mean) will release a special prize for defeating them, a Mistery Box that can hide a lot of precious items or a nasty surprise, depending of your luck.

So well, all those features (and some more not detailed here) can be encountered in the mod, so if you're curious and want to discover yourself the rest of them, I recommend to download it and play it. Hope it will be a good and fun Doom experience for you! ;)

IMPORTANT NOTE: If you're experiencing some problems executing HXRTC Project addon with your current GZDoom or LZDoom version, please check for a more recent version in their webpages, development versions are often recommended:

HOT TIP: If you are a GZDoom user and you own a good/newer computer, you should load also the LIGHTS.PK3 and BRIGHTMAPS.PK3 files provided in GZDoom's main folder for a better experience in game. For example, HXRTC Project includes a lot of new dynamic light definitions, but if you don't load the basic LIGHTS.PK3 within the mod, some of them may get missing. On the other hand, if your computer is quite old and/or slow, deactivating use of dynamic lights through GZDoom's options menu could be a good idea for increasing global game performance.

If you are using the JPHUD HealthBar for first time and having strange screen issues, you should go to GZDoom's Main Menu > Options > HUD Options > JP HealthBar Option and scale the health bar resolution conveniently to your actual screen size.

This Doom project has been created mainly from arranged & fixed versions of WEAPONS OF SATURN weapon mod and DOOM MONSTER RANDOMIZER monster mod, along with lots and lots of edited extra elements (most of them from Realm667 website) and some other additional random generators/spawners coded by me, for making your oddisey through Doom a bit different from one game to another.

By the way, the HXRTC Project has been created from multiple sources just and only for fun. So don't think bad, I'm absolutely not earning any money from it in any way, not even in the hosting and downloading file action. Just please enjoy and play, OK?

ABOUT THE HUD: From some versions ago, the HXRTC HUD for HXRTC Project is now fully integrated into the mod's main file, so it's no longer necessary loading it separately on GZDoom.

For showing the HUD correctly, you must set in Display Options a screensize of 11 and turn off the alternative HUD. On the other hand, if you find the size of the HXRTC HUD is too small, you should open GZDoom's HUD Scaling Options and tweak the Fullscreen HUD override option to the most suitable value for your computer (this can vary quite a lot depending on your current screen resolution, so try several values pressing Left or Right cursor arrows until you find the most appropriate setup for you).

Hope you have fun with the HXRTC Project mod. Enjoy and have a nice Doomsday! ;)

I'm having some issues with this mod. I have the latest release version of gzdoom, I reinstalled it, tried launching the main file alone and with mods both with and without zdl, but I don't think its working. the hud never shows up, no special options or weapons. could I get some help? I've only ever modded with brutal doom and project brutality but then I got a bit sick of it.

nevermind I redownloaded and it worked. awesome mod. will be playing some more

it's cool to see that this is still being worked on and expanded :)

What WAD do you recommend to play this Mod? c:

You've really outdone yourself with this gigantic super mod Hexeretic, I have not had this much fun with a doom mod in a very long time.

Thank you for making it!

Wads won't show up on my file explorer

What is the order in which each files has to be loaded in ZDL? The mod works, but I can't see the hud, just the healthbars for enemies.

Hello, you should load first the H-Project Final Edition main file, then the rest can be loaded after it at any order, although I would personally recommend to follow the next one:

For displaying the HUD correctly, you must set in GZDoom's Display Options a screensize of 11 and turn off the alternative HUD. And if you find the HUD size is too small, you'll have to adjust a few sliders on the new GZDoom's Scaling Options.