Hunt Down The Nihilanth

YOU ARE THE VILLAIN...
It's time to tell the story of the villain. Hunt Down The Nihilanth takes you into a journey like no one has before. Witness the pain of the villain firsthand with over 4 hour gameplay, over 4 levels, immersive gameplay, cinematic cutscenes and an over an hour long, heart touching memes.

GEAR UP
The player picks up the boxes of Supply Clerk Private Mitchell, who finds himself AWOL after a shortly after being called a homosexual slur. Mitchell is thrust into a battle of survival and is forced to face challenges to survive the United States Government. This marine has to use all of his training, both with counting crates and crippling alcoholism, to walk across the levels. Mitchell has to manage his inventory with over ten default weapons and stolen from FPSBanana, find the best way to get the job done, and do whatever it takes for his own survival.

First off, I've been trying to avoid writing the super cliche "Boo hoo I have a real job I have to do too" mod updates, but I feel like staying silent is unfair to the few of you following this mod.

So lets get into the cliche!

Real life: I've had quite a few life changes, I won't go into the details, but this has somewhat hampered the development. Things have calmed down a bit so I hope to pick up the pace on development now. And encase you didn't know there is just me working on this mod. I have had some valued help from some good friends but overall the story, jokes, maps and model hacks are all me. This has it's own advantages and disadvantages. Biggest down side is the amount of work I've created for myself.

Expanding Scope of the Mod: When I first started this mod I was planning on only making a really bad map pack mocking HDTF. That turned into making an actual mod but with bad maps. And then that turned into making a full on story making fun of HDTF. And now we're here, with a big idea and one person to churn out the work. My promise is that version 1 will be a full length meme mod with relevant jokes running on the stock HL2 engine but with so many tweaks and hacks you'll think I knew how to code C++. The reason the first version of the mod was able to get put out so quickly was because I recycled many of my oldest test maps (and one released one) from when I was learning how to use Hammer. Since I'm putting more effort in I'm having to make (almost) all new maps.

Inability to share updates without spoiling the jokes: Something that drives me nuts is that I have made some awesome progress on the story and characters but if I share that information the jokes for the game will get spoiled and the first play through of the mod will not be as funny.

Passage of Time: Due to me slowing down development of the mod some of the meme jokes in the game are out of date. Which can be a bit of a pain to keep up with but I don't want my game to pull a Duke Nukem Forever and have jokes that have aged 2 years old.

I've learned more things: I haven't learned how to code for C++ but I have learned how to use Faceposer! And it has really improved the way I make Hammer NPCs. Ironically not using it to pose the character faces.

Progress has begun again: I have a new computer and have finally have found the time to make more progress on the mod. I can't promise this means I'll do consistent updates or even that it'll be finished in a few months but progress is progress.

A goal for the story is settled: With the exception of updating jokes, the overall story is finished and I'm not swaying into developer hell continuing adding more and more to it. I have a plan.

Thanks for reading my excuses!

As a reward here's a picture of some content. It shows a WIP suit intro, a 3rd person driving view, a test turret and friendly Marines in the intro. There's more than that I can't show due to story spoilers. 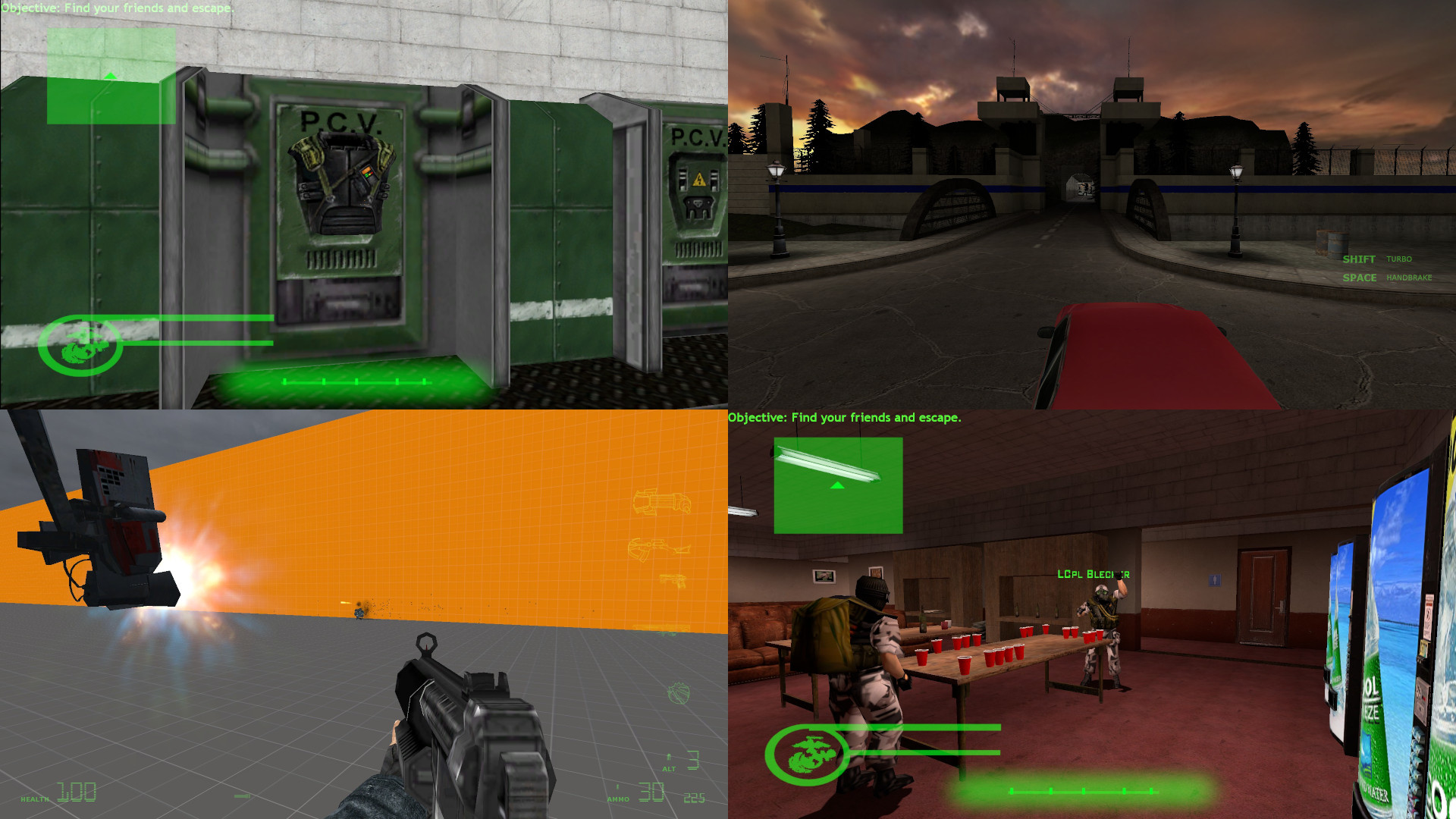 Slight hiccup in the development of the mod......

Hunt Down the Nihilanth Preview

A handful of updates to tease you thirsty bastards.

More Delays as is Tradtion

Obviously the only good mod is a delayed one......

Wow, a Half-life game that gets pushed back on its release schedule.

Hunt Down The Nihilanth - Version 1

Hello everyone and welcome to Hunt Down The Nihilanth Early Access. Why early access? Well because I made this mod in a month and if I don't have much...

Hey! I streamed some gameplay of this mod! Awesome stuff! Here's my video review!

Any chance you're working on anything else?

Nope, just working on HDTN. Might make some other meme mods once I get it done.

I have started up again. Progress has been slow due to some life changes and the scope of the mod expanding.

I had a mini heart attack when I read the title of the update. Hard drive failures are what cause lots of mods to be cancelled. Just send the hard drive to a recovery team, they will put the disk inside a new hard drive. What hard drive are you using?

In my case the hard drive failure is unfortunate but it'll give me a chance to reorganize the mod. I have original files, the set back is mostly setting up Hammer and my tools again. Since the mod started as a joke the organization was horrible. And the increased scope of the mod made it worse. Once I get a new hard drive I'm going to spend some time structuring the development, once that's done maybe I'll have more regular updates!

Single Player
Tags
Embed Buttons
Link to Hunt Down The Nihilanth by selecting a button and using the embed code provided more...