Will you be the true Hero that rids the world of evil...? 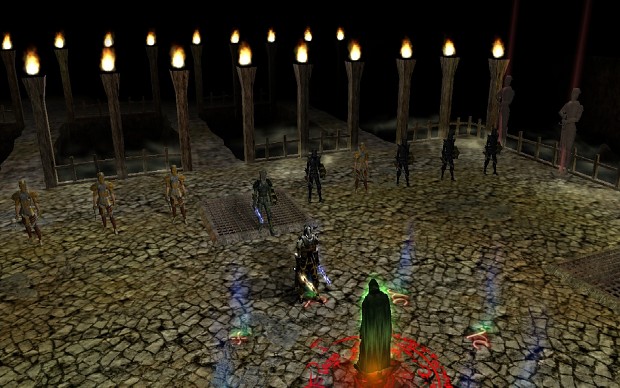 Prologue:
You are the sibling of the Hero that discovered the "Kingdom of Crystals". With your Father gone missing, and a huge invasion by an undead army on a neighboring island known as St. Lorion, you will soon embark on a life changing mission to save the world. Will you have what it takes to lead your people to victory? Will you have the wit, intelligence and will to solve the multitude of puzzles, defeat the unique monsters, and discover the hidden treasures along the way? Your life-changing journey awaits you...


Game Play:
This game is desinged and fitted around a fighter class (Fighter, Fighter/Rogue Combo, Paladin, Barbarian, etc.) and all the gear and upgrades will support this class. It is considered Hack-N-Slash but uses unique encounters throughout the game that hack-n-slash alone will not solve. There are a multitude of original puzzles to solve (kind of like the old Zelda games). Each of these challenges or puzzles helps you in your progression throughout the game. This game is a serious game and will take 60+ hours to complete if not using the complete walk-through. It is broken down into two parts.

The first half: Takes place in the city of HeavensGate where you will begin a mission to improve your fighting skills and self-defense. This allows you to learn your character and define their skills before taking on the harder, second half. You embark on a multitude of quests that you must solve for the Prince and citizens of HeavensGate. You will build up to 6 or 7 levels of experience before you take the trip over to the island of St. Lorion to start the investigations of the Undead invasion. The first half ends with a mind blowing and challenging event that you must enter, known as The Great Arena Challenge. You will have to win each trial in order to move on to the next one. You will have to win twelve different and unique events in total in order to pass the trials. It ends with a twisting, plot driven scenario that leads to the second half of the game. This challenge is meant to be tough and is the climax to the first half of the game.

The second half: Starts when you sail over to the island of St. Lorion to investigate the Undead Invasion that took place. The Undead Army stole 12 ancient scrolls that you will enventually need to get back for the people of St. Lorion. You will also be driven to find out what happened to your Father who went missing. You will dive deeper and deeper into the hidden world of the Undead Legion until you and your eventual army take on their top leaders. The second half will allow you to build resources and eventually purchase god-like gear which you will need in order to defeat the end-game. So keep your eyes out at the weapon shops, armor shops, and magic shops to get your shopping list going. You will also gain valuable items throughout the game by doing the vast amounts of quests and mini-quests. Expect to be level 19 or 20 when the game is over.


Game Info:
This game comes with a 31 page walk-through that takes the player step-by-step on how to complete every zone in order to win the game. I recommend that you ONLY use this if you are absolutely stuck and do not know what to do. I also offer my email to answer any other questions you may have about the game. I know there are not a lot of NWN original players left out there, but for those that are, I hope you find this game fun and challenging.

Built with Diamond Edition v1.69 (SoU and HotU and KM) - No Custom HaKs

TIP:
For those wanting an easier trip, level a character to 2 or 3, strip them of all their gear, then use that character to play this game. A level or two ahead makes it a lot easier for those not wanting the full challenge of this game.

About the Author:
My name is Brad Bartram and this is my third serious NWN module that I have built. I knew nothing about scripting in 2008 when I started my first NWN module, and still remember the frustrations and late nights getting one simple thing to work. I was determined to complete my story and finally completed my first HeavensGate, Kingdom of Crystals. I was nominated by NWN Vault for Debut Author of the Year in 2008 which I found rewarding for my efforts.

HeavensGate 2 is the result of all the learning I put forth in my first and second Mods. This is a much more organized and polished example of my work. It has a solid story-line and a very linear progression which makes it very easy to know what to do next. I also threw in a multitude of unique creatures, puzzles and quests to keep things exciting. It will challenge the best gamer if you do not use the Official Walk-through... It is 100% original (except for Citadel of Anguish which I threw in because I missed my old EverQuest days)

It is hard to please everyone, I just hope I bring joy to some people out there that appreciate my creativity and work. Feel free to shoot me an email if there is any other info you seek. Enjoy your journey and Good Luck!
getbrad@hotmail.com

HeavensGate 2: Islands of the Undead Legion Official Walk-Through This is a 31 page guide on exactly how to beat this game. It is broken down by sequence...

You are the sibling of the Hero that discovered the "Kingdom of Crystals". With your Father gone missing, and a huge invasion by an undead army on a neighboring...

Why not upload it to the vault?

Sorry it took so long to get back with you... I was just not sure there is demand for original NWN modules out there. I would love to send this mod to an existing pool of original NWN die hards, if there is such a thing.

I went there but they did not even have administrators anymore... The site looked dead. I figured this site was one of the best. It's a shame too that most people have moved on from the original NWN modules beacause I think they would really enjoy this one!

Oh but we have Admins, in fact I'm one!
Sending you my e-mail right now.

Ummm? How did I miss this? I can't believe such a big release skipped the radar on Moddb. I'll have to try this some day.

A World of Ice and Fire (Game of Thrones)

Welcome to A World of Ice and Fire. A modification for Mount&Blade: Warband based off of GRRM's A Song of Ice and Fire and the HBO TV show Game of Thrones...

Kingdoms of Arda is a Singleplayer & Multiplayer total conversion of Mount & Blade II Bannerlord, that brings the world of Tolkien into the game. This...

Silmarillion is a total conversion modification for the game, Mount&Blade II: Bannerlord. It is going to be based on the famous books of J.R.R Tolkien...

A Strange Privileged Life is a Neverwinter Nights story-driven module where the player is a detective who is tasked with solving a number of mysteries...

Beyond The Dead Arising is a horror fantasy RPG set in a dark, grim and gritty world. You take command of a traveler who has ended up in The City of Northan...