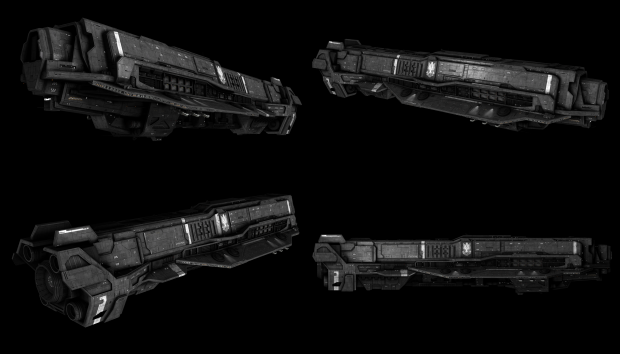 Now I've stolen it from one of you!

Dat stern look I'm giving you for this comment...

Great work in keeping it to the lore design.

As a lore puritan

This is exactly what I was hoping for. Perfection!

The last bit of paint has finally dried on the new Punic-class Supercarrier so now you get the formal release renders!

This version of the ship is based on the Halo Fleet Battles model of the Punic. Malcontent actually had the ship for a time and used it as his reference point. However, along the way, certain changes were made to give the ship a more distinct appearance from the Epoch-class Heavy Carrier, primarily on the prow, but in other places as well.

The space you notice in the undercarriage will have towed ships to aid in her defense.

The decision to go with something closer to the canon ship's appearance was not made lightly, many SotP fans have enjoyed our takes on how a Punic might look and it's not uncommon for us to see comments from people who prefer our "fanon" take on the ship. However, our approach has evolved over time to where we feel it's better to try to tweak existing designs that we feel have issues or concerns rather than wholesale remake ships that exist in the canon. The intent is to maintain the silhouette for the casual fan while adjusting areas that feel off.

If you've enjoyed the look of our "fanon" supercarrier, you'll likely enjoy some of the ships coming to the mod a little later.