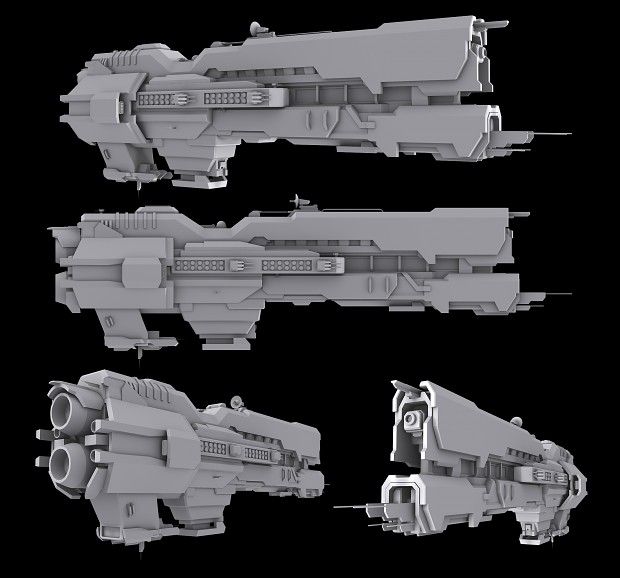 I just have one question: How does it compare to the Halberd?

Really cool that 343 gave you a scoop of it's design.

I'm wondering that too. Maybe it's even more alpha-strike focused? Halberd has decent archer pods after all. A missile-heavy alpha strike sounds troublesome, though. I expect to see a lot of Ares launched at targets about to be MACed into oblivion; I've seen that happen to a lot of nukes.

Based on our current ideas for the ship, its Ares missiles will basically take the place of archers that are found on other UNSC ships. They'll be pretty good at short duration spike damage and have a longer recharge time (around 15-20 seconds) so they will be very solid secondary weapons. The main draw for this ship would be its ability to consistently saturate the target with Ares barrages and deck gun fire, which would be great at keeping health and shield recharge at bay.
Definitely won't be as tanky as a Halberd and much more focused on dealing considerable spike damage in waves rather than the pure alpha damage Halberd.

I like it. It gives it a niche position in every battle group.

High-quality and crisp work as usual. I take it that these destroyers will only be available to Insurrectionist fleets for the moment?

Thank you kindly! And no sir our plan is for you to be able to build these boys yourself. The Innies will have a few of them laying around for sure but you'll be able to have them with your fleet.

That's a nice looking ship - is it the class that the Heracles was (the ship that led the small battlegroup of the Arabia and Vostok to Harvest)?

**Considered overkill and out matching even UNSC ships of the time, the Hillsborough-class light destroyer was introduced in 2420 and was an unmistakable symbol of CMA military might in its heyday. Its state of the art MAC, Titanium-A plating and fearsome inventory of M280 Ares anti-ship missiles made it adept at tearing into any target, and it was feared for decades after its introduction.

Unfortunately, the Hillsborough became functionally obsolete by the beginning of the 26th century, but still reigned supreme over what little naval threats the Insurrection was able to muster. However-it was massively outgunned against even some of the lightest Covenant warships, and by 2527 the class had been either scrapped or relegated to rear guard fleets and internal security roles.**

Hello all! Been a little while since you got a peek under the hood of what's going on at SotP, so I put together a few renders of this fancy new ship that will be hitting our UNSC roster soon. 343 Industries was kind enough to give us a bit of an inside scoop on this ship's design and technical details, and we are very excited to have it in the game. Expect to see it as an effective 2-stage alpha strike ship, battering enemies with its MAC and a heavy barrage of Ares missiles for impressive damage.