May Status Update. Sneak peak at some of the upcoming changes for GoldenEye: Source 5.1.

For the past many months since 5.0’s release we’ve been hard at work behind the scenes preparing what is coming next for GE:S.

Moving forward we would like to be more open and keep the community more up to date with what we are doing, and first off we are happy to announce and show a little preview of two of the maps we are presently working on.

We would like to introduce you to a level that is not that well known. ‘Citadel’ was a test level found on the original game’s ROM by using a GameShark on the GoldenEye cartridge. In the past there have been community versions of this map, but the level is now being incorporated into the game and given the full treatment. 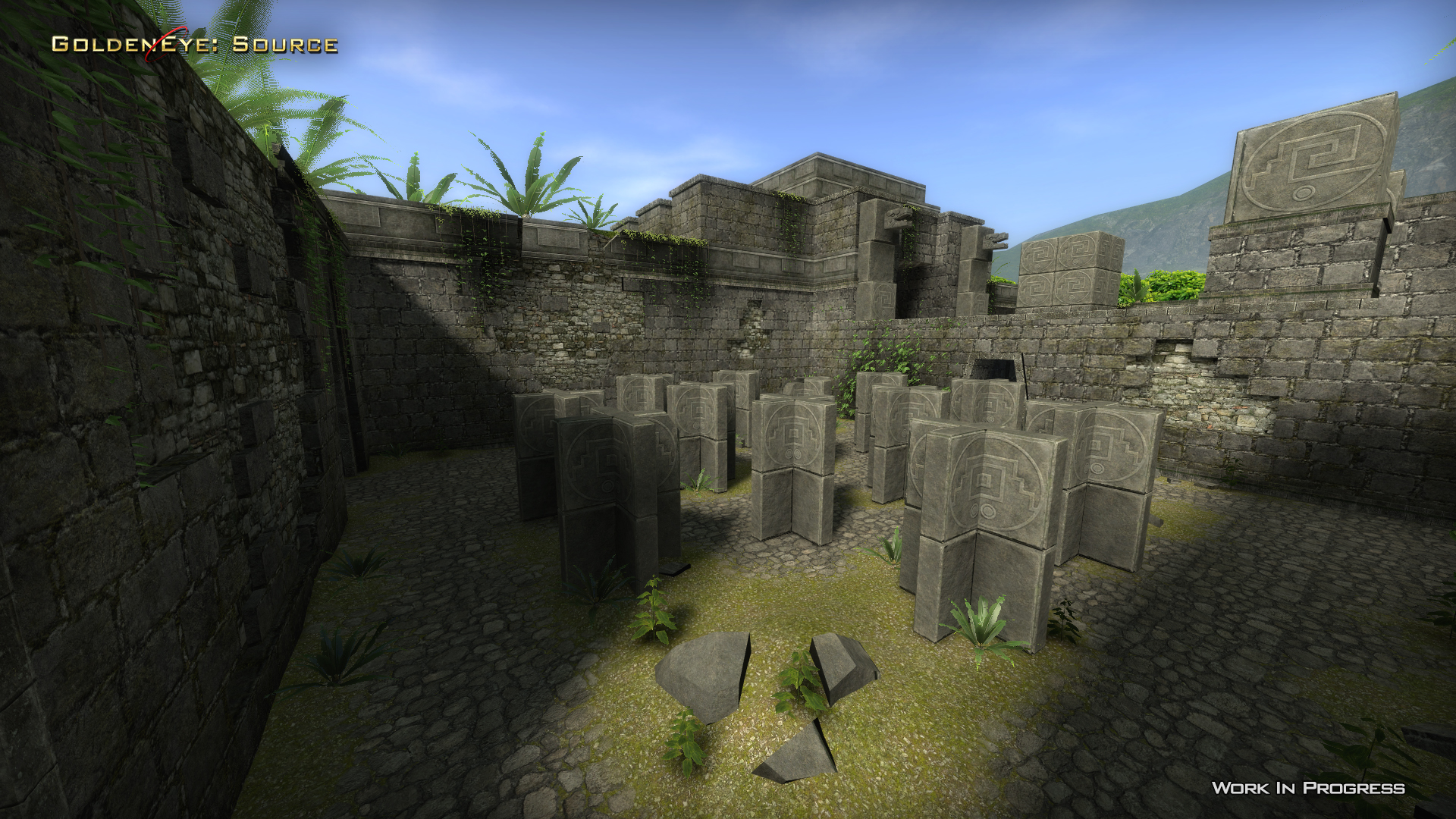 I would never choose the caves! The temple, maybe.

Temple is a map that has long been absent from GoldenEye: Source. Whilst there have been various versions in development over the years it has never quite made it all the way to completion. The map has now been completely reenvisioned and given it’s own unique theme. 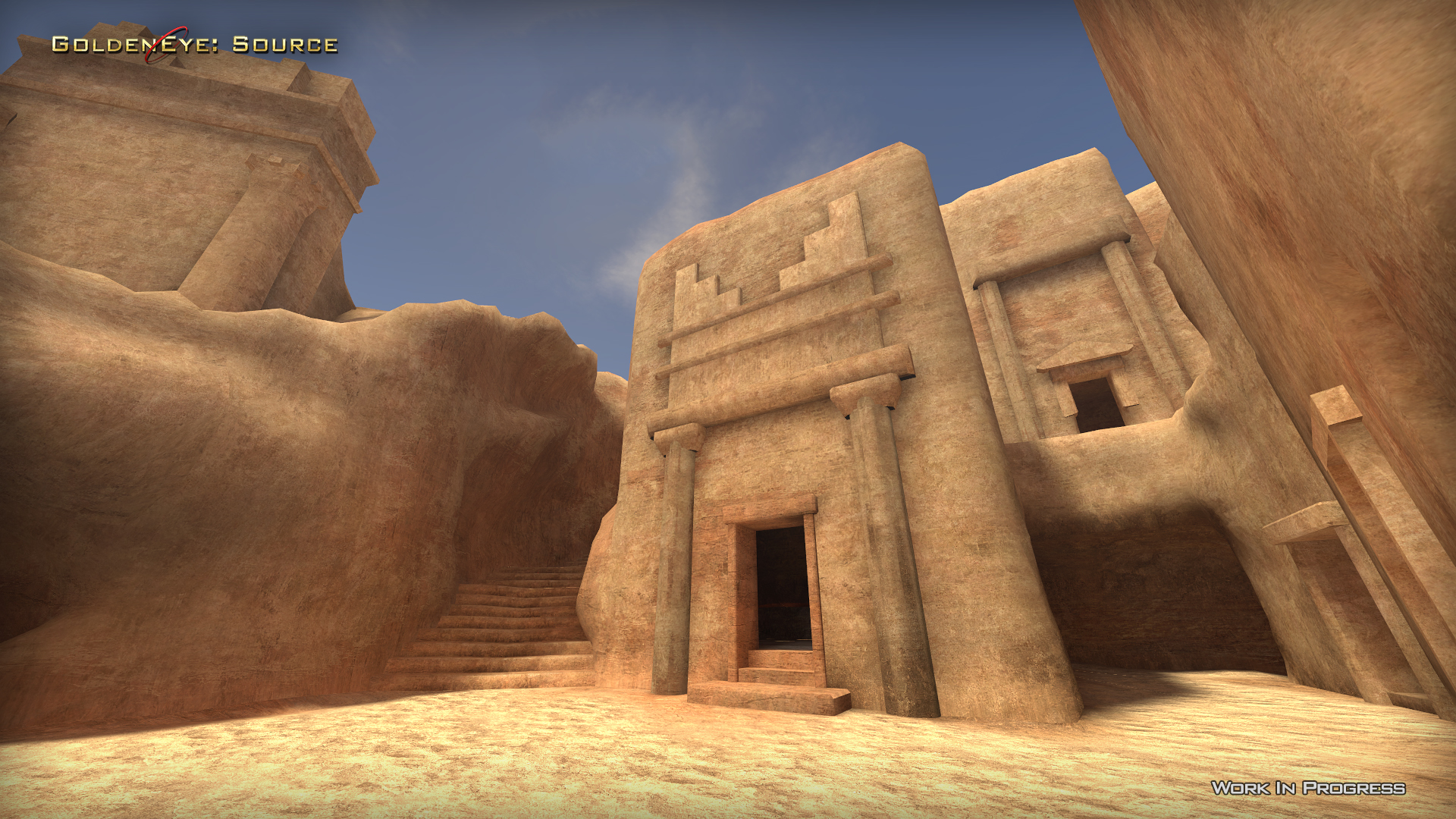 With two new levels there might have been a gap in our Soundtrack. Never fear! Tweaklab has been hard at work and would like to debut some of his awesome beats.

“I wanted to take the Citadel track from the original game that was only used in multiplayer matches and make it feel a bit more tailored to a specific map, keeping the original tempo while adding more layers to the track to give it a greater sense of progression and ambience.”

“I was encouraged by the team to have a go at writing an original track for the game and it all started with the main chord progression which utilizes a few familiar notes from the traditional Bond theme, everything else evolved fairly naturally from there. I wrote the track with the idea that it was almost like a remix of an original N64 track that no one had ever heard before and there are lots of cool ominous sounds like pan flutes and monk choirs in the mix to keep the atmosphere front and center while the beat drives the track.” - Tweaklab

Moving forward with our initiative of improving the way that weapons feel and act in the game, each weapon now has an increased number of sound effects associated with it. Pistols, Rifles, Mines, Shotguns, Rockets and so on now have distinct pickup, ammo and reload sounds for each type.

Building on our adjustment of their ammunition types, the Gold and Silver PP7s now have distinct firing sounds to help distinguish them both from each-other and the standard issue PP7.

The soundscape of the game is now more satisfying and delivers much better audible feedback on what is happening.

One of our big goals with the upcoming 5.1 is to greatly improve the experience players have when playing the game. 5.0 was a huge milestone and step up in the quality of the mod from past versions but we still see great room for improvement when it comes to making the game feel more intuitive and enjoyable. Certain lingering issues in the gameplay were made apparent by 5.0’s release which we’re working towards fixing, including changing a few Source engine defaults that fell outside of the design of our game and went under our radar.

The main one is of course the maximum server player count, which can be set as high as 32. However, GE:S was never designed to accommodate this number, and having such a large amount of players on one server causes several problems that result in a poor gameplay experience. As such, for 5.1 this will be capped to a more reasonable 16 players. We hope everybody can understand that we want players to have the best experience of the game possible.

PSA: Please keep this in mind if you’re running a server as 16 will be the maximum number of player slots supported once GoldenEye: Source 5.1 releases.

We would like to thank the community for their amazing support following the release of 5.0. We’ve been blown away by how much the game has grown and all of the positive attention we’ve received around the web.

In case you missed it we recently had an interview with PC Gamer, you can find it here:
Pcgamer.com

If you’re a YouTube or Twitch streamer and would like to stream GoldenEye: Source, please do! Our original soundtrack will not get your content flagged. Please contact us if you do have any issues.

As a team that is always growing and adapting we would like to remind everybody that we are always looking for new talent. Please check our open positions Geshl2.com page if you’re interested in getting involved and helping us to create this game.

Hello, could you please release the weapon sounds or tell me how to extract them? I would love to use these weapons sounds for other games.

Nice that yu are still working on the project, thumbs up !
Are you ever trying to make singleplayer or coop campaings ? (i would love to see that)

Keep up the amazing work! Glad to see Citadel is getting some recognition.

I too, am curious about possible single player campaigns, but I know with the small mod team you have that it's extremely unlikely. We can dream.

Why would you hard cap servers to 16? You are basically cutting yourself off from being played at LANs where attendance is in excess of 16. We routinely have 20-30 person LAN parties. Such a bummer.

If only you were able to create a second server...

The new 16 player limit certainly isn't set in stone, we just want to make sure that we have a way to make sure people understand that 12-16 is supposed to be the standard before setting it higher. Before 4.2 we didn't seem to have this issue, but a lot of groups in 5.0 seemed to assume bigger was better and went all the way to 32. Certain systems start breaking at 24+, though that's fixable, and the viable map selection becomes rather limited for anything past 16. Not even Aztec comfortably hosts 32 people on any configuration. That being said there are totally viable 20-24 man server configurations, like teamplay on the biggest maps as you said, but we didn't see nearly as much of that as we did 32 man basement classic with everyone complaining about the spawning system.

So, hopefully once we figure out how to better regulate that we can go up to at least 20, if not 24. It's certainly a niche, since nearly all maps are designed for <16 players, but it does feel kind of bad to bar that option entirely for people who want to use setups that actually benefit from the higher playercount. Might have to be a project for 5.2 though.

will i still beable to use my skins