It's 2214, and you're a Landraker, a guard of Lockport, New York, the hub of trade in The Sanctuary of Niagara. The Sanctuary of Niagara is a paradise, a thin strip of clean land along the clear Niagara river, caught between the irradiated cesspools of lake Ontario and lake Eerie, and the smoldering craters of Buffalo NY and St. Catharines Canada.

Twenty years after the Great War, Vault 67 opened and it's inhabitants, the citizens of Niagara Falls USA and Buffalo NY, took stock of the situation and immediately began to rebuild with their G.E.C.K. In 2198, they founded The Sanctuary of Niagara, a republic ran by a board of elected representatives, judges and the overseer of Vault 67. He made quick work militarizing his people and taking ownership of the cities of Niagara Falls USA and Niagara Falls CND, and built a chain link fence as a symbolic declaration. In the following years The Sanctuary used the G.E.C.K. to purify the falls and monopolize clean water. As their ownership was tightening, however, trouble came from the east.

The Third York Republic had been founded by the residents of Vault 97, which housed the people of Rochester NY. After a year Vault 97 had lost lighting and air circulation, and within 10 years its residents had clawed out. They wasted no time trying to find other survivors in New York, and after failing to reach other vaults and discovering New York City had been destroyed, the survivors overthrew their overseer and formed a democracy, and began their slow march through the state, finding sane ghouls and lucky people who survived in their basements or homemade shelters or untouched country homes. By 2200 The Third York Republic established a permanent congress, house and supreme court in Albany, and it's government was unanimous in its decision to finish unifying New York, and to bring it to its former glory by any means. To The Third York Republic, America was dead, all that mattered were its own people.

The Third York Republic discovered The Sanctuary of Niagara, and Vault 67, the only Vault in New York which had a working G.E.C.K. It was decided that Niagara had to be acquired, so they opted to take over Niagara through political influence. They annexed the colonies Roosevelt Beach, Newfane, and Wrightes Corners with eyes on Lockport to control the region's trade.

Before the war, no vaults were built in Canada, so most Canadians in urban areas died. However, an unofficial fallout shelter had been built before annexation in Welland. About 1,000 Canadians survived in the Welland Shelter, and in 2199 the New Canadian Regime was formed. Distrustful of Americans and bitter from the war, the New Canadian Regime was a military first and a republic second. In a single year every surviving Canadian in southern Ontario was recruited to the cause, and brought to Welland, their capital.

The Sanctuary of Niagara banned all ghouls, so a colony began on grand island in 2202. By 2206, Grand Island became a democracy of farmers and tradesmen, distrustful of government. Criminals and the abused fled the other factions and found a common hatred for powers on grand island. With some technology stolen from The Sanctuary of Niagara, several of these people founded their own new Tonawanda, dedicated to Independence and survival, not rebuilding. (there are also 3 lesser factions at play. There are raiders, wanting anarchy, there's Tesla Niagara, the actual faction beneath the falls who control the power generators, and the Brotherhood of Steel, who are despised for being outsiders and are persecuted as if they are the enclave.)

Over the years tensions continued to grow between these forces, and in 2208 the small colony of Sanborn ordered a peace conference between all forces in New York. Tonawanda, Lockport, The Sanctuary of Niagara, and The Third York Republic all signed. The New Canadian Regime held out.

It's 2214, and you're a Landraker, a guard of the Brahman Traders of Lockport, New York. One day your fellow guards capture a spy, a communist, and you realize there is a vast network of commies at work in the Niagara region. Any city could be in on it, all you know is the commies are after a weapon of mass destruction, and absolute control of the clean waters of Niagara Falls You set out to find the commies, their kingpin, and secure the status quo and tense peace of the region, and if you fail, the forces rising to power could start a new resource war, and destroy the only chance they have at a survivable future.

Still irradiated and much further from healing than the Commonwealth, the Niagara Wasteland is filled with tough enemies, large dungeon-type cells and little ammo, medical supplies or weapons. Without companions for much of the game, you'll be on your own, an army of 1 in a world that feels turned against you. 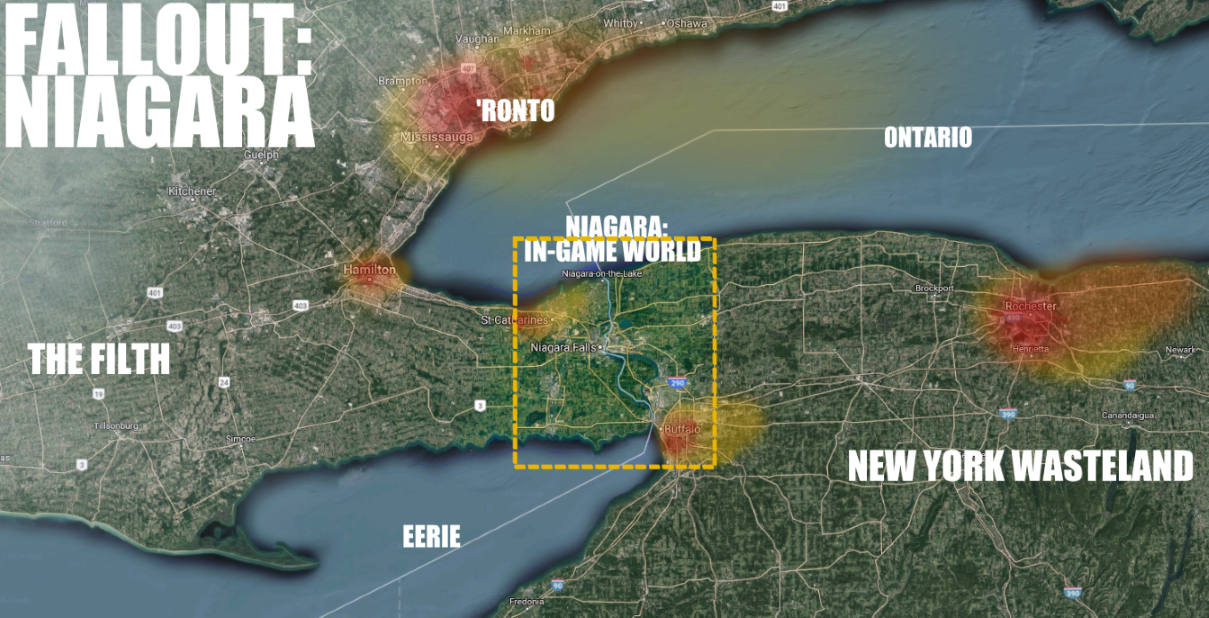 Fallout Niagara Begins in The New York Wasteland and the areas around grand island and Niagara Falls will be the focus of the mod's story and experience. The Ruins of Buffalo and the region of Welland, Canada are lower priority and focus, but will also feature in the mod. In sheer size, Niagara is a bit larger than Far Harbor.

In addition to this overarching story line, there will be side quests and random dungeon-type-places to explore. I am and will continue to try to make each location feel unique, original and interesting, and am looking at 50 to 100 specific locations (think all the places in far harbor and all the places in nuka world).

There was a lot of great stuff in the Fallout 4 artbook, and it has served as my main inspiration for some locations in the game, some planned mutants and several characters.

This mod is a passion project of mine and, while i hope to have a workable build by late 2018, this is just a hope, there is no release date and I cannot promise that the project will see the light of day at all. That being said, I will try to post more information and updates regarding the mod every month or 2, starting with January 2018.

Its been a long time. Since August a lot has happened:

- I got a small team of coders

-after a few months they all moved on to new things

-my PC died and my flashdrive with backups went through the wash, setting me back to where I was last june or so.

I got frustrated and took time off but am happy to say the mod is still in the works, still planned to come out as BETA in late 2020. However, I'm no longer sure the mod will have a proper big main quest, might end up being looser or more along fallout 3's "a series of side quests is a main quest" philosophy.

Starting today I'm opening the mod up to volunteer members. If you have ever wanted to contribute to an ambitious open-world fallout mod, now is your time to offer, no matter your skill level. I need the help since I've lost most of my own team and have kinda been pushed months back in development.

If i can't get a team, I will simply keep the scale of the mod smaller.

please feel free to reach out or ask any questions you want!

The Future of the mod

You have new ways to see mod updates. Since ModDB always breaks on me the main channels of updates will now be youtube and tumblr.

A brief overview of progress, changes, and what's coming.

Opening a discord for Fallout: Niagara. Check it out if ya want.

OMG Lewiston is my hometown! Though I haven't been there since I was eight, which is many decades ago, lol.

I would love to be able to visit my old house and see if it's crawling with ghouls or whatnot. Love to see the Power Plant too; I remember going on tours there!

It may be enough to make me take up mod development myself... I've done some voice acting, some 3d modeling, graphics, and I am a coder by profession, though I've not written code for mods yet.

I grew up here and I am currently a Stident at UB. Please make it so UB North Campus is occupied by the Enclave and let us help with the names and backstory of the Enclave General and Officers!

Love the look of it, can't wait to upgrade my fallout 4 to something worth playing, let me know if you need help with voices, I'm looking to start voice acting and would love to help if able

Engineer Has Seen Everything Half-Life 2