Fallout Cascadia is an upcoming new world mod for Fallout 4 set in a retro-futuristic post-apocalyptic version of Seattle and the surrounding areas. Users will start a new adventure entirely separate from the main game. The scale of this project is closer to an expansion or DLC. We currently have many excited team members working on this project to the bring the Pacific Northwest to the world of Fallout. Inside the mod, players will find new quests that challenge them mentally and morally, locations that tell a story, and factions that are vying for control. Release Date TBA

Thanks for voting and helping Fallout Cascadia on it's quest to become the 2022 Mod of the Year. You are now in with a chance to score some free games from our #modlove collection. Help this mod secure more votes by embedding the widget (or link) we have included below on your favorite sites.

Welcome back to the Fallout Cascadia monthly update, this time for the month of September. As always we’re very excited to tell you all about what we have in store for the project. Work has been progressing at a steady pace, with some big strides made in the sound and music departments specifically. Let’s take you through what we’ve been working on.

Our music and sound department encompasses both our voice acting and soundtrack teams.. We’re happy to welcome independent recording artist Jesse Gunn (Warmer). Warmer has several albums under his belt, as well as a soundtrack to the acclaimed PC indie horror game “The Cat Lady”, and fan projects including Silent Hill Requiem. 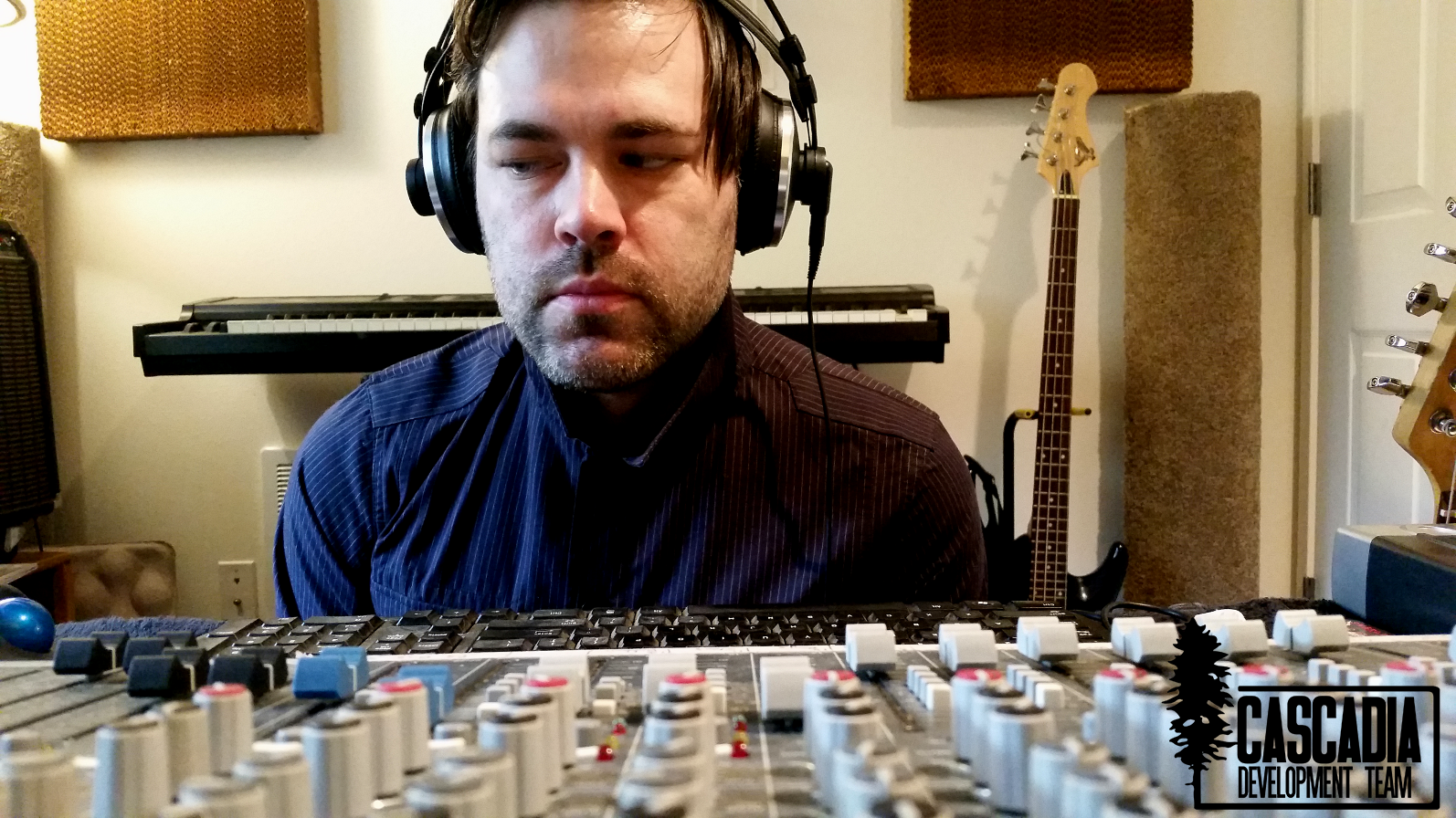 Although voice acting is still a ways away for us (and we will let you know when the time is right for applications), we have Shaun Roland, frontman of the band Starving in Style assisting in test recordings and narration for our mod. Shaunzy is working alongside Warmer to capture the genre staples of grunge music (a big part of Seattle culture) and transform them into a sound that fits into the Fallout setting. We on the team are excited to see how this experiment in genre shifting turns out for our mod.

The level design team continues their climb towards building the world of Cascadia in the Fallout 4 engine. The first big metropolitan area is being finished. The city of Kent (which replaces Renton for gameplay and lore reasons) is being brought up to a playable state. We’ve decided that the player will start their journey here, at the border between the New California Republic and the Republic of Cascadia. 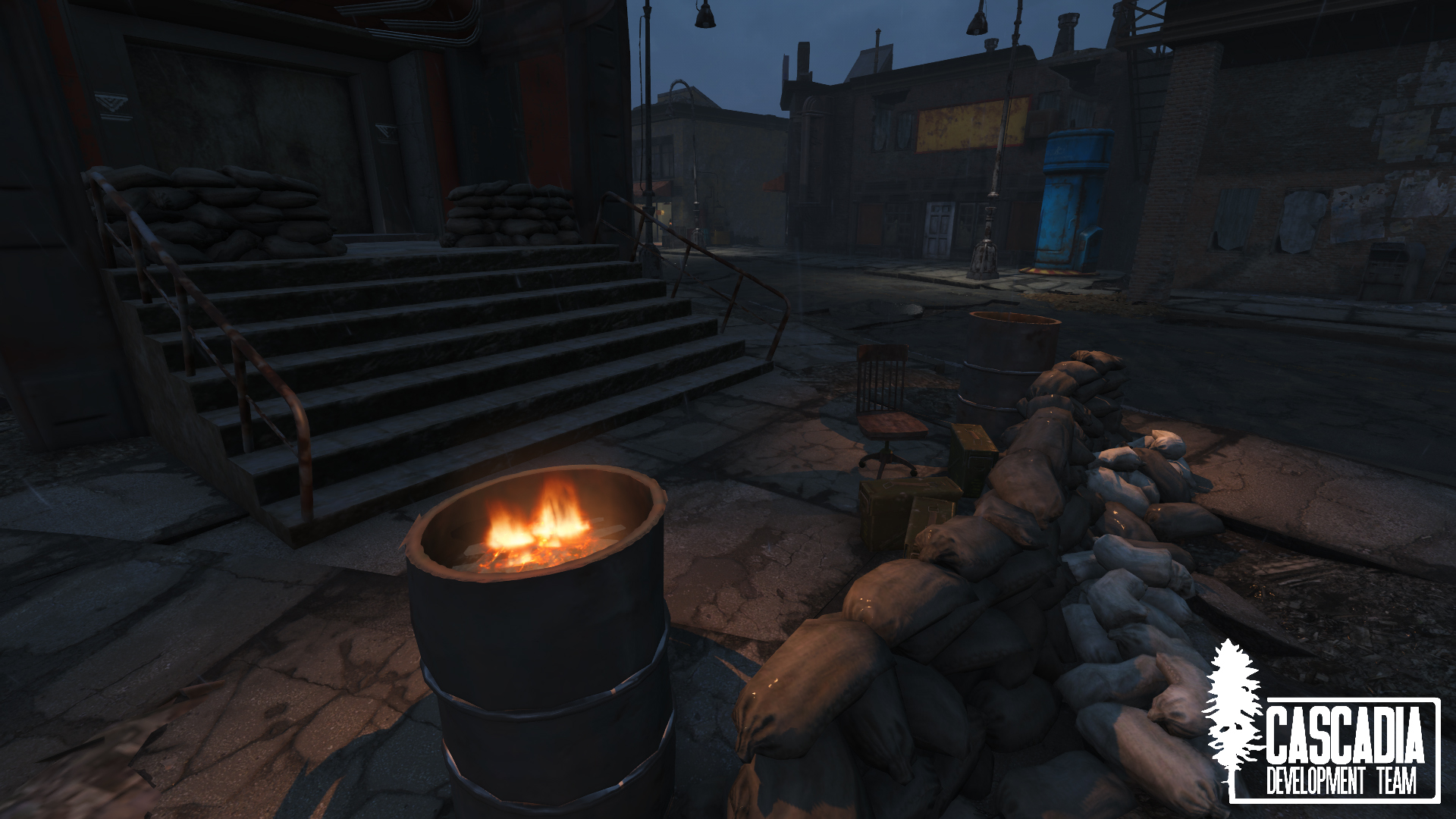 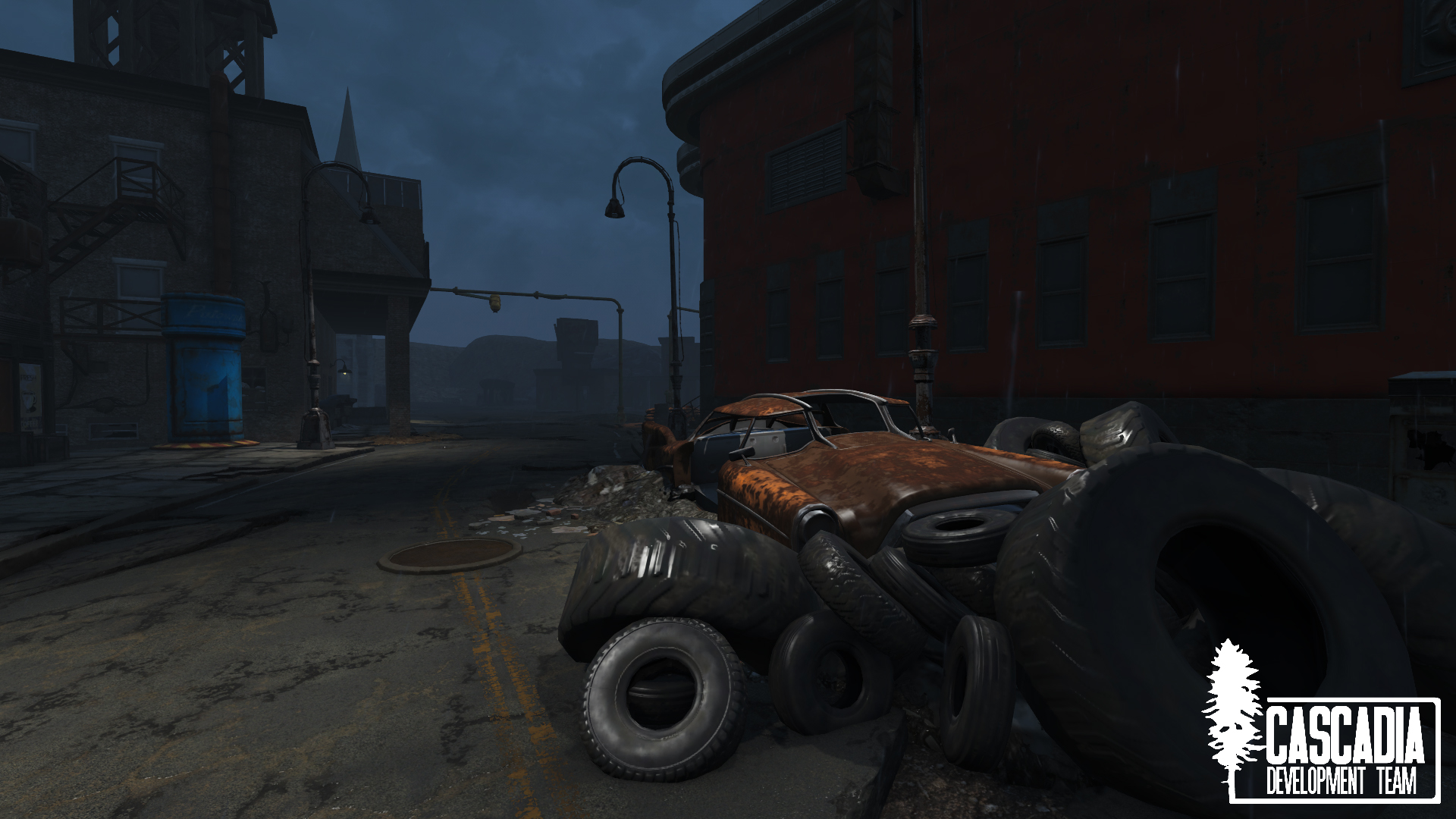 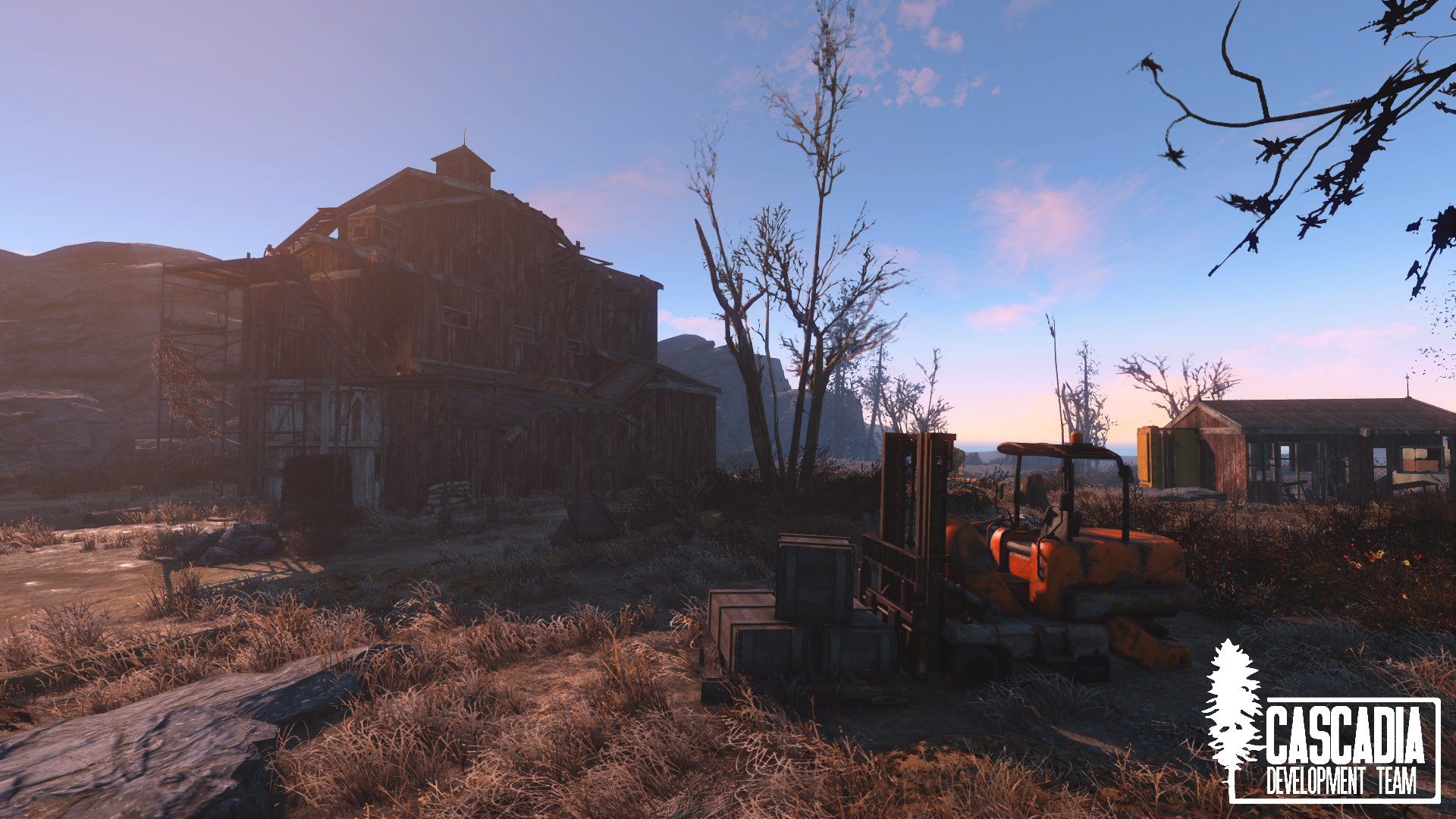 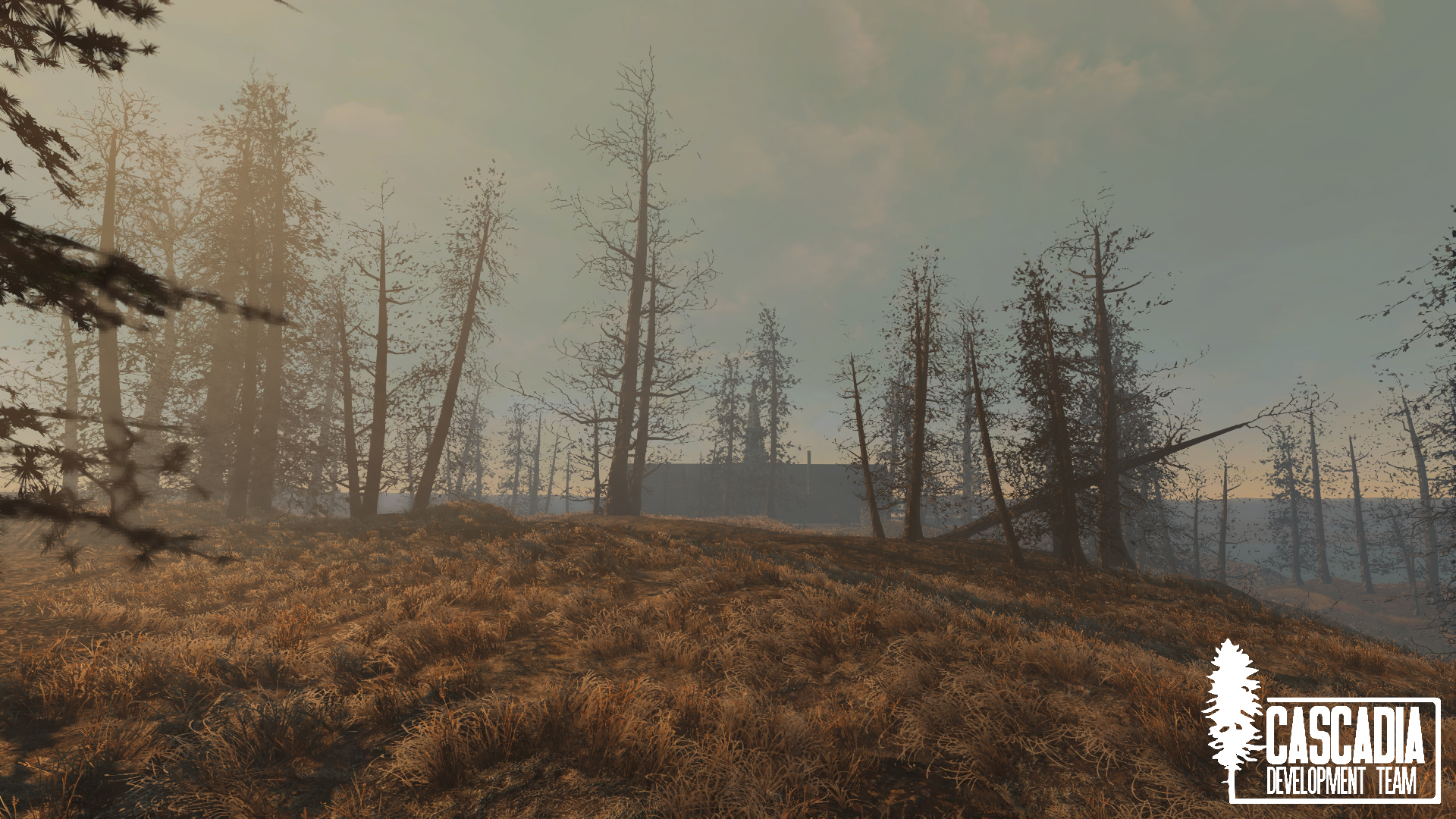 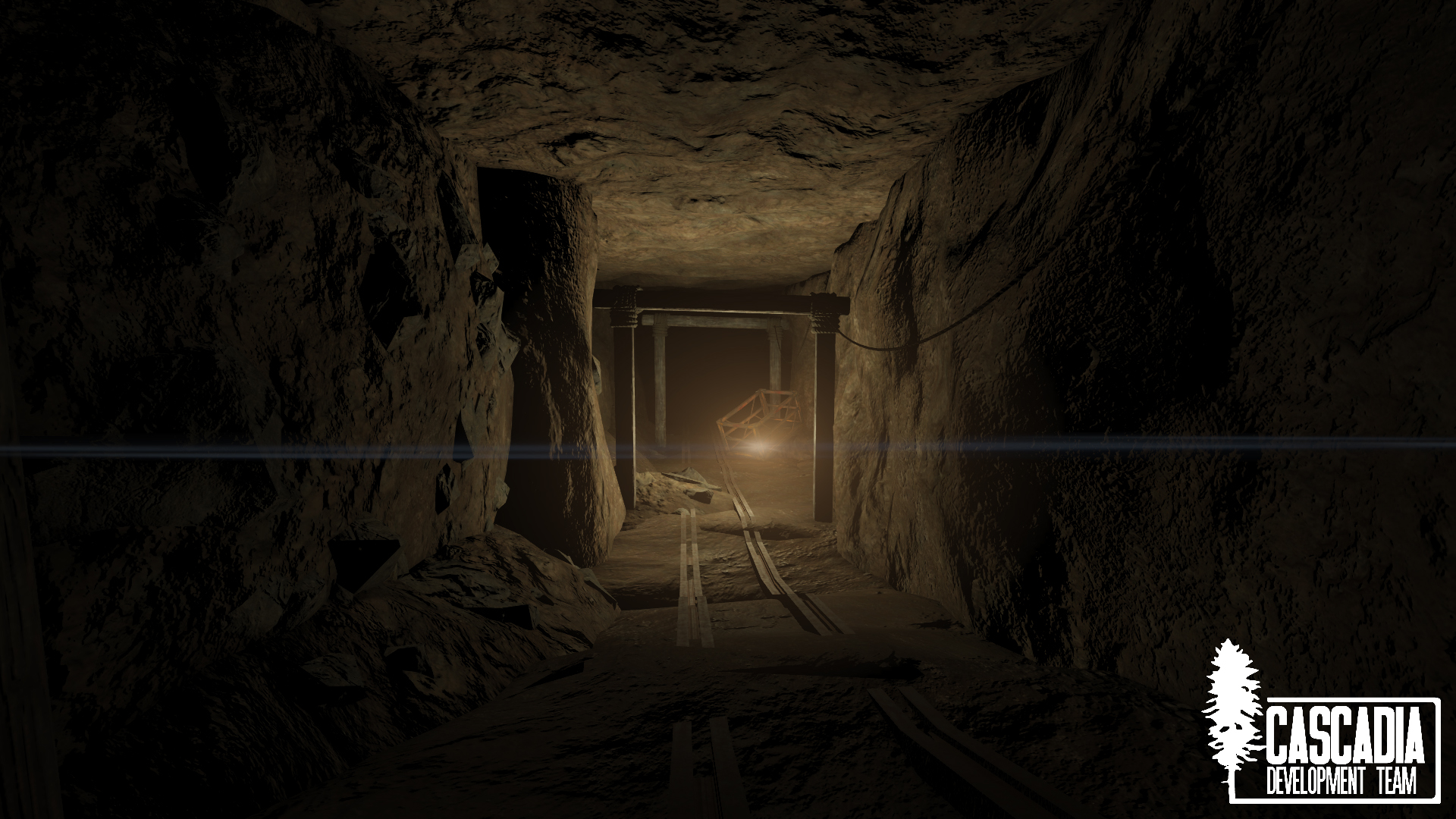 Of course, we’re always looking for new level designers to volunteer (we frequently joke that we’re building a level design army). If you have some experience with the Creation Kit we’d love to have you on board. Send an application to falloutcascadia@gmail.com and we’ll get back to you as soon as we can.

In the asset department each of our team members continue to work hard at various items to help create a more immersive Cascadia. IncludingIncluding custom buildings, static vehicles, new weapons and creatures. We’re also taking pre-existing Fallout models and putting our own twist on them such as the homemade slave collar (seen below)

We continue to work with material swaps and other integrated Bethesda resources such as framework, optimization and animation tools to begin placing finished creations into game.

If you want to help out on the asset team but don’t have modelling experience there are some options! If you have knowledge of external asset to CK integration or wish to texture UV maps, please contact us (falloutcascadia@gmail.com)! 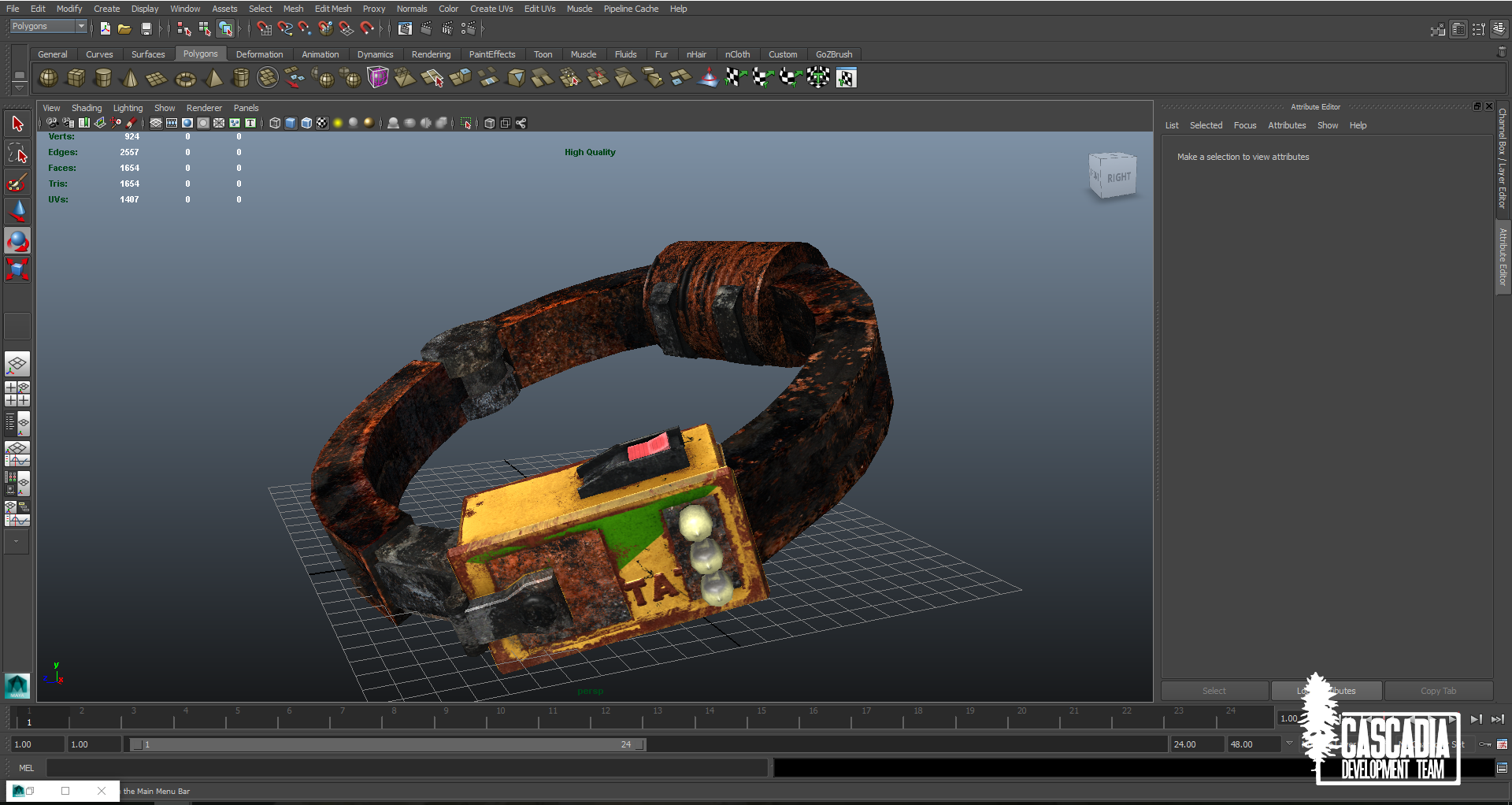 This month the Concept Art team is proud to show off a new location, which took us several weeks of work: the settlement of Sinkhole. We’re going to show you the work done by the team on the artistic direction of the settlement, from research to final illustration. 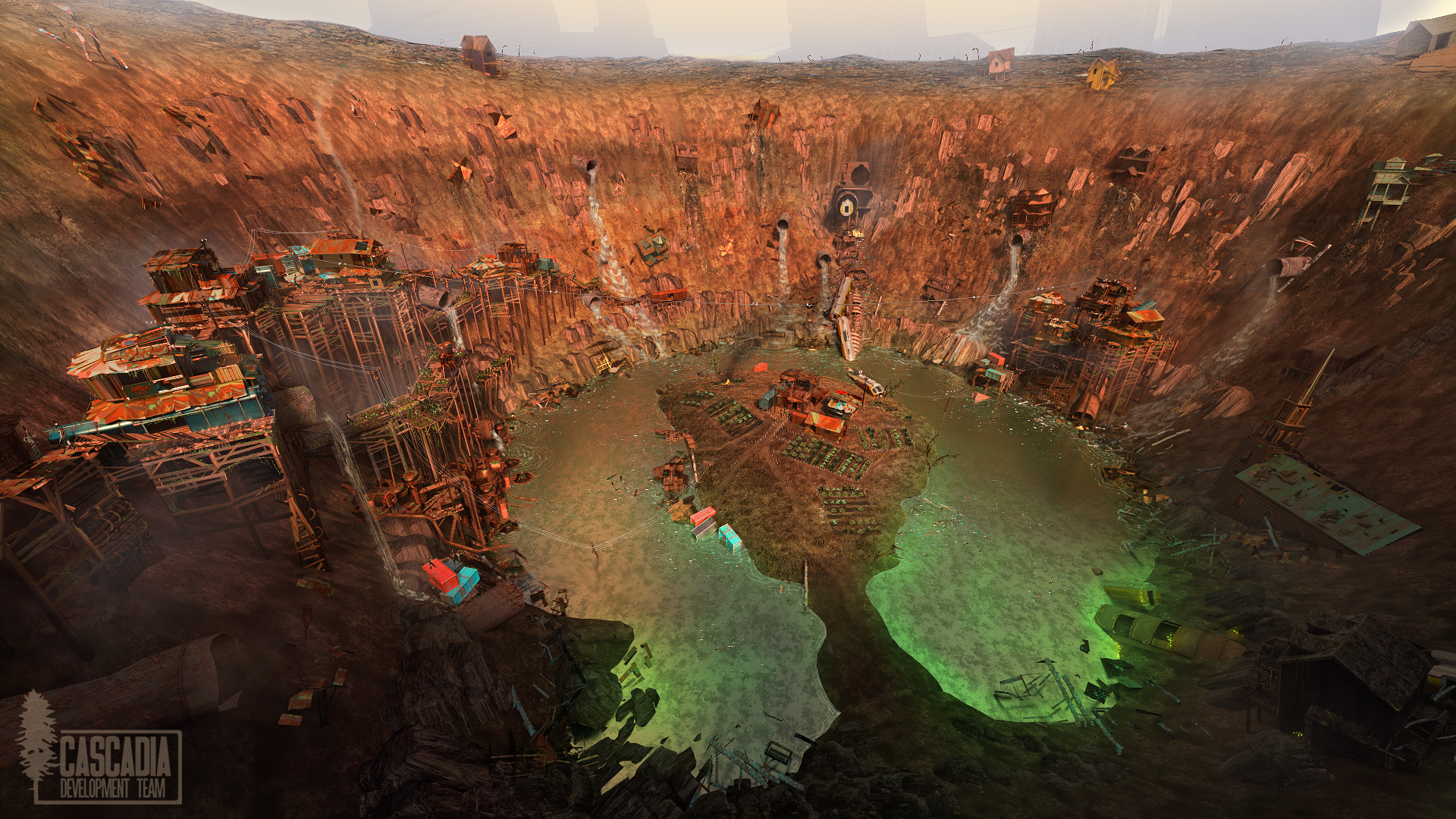 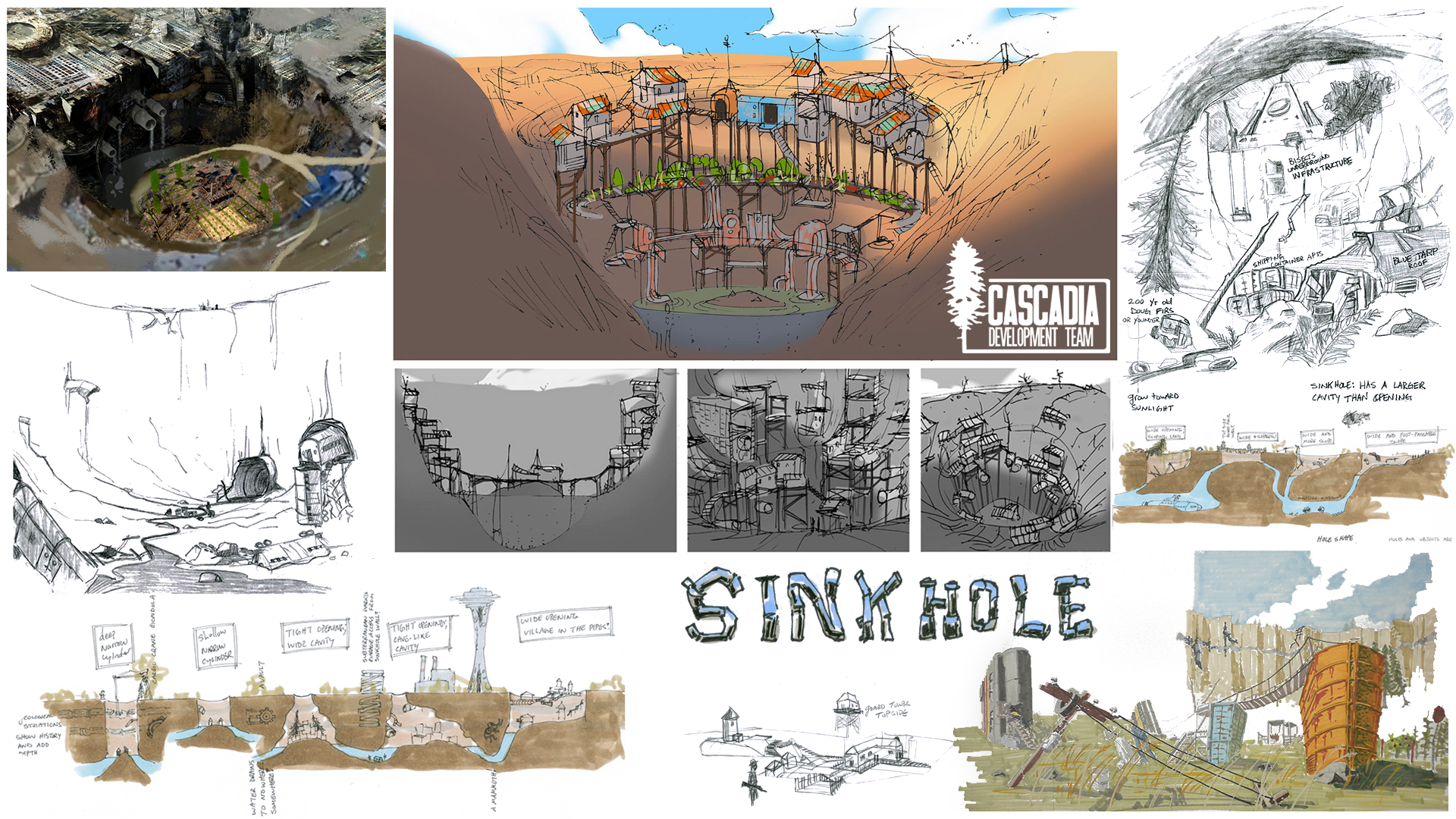 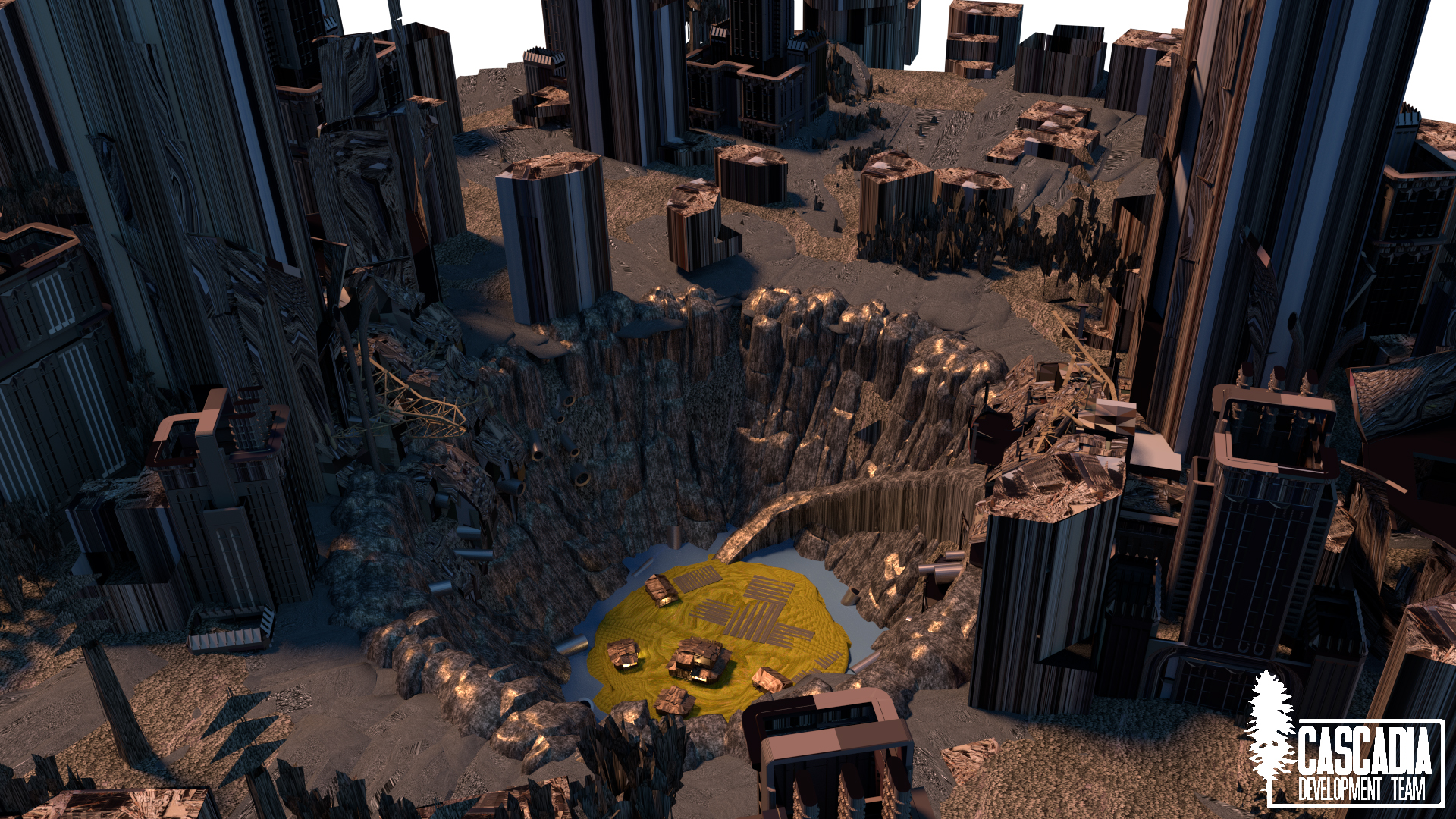 The settlement is now in the hands of the Level Design team!

Our scripting team has been hard at work to integrate the starting stages of the game such as character customization and quests We are always looking for people to join the ranks of our scripters. While the creation kit does use papyrus, if you have knowledge of creating quests dialogue trees or general CK interface familiarity please send us an email. We are always looking for more people!

Our writing team continues to push forward in creating a unique branching storyline with dynamic quests and relatable characters. The team is researching as much material as they can find to keep everything lore friendly using sources such as the Fallout Wiki, storyboards from previous Fallout games and even getting some new ideas from the Fallout Bible.

We are pleased to announce that we have brought on a web designer who is hard at work at creating a custom website for Fallout Cascadia. It will collect and organize all our current social media; we hope to get it online as soon as possible!

See you in Seattle!

Get your expansion-sized content and entirely new post-apocalyptic spaces to explore here.

Looks like a great mod, cant wait, please give us a small hint, if it targeted at this yera or next or 2020?

One thing thou, I hope with all my heart that there wont be any Minecraft (oh sorry "settlements" in your mod, that it will take more mature route like FNV and F3 instead of soulless teenage sandbox that was named for some reason "Fallout" 4.

Are you retarded, why should they remove the best feature in all of the fallout series

Oh guys we have a low IQ teenager here.
Best 🤦‍♂️🤦‍♂️ feature AHAHAHAAA ROFL 🤣
Get yourself a copy of Minecraft kid and start "building your empire"

It clearly states on the mod's website that you need all of the DLCs, it will be PC only, and there will not be a DLC-free version

Okay, I've got some questions;

-What are the major factions? NCR, Brotherhood? Will Caesar's Legion be in this?

-I see Native-Americans are in the game (nice) are they a minor faction?

-Are settlements in this game?

-What about the lore inconsistencies in Fallout 4? Are you adding on to that?

-Is the legendary system going to come back?

-Why are you using the four-based dialogue?

-What does the Space Needle (or spire) look like in the game? Is that still under development?

-And what do you mean by "Well-qualified"?