Extended Cultures is an overhaul mod for Rome Total War which started as a submod of the Extended Greek Mod. It aims to add roleplaying depth, increase challenge for the player and improve historical accuracy.

- Completely new map, adjusted accordingly to known data of ancient geography and climate
- 9 campaigns based on that map variants, with different presets and timeframes, including 275BC Imperial Ambition grand campaign, Caesar's 49BC campaign, and many provincial campaigns with minor factions. Play as Pergamon, Bosporus, Massalia, Tukhara, the Britons, Syracuse or Cyrene. Reimagine 49 BCE with more playable factions as well as Himyar, Meroe, Greko-Baktrian Kingdom, Dacia as new challengers
- 474 unit types with completely overhauled graphics and UIs compared to previous releases of Extended Cultures series (with more than 1500 skins, more than 500 models and more than 1000 UI pairs total)
- All new settlement and region development, a complex technology and economy system, with dynamical changes in building costs and inflation
- All new buildings and events UIs
- 19 playable factions: Rome, Epirus, Baktria, Armenia, Pontus, Parthia, Thrace, Numidia, Sarmatia, Ptolemaic Egypt, Seleucids, Gandhara, Tukhara, Carthage, Germans, Iberia, Gauls, Macedon and Greek Cities
- New battle formations from both Darth and Sinuhets
- Old vanilla historical battles rework with new battlefield experience
- An in-depth trait system designed for an immersive campaign experience. Ethnicity traits, supply system traits, traits that reflect attitude toward the faction leader, traits affected by the character's father, epithet traits, biographies and more!
- A vast AoR system with every region having its own local units which you can recruit by building the AoR barracks.
- A culture system: Western Civilized, Eastern Civilized and Barbarian cultures with their associated colonies. This makes the integration of regions a slower and more realistic process, sometimes it might require installing a client ruler in the region!
- A government system to help with the assimilation of new regions.
- Many new economic buildings and temples.
- A modified Mundus Magnus map stretching from Spain all the way to India (see screenshots).
- Loyalty (if enabled) for Rome, for the Greek factions and for the Gauls.

This mod was made possible thanks to a combined efforts of many modders and contributors.

The most important of them is Suppanut, who worked on this mod for almost 10 years! It is for sure the project of his life, his Magnum Opus. He tried to create his dream mod and put a great part of his kind soul to it. He is also a very polite, wise and calm guy, his charisma kept us together during all these months and who is for sure the Master Yoda of our Rome - Total War Modding Community.

The next big part of the mod was made by me (Lanjane), including lots of textures, models and UIs, this took me several months to complete and this is for sure the biggest project I was ever involved in my life. I will never forget all these countless sleepless nights, and hundreds of hours spent in Photoshop and 3dsMax.

The main concept of the mod was set by Zarax and Suppanut, with the help of various people: GeoHitmanGR, Anakarsis, BHL_20 and many others.

Provincial Campaigns would not be possible without help of Suppanut's friend and modder BHL_20, who spent a lot of time polishing the campaigns balance, adjusting factional powers and initial positions. He was also our PR manager and talented author of preview articles and pre-release article showing XC features. Kudos to him!

Beautiful environment and vegetation of Extended Cultures was made by Robbe Aerts, who also created stunning vegetation and climate for Ahowl's Vanilla Enchancement and Rome: Total Realism 8 mods, and his personal Vegetation mod.

We are very grateful to Ahowl11, who provided a Git server for the main piece of work during the last year, helped with management and advises.

Also great thanks to our historian researchers, Mausolos of Caria, a professional historian who stays with our community and keeps us historical since early RTR8 development days, and my friend crazyroman, who likes Greko-Baktrian world very much. The special love and care to Baktria, Iphicratean warfare and elite hellenistic units of crazyroman is the thing which was one of the most exciting and notable moments during development of units.

Also big thanks to many other contributors and creators of original content which was used as a raw resource for XC units overhaul. There are too many of them to mention them all here, you'll find them in the mod's ReadMe file.

Hi everyone! Extended Cultures 5 in now finally ready and will be released today. I'm just going to quickly give you an idea of what you can expect if you download the mod. I know there wasn't any news regarding the mod for several months, this is because there was originally a plan to release the mod in late summer/early autumn but XC5's current unit artist, Lanjane, felt there was still a lot of room for improvement when it came to graphics. Indeed, the mod has been given a facelift with the number of new textures in this iteration rising to over 1100, the number of new models rising to over 500 and almost every unit receiving new UI. In addition to that, the time since the summer has seen XC5 gain new animations, a new menu background, new loading screens, a stunning new soundtrack and some changes to vegetation. I also want to try to explain Suppanut's new building system, which has been the defining feature of XC5 for quite a while, but I never talked about it in the summer previews.

First of all, here's a taste of the new UI:

New units have been added for various roles throughout the mod, but there are two unit roles you will now find to be present for most factions: a garrison unit and an officer unit. The officer units are a recruitable elite cavalry unit that comes with an accompanying characterer.

Rome received brand new units for both of these roles, the Rorarii and the First Class Equites.

Iberia's old garrison unit is still around but has been made look less vanilla-ish.

There has been a lot of love given to the elephants of XC, they are more realistic now and each unit type has unique decorations.

You will also find a few unusual units in XC5:

Units of Druids with Berserker bodyguard for the barbarian factions.

The Incendiary Stone Throwers of Pontus.

Now, to say a few words regarding the building system as it can be very intimidating at first glance. XC5's building system takes its inspiration from MTW (the first one!). Buildings operate with a complicated web of bonuses. Economic bonuses and recruitment is highly dependent on the other buildings and the resources present in a region. Certain maybe unusual measures had to be taken in order to provide adequate information to players in-game. 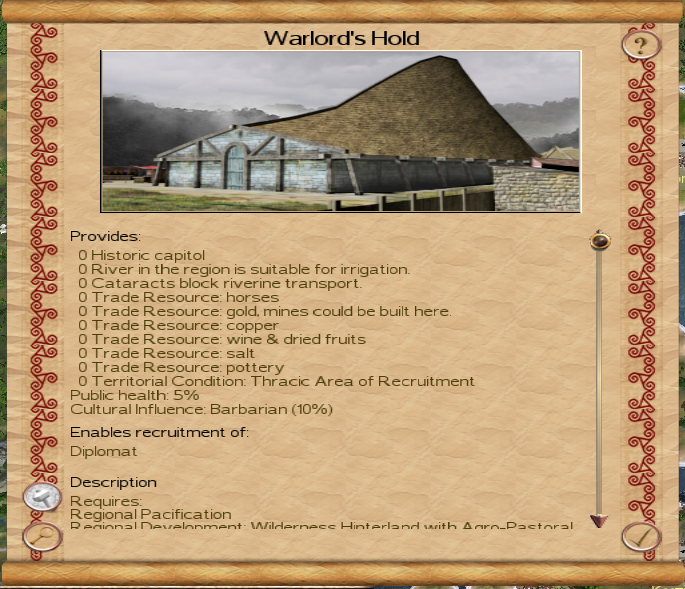 See the screenshot of the Warrior's Hold above, this is one of Thrace's starting governor's buildings. Governor's residences in XC5 will display the hidden resources and trade resources present in the region to you. The public health bonus and cultural influence bonus in the scroll are just regular building bonuses, but all the other lines in the "provides" section are giving you information regarding the resources (don't mind the zeros on the side, they are simply being used as bullet points and do not indicate quantity). 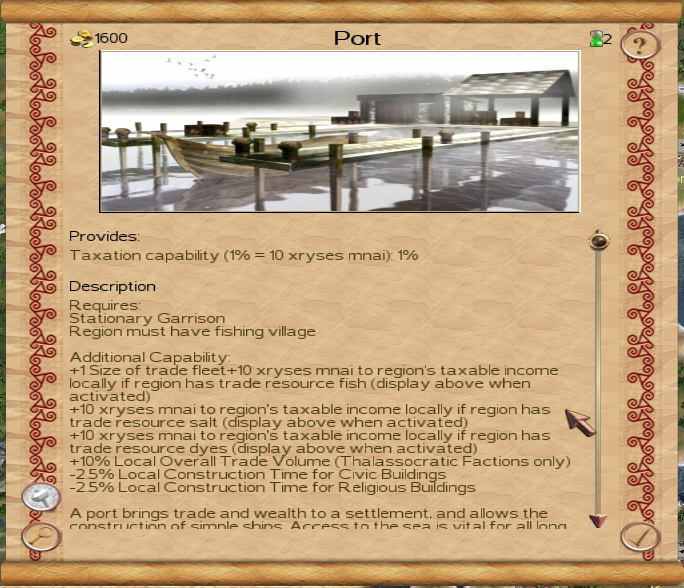 Now see the screenshot of the Port from the same settlement above. Its "provides" section only has one line but the description lists 6 possible bonuses. The first 3 of those bonuses are resource-dependent tax bonuses. The region has salt, but no fish or dyes (as seen from the Warrior's Hold). Therefore only one of those tax bonuses is active hence why there is only one tax bonus displayed in the "provides". The trade volume bonus is inactive as Thrace is not a thassalocratic faction.

Finally, the last 2 bonuses have no condition so they are always active. Unfortunately, the confusing part is that they are not displayed in the "provides" section. It is hardcoded that contruction time bonuses they do not display the same way as other bonuses, so you will only know about them by reading the description. However, they are very important for XC5's gameplay as some buildings in the mod have very long contruction times and you should only attempt to build them once you have stacked enough of these contruction time bonuses to make it practical.

This building system will probably take a campaign or two to grasp, but XC5 is still quite playable even if you don't utilize this system to its fullest. It's possible to get by with most factions simply through recruiting units and winning battles. However, once you do understand it, it will hopefully bring much more depth to the campaign experience.

That's all from me! Happy holidays and have fun with the mod!

Some Videos of this Mod

Some videos to give you a better idea about this mod. These youtubers are not affiliated with the XC team.

Installer for those who don't register RTW CD version into window registry (so install option do not appear for them in normal version because it fails...

The Redfox Extras 1.2 patch. This is an optional patch, made initially for XGM, this is a version that has been adapted for XC 4. It adds new music, new...

How do I solve the lagging issue? My computer is high end but the game still lags on me.

Is it only available in English? Yes, how could I translate the texts into Spanish, I want to play it but my English is very bad!

您好modding皇上;)
thx for the mod and for ur AMAZING work with the battle formations! that alone deserves an award!
quick question: did u also change the CAI?

Many factions kn game have post-reform units, but they trigger tha reforms themselves? Does marian reform need roman faction to build huge city in Italy? can other factions do it?