In 1935 E.C., the continent of Europa is dominated by two superpowers: The Autocratic East European Imperial Alliance in the east and a commonwealth of loosely allied democracies known as the Atlantic Federation in the west. The economies of both powers depend on a precious multipurpose mineral called Ragnite. Its growing scarcity results in the Empire declaring war on the Federation, sparking the Second Europan War. The Empire uses its military superiority to quickly put the Federation on the defensive. Emboldened by their progress and momentum, the Empire decides to invade the neutral Principality of Gallia to seize its rich Ragnite deposits. 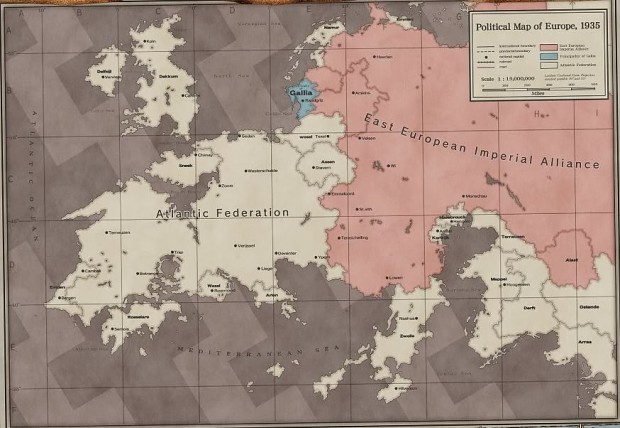 European Chronicles is a Total conversion for C&C Generals Zero Hour based off Valkyria Chronicles. Unleash your forces on the fictional continent of Europa in the endless war for Resources and Glory. Immerse yourself in the mod based on your favorite turn-based strategy game. Defend the Mountains of Gallia or March your army for the Glory of The Emperor. Overthrown the false Archduchess or Push Back the Imperial Invaders. Everything is in your favor, General.

Most notably, for our initial release, the mod adds two completely new factions, the fast and agile Principality of Gallia and the tank-heavy East European Imperial Alliance. In addition, the Gallian Revolutionary Army and the Atlantic Federation would be added in the forthcoming releases. 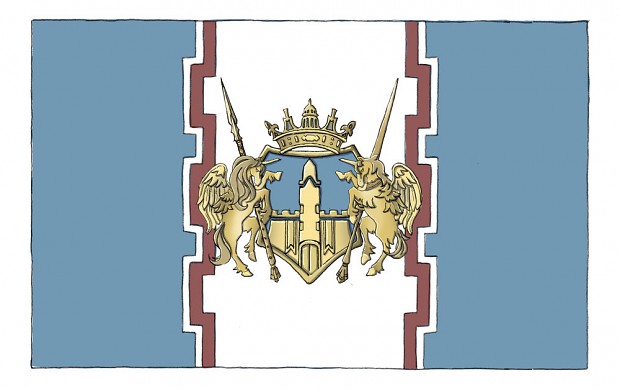 Full of nature and rich in Ragnite Ore, the Principality of Gallia is a small independent nation which borders the Empire to the east and the Federation on its western edge. Gallia has a modestly small army compared to the other European powers, on account of its small population. As a result, The Gallian military focuses entirely on weapons and tactics designed for defensive warfare. 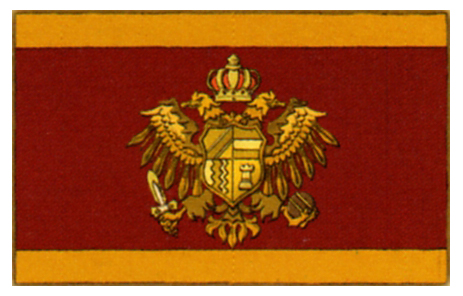 A conglomerate of nations united under the rule of the East European Emperor commonly referred to as "The Empire." The Industrial Revolution that occurred when ragnite was discovered as a useful energy source saw the nations of eastern Europe, pioneers in machine technology, rise to power. Already tightly bound by a network of marriages amongst their royalty, these nations now joined hands in a formal international alliance. The Empire places a heavy emphasis on armor and large caliber weapons, with many of its tanks greatly out-massing their Federation and Gallian counterparts. 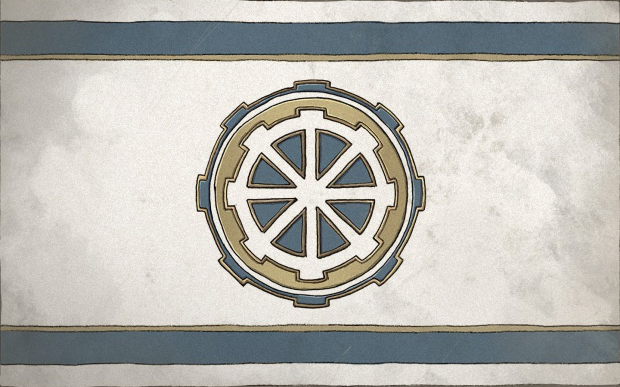 Popular uprisings spurred on by the late 18th Century Industrial Revolution gave birth to a number of new democratic republics. The nascent Empire, formed to the east, represented a common threat, motivating a mutual defense agreement among these infant republics. Though an elected Head Councillor acts as the Federation's chief executive, unanimous agreements are rare among the constituent republics, meaning it often takes months to enact measures. Though a series of secret alliances and gains won by extortion and blackmail put the Federation ahead of the Empire in terms of national power, they have yet to defeat them on the field of war.

Greetings, Generals! It's been 2 weeks since the mod development started again, we have some news for you, as we all going through some of our unit profiles. These 2 weeks I've been focused on finishing the Infantry roster of The Gallians. As we all know, they are the backbone of the Gallian Military, when the Empire have their wave of Tanks, we got the Infantry! 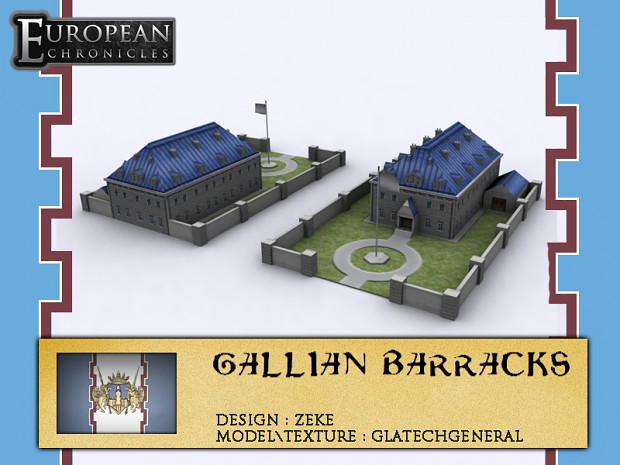 Barracks are usually a group of long buildings built to house military personnel. The main object of barracks is to separate soldiers from the civilian population and reinforce discipline, training, and esprit de corps. They have been called "discipline factories for soldiers".Like industrial factories, some are considered to be shoddy or dull buildings. 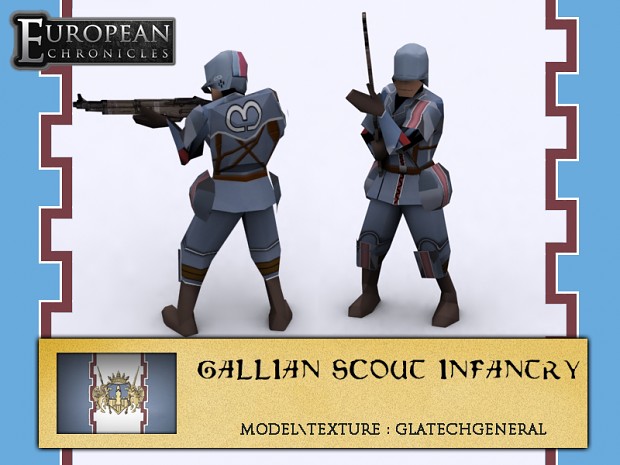 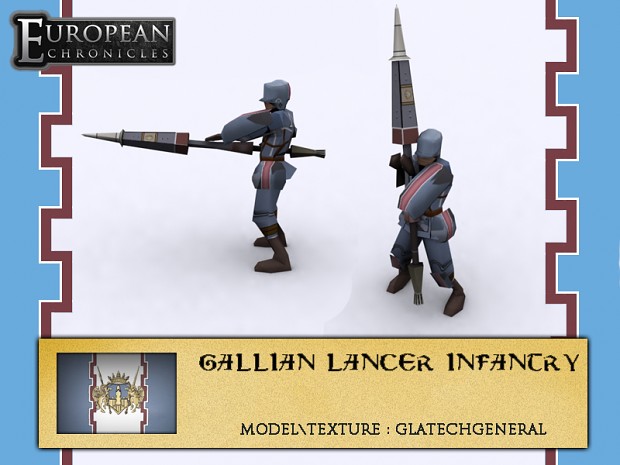 Heavily armored anti-tank units. The Empire's tanks are the evolved forms of their armored cavalry, and similarly, the Gallian lancers are the evolved forms of their heavily armored infantry. As the firepower of the lancer's and tank's weapon increased, the lancers started scattering to put space between facing tanks instead of maintaining a fight formation. 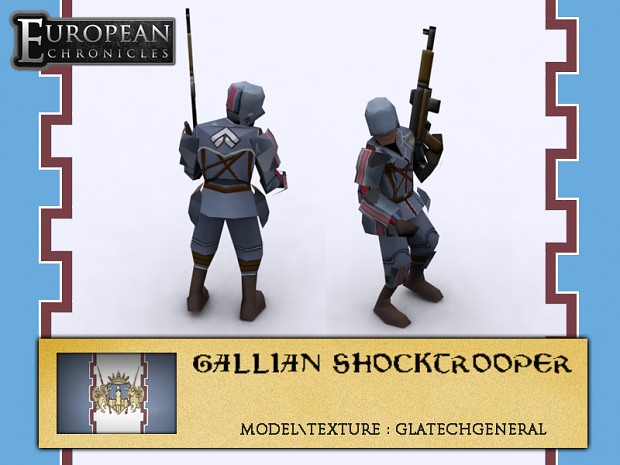 These powerful soldiers are the ones who lead the charge into enemy lines after scout returns with their reports. In order to increase their chances of surviving the enemy's focused fire, the shocktroopers have a little more armor than the scouts. Their armor is not too heavy, however, as they must avoid cannon fire rather than withstand it. Shocktroopers are armed with flamethrowers to make them more effective when overtaking enemy encampments. 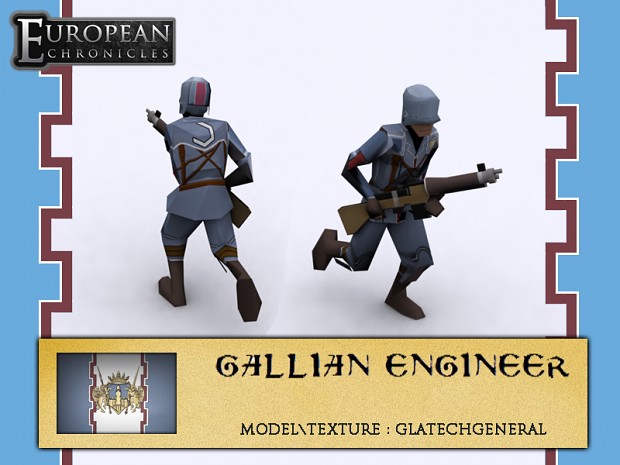 Engineers offer all sorts of important support up on the frontlines, such as offering first aid, performing quick fixes on tanks, clearing mines, and constructing makeshift bunkers. They are sort of a mix between the modern-day engineers and medic. They really are only meant to perform support duties, and their armor is comparable to that of the scout, which makes them ineffective in frontal assaults. 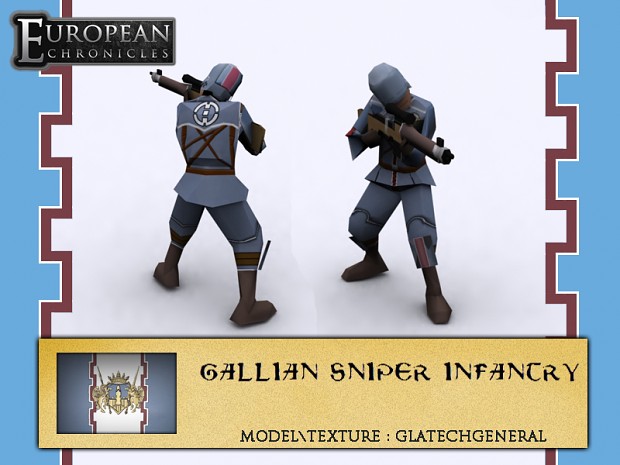 Specializing in extremely ranged combat, the snipers have even less armor than the scouts. Their cumbersome sniper rifles also make them the least-mobile units in the game, but their ability to target an enemy from a distance without fear of immediate retaliation makes them powerful allies indeed.

Actually, I'm updating the Infantry models to be more similar to the source game, like fixing the Helmet and adding the armor on arms and hips. Even changing the face texture.

So, Come another question, is there any way I'm gonna put the Valkyria Chronicles characters like Alicia, Selvaria, or Alisse?

Yes, I'm gonna do that, but not in the near future I suppose. We still have a long way before that, like finishing the core units and buildings of the factions and possibly, the Super Units that are in the Source Game.

By the way, I'm also made a Gallian Defense Structure while at it. 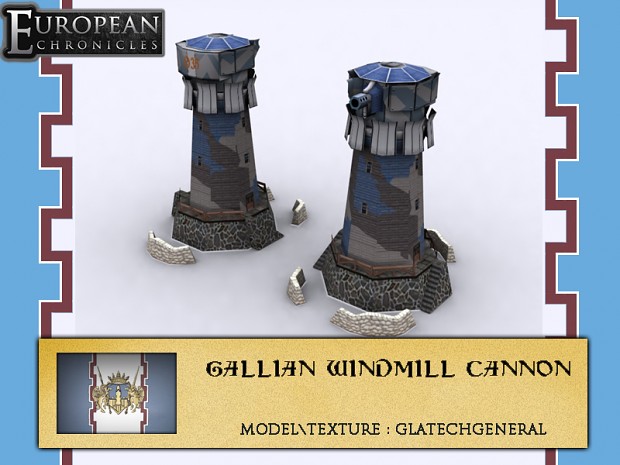 One of the many experimental methods used by the Gallian Armed Forces as a defensive strategy for the nation. Many Windmills scattered around Gallia would be armed with a short-barreled cannon built into the sail axis. This idea was apparently rejected due to the fact that it did not effective in the time of invasion (as happened in EW2).

Eventually, some of these experimental windmills survived, used by the militias and seen action even though it was not enough to repel the Imperial Invasion. During peacetime, it would function as a normal windmill, but the sails could easily be removed when enemies invaded so that it could be used as a turret. A great weapon fits in quite well with the concept that Gallia is a strictly defensive country.

The next 2 weeks would be the development of Gallian Tanks and many buildings such as Upgrade center and Supply lines. 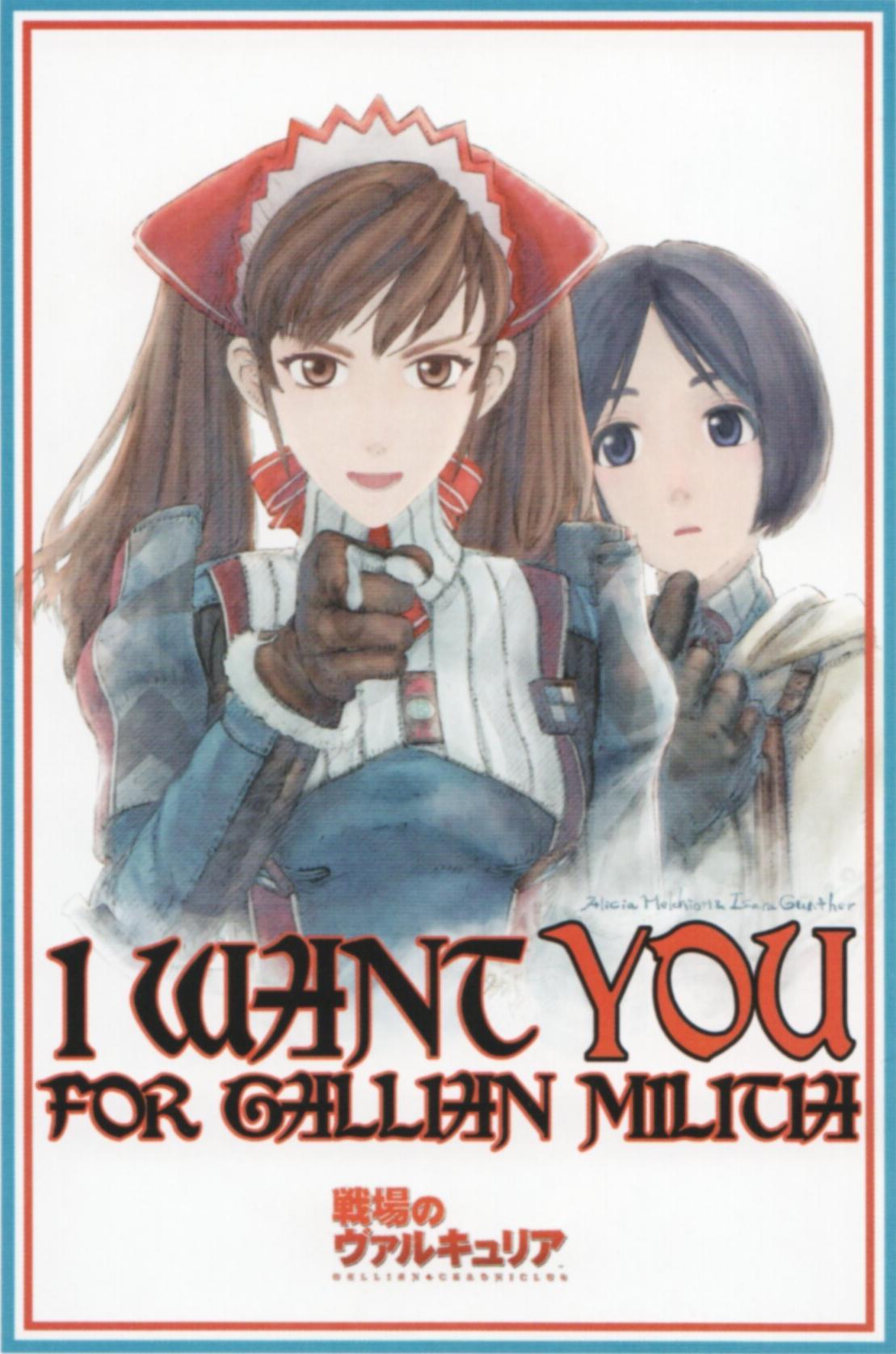 Greetings, Generals! By accelerating the mod's progress with periodic updates, I will also notify you of the roadmap for the Gallia faction and its possibilities...

The Middle of 2020 marked as we gonna re-ignite the spark that is European Chronicles Mod. With the new resolution in this year, We finally ready to bring...

Welcome to the fictional continent of Europa, a land full of myths and legends, mineral resources called 'Ragnite', and where blood and fire scattered...

Looks pretty cool.
Guessing Empire and Federation will also be around at some point. With VC4 covering Squad E, there is a basis for Federation designs now.

Playing off your convo with Oriko for a second... not sure who the Fed hero would be.
Alicia is prime candidate for Gallia, especially since she's basically the face of VC.
Selvaria is prime candidate for the Empire, although there is also characters like General Jaeger and Cymaria.
Fed... not really sure. Maybe Claude Wallace or another member of Squad E.

I'm thinking about Kei Schulen as Sniper Hero like ZH Jarmen Kell, but I'm also considering Riley Miller too. It's hard to say at this point.

yes, but I'm saving the one exist in 2 for the other "Gallian" Faction

Interesting Mod, because i love Anime

I guess that you have everything covered in terms of vehicles, right?

Yes, I have...just wait for it Okay

A little question：You will make the Atlantic Federation from Valkyria Chronicles 4`s add in your mod?

Yes, I will eventually, I want more variety to this mod and after making Atlantic Federation later, I will add the Gallian Revolutionary Army from Valkyria Chronicles 2.

I wonder how would different between the Federation and the Gallian considering Imperial already take the brute force faction with heavy tank, Gallian subversive with their light tank. Would the Faderation doctrine become something in between?

As for now, I think the Federation would be Jack of All Trades, by balancing their force. But, Hey! We knew they have Artillery infantries in VC4, so it might be focused on that.

Btw will you have hero unit for each side like Alicia or Selvaria? Would love to see them in action.

I wish best luck for your mod btw, just ignore those stupid anti-weeb comments that will come by. It's annoying but don't let it affect your progress.

I will eventually, but not in the near future I suppose. I must complete the foundation first, like buildings, units of Gallian and the Imperials, only then I would have the time to think about Hero units and I believe I need to learn how to create better Infantry model next time.

Thanks and no problem, I kinda used to it by now.

Nice to hear that. But yeah sometime people can't stop throwing brainless insult at other especially against anime but it's unavoidable anyway.