Don`t play with HELL - Black Edition (official abbreviation: DPWH-BE) is a single-player story-based FPS game in the DOOM universe of ID Software.
Creating DPWH-BE, the author wanted to demonstrate to the world DOOM community a new quality of gameplay and visuals that became possible due to the latest updates of GZDoom 3+. 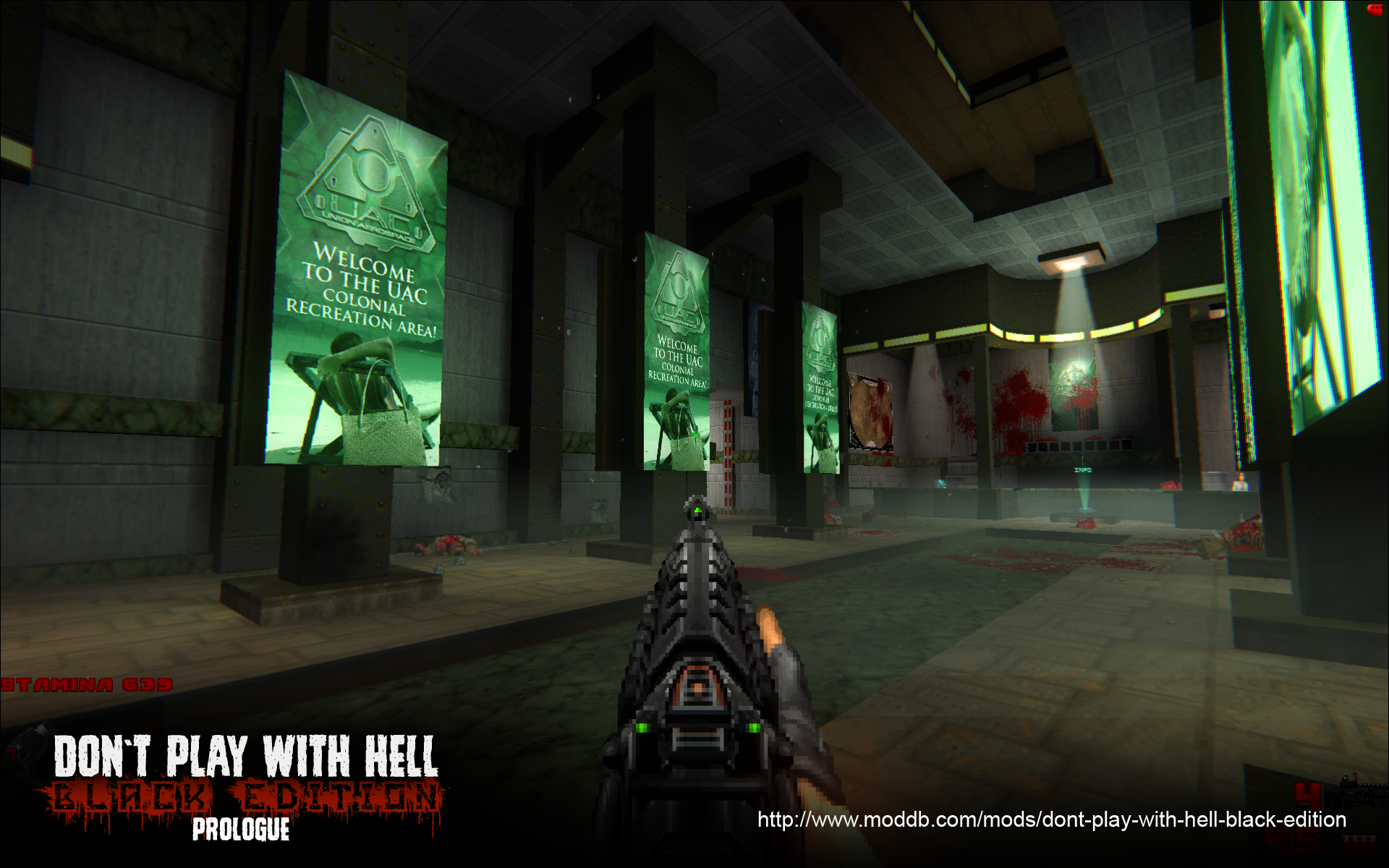 Why is it for?

Unfortunately the author, most of the potential of the GZDoom engine is currently not used by most of the dumkrafters.
The amazing possibilities of artistic realization in combination with the truly phenomenal speed of development in this environment have generated a huge number of very diverse gameplay mods of different quality levels.
On the other hand, it is considered a good idea to make "classic" mapsets that have maximum compatibility with this variety of gameplay mods.
However, for reasons of compatibility with other ports, the authors of popular mapsets consciously bypass the modern capabilities of GZDoom.
Thus, the fans of the greatest game of all time, made great efforts and talnat, which made the DOOM so diverse... unrecognizable.
The author of DPWH-BE wants to correct this situation by presenting this project to you.

The author perfectly understands that the worked out plot was not the basis of the games of the classic DOOM series. However, modern means of implementation make it possible to immerse the player not in an abstract hostile world, but in an ominous story, when what is happening becomes only scarier - if you follow the plot.
On the other hand the modern player accustomed to certain game mechanics and slow gameplay of the games of the past have not excites him. Therefore, the project uses the game mechanics of Brutal Doom: Black Edition.
The author deliberately chose this gameplay mod. Why - read on.

DPWH-BE created for GZDoom version 3.0 or later. Don't try to run it on earlier versions of GZDoom or even more so on other ports. Even if you get it – you will get a drastically spoiled the picture, which will mislead you.
Also – there will be damaged important gameplay elements that will make the process of passing impossible.
DPWH-BE comes with the latest stable and tested version of GZDoom and specially selected graphics settings.
If you run the game at "Balanced" settings by default- you will receive: dynamic lighting and shadowing real-time, chromatic aberration and tone correction.
These modern technologies that are now available in GZDoom more than just improve the feeling of the picture under a moderate load on the system.
"Quality" settings will add Ambient Acclusion and reflections on the surfaces, but greatly reduce the FPS.
The author should note that the project design was developed based on these technologies, and lowering the quality to "Performance" considers highly undesirable.
Apart from the above, the project uses hardware shaders, the Unreal-Style skyboxes, a room-over-room system and other pleasant features of modern GZDoom, which enable to create a more realistic environment for you.

Brutal Doom: Black Edition is integrated into the project and is its integral part.
Do not attempt to start DPWH-BE with other mods. This will inevitably lead to conflicts, bugs, and make the passage meaningles.
If you are a fan of another gameplay mod - you can work on decompiling the code, replacing objects and extracting BDBE materials from the project. You can even create a mod for DPWH-BE with support for any mods of your choice. The author has nothing against it.
The main thing - play through DPWH-BE in the original first - and only after that do the evaluation of the project and the decision on whether it is worth changing it.
The author chose BDBE, and not the "original" creation of the respected Sergeant Mark IV as well as other mods for the following reasons:
- all original monsters retained an authentic appearance
- The original monsters received new abilities that made them more dangerous and interesting.
- all the weapons has a balance to the updated abilities of monsters
- the dynamics of the gameplay is very detailed, and has a unique balance between "difficult-interesting" and "impossible to play." The gameplay stimulates the active movement, but at the same time makes the "Rush gameplay" the most inefficient way of playing.
In other words - the gameplay remained recognizable, but at the same time in an interesting way.

If you miss the real DOOM, but want the best picture, interesting plot and a sea of blood - YOU ARE HERE!

The author of the project is Bifurcator.

Without you guys, that would be impossible.

Improve your karma!
Support the developer!

Gentlemen!
Update 1.3 was released, which fixed all the serious bugs that were discovered by our respected players in the last 2 days.
We are actively working on updates and are happy with all your comments and suggestions.

Fixlist:
Fixed all known problems with the operation of airlocks.
Fixed some drawbacks in textures.
Fixed pinkipush neckfracture
Many thanks to the community for their active participation!

The author consciously does not want at this stage to disclose all the subtleties of the plot. But he considers it necessary to clarify some of the fundamental...

Fixlist: Fixed all known problems with the operation of airlocks. Fixed some drawbacks in textures. Fixed pinkipush neckfracture Many thanks to the community...

Is there a version of this mod that can be played without BD: Black Edition? I don't really like Black Edition.

There is the link to the stand alone maps Moddb.com

this mod don't work with the latest version of gzdoom

you'll need to use an older version that does work.

Is this mod dead? It would be very disappointing for such a good mod to be forgotten

how many levels does this have

Hi Guys, i have a problem when i am running this black edition.

I have just sound with a black window. The cursor is also running well in the black window, but no game screen just the sound.

Somebody please help me ! I am a big fan of doom.

Do you still have this problem? Maybe its due to the wrong version of doom.. Which one are you using? Gz? Zandronum? Z?

I think that the current complaints about the mod are somewhat uncalled-for. I can understand that people don't like Black Edition but to give a straight 1/10 for that one reason without considering what other things it has to offer is just childish. Anyway, let's get to the review... It's quite awesome to see the quality that community-driven work can have, if there is something that I found outstanding in this mod is the level design, there are sections which could be described as "Doom 3-ish…