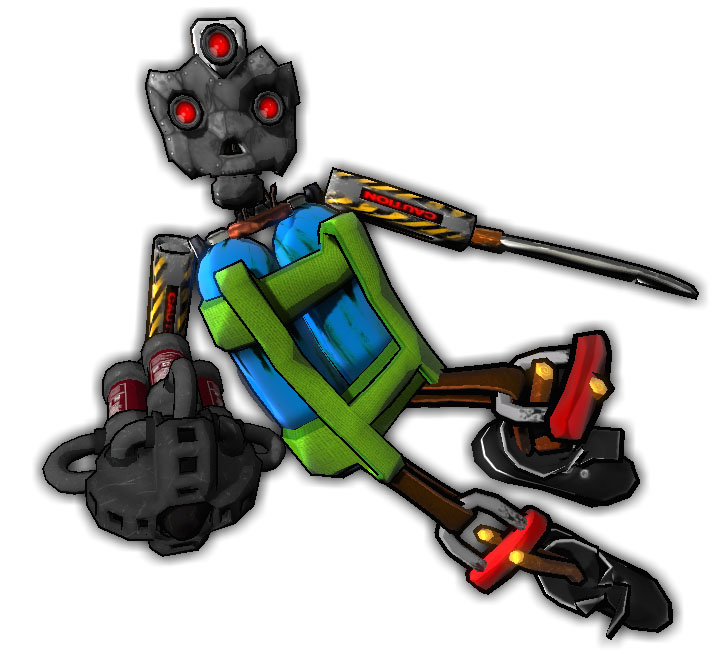 Doll Carnage is a Total Conversion of Unreal Tournament 3 for 4 Phase of MSFU.
The game originally would be a first/third person shooter, but for accelerate development now is only a TPS with fixed camera.
Style game is cartoonish, like show last renderings of arms and weapons, it's all in pure Cel-Shading with very simple textures for time reasons and especially for an artistic choice similar to Team Fortress 2.

People that observes DC since the birth, maybe didn't jet understand anything about this from images, so I can give to you a light "smattering" about the plot.

Someone wrote: Thinking to be on an abandoned Earth, robots fight for take possession of last spare parts left.

What distinguishes DC is the possibility to personalize own character "stealing" spare parts from the other players: in arenas there will not be any kind of med pack or power up but only the players and ammunitions.
Besides spare parts don't are useful only for health points but especially for unique characteristics, like permanent invisibility, strong health, wall walking, etc.

Like you understood, the game is based on spare parts; these are subdivided in few kinds:

· Right Arm: this takes a weapon and is subjected to parameters like accuracy and reloading speed.
· Left Arm: this is useful for "snatch" a limb from enemy or defend from sword's attacks
· Legs: these permit movement and are subjected to parameters like speed and agility.
· Body: really this isn't a spare part because if you lose this you die, but this give to character special characteristics.
· Head: the loss of this brings to death, but gives a multiplier of numerical qualities (heath).
· Hat: this is only a decoration

For render all more realistic the health loss will depend from damaged part. I created these behaviors until now:

While initially the project was focused on a very large number of weapons, now the weapons are essentially 3, jet posted "closed" in 3 previous rendering, and 6 hand-to-hand limbs.
Weapons can be used like energetic swords, while h2h limbs are useful for shield a hit or for "steal" a spare part.

1. Hanabi (in picture Flamethrower) is a modified flamethrower; while first fire is an incendiary foam, alternative fire is flame. Both methods can be used at the same time. In sword method this creates a fire wall.

2. TeslaRifle (remained the same) is my favorite combination, between a sniper rifle and a Metroid weapon. First fire shots a lethal ray. In sword method this sends off enemies with a shock wave.

3. RotoBlade (in picture simply called Catapult) is a combination of a grenade-launcher and a mine-launcher. In sword method this "grinds" the enemy.

Here are the Phase 4 finalists for the Best non-FPS Mod, Best FPS Mod, Best Machinima, Best Vehicle Set, Best Level Set, Educational,Best Use of Physics, Best Art and Best Graphics in Maps category's in the $1 Million Intel Make Something Unreal Contest. All finalists in this category are eligible to enter the Grand Finals. This competition rewards top mods created for Unreal Tournament 3 with cash and hardware prizes in four preliminary phases and a grand final. Visit Makesomethingunreal.com for full details.

Best Use of Physics Phase 4 Finalists:

Entirely released the offline version of the game in which you will be able to fight into a map against other 3 bots.

I concluded to texture all "spare parts". I posted all preview made with Unreal Engine...Have fun!^^

Simple Only-Offline version of Doll Carnage for 4 Phase of MSUC. Guide to installation into 4 September News.

Looks real interesting, but i think the shaders on the characters can get some more work onto them, since they all look like real boring plastic as is.

I was just taking this for a spin. The weapons are very nice and it looks really good, but I just want to know if the salvaging system has been implemented yet. I run to enemies only seem to drop their weapons, no health, no powerups. It also seems like the rotoBlade's melee attack doesn't deal damage.

The ingame customization isn't implemented yet. About Rotoblade melee attack, the problem is into a forceRagdoll() function that I don't modify.
This is a very primitive version of the game, infact there aren't powerups (there are ammo!).

I can't play for some reason. The splash screens works, and so does the menu/loding screens, but after the loading screen it says "precaching". I have waited for about an hour and it never loaded. Help would be greatly appreciated. I would love to try out this good looking mod. e-mail me at johnpinky7@yahoo.com
Thanks

OK scratch my old post, i have a new problem. The mod models and junk items do not load. It uses the default UT3 instead. This could be a problem....

Did you install UT3 patch 2.1?
Please send me a image of the problem with a private message

-gazes at video and checks list of improvements after first release- head looks too big for one
two, it looks like you could dual weild the guns
three, overall body looks kinda uneven (then again its made of junk so f-it)
four, awsomeness in the video
and five, when do we get to see teh junkies repair themselves...

also for a six: how didja get sheild? that's a first IMO.

I know that arms are in dual welding pose but I can't find a solution for this...If you know what I can repair this, teach me.
For the awesomeness I can't do anything XD!, I think you talk about the song in the video. For the 6th question, I want to use an escamotage for spare parts with power-up code and 2nd firing mode of Impact Hammer.

Most probably localized damages and in-game customization will be released in another time...Now the goal is MSUC

for the arms: i think you have to make it act like any normal UT3 weapon (like the sniper rifle pose). justa guess the way to make it weild with one hand is pretty much A: expand the gun or B: missing code? or some animation not running properly im just guessing