Bailter Ray is a 2.5D "side scrolling" platform, adventure shooter. Set in a alternate reality where science fiction tin toys exist as living entities. The player controls a tin spaceman Captain Phoenix Valentine, an Astro-Explorer who has crashed landed onto an unknown alien planet. In order to get home the captain needs to retrieve his space ship's power supply (a wind up key) and locate his ship.

The game is a platforming playground of puzzles, enemy robots and alien plants that shoot goo and fire. In order to survive the surreal alien landscape, the player must make effective use of his suit's jumping and dodging abilities. 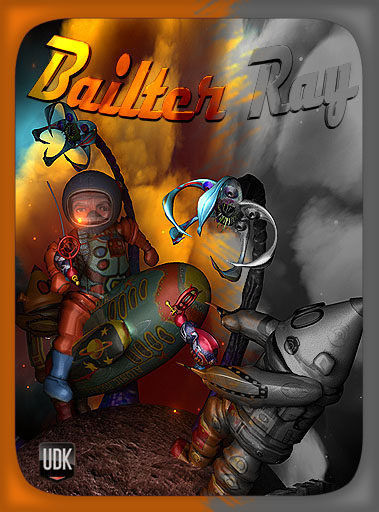 Originally Bailter Ray was made with a target audience of children (4 +) in mind, we felt there was a need for child/family friendly UT3 Mods.

We wanted to focus on simplifying game design by scaling the scope of the project to enable a small team to iterate quickly within a short time frame. We spent a few weeks building a simple demo/sandbox to try out some of our ideas, for example the dodging in and out of the 2d gameplay plane. We then experimented with different level design configurations and added a simple UI.
Though we liked what we had, we decided to spend another 12 weeks redesigning the art assets (an excuse to refine modeling/texturing skills), we added power ups, collectable items and a gameplay introduction tutorial.

What we end up with was a kind of portfolio piece 15- 20 minutes of demo gameplay with a fun prototype level as a bonus reward.

Bailter Ray is a retro style (side scrolling) sci-fi platform shooter. Inspired by games such as Turrican, Megamen and Abuse.

Take control of marooned Astro-Explorer, Captain Phoenix Valentine as you’re compelled to explore, jump and ray-gun to survive the dangerous attacks of an alien planet’s inhabitants.
In order to get home, Phoenix needs to retrieve his space ship’s power supply (a wind up key), and locate his rocket ship.

The player navigates and explores various areas of the level and is rewarded with points by eliminating enemies and finding collectable alien planet “samples”.

Points are deducted for losing lives so a negative score is possible. In the process of exploring, the player discoverers new enemies and learns new skills to progress though the game.

The Make Something Unreal Contest has come to a close and the winners have been announced, it's great to see some of most amazing mods finally getting...

Its taken some time, but the wait is finally over. That's right! Bailter Ray v2.0 has finally arrived. Packed with a shocking amount of new content!

Bailter Ray has made it through to the finals of the make something unreal contest best non-FPS Mod category, this should enable us to update our mod...

Bailter Ray v2.1 - Full version Release of Bailter Ray! This update includes many changes and way to much new content to list!

Source code for Bailter Ray v2.1 - A big thanks to the modding community, we wanted to give something back in return.

Gets stuck on loading. Just loops for eternity. Unplayable.

OMG, In the garage (one of my favorite songs) set to nintendo style music. I've watched the video 3 times just to listen to it. How do I get my hands on that music? Is there an mp3 of it or something when you get the game? The game looked pretty good by the way too.

Tracking, lets see what happens of this.

This is excellent! Reminds me of the olde-time Amiga platformers.

Remarkable! You guys are great!
An outstanding job and I agree - thank you for sharing code for us to have an idea of what it took to make this! I really appreciate you gameplay thinking and imagination to make this game!

Remarkable indeed. The level design looks fantastic and a cool game-play from what the trailer shows. Will give it a try and rate it.

played version 2.1. Well done, but how many collectibles are there to find? I tried to find all of them but I only can get 12, in the speedrun are also only 12, but the game says I must find 13 to get to the bonus level. A bug maybe? But I guess the bonus level is nothing but the old 1.0 version of the game.

Good game anyhow, though a small outro instead of an Game-Over-Screen at the end would be better.

We originally added 13 collectibles, but during a presentation we disabled the 13th. Which was also when we captured the speed run video.

Go back after you get the ray gun, look for something only the ray gun can destroy :)

Thanks for the feedback G.A.R.
You are correct about there being only 12 collectibles in the speedrun clip, but in the game there is one more making it 13, you have to back track after you pick up the RAYGUN... it's hidden... (and yes the bonus level is the prototype level made earlier this year)