The Haunted is a fast paced thirdperson horror-action game with focus on a intense multiplayer experience that is all about making a stand and liberating cursed places from the minions of evil. The game features several multiplayer modes such as coop or demons .vs. humans where enemies are spawned and controlled by players. The outstanding visuals lay a perfect tone for the gameplay.

The Haunted was developed by a international team and is currently on it's way to become a full standalone download title.

And without further words, check out our brand new trailer and screenshots. Everything else on www.hells-reach.com 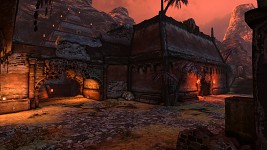 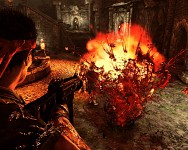 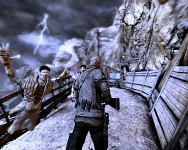 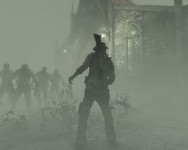 Also, everybody is invited to the official IRC channel #HauntedGame @ QuakeNet

See you in Hell!

The Haunted takes home the grand prize in the Make Something Unreal Contest! Watch the victory trailer and check out our official website.

The Make Something Unreal Contest has come to a close and the winners have been announced, it's great to see some of most amazing mods finally getting...

The Haunted strikes again in the MSU Contest, a look in the past and a little update on things to come.

Reward our hard work by voting for us in the mod of the year awards.

The Haunted 3.0 Pre-Release for the PC version of Unreal tournament 3. With installation tool.

A file that makes alot more monsters than the normal game example from 10 monsters by person it does 200 in survival mode with a maximum of 2000 monsters...

The Haunted 2.5 full release for the PC version of Unreal tournament 3. With installation tool.

The Haunted Patch 2.01. Requires the 2.0 full version of The Haunted.

The Haunted 2.0 full release for the PC version of Unreal tournament 3

Can't get this to run with my steam copy.

too bad it doesn't have bot support, fighting alone is hard :(

we are still plaing it :D com on WATCH THIS MOD AND PLAY WITH US

ho wants to play it with poeple with hamachi type me :) its fun playng coop

Well HEGI and Schlauchi, should really update their pages a bit.

The devs struck a publiching deal with THQ and are releasing this game in October for the PC, maybe later for the PS3, Xbawks 6.28318531 radians.
Source: Gamespot.

They also updated their dead, and rotting website, more info up now, including suggested price and preorders. 19.99$ and available on steam, hopefully THEY ADJUST THE PRICE CORRECTLY and I just might buy my second game on steam - the first was UT3 to play The Haunted ^_^
www.hells-reach.com

I'd say "peace out" but can't wait for some gruesome coop.

So much bad engrish, sorry are my fellings towards I.

Single & Multiplayer
Tags
Embed Buttons
Link to The Haunted by selecting a button and using the embed code provided more...