Take control of one of the numerous lordships of the Holy Roman Empire and fight for the ultimate double goal of both becoming Emperor and establishing the Holy Roman Empire as Europe's hegemonial power. This will be no easy task, as you have to weaken your inner and outer imperial rivals while still trying to maintain good relationships with them, especially the mighty Elector Counts. Often diplomacy will achieve what swords can not. Open rebellion against Imperial laws will result in suffering the 'Reichsacht' or Imperial ban and should be avoided, as your rivals will jump at the chance to attack you with the Emperor's consent gladly...
Or sit on the throne of one of the Germans' many rivals and stop their ambitions in their tracks...

This Mod for Medieval 2: Total War - Kingdoms focuses on a much more realistic representation of the Holy Roman Empire:
The vanilla HRE faction has been split and is now made up by the Duchys of Austria, Bavaria, Swabia, Saxony, Franconia, Upper and Lower Lorraine and the Kingdoms of Bohemia and Burgundy. These lordships are ruled by hereditary dukes and the all important (and hereditary) Elector Counts, who alone are able to vote in imperial elections. These take place in addition to the vanilla papal elections and have been added via script, as well as the 'Reichsacht' or Imperial Ban feature. This one punishes inter-HRE agressors with the 'Acht' and allows other HRE factions to attack them. In addition, banned HRE members are not allowed to vote and will never become emperor. Other new features include: Antipopes, Imperial Tax, uprisings, Counter Kings & Civil Wars, awardable titles as in MTW1 and much more!
Prepare yourself for a medieval experience you never had before - becoming Emperor while mainainting the Holy Roman Empire will not be an easy task!

New Map and Duchy of Bohemia Preview (The mod is ALIVE again after 10 years!)

After the Great Moravia fell to the raids of the Avars in the seventh century, Bohemia's Slavic inhabitants came (in the ninth century) under the rule of the Přemyslid dynasty. With Bohemia's conversion to Christianity in the ninth century, close relations were forged with the East Frankish kingdom, then part of the so-called Carolingian empire, later the nucleus of the Holy Roman Empire of which Bohemia was an autonomous part from the tenth century, encompassing the duchy of Moravia as well. Vratislav Premyslovec, he current ruler of Bohemia is making a bold move; he is planning on becoming a king, through the support of emperor Henry Salian during the Investiture Controversy war against papal supporters. If he succeeds, Bohemia may dominate the Holy Roman Empire. However, the path to success in the empire will be tough, as the enemies of Henry Salian crowned their own counter-king, Rudolf of Rheinfelden, Duke of Swabia, and he has indeed many supporters. Several of those supporters border the lands of Bohemia, including the powerful dukedom of Saxony, Bavaria and margraviate of Austria. One of the main competitors to Vratislav is its southern neighbor, Austria. If it defeats Austria, then Bohemia could become the dominant state in the eastern part of the empire. Should the civil war be lost, duke Vratislav would pay a great price...

Duke Vratislav however also has to deal with internal dangers, as there is lot of enmity between him and his three brothers. As per tradition, in this time Premyslovec dynasty uses seniority, and other heirs receive junior duke titles in Moravia, namely duchy of Olomouc, Brno and Znojmo. Two of his brothers, Konrad and Ota, are dukes in Moravia, while the third brother, Jaromír, is bishop of Prague. To counter the influence of Jaromír, Vratislav created new moravian diocese in Olomouc, although that resulted into a further conflict that had to be resolved by a papacy. Another danger to Vratislav might also be his ambitious son Bretislav, who is unhappy about the power of his uncles and that he is not an heir... 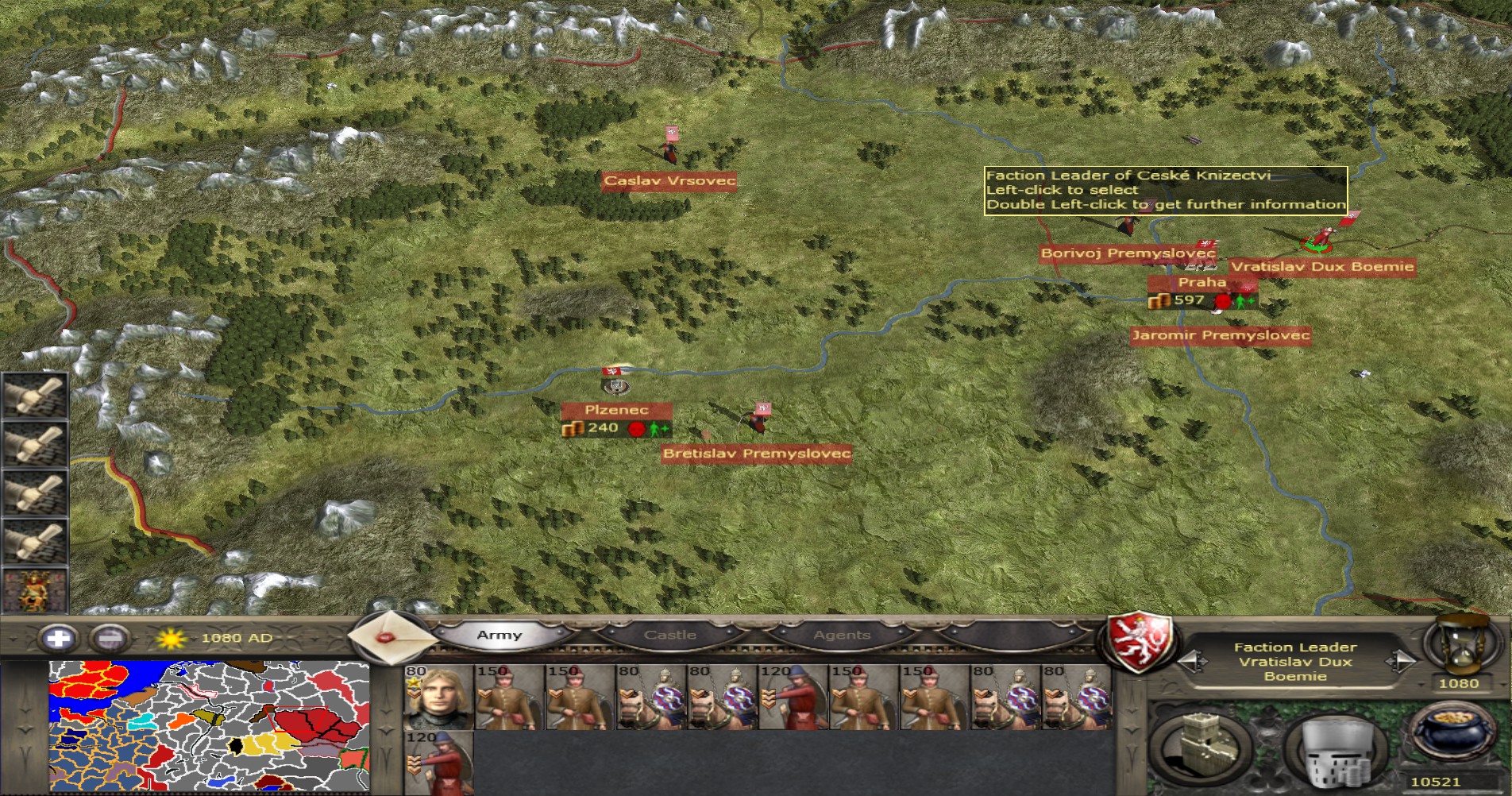 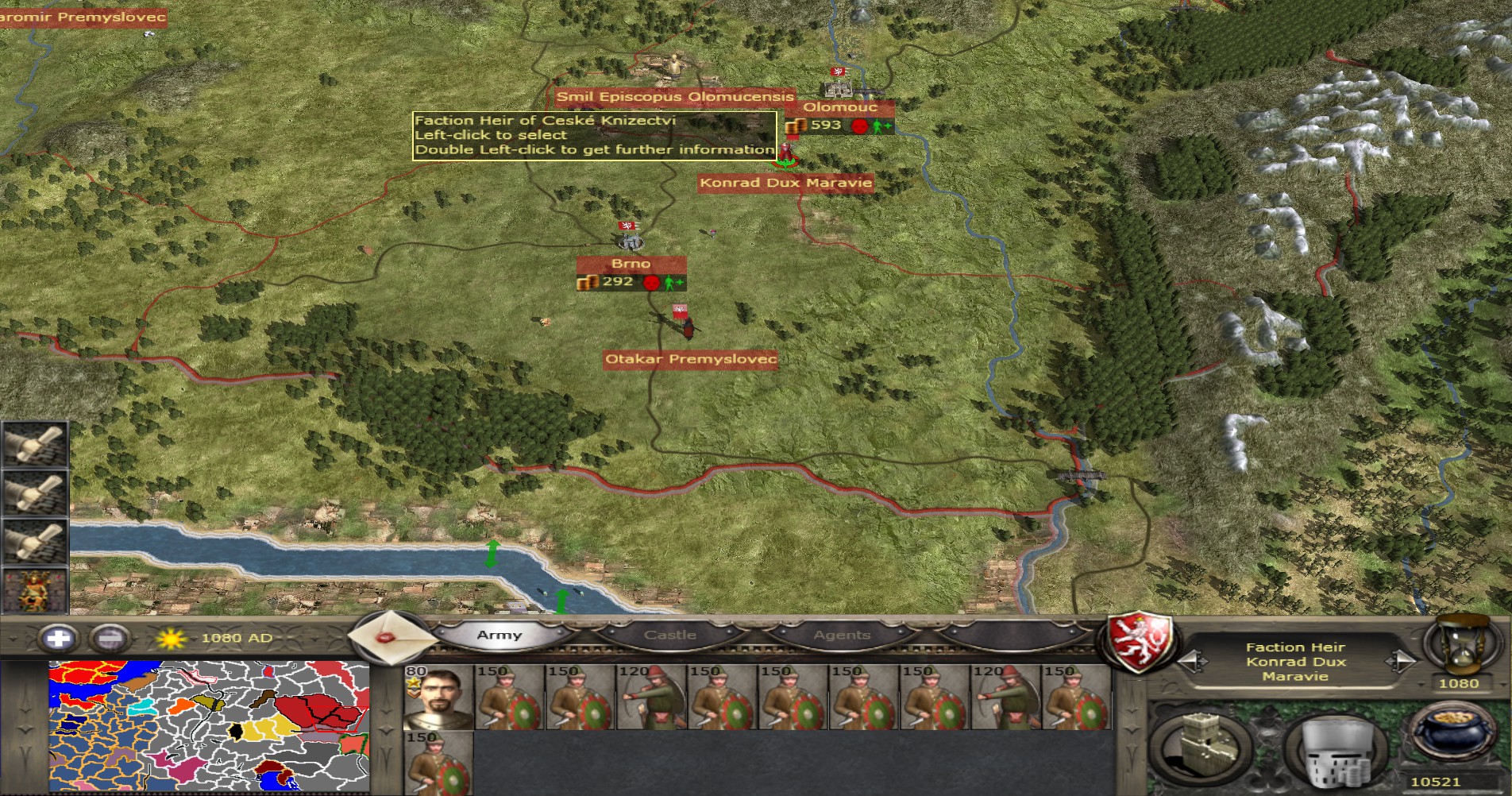 (For comparison, there is the old Bohemia from 0.8, so that you can see the increased scale of the new map) 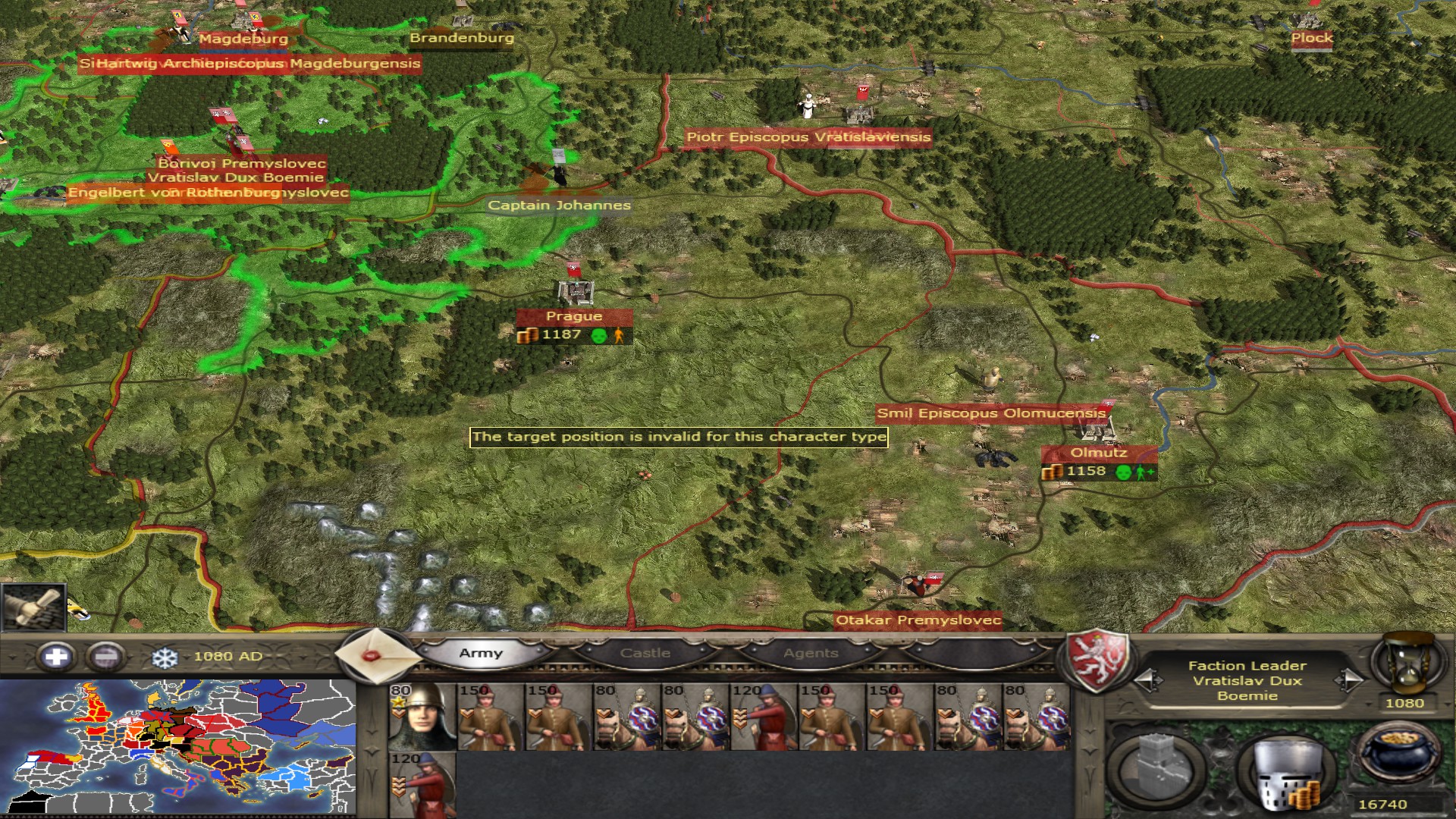 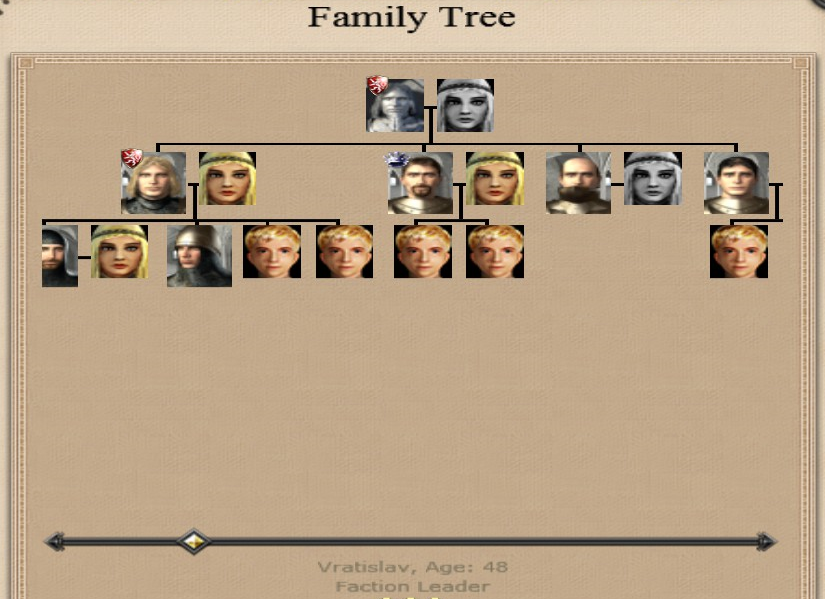 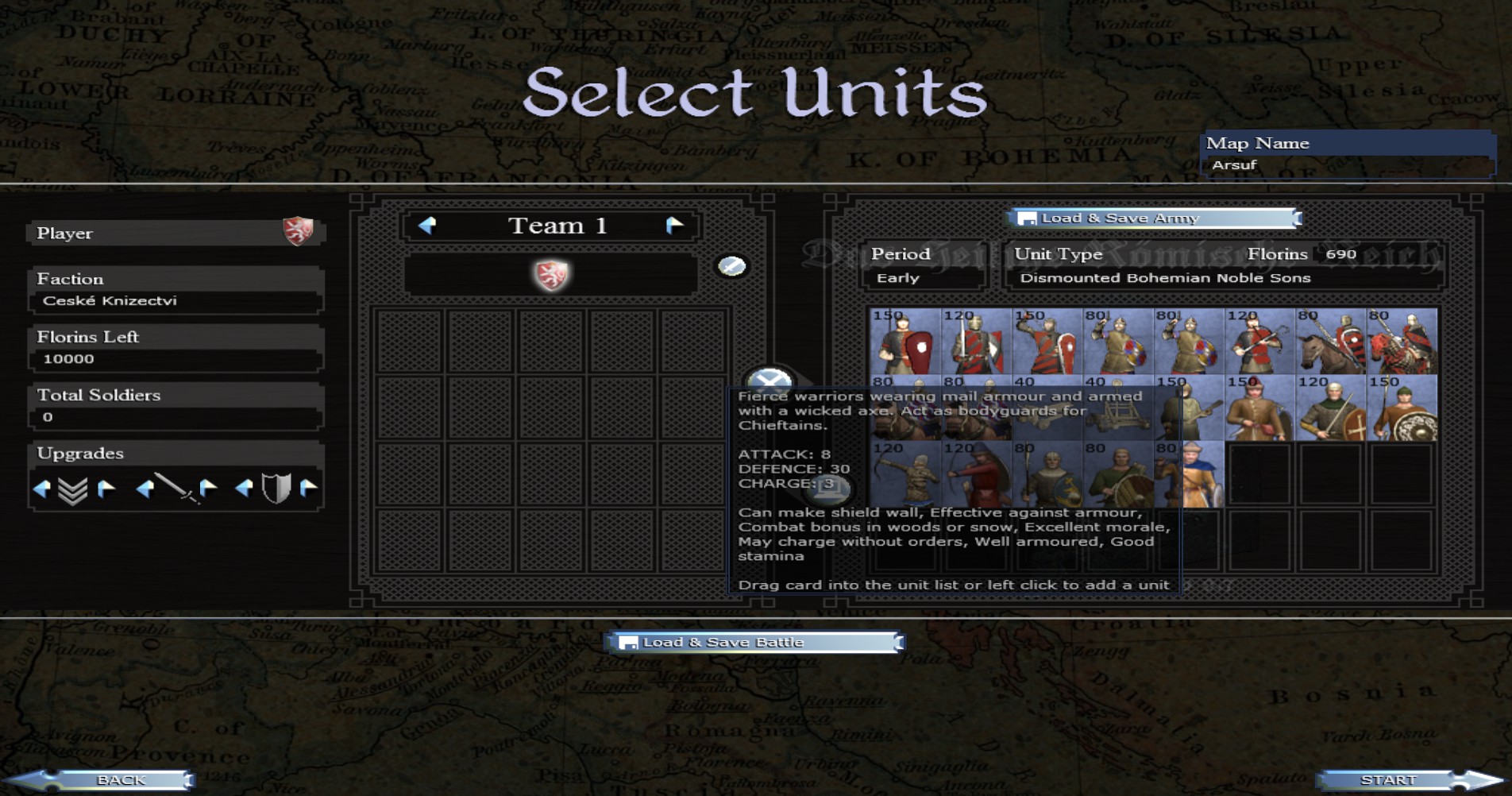 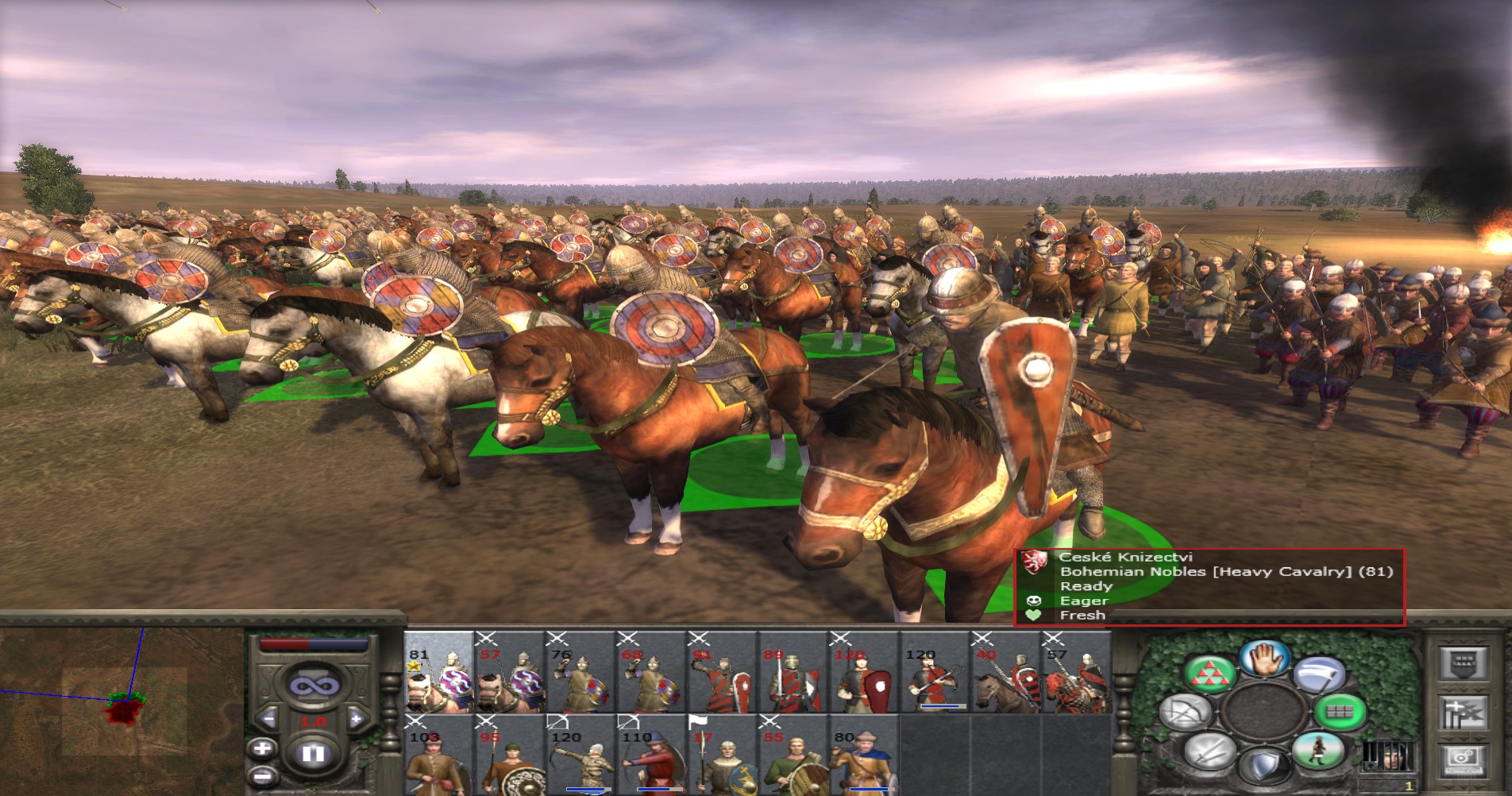 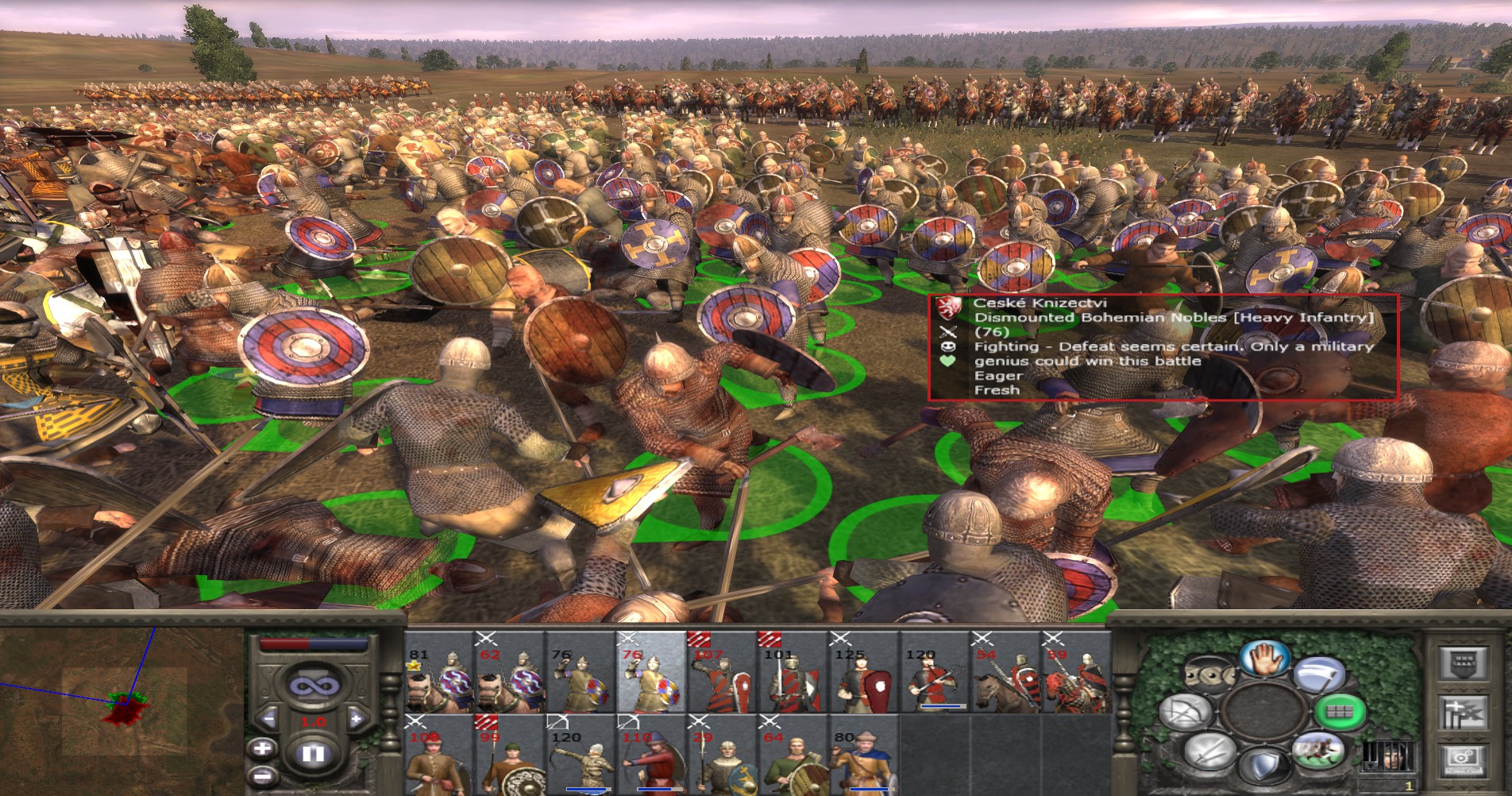 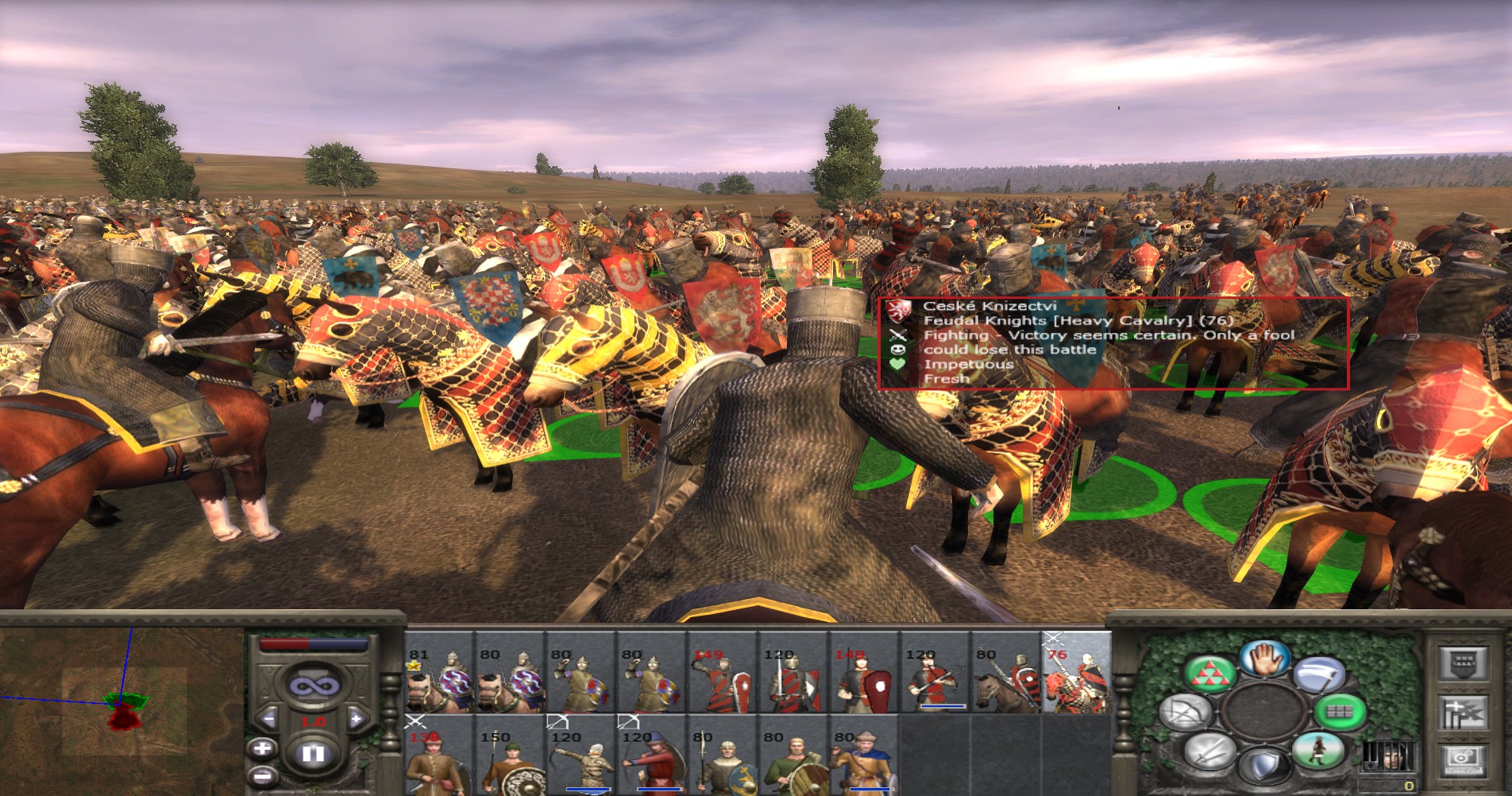 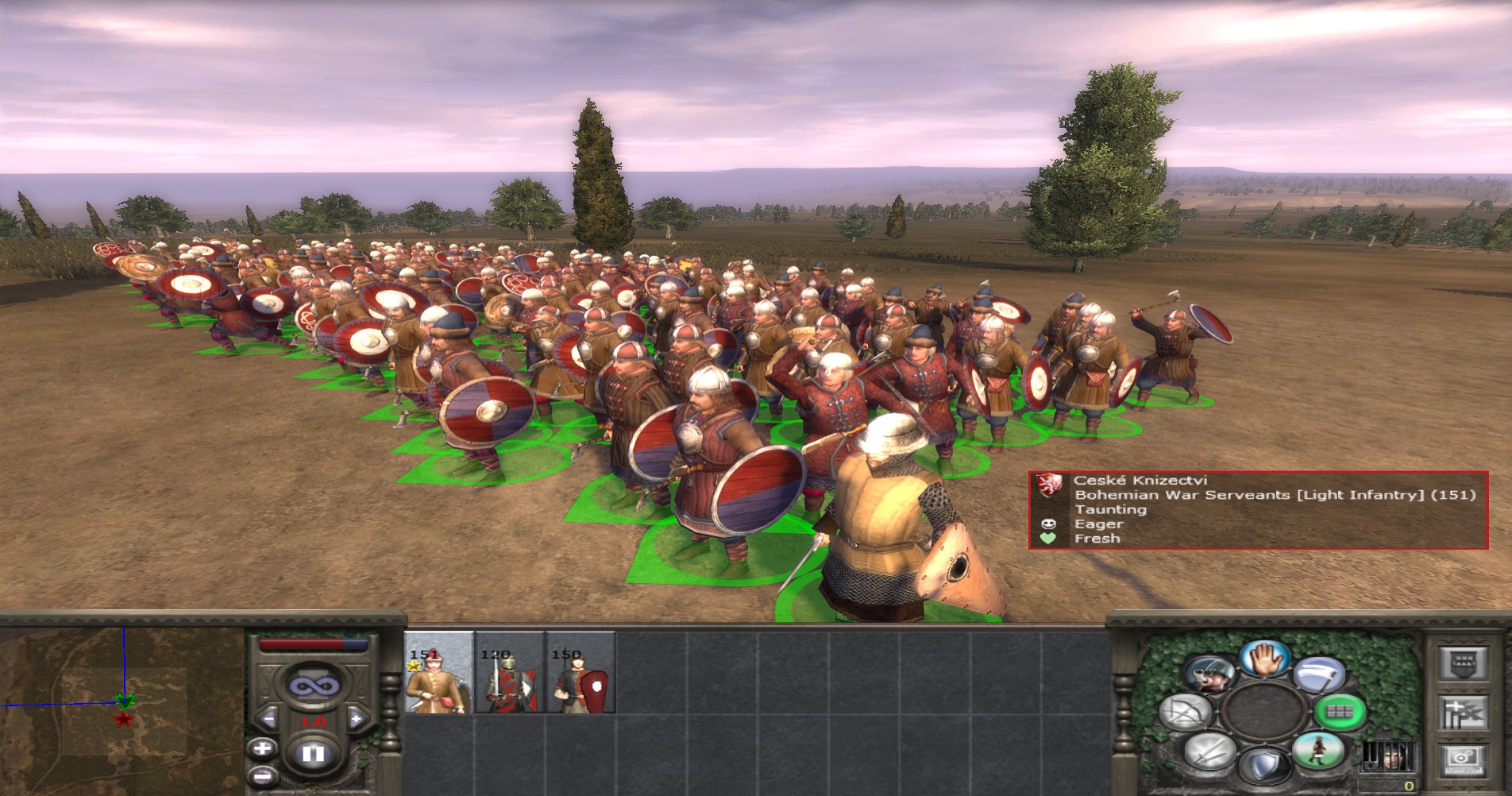 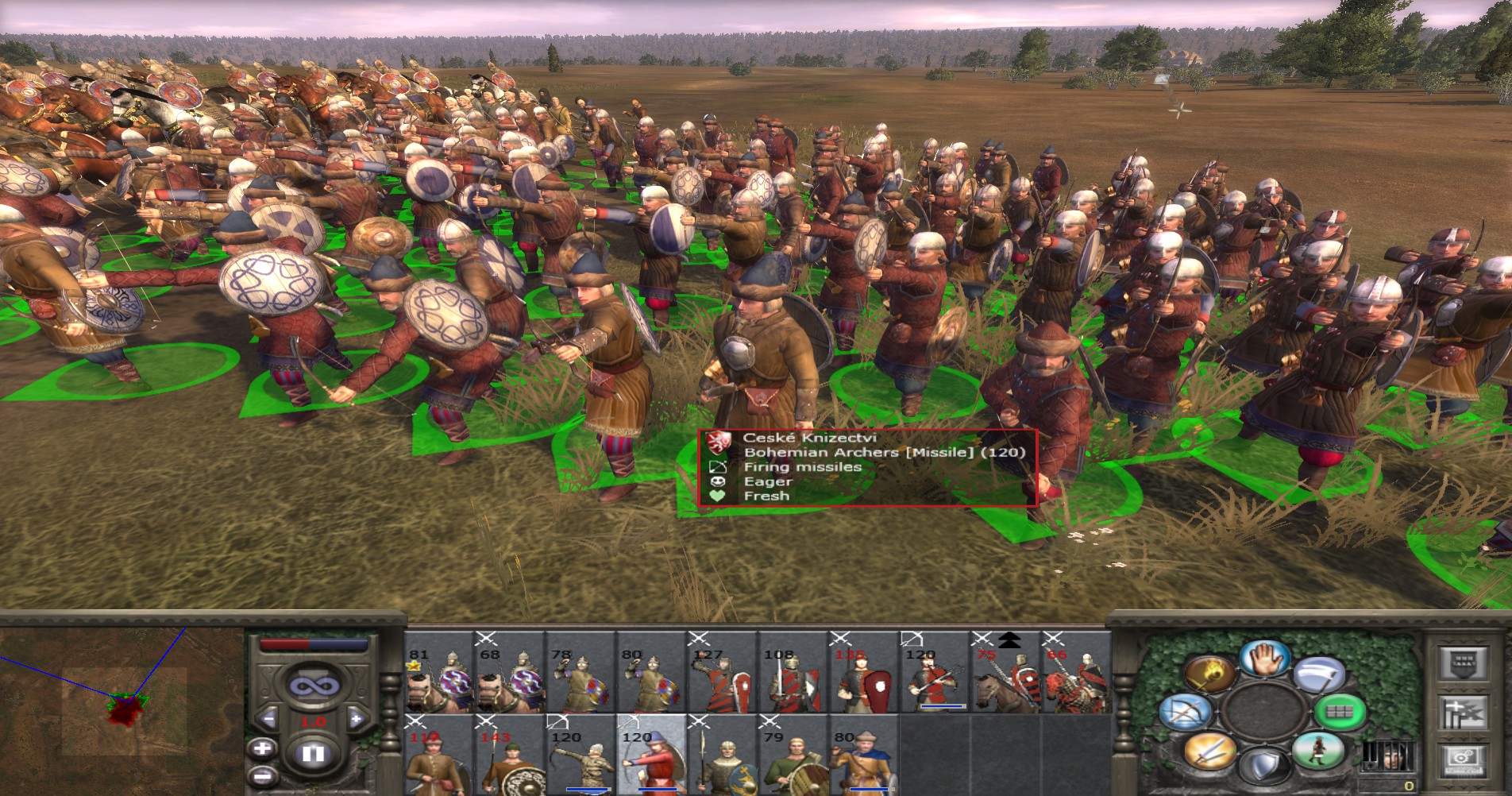 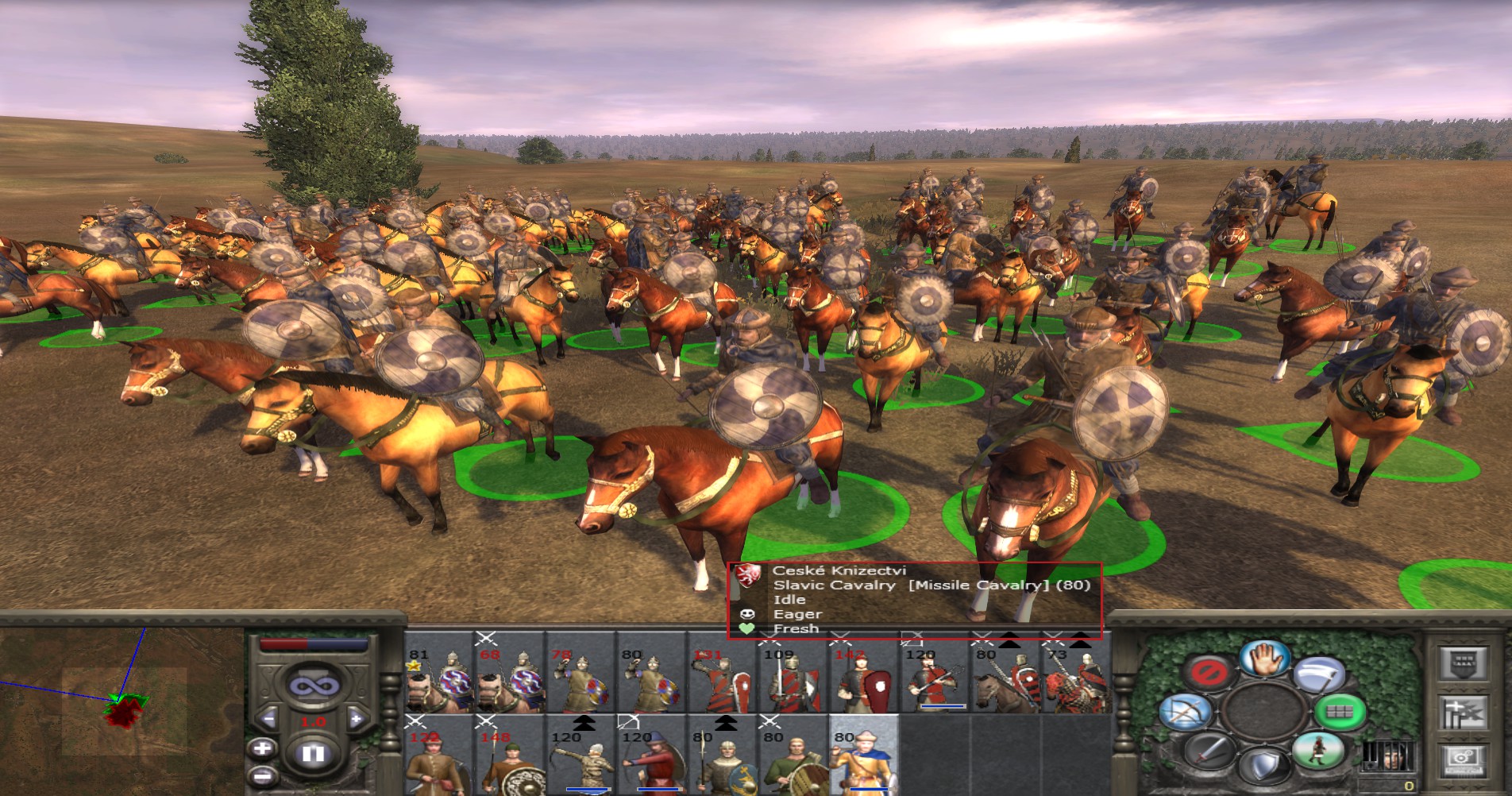 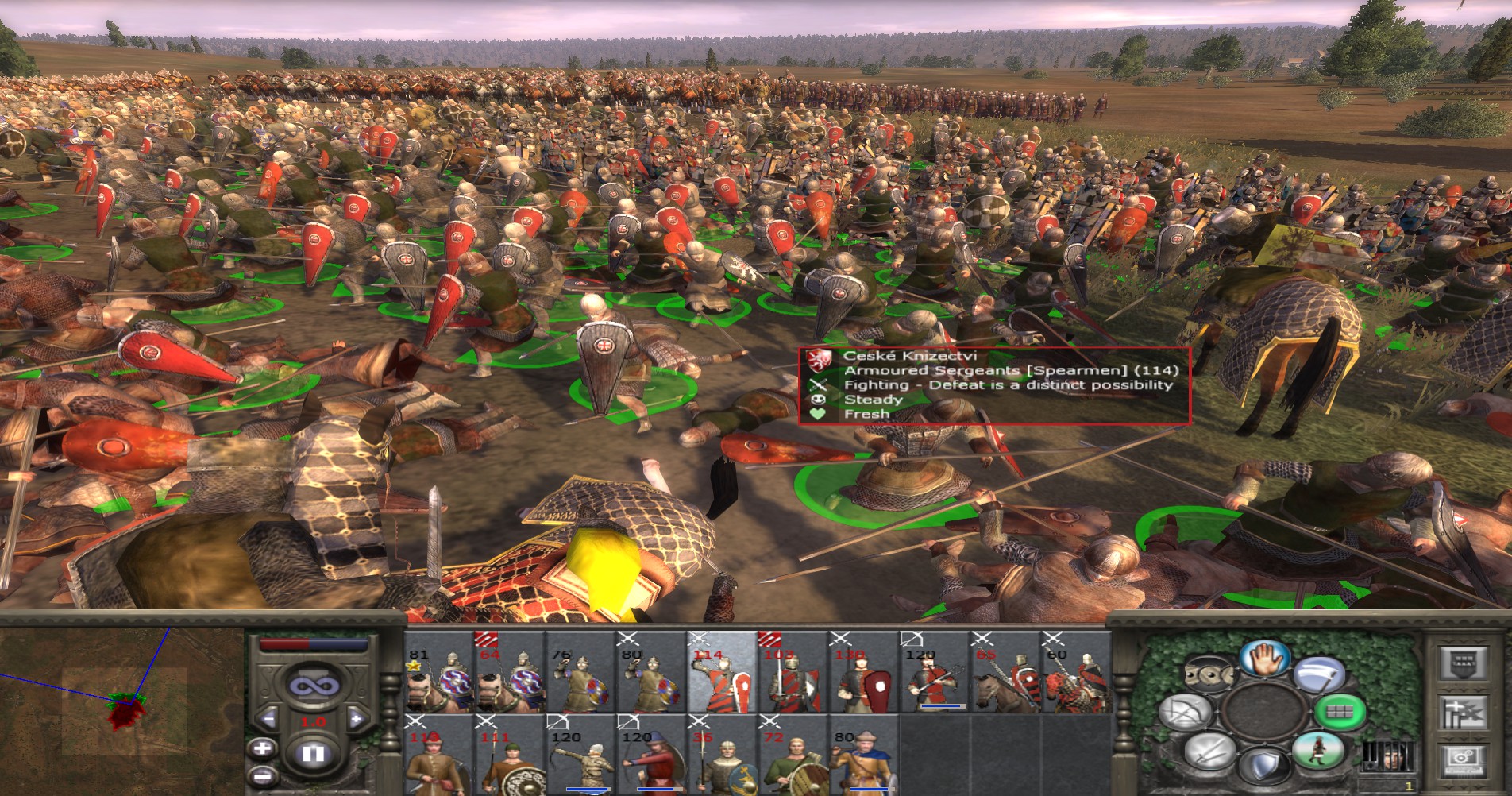 And in regards to the campaign and map as a whole, there is a small preview...

On the following map, you can see map of regional loyalties (to which faction is the population loyal to... Its not possible to assign it to rebels, therefore some "no one's lands had to be assigned to neighboring factions), this does not necessarily show starting positions as well, as that may differ a bit 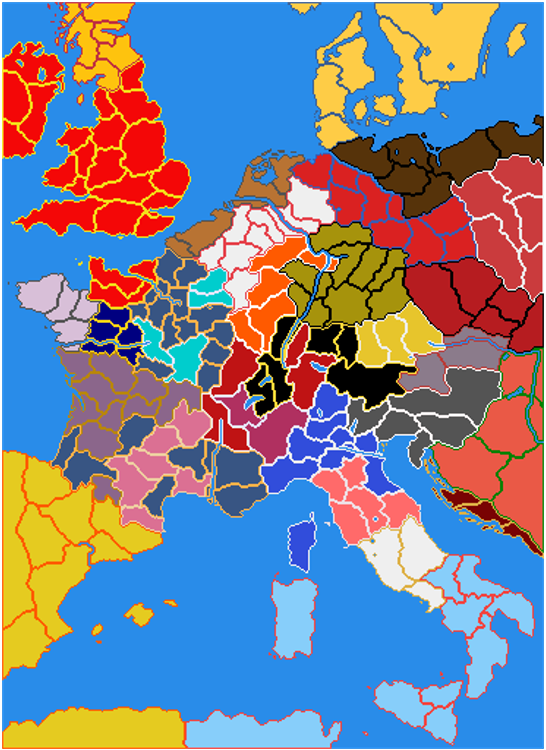 (The colours of factions and the regions may still slightly change)

And in the following map, you can see settlements, regions and a bit of heights map. 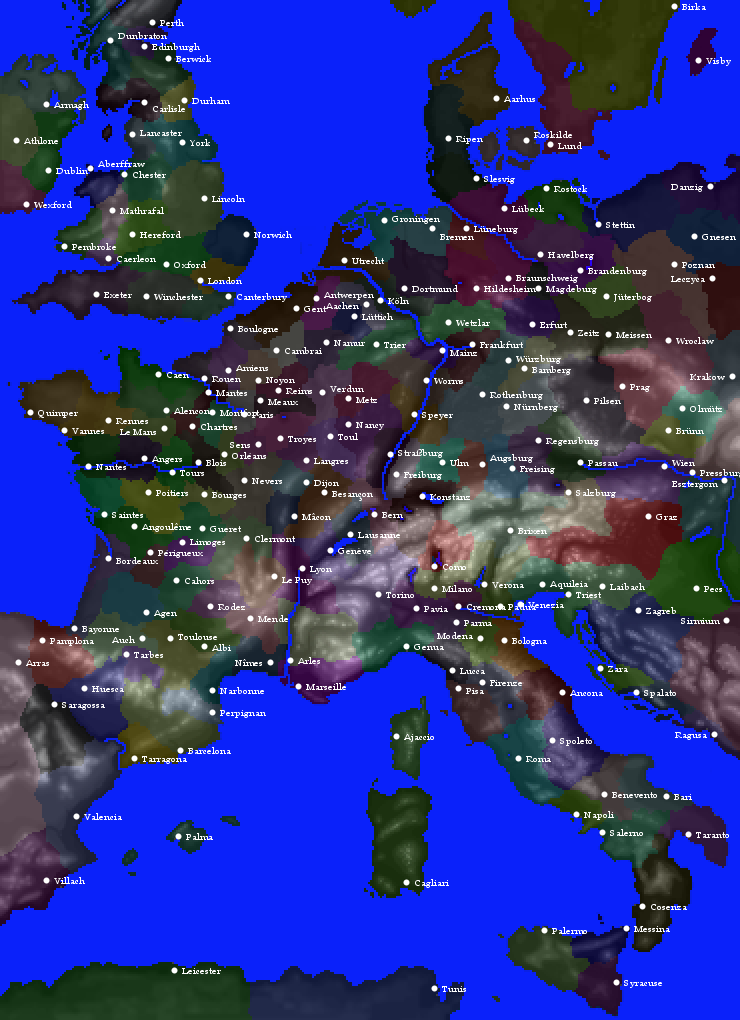 (and yes, those rivers are "sea rivers", so they can be made sailable....
there are plenty other normal rivers of course)

If there is anyone who can help please let me know, that would be greatly appreciated, as otherwise it will be really difficult to flesh the alpha out. Also, if you perhaps know some mods from a similar time period with a similar faction focus, let me know, as perhaps we would be able to use such features (with a permission of course).

This is all three parts of Das Heilige Römische Reich v0.7. Download also the Setup.

This is Setup of Das Heilige Römische Reich v0.7. Download all parts. Click on to "Read more" to see installation instructions.

This mod from the Das Heilige Römische Reich Team focuses on a much more realistic representation of the Holy Roman Empire. See File Details for more...

wait?? why is Ireland fully taken over by England?? England is in the Dublin area, the rest is under the Gaelic kings for must of Irish medeival history.

Its not the map of starting regions, but map of regional loyalities... unfortunately, as there is no irish faction and it is not possible to set loyalty to rebels, the only reasonable faction to give the loyalty to is England....

In campaign, they will likely be rebel indeed... this map was mainly just to showcase regions, and factions to some extent...

The mod is alive :D Twcenter.net

How did you managed to use the pope system with generals?

I assume this mod is dead right?

Do you need Toolbox if you're using the Steam version, or is it optional?

burgundy wasnt a kingdom, it was a duchy

Depending on the time period and location, it could be either a Kingdom, a Duchy, or a County Palatine.