Dark Evolution is a total-conversion (or at least, that's what I'm aiming) modification for Starcraft. It features 3 races: The powerful Hell Zerg The resistant Exiled Protoss The massive Infested Terran. - Update - After being dead, Dark Evolution comes back to life, better than ever. The next release, 1.3, will include new music, as well as new sounds, more balance changes, spell changes and new units. A minimal of 5 units will be introduced in 1.3 release. I hope in future releases the number increases to 10 or 12 units. Every race has now a different gaemplay, since their strategy has changed in many ways. You may not rely anymore on the Zerg's regenartion ability, but you can trust in great ofensive power, as for the Terran you may take damage but the numbers will pay back, and the Protoss might even have lower numbers, but their resistance and considerable offensive power can be the best of weapons. You decide who wins in this race of survival.

Dark Evolution completely changes the three races, but turning each one
into an alternative type of what they originally were. The Hell Zerg, Infested Terran, and Exiled Protoss. 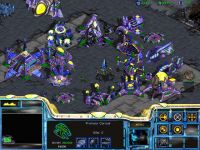 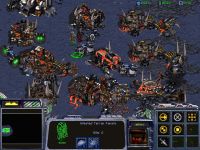 The mod is in development stages still, but a public beta is playable here
We need iscripters, aiscripters and GFX artists. Also some help with sounds wouldn't be bad, as well as voice actors.
Feedback is always welcome, good or bad.
Hope you enjoy it!

Dark Evolution Mod might change the Exiled Protoss to the Xel'Naga race. I plan to make stone-like buildings, so Protoss strength will have a reason...

For anyone that may be a bit dissapointed this doesn't really run anymore, here you are: Mediafire.com

Works with 1.16.1 even, too!
You may need to go into the Registry and make Program under Local Machine->Software->Wow6432Node->Blizzard Entertainment->Starcraft blank for it to work properly, though.

I'm using windows 7 64-bit with SC 1.15.1 and DE tries to start up for a second and then stops. Any advice? Tried compatibility, run as admin, repair, etc.

im trying to run it on win7, using 1.6 bw version, when i try to execute it it just does nothing, not even an anti-virus warning

Polaris in this mod?

Please make this mod return since it is so awesome.

Guys I use Vista and win 7,I am slso aptempting to play this mod with version 1,15,1 of starcraft, since it has a trojan I scanned the exe and removed the trojan, but the game wont start.

Do anyone know why?