Daggerfall Unity is an open source recreation of Daggerfall in the Unity engine, adding quality of life features and mod support.

Thanks for voting and helping Daggerfall Unity on it's quest to become the 2021 Mod of the Year. You are now in with a chance to score some free games from our #modlove collection. Help this mod secure more votes by embedding the widget (or link) we have included below on your favorite sites. 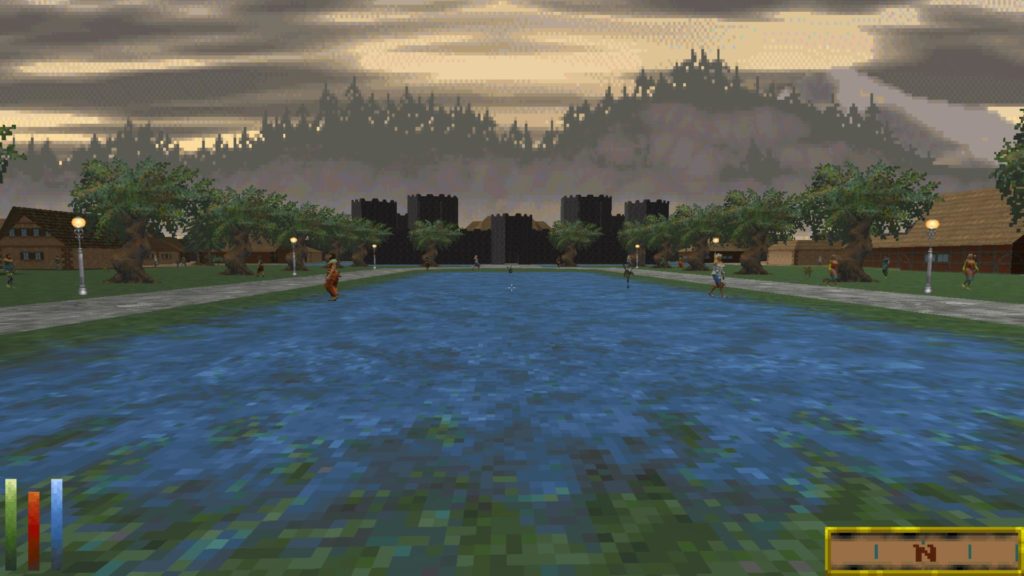 New builds are now available on the Live Builds page.

Looking to the near future, my personal workload has started to shrink again and I will continue work on rolling out spell effects soon. I somewhat prematurely celebrated my larger July projects wrapping up, only to have some of the smaller projects drag on much longer than expected. We should see a return to more regular incremental updates to magic & effects very soon.

On the plus side, the other developers have continued to work on systems and fix bugs. I'm particularly excited to see the custom class creator and outdoor swimming in this round of builds, as well as magic item drops for loot and stores.

Something that's hard to describe in point form is all the incremental changes forming the rungs of a ladder towards a fully functional magic system. All of these seemingly minor back-end changes such as potion recipe handling and magic item drops, and magic crafting stations, are all important building blocks towards our goal.

I received a little bit of disappointed feedback when potion and magic item crafting stations came online before potions and magic items were ready to go. And I imagine the feedback will be similar now that magic items are dropping but not yet fully functional. The thing to keep in mind is that once all of these threads come together, the final stages of fully opening up spells, magic item, potions, advantages/disadvantages, diseases, etc. will coalesce very quickly.

I've linked the Black Triangles story before, and it's well worth a read if you haven't already. It perfectly describes all the work that goes into making the back-end of a game functional while not much interesting is happening on the surface. The same is true of Daggerfall Unity as the various moving parts begin to mesh.

Get Ready for Diseases

Daggerfall Unity is approaching feature parity with classic Daggerfall. In this first post to ModDB in some time, we take a look at the disease system...

Implements a fragment shader for tiling from atlas, with corrections for texture bleeding and mipmap sample errors.

Changelog 1.1.2 : Once again I forgot underscores in the tracks's names " "song_gday___d.ogg" and "song_gsnow__b.ogg" Sorry again for the drawbacks (even...

I forgot an underscore in the track "song_gmage_3.ogg" So i replaced it with the 1.1.1 version. Sorry for the mistake, it's why there was no music in...

A minor fix, i forgot an underscore in the track "song_gmage_3"

Changelog 1.1 : - Some song names fixed to be played on all operating systems - A track name with the correct name (song_5strong) - song_snowing version...

You will find all the tracks of the original game remastered with patience and thoroughness. I tried to remain the most faithful to the original material...

The aim of this remaster is to use the samples and tools I have at my disposal to produce a cohesive and comprehensive remastering of all the midi files...

Surprise there isn't a companion and summon spell mods yet.
like adding in a thief companion name Garrett.

Is a full-release pack planned? It's not clear for me what to download to have the game be up-to-date.

Can you make it so you can remove spiders from the port? I'm an arachnophobe and the spiders scare me away from the game

Man up. They ain't gonna do anything to you in the monitor.

is this an ongoing mod,will it ever be complete?

development never stopped, its quite advanced and massive now

People seem to be a little mistaken as to what this is. This isn't Daggerfall for Unity, it's a set of tools for using Daggerfall assets in Unity.

If you want Daggerfall in Unity Interkarma is also producing an absolutely brilliant Unity port of the game using these excellent tools and a few community created mods. It's only in early days but once it matures (which it does seem to be doing rather quickly) it will be the way to play Daggerfall. Go check out Daggerfall Workshop for more information!