Gandalf for Bree or Rohan 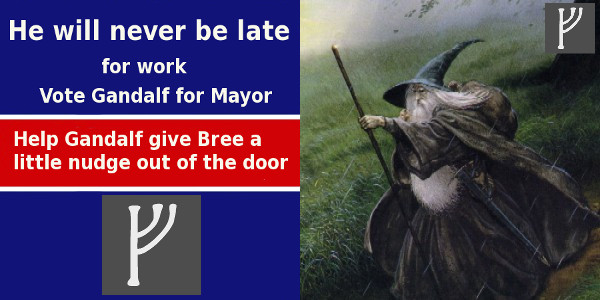 Bree-land may be considered a sleepy backwater, but if so it is a backwater dear to the old Wizards heart. Both Hobbits and 'Big Folks' he call friends, and when he travels through he enjoys an ale at the Prancing Pony as any honest man.
Will he leave them to their own devices, will he let them hold their own, as the clouds of war gather over their heads? No more.

Gandalf the Grey appear as a general for Bree-land during the campaigns progress [instead of for Northern Dúnedain, both for player and AI], with full set of skills, ancillaries, models and portraits.
Changes are the place of apperance (west of Bree) a rewritten event text and that the unit is Bree-land Bodyguards. 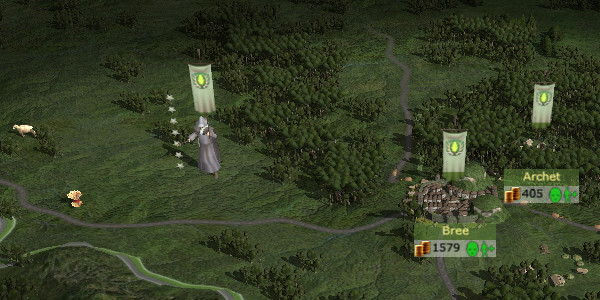 When do Gandalf arrive?
Same as for Northern Dúnedain; if you do not yet know, you'll experience it soon enough.

If Gandalf the Grey perish, he is brought back as Gandalf the White. Changes as per above. 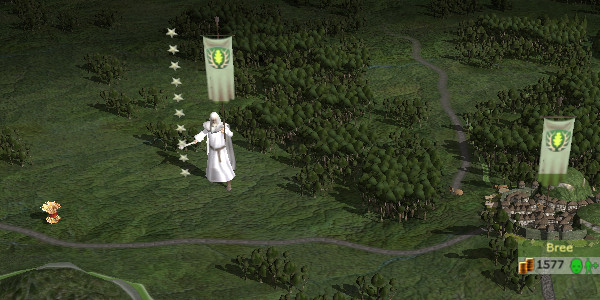 And who knows? If your campaign works in mysterious ways, he might even become Council Master, remembered as Gandalf the Mayor by history?

Gandalf is known in Riddermark as Gandalf Stormcrow, and at times his welcome is doubtful, for he is ever been a herald of woe. But to this the old wizard replies:
"In two ways may a man come with evil tidings. He may be a worker of evil; or he may be such as leaves well alone, and comes only to bring aid in time of need. Doom hangs still on a thread. Yet hope there is still, if we can but stand unconquered for a little while."

As with Bree, just for Rohan.
Fell deeds awake: fire and slaughter!
spear shall be shaken, shield be splintered,
a sword-day, a red day, ere the sun rises!

Free to use by DaC or any DaC submod; in the latter case as long as credits are given, to this mod as well as naturally DaC.
Permitted to use for any none-DaC submod if that mod has permission to concerned content by the DaC team.

Gandalf For X uninstall to DaC 1.2

A minimod for DaC v1.2 that gives Gandalf to the faction of Rohan

Obsolete uninstaller for Gandalf for Bree v1.0, replaced by "Gandalf For X - uninstall to DaC 1.2"

A minimod for DaC v1.2 that gives Gandalf to the faction of Bree

No, but if you want that you can follow my and Nimble's discussion that led up to this mod, and recreate it yourself for either faction (don't forget to get Notepad++ first, it's free but essential): Twcenter.net

Gandalf is already avilable for Dwarves of Khazad-dûm.

Lol, this should be an add-on rather than a mod.

I call it a minimod myself, as per the Summary, but as it's a modification of the files it's technically a submod.

Been a long while since I played DaC, is Gandalf already in the game in another faction, and this just switches him? Or does this add him to the game for the first time?

He's in the game already; this just transferes him from Northern Dúnedain to Bree-land, for those who prefere that extra spice for a Bree-campaign.

So that means you cannot use him as northern dunedain?

Not when this is installed, no, though that's why there's an uninstaller avilable ;)

This is a submod of the excellent Age of Petty Kings mod, if you haven't played it I recommend you go and try it out. This mod is standalone and doesn't...

This submod for Version 3 of the Divide & Conquer submod for Third Age: Total War allows the Northern Dúnedain faction to form the Reunited Kingdom of...

The new development of Chronicles of Myrtana 2.6.1 is finally completed. After the latest works, the public release of CoM 2.6.1 has taken place and awaits...

Gameplay plan so far; Each Great Battle in the books will be waves of stacks, some of which will have awesome generals (Glaurung, Gothmog, Balrogs, Sauron...

No Aor and Max Units for Divide and Conquer 4.6

--I made a personal mod for Divide and Conquer 4.6- NO AOR & Higher Unit Limits.-- 1- NO AOR for most units. This way you can truly build up your empire...