D's Mansion is still in development. The game will be set in various parts of fictional London. The mod will have a full narrative and story from start to finish and will feature more then three endings. You can guess how many endings the mod will have but it will definitely be more then just three. I will re-name this mod in the future.

MissD's Mansion is still in fresh stages of development however I fear it may take very long because it's still in the those stages, so I will release some parts of the model here for anyone to play with. I've decided to release these models to attempt to show the level of class the model would offer. I will tweak these models as I progress. I would think I've hold these models for too long. I've had these models for two years on my hard drive and I got around to working on them.

The models are a Wooden Bench where non-player characters can sit on, a beach ball which could be picked up and thrown around, a European traffic cone and a VIP Pole with rope attached to it, which should be placed in the levels and used to edit with. 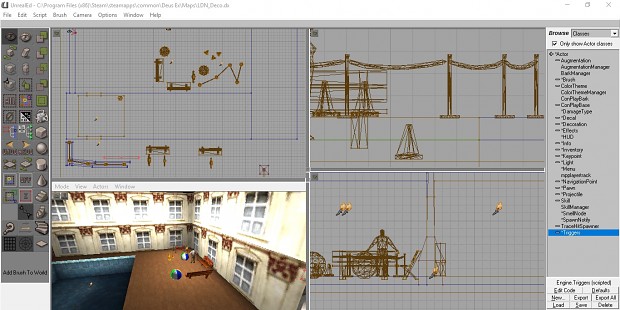 You can view them in the editor, so it shouldn't be a problem.

There's alot more models that I will make and add in the future which will be found in MissD's Mansion mod. I plan to work on them in the future and release them with the mod but I'm not sure yet, but for now, you can play with these. The help forum is here if anyone wants any help: Moddb.com

MissD's Mansion is still in development

MissD's Mansion is still in progress, first part of information of what this Deus Ex mod will be about.

Hello. Due to a download that I've laid out here and thoughts about what to do with the work I've created, I've decided to work on an mod based on the...

how i can save since it is a bug

It's not a bug... that file by default hasn't got a node which prints that message so you can nag me to fix it and so I can get to work. The Deus Ex engine was programmed to display whenever mappers get lazy at work. Thanks for letting me know, I'll get that sorted when I release the mod.

good luck :) i look forward to trying the mod

Oops. Tried to comment without logging in. Anyways, here's what I intended to write (not seeing it on page comments, so I hope I didn't duplicate comment)

Good luck and welcome to the modding community. I've seen some of your other smaller works around, but it's nice to see you're taking on a slightly bigger project. Cheers.

Sure, thanks. I've got together what I want and hopefully it should meet the size that many modders and player want from a project.