Creature Chaos is a free expansion mod for Impossible Creatures, adding many new Creatures and balance changes. It finally makes it possible to use the almost unlimited ammount of combinations online, without only a handful being the most cost efficient.

Work on Creature Chaos 4.23 has been completed and it is now available for download. Although initially mean to be only a small patch, we have added the complete Woodpecker and Grasshopper, as there's no reason to keep them from you any further. Many of the much complained about balance issues, especially regarding the 'Herding' and 'Regeneration' abilities have been resolved, as well as another number of small changes including:

- Loner added to Liopleurodon
- Alien back to 2.82 values but retains tail attack 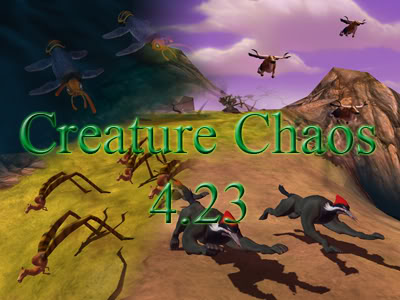 Should you not have Creature Chaos 4.2 or higher installed, download the full version here.

If you have downloaded the full version previously and it is not working, you currently need to add this fixed DLL into your Impossible Creatures folder.

On another very pleasant note, our long endeavour for recreating the old online services has come to an unexpected end, as Dengus, a former frequent online player has provided us with his own version.
All you have to do is start the game with this exe and log onto Impossible Creatures Online.

This is the fixed full installer for CC 4.23. It includes the cc.dll that was left out of the other installer. Use this if you do not have CC 4.2 or higher...

This is the full version of Creature Chaos 4.22. Install it to your Impossible Creatures directory. It requires Insect Invasion 1.4 in order to run.

This upgrades versions 4.2 and/or 4.21 to the latest version 4.22. Note: If you'd like to keep your armies, rename the folder "Creature Chaos" in "Impossible...

it's a great mod but when i play with my friends on the multiplayer i can't add computers to the game so.. how to add them??

hey i was wondering if you guys could like put in some dinosaurs or something because you added liopluradon... just wondering... also if you do can you make it so its apply-able to the demo version to? because im like 14 and i can afford the full version...

What does the lemmings "imaginary hovering" ability do? I have not seen a lemming jump off a cliff yet. Is it there for lols?

It is bugged that i automaticly win the game after i start it! HELP! (if anyone has the same problem)

A dead mod. A good mod. But a dead mod now.
And I can't play it. My problems will probably never be soluted.
:"(

I'll download this as soon as I got my game back^^
Is this mod compatible with Patch 1.1 (is it required?), the 10 bonus animals and the Insect Invasion AddOn?

It should be, the game separates those mods...

Ok, my question with the Patch and the Insect Invasion was not very smart ;-D
But what about the 10 bonus-creatures? Is the mod compatible with that download?

Well, an answer would be very nice :S