What is CURE?
Codename CURE is a first person, co-operative zombie game with support for up to five players, providing immersive, fast-paced zombie fragging with fully dynamic/objective based missions.

As a team of special military operatives utilising a range of powerful weapons/equipment (assault rifles, shotguns, sentry guns, supply chests and more), players are tasked with curing infected areas of a post-apocalyptic world by planting controlled explosives before pulling a short sharp exit.

CURE can be played both on and offline, with or without computer controlled team mates. The game sports a variety of difficulty options which adapt dynamically with the number of players including five balanced player classes: Pointman, Support, Assault, Technician and Sniper

Codename CURE has now been released on Steam via early access! 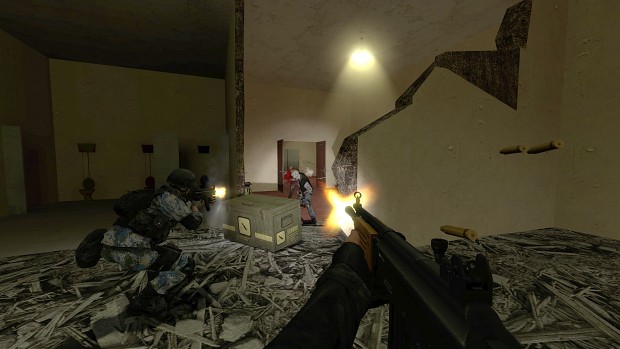 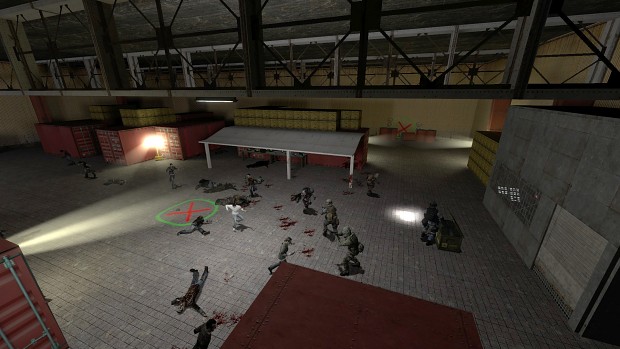 I would like to say a huge thanks to everyone who has helped make this possible, including all the testers, mappers, asset authors, ModDB and of course Valve.

Good luck all and have fun!!!

CURE has been launched on Steam Greenlight, with a view to release B3.0 (and onwards) directly via Steam.

An all hallows eve teaser update, showing some of the progress being made on CURE Beta 3.0.

*This is an older legacy version the latest version is available via Steam early access. ----- CURE B2.0 - Mac OS X Disk Image Installer. Use for installing...

*This is an older legacy version the latest version is available via Steam early access. ----- CURE B2.0 - Windows Installer. Use for installing easily...

*This is an older legacy version the latest version is available via Steam early access. ----- CURE B2.0 - Linux / Zip folder. Use for installing on any...

*This is really old legacy version the latest version is available via Steam early access. ----- The full Beta 1.0 zipped folder... For server admins...

*This is really old legacy version the latest version is available via Steam early access. ----- The full Beta 1.0 installer... The quickest and easiest...

Extremely fun game, I loved it. Here some suggestions:
1- Less recoil for the MP5K, because of the frontal grip.
2- Support should reload slighty more fast.
3- Technician should have a ability to repair his sentinel.
4- Add a Medic Class that can heal other players and revive downed ones (that should delayed) Suggest for weapons: Primary Weapon: UMP; Secondary Weapon: Deagle
5- Add a Trapper/Hunter Class that put land mines/claymores/trip wired traps around. Suggest for weapons: Primary Weapon: MP7; Secondary Weapon: Glock

good game i liked it,but i believe there is room for improvement some examples:
1) more weapon per class to select at the start of the game.
2) save your load-out based on your class( see cz).
3) too many shotgun classes,make it one.
4) more weapons including Grenade launchers,laser trip mines.
5) zombie cool down per room (you clean a room,stop Zombie spawn for some time).
6) detail maps,add more props,more texture variations on walls ect.less "square" maps.
7) more player models and skins(female characters,HECU team,survivors,police)based on the map.
8) voiced characters and actions ex. "take cover nade!" "die!" "help!".
9) medic class with ability to revive fallen team members.
10) voiced mission briefing with some short story.
11) level system to promote or demote players,(not rp) just give a promotion tag name next to the player name.for example you promote the player for doing all maps or demote him for going alone.
12) make maps to favor specific classes like the sniper.for example a guard tower to camp and cover hes team from distance,or doors that open only from an engineer class.

The zombie spawn is the only downside, you look for a second behind you and 10 zombies spawn RIGHT where there was nothing. could maybe improve this odd behaviour.
Else its good.

Zombies should not be able to spawn within a line of sight to the player (no matter which direction the player is looking) they could spawn in a room (or behind a blocker) behind you though and run out of said room/blocker to attack you.

Its possible with a high ping on a server you could see a zombie spawn as the your perceived position is different to what the game knows as you last position.

Either this or some custom maps such as metro tunnels impliment a custom spawn (I believe) for zombies to spawn in a specific place (whether the player can see it or not) this would not be the case for official maps however.

Female models in proper military fatigues/gear would greatly appreciated. Love the game, but not a fan of the only starting models.

Having only played this for about 2 hours, i can only say that much, that i am already hooked. This is a really great little coop mod, while maps are not the prettiest, the gameplay more then makes up for this! The gameplay is very solid it's fast, team-based and just generaly somewhat arcady. Gun play feels really well done too, there is actually some kick behind firing a weapon. All this combined makes it fun for hours. The classes are also very good, and feel balanced through out. Classes are…