A short news about version 0.7 which is now ready for download.

I'm pround to announce that version 0.7 of One Vision is finally finished. As of today, it has been exactly 8 months of waiting since the last release in october.

While I've never been truely idle, but 6 out of the 8 months were caused by my obligatory military service which slowed down the progress of the mod heavily.

As I announced in the previous news, version 0.7 of One Vision awaits with more changes and new content than any version so far. In total, 126 changes have been made with 25 of them being completely new content, distributed between all nine factions.

While there is still much left to achieve true uniqueness for each faction, the multiplayer tests have shown that One Vision has already done a good job at giving all factions a new edge and provides the game with fairer balance.

The only faction left for a big rework is Reaper-17 which will receive an own update in the coming weeks. I did not want to prospane this release of the mod only because of a single faction.
Reaper-17 is in a very playable state, however it is currently simply less advanced compared to other factions.

Also, all known bugs have been fixed but if you see one, please be sure to contact me on the forums, via pm or on the comment section.
This also applied for possible balancing issues or your ideas and opinions in general :) 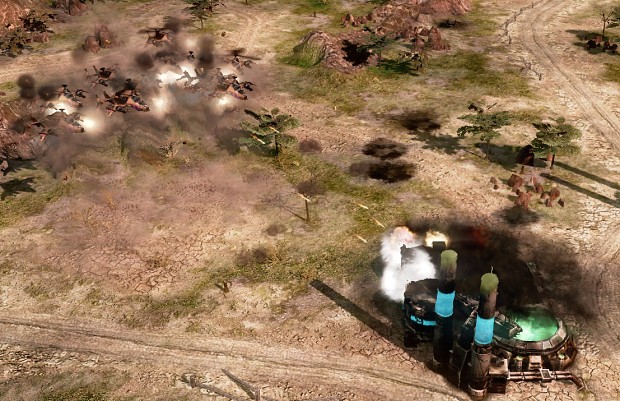 If you want to know what you can expect, you can read the Changelog of v0.7 on Pastebin:
Pastebin.com

This Changelog, as well as the changelogs of previous versions are included in the download package as well.
So, why are you still reading? One Vision 0.7 is longing to be finally played ;)

Please not that if you cannot see the download of "One Vision 0.7", don't worry.
It simply means that there is a bit more time needed until Moddb has given their OK for the mod to be released.

its an excellent mod. bug free and balanced. though I have a proplem with the renegades (NOD) Harvester. when it comes to a point in the fill bar it stops harvesting and start going forward and backward. but it doesnt happen every time its rarely to happen.

this is odd, I just made a few additional test matches against the AI and everything worked. Was it on a custom map, maybe?

well yes it was a custom map. but never mined it doesnt happen any more

Can I have this mod and 1.02+ installed at the same time?

I don't know exactly, but the mod was not designed to work together with 1.02+ and even if both mods would be launched the result would probably only cause errors.

However, many bugs have been fixed in One Vision, if there are still bugs present, please let me know.

i have the both and both are working fine but if isn's with you then delete all your save replays and it will work.

Thanks for answering. Do you guys mean that most of the bugs fixed in 1.02+ are fixed in this mod as well?

Well, I haven't had a look at the changelog of 1.02+ to know all the issues, but everything I know about and stuff people reported is fixed.

I am unable to download the Wrathed Mod Launcher. When I go the the link you provided in the "how to play this mod" file, it says that the file has been removed because of a violation of the terms of service.

Sorry, the file has been removed from moddb but you can download a brand new version from the creator's website: Bibber.eu

got the mod installed, after execution it asks for a name to create a new profile, but what ever I write in and hit Accept, I get a CTD

What? I've never heard about such a problem. Does it only happen with One Vision or is this a general problem? You should try to reinstall it.

Otherwise, you could also try the new version of the modlauncher that can be downloaded here: Bibber.eu

how can i play this mod if i can not download wrathEd 1.09 from anywhere?

I will create a news about that in the following days

got things up and running and it's a solid mod, kudos to you for your work. i noticed some typing errors(harmless obviously) and some errors in the upgrade references in the bottom right of the screen
looking forward to future updates!

Thanks :) and sorry for that I have nobody to proof read it ^^.
It would be really great if you could tell me what things are exactly wrong so I can correct those things.

hey Zocker4ever, thanks for the aweosome mod, keep up the good work!