C&C: ShockWave is an enhancement mod for C&C Generals: Zero Hour. The main goal of this mod is to make Zero Hour a more interesting game with more diversity between the generals, making you think twice before you select a certain general, and overall provide more choices, diversity, and strategic freedom than in Zero Hour - while keeping the spirit and design direction of the original Generals game and storyline.

Yes Generals, the long-awaited moment is finally here. The 11th anniversary of C&C Shockwave is upon us, and with that, the release of our Anniversary patch.

Yes Generals, the long-awaited moment is finally here. The 11th anniversary of C&C Shockwave is upon us, and with that, the release of our Anniversary patch. 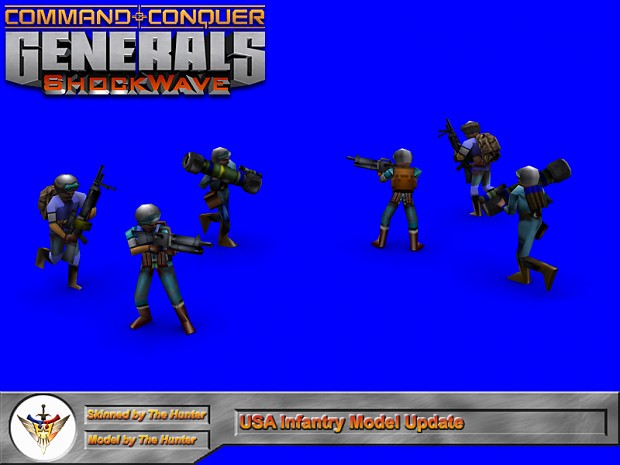 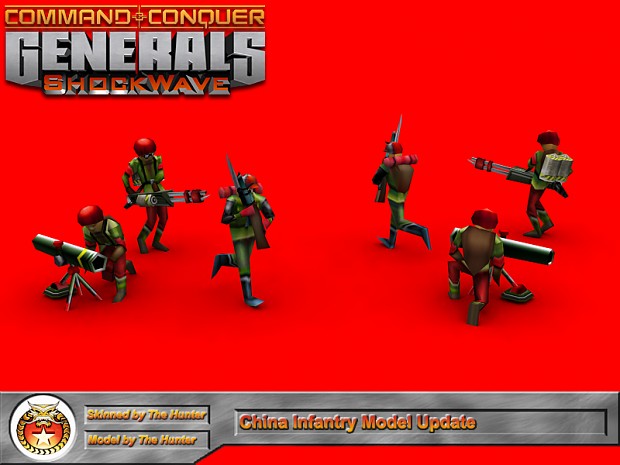 11 years ago on this date, The_Hunter released C&C Shockwave 0.8 to the public. At the time, it was a simple balance patch with a couple of new units. It has significantly grown since then to become more than that, but still contains the fast paced gameplay we love from the original Zero Hour. And now, a new version dawns on us, in a new era of the C&C community. On behalf of the SWR team, GeneralCamo, and myself, we thank you for your support throughout the years and welcome many more exciting years to come. We will continue to support the Shockwave community for the foreseeable future, and will continue to make patches to balance the game, fix bugs, and maybe even add a few surprises along the way.

Do note that this is a full version, and you should uninstall 1.1 before installing this. Also note that we haven't tested this with the General's Challenges, which will be entirely reworked in a future patch.
Also, we will not be providing a no-installer/Mac release for this version. (due to a limitation of the Mac release of the game it will crash consistently) 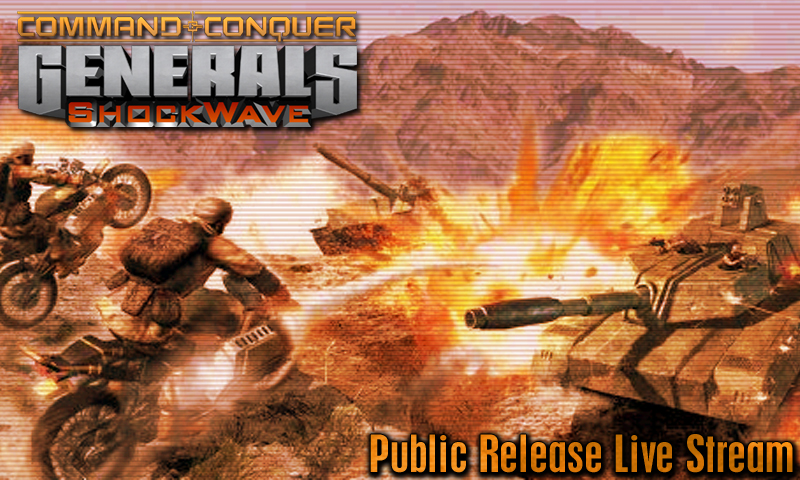 Also check out Hecthor Doomhammer's release streams on Friday at 19:00 UTC and Sunday at 14:00 UTC. Look for games being hosted by Hecthor Doomhammer himself during those times if you wish to be on the stream.

So that why general challenge crush the game i hope Deathstrike, Ironside and Leang get their own general's challenge maps

Leang has her own map since ZH, maybe you mean Fai?

No, he means the other two boss generals Deathstrike and Ironside and yes, Leang has her own map already.

hope is only thing we do!
and they make it happened ^_^

All challenge are crashing now.

"Also, we will not be providing a no-installer/Mac release for this version. (due to a limitation of the Mac release of the game it will crash consistently)"

Its in our blood to come back to the things we love the most.

Is this mod one of those mods where you don't don't need to have the Original Game its a stand alone thing?

Does 1.2 add new units and balance changes to the mod?

*SoraZ might be the best current worker of ModDB in this time. if i had an award i would probably given it to him/her*

Nope as Shockwave is considered complete in terms of adding new units but balance changes will be added along with a reworked General's Challenge as time goes on.

Yup, definitely no new units however in this case, they did add some but only to increase the balance between factions such as the Toxin Recoiless Rifleman among others (play the mod to find out).

Ooohh... as soon as I saw this, I had to download.

Tons of changes. It's good to see some stuff from ROTR placed in SW.

Where i can read changelog?

in the .txt file that comes with your download

I play two mod.One is ProjectRaptor anohter is Shockwave. Thank you for good job.

Everything gone to ****... lots of invisible(no, not stealth) units and instant victory(when just started) in skirmish maps against AI. Also glitchy map textures. Maybe it's just me so, I'll switch back to v1.1 for now till this one's fixed.

Thank you! I love your mod!

This team should collaborate with AEI (Advanced Ai Mod) to make the most kick-*** AI Shockwave has ever seen!

Umm. my mod does not have a uninstaller.

Guys thanks a ton for making these amazing mods, i really really enjoy playing this and rise of the reds, keep up the fantastic work!

How can I make skirmishes have unlimited money? That's how I like to play

THIS MOD IS THE BEST! KEEP IT UP! I saw that you guys went into the games of the past C&C's also, it's nice to see those in better conditions:)

no v1.1 better XD but when you fix oky

so can i use this mod or any mods if i have the first decade edition?

Please help i am running this on windows 10, whenever i start the game it just says this process canno acess the file because it is being usend on another aplication, i have the clean zh patched to 1.4 and it is cracked,also says you have encountered serius error.... please help me fix this problem

try to start it, "installed in frong folder" It actually says frong

I can't beat Dr.Thrax on this version, am I the one who can't beat him ? I'm currently using GLA(Kassad and Juhziz), cuz Deathstrike has helicopter to anticipate the Scourge(SCUD). Any tips?

Can anyone tell me if Deathstrike and Ironside have gotten their own challenges in this update?

Help it keeps saying I put the mod in the frong folder (nice spelling whoever made that error message) but I don't know how to fix it. It says to put it in the second folder if you got the game off origin but there is only one

Whenever I try to start it up, I get the serious error message. Is there any solution to this? I really want to play it

Is it stable during lan gaming? no sync mismatch?

Hey,Where can i make suggestions to add something new?If here,i would LOVE to have a patrol system in this mod.How should it work?Well,you should be able to set waypoints to all units in the game and they should walk from A to B to C(if you have multiple endings of a waypoint).And they should walk from A to B C and so on... infinetly.If you know and could add this it would be awesome.Thank you,
making my favoutite mod for ZH.Much much love :) No **** ;)

That's a great idea! If only they had put it in the base game. It has always been a wanted feature by my brother and I.

Hi! I've been playing ShockWave for a while now, but recently, out of the blue for no obvious reason, I've been receiving an error that doesn't allow me to open the game. A dialogue box opens titled "Technical Difficulties…" and says, "You have encountered a serious error."… and a paragraph of reasons as to why. This happens every single time I open ShockWave, and later happened to Rise of the Reds as well. Here's a link to the screenshot I took of it: Drive.google.com I hope someone can help me solve this error. Thanks!
-Caleb H.
P.S. I use ShockWave v1.2 in the Origin version of Generals on Windows 10, if that helps any. Thanks!

I fixed my problem. I just got rid of the Origin version of Generals and installed some Russian version instead that is a lot easier to mod.

This mod has the single most weirdest crash bug i ever saw, it literally starts flashing, the screen i mean, and i dont quickly Ctrl+alt+delete it, and stop the program, it shows me the damn blue screen and restarts my pc. i nearly shat myself the first time it happened, when it started flashing second time, i stoped the program with C+A+D. Does anyone else have this problem ,or is just me, because previous version had no such problems, and this one does that.

When I launched the Shockwave 1.2 Launcher, Norton deleted the file and show me that the file has a viruses Trojan!

china nuke doesnt fire his nukes for some reason