This is not just a compilation of the best mods for GTA San Andreas, it adds a lot of new features, improvements and new content to the game: textures, vehicles, peds, tuning options, weapons, clothes, tattoos, plants, sounds, scripts, special effects, maps, technical improvements, real world names, etc, etc...in spanish and english. It also features different themed mods and game modes: missions, freeroam, gangwars, assault (survival), superpowers, aliens, zombies, myths and misteries, races, stunts, etc.) Each themed mod in the California Megamod can have its own vehicles, peds, scripts, maps, etc.. And everything comes already installed in just one gta san andreas and ready to play with just a click. And in each release your gta san andreas becomes more and more realistic than ever.

This is my tribute to all GTA Modders out there. this is the most ambitious GTA project of all times that will allow you to have hundreds of Mods + several Medium Conversions + few Total Conversions in just 1 installation of GTA San Andreas, and be able to play any of them easily with just a double click. and all of the mods will have improved image quality. At the same time you still have the option to play without mods if you want, or install SAMP on it and play without mods.

I started this project in 2006 i think, i published versions 1.2, 1.4 and 1.5 later in 2008, and version 1.55 in 2009. In 2009 i also released CAMP MOD, a special mod that would let you play samp with mods.The mod only worked in the client side of samp, making samp look much more nicer, but without giving you any advantages against other samp players, (no cheating options, only an open door to a world of new entertaining posibilities) i also released a server with some gamemodes specially customized to take advantage of mods, making a lot more fun to play samp) but some days later the samp developers banned allmost all latin-american countries because a personal problem they had with a hacker from Argentina. And some time later they released another version not compatible with the megamod, and so my samp mod (Called Camp) became useless, so i deleted it from internet, and decided not to work again in mods for samp. i even quit making mods and started working in my own game (although the real reason was the shutting down of the megaupload server and so i didn't had a place where to upload the megamod because the files were too large and other servers gave very bad service).

In 2013 i found some comments in internet about people saying my work was very good and asking me to come back to work in gta mods, i also noticed a lot of good and new stuff had been published by talented gta modders for gta san andreas and that could be used to improve the Megamod project a lot. I downloaded some content and started writing my own scripts, but i kept focused in my own game. In 2014 i had a lot of realistic textures in my game and thought they would make GTA San Andreas look awesome, but i still had to make even more stuff but nobody will ever see it for years until i release my own game, so i "parked" my own game proyect and came back to work in the California Megamod, i published an update to 1.56 and 1.57, and worked in re-texturization of san andreas and improvements to the megamod using new available content in gta websites, i worked everyday in 2014 in the megamod, and i had plans for version 1.6 and 1.8 in 2014 but they got delayed and never released, finally in 4th january 2015 i decided to publish version 2.0 (in my website) using new technology created by LINK2012 (modloader) replacing the one i had created in previous versions. Later i published some small patches/updates and i'm still working in improving the california megamod project. wishing to finish it this year 2016 so that i can go back to work in my own game (which still has no name but looks REAAAAALLY NICE but still needs years of work). In december 2015 i wanted to publish the latest version of the megamod that i had in my computer eventhough i haven't been working in it for months and it wasn't finished yet, i spend few weeks testing and fixing the most important bugs and i tried to publish it for my birthday but it got delayed and then i published it 2 days later. In 1st january 2016 i published version 3.0 of California Megamod, with some improvements, bugfixes and new content from 2.1. in May 2016 i published version 3.1, a beta of version 3.2 was uploaded to diskokosmiko in october 2016 and version 3.3 was published in 1st january 2017.

The megamod still needs some more work to fix some details here and there, but i can not promess you anything, maybe you will get some updates in 2017 but later i dont know. It will depend on my freetime, my future motivations and also it will depend on the reaction of the people, if i see enough downloads and interest of people in the project then i will continue improving it, but today most people plays GTA IV and V. Although latest improvements in the megamod makes the game looks really nice and have some GTA-V-LIKE feelings, the truth is that today GTA San Andreas is an old game from 2005 which is losing players as time goes by, and even we all grow older too, we are not kids anymore and we have a life to live.

¿There may be a multiplayer mod in a future version of the california megamod? maybe yes, maybe not, all i can say is that i have in my hard drive some unedited HD videos recorded in 2015 while playing SAMP in a random server with a special modified experimental version with only the base and crime wars mod from version 2.1 installed, it looks really nice with the latest textures, peds, vehicles, sky colors, particle effects, etc. but it was just an experiment, a one-day-random-test, a diagnostic of the situation, to see what needs to be done in this direction. Maybe the megamod will need to be RE-DONE AGAIN to fix a lot of compatibility issues between samp and all other mods, specially with cleo mods that are enemies of samp and would need to be switched off when playing samp. 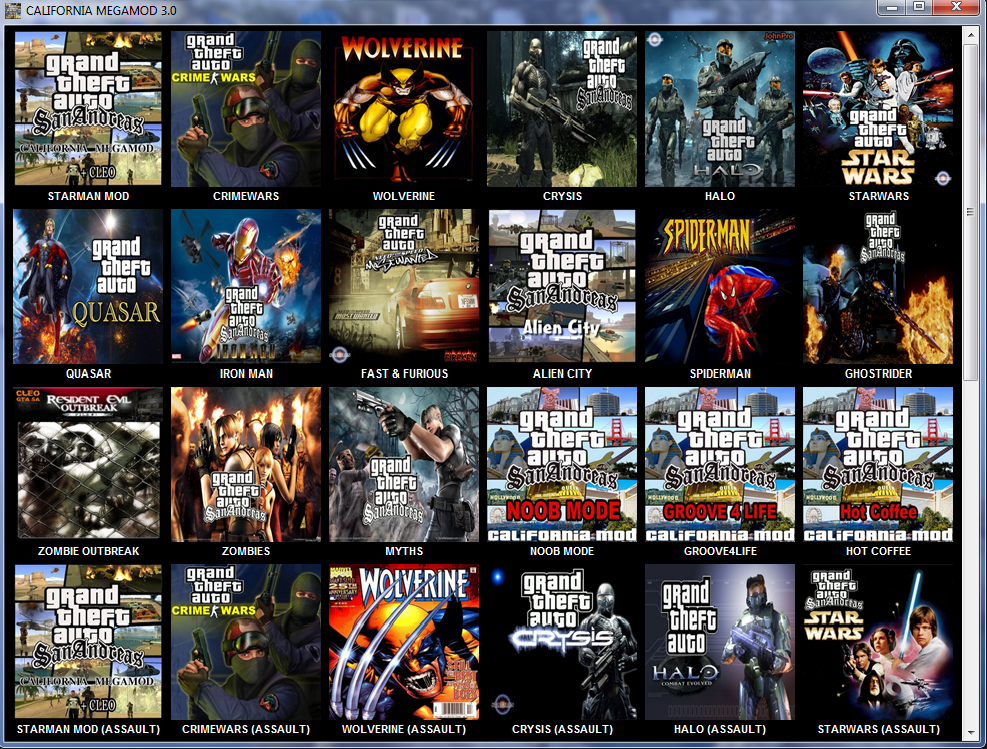 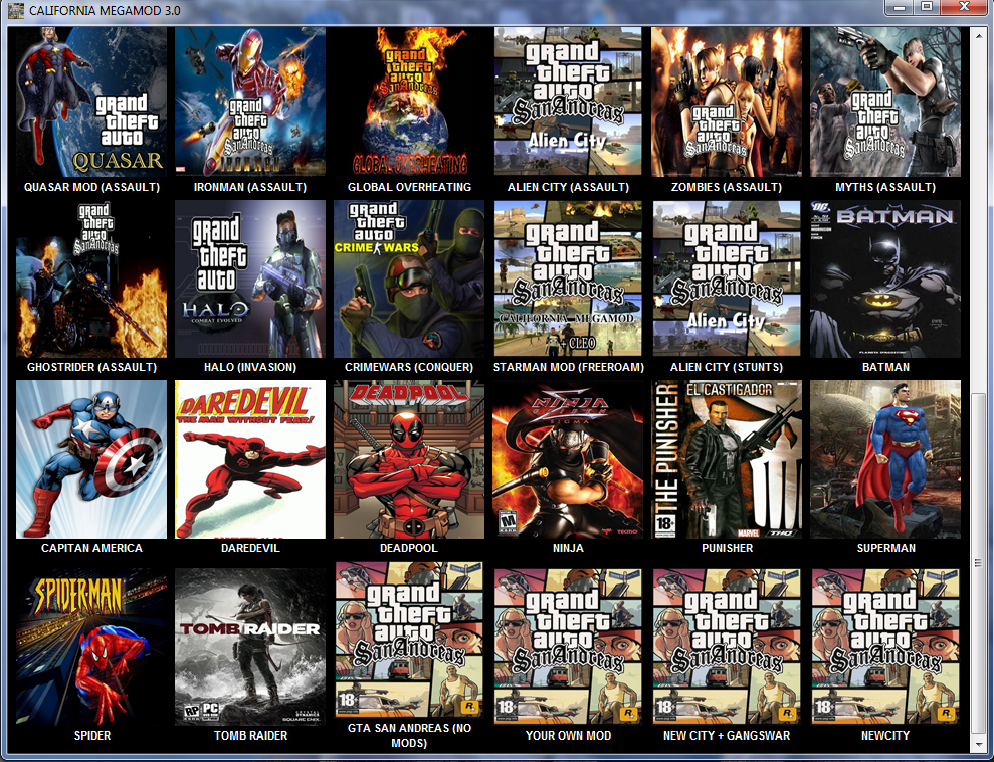 FIX FOR GAME CRASHING AFTER LOADING A SAVED GAME

i finally solved the mistery of some saved games crashing the game in California Megamod 3.3. When you save a game, Cleo 4.3 also saves a file inside CLEO/CLEO_SAVES, and this is the cause of the trouble. when you load a saved game and you get out of the House, game crashes if there is a file with same slot number inside CLEO_SAVES folder, if not then the game works fine. (sometimes game crashes during loading process).

HOW TO FIX YOUR CURRENTLY SAVED GAMES (TEMPORAL FIX)

1- Just get inside CALIFORNIA MEGAMOD 3.3/CLEO/CLEO_SAVES/ folder and delete all files inside CLEO_SAVES folder, now all your saved games are fixed and will work without crashes. but you still need to install a patch to avoid this happening again when saving a new saved game

HOW TO FIX THIS PROBLEM FOREVER:

(this patch includes a new fixed CLEO folder, but you must delete the old one or else the patch will not work because the files that are causing the troubles will remain there)

CALIFORNIA MEGAMOD 3.3 RELEASED ON 5TH JANUARY 2017, here are the download links, installation instructions, and description of some features. Enjoy and...

Version 3.0 of California Megamod has been released in 1st January 2016 you can Download it from the official website mods-gta.blogspot.com (and also...

Version 2.0 of California Megamod has been published in the official website (mods-gta.blogspot.com) in january 4th 2015.

installs only PART 7 of california megamod 3.3 (there are 7 parts, so this is the last one). This file installs AUDIO/SFX folder into California Megamod...

installs only PART 6 of california megamod 3.3 (there are 7 parts). This file installs new versions of AUDIO/STREAMS and AUDIO/CONFIG folders into California...

installs only PART 5 of california megamod 3.3, they are 7 parts (though the last 2 files are just the audio folder and can be skipped if you get a full...

installs only PART 4 of california megamod 3.3, they are 7 parts.(though the last 2 files are just the audio folder and can be skipped if you get a full...

installs only PART 3 of california megamod 3.3, they are 7 parts.(though the last 2 files are just the audio folder and can be skipped if you get a full...

where is colombian cartel skin,
where at?

Is the AMERICA EXPANSION included in the 3.3 version or is that some different mod i mixed up on dvd ?

hello, the mod is very good but I have a problem that I hope you have solution I put some way like starman or zombies or anyone comes out of nowhere or hangs in a cinematica and if there is a solution please tell me that I would love to enjoy this great mod

When the game is loaded, it will exit