Broken Crescent is a M2TW total conversion modification centered on the Middle East starting from 1174 and concluding in 1300. Featuring a gorgeous new campaign map spanning from Anatolia to India, Broken Crescent allows you to take control of over 18 brand new factions all complete with over 300 new artistically crafted warriors ready to do you bidding!

Hello everyone, just wanted to assure everyone that the Dar-Al-Harb Project is alive and well. I have been working for many months on the newest version 1.2 "Tip of the Spear" a vast content update that among other things rebalances horse archers, foot archers, cavalry and spearmen, as well as new maps, units and historical battles.

Alani Swordsmen are an AOR unit available in the Northern Caucasus for Georgia exclusively. A more aggressive attack focused unit, they sport high attack and charge values but lower then average defense for their price. 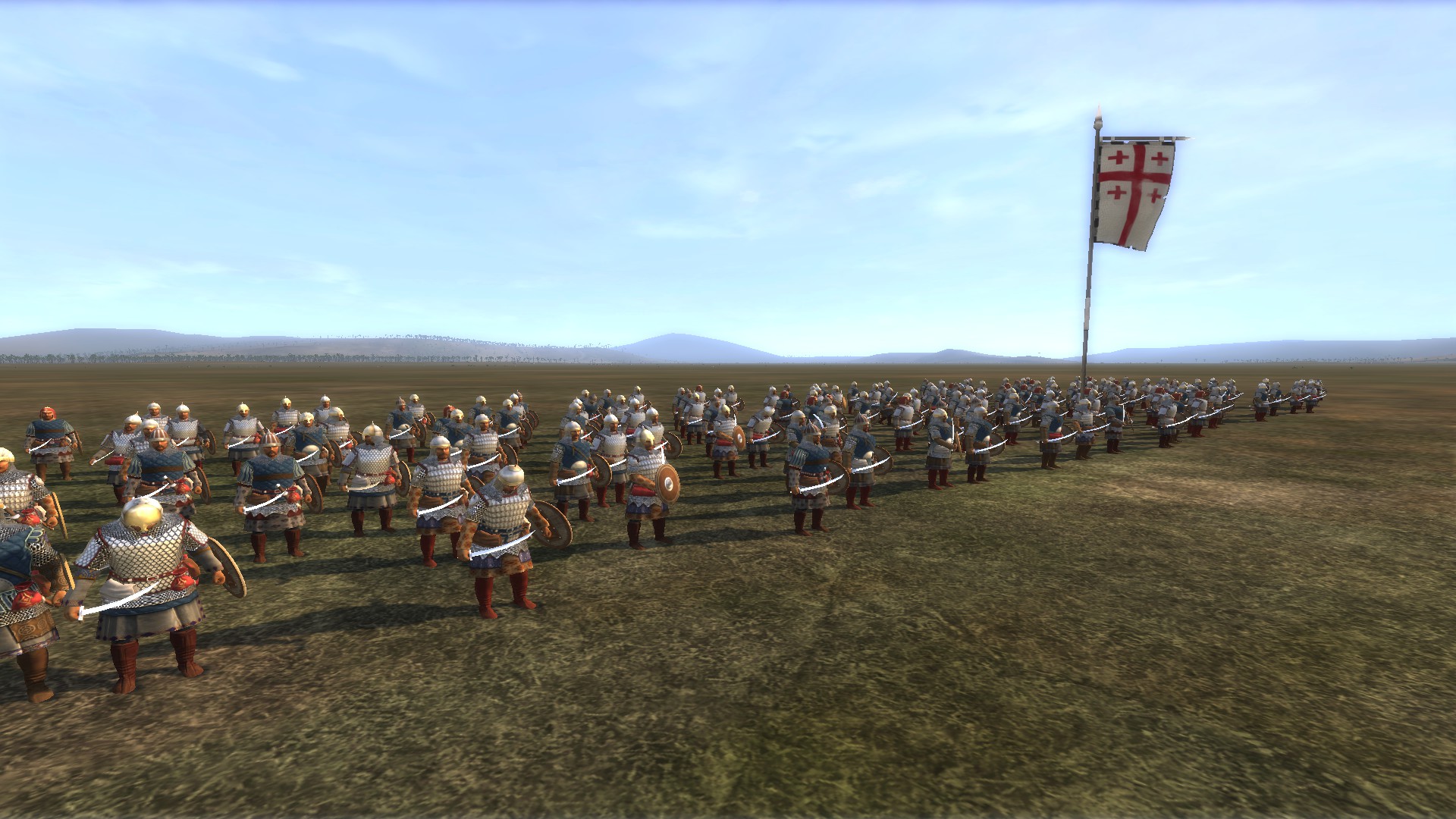 Volga Pikemen for Volga Bulgaria, a low tier pike unit for the Bulgars of the Volga. Recruited in city barracks chain. Stats are not current and have been changed. 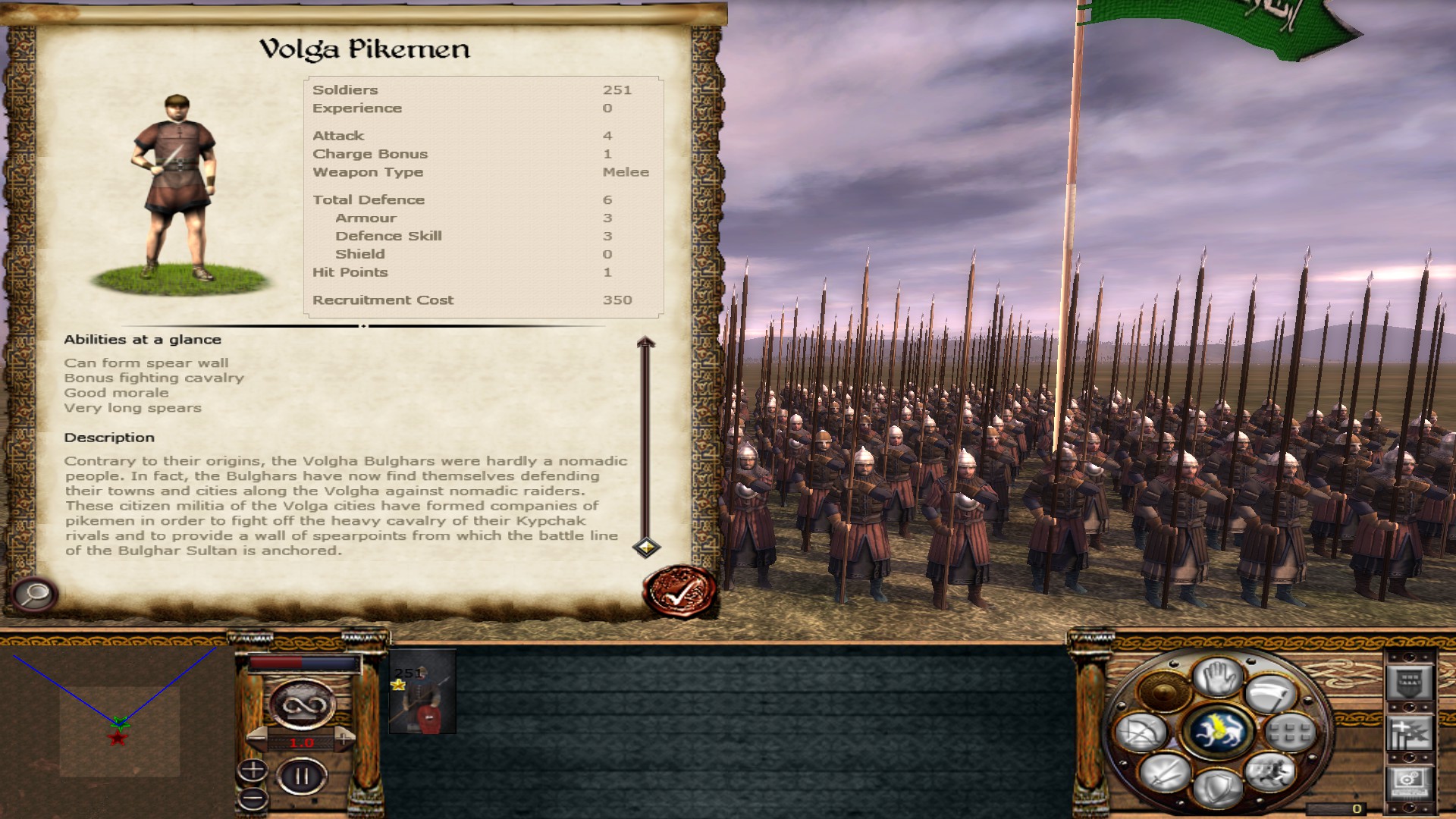 Rostov Retainers, an elite Sword unit for Vladimir Suzdal (Thanks to the Rusichi 2 Team for the model used, though the textures are new) 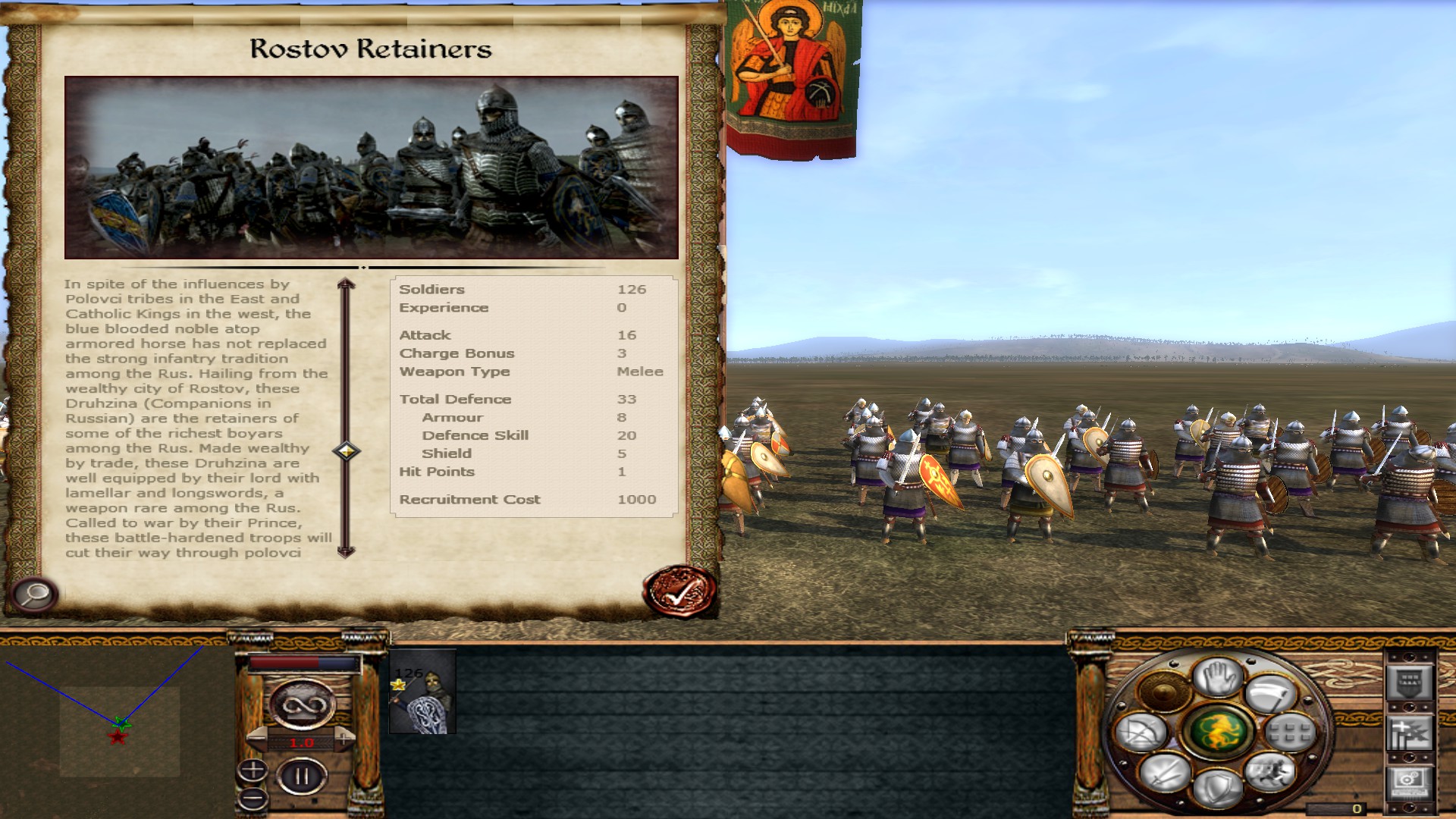 I have added four other units to Vladimir to pad out their roster, but they are models that existed in the Broken Crescent files already and were from Rusichi Total war, so nothing new on that front.

In other news, to give you an idea of balancing changes in general, 250 man archers under 400 gold now do 4 missile damage and 775+ gold foot archers do 6 missile damage. A similar thing has been done to lower tier Horse archers under 550 where their damage has been reduced, and 82 and 75 Man (huge scale) elite Horse archers now do 6 missile damage. Crossbowmen have received nerfs and low tier crossbows now get butchered in a skirmish with archers, but still do massive damage to infantry. Cavalry mass has been decreased, infantry mass increased, and all Spearmen now have a bonus versus large of 12, and all spearmen have had their price reduced by about 100 gold! This means cavalry will get mulched often by much cheaper spear infantry, and that spearmen now have an actual purpose in the mod. This is far from an exhaustive list and I made many more changes, but this is just the basics.

In addition, several historical battles have been added:

After I fix some bugs, I hope to release Dar Al Harb 1.2 "Tip of the Spear" soon!

I'm not member of the mod team, but I think this release deserves its own announcement here. So, here is Broken Crescent v2.4

A mod focused on balancing both multiplayer and campaign battles within Broken Crescent. Among other things, the mod adds unit caps based on unit quality/Cost/Faction...

This is full new Broken Crescent v2.4. I'm not member of the team, I just thought it might be good to upload a mirror here at ModDB. All credits goes...

there is no 1.2 version of this addon get out? and no hope to get it right? im so sad.

cccpclaudiu I'm not sure if the region limit of 199 has already been reached, it probably has, but if not you can download geomod, it's pretty simple to add new regions, removing any regions may cause a CTD if it's referenced by the campaign script, also make sure to back up the data/maps and data/text folders because sometimes geomod can crash and mess up files.
Also the map can not be more than 510? pixels wide, it probably already is so expanding the map may be out of the question, not sure though. Good luck!

whats with historical battles? they all are unplayable and wrong named but description says mod contains them

This mod is amazing. Best mod I've seen so far for Medieval 2, waayy better than something like Stainless Steel. The historical accuracy, time and love put into this is astonishing. I had 400 or so hours clocked into Medieval 2 before I started playing this mod, this mod made me clock in over 200 more.

Great models, battle AI fixes, campaign AI diplomacy tweaks, not to mention the map is soo perfect.
I only had it crash once in over 200 hours, which just made the experience so much better. Literally the perfect mod. The only issue is that its not finished yet but thats totally ok.