Blitzkrieg II is a World War 2 total conversion for Command and Conquer: Generals. You can fight as the Allies(with America, UK and France as subsides), Axis(with Tank, Rocket and Jet research tree's) or the Soviets(with Tank and Homeland Defence subsides). Not only do we have all new units, models and sides...but all new maps and gameplay. No longer do you just collect supply piles. In Blitzkrieg II you have to secure your holdings in towns to ensure a steady flow of money. We have also given point requirements for most of our units. Meaning, when you start out a game...you can only build infantry and light vehicles. As you kill enemy troops, you can unlock heavier tanks and planes.

The British get some love!

We will gradually show more goodies, but for now, we will stick with the flying stuff.

Release 2.7 will feature 14 brand new planes, with 4 bombers, 6 fighters, 1 ground attack and 3 support planes, and 3 of them are jetpowered.

We will start by showing the new toys of the United Kingdom! 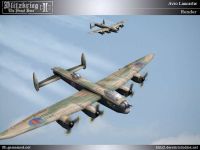 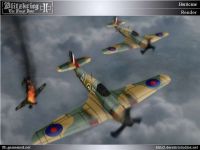 The new bomber, the Avro Lancaster & the new fighter, the Hurricane.

The Hurricane will be the new starting aircraft for the Allies (and, brush up your French, you are starting as France now when playing with the Allies!) and the Avro Lancaster will replace the B17 and B29 with normal bombs, Tall Boys and Grand Slams!

Status of the Mod as of Sept 2nd

Work on Blitzkrieg 2 is progressing at a steady pace, although lately it has slowed down a bit. Most of my time has been spent on helping design and set...

There have been a good deal of updates regarding Blitzkrieg 2 the past few days. First up is the announcement of Blitzkrieg 3: Fortress Europe, which...

Yesterday we released the latest patch for Blitzkrieg 2, v038. This fixes many of the bugs found in the previous version as well as does some other small...

Blitzkrieg 2, v037 patch has been released. You have 2 options of getting it. The first (and easiest) way is to just load up v035. You should be asked...

And Ive been with Moddb for at least 10 years Im not new!! ggrrrrrr

How are you supposed to play this mod when the feckin Ai gives up after five minutes? arrrrgh

this happens on EASY ai. and usually ai gives up after ten minutes as well in CNC ganmes.

Moddb.com it's for zero hour and i've got it :D

please tell me the steps...

hope they do something...

For anyone who still comes here, This mod Has merged with The Finest Hour, some years ago. It may sound strange, but I think they didn't realize they had 2 separate ModDB pages, or IIRC, the developers of the 2 combined because the 2 were so similar and joint work began, anyways you can find the real page here Moddb.com

Sorry for the confusion.