Battlefield Heroes 42 is a conversion Mod of the famous Cartoon Shooter Battlefield Heroes. It is made by "Apache Thunder". He finished it at summer 2014. As a special feature, it still built purely "Avatar Star" in BF Heroes 42 Mod, because it fit so well together.

After the Free to Play shut down of the Battlefield Heroes Server's on the side of Electronic Arts (EA) during this summer, you cannot play Battlefield Heroes anymore, because it was a multplayer only game. There are fortunately some mod coder, what save the game as free mod for the game Battlefield 1942. This Battlefield Heroes '42 to mod is ported 2010 and created by "Apache Thunder". He develops this mod till the summer of 2014. But this mod is not only a portation from Battlefield Heroes to Battlefield 1942. This mod contains 35 Maps, it have got whereof certain a playable snow, night or rain alternative. One of the Special is the legendary "Lunar Landing" map, there you are as player on the moon. It has some content, what you only find in BF Heroes '42. For example the "Avatar Star" maps, El Alamein Night, moveable ship and Helicopter support and many more.

You can play this mod not only Multiplay, it contains also a Singleplayer and COOP mode Support (Play versus CPU enemy online) too.

The second part of this news is about the invite to the BF:HEROES '42 LAUNCH EVENT! 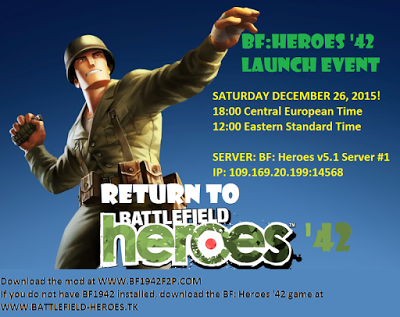 What the hell is Battlefield Heroes '42? Watch the movie:

of page) BFH developed for this Event by "King Tut"? Looks like you need this kind of BF Heroes '42 mod to join the event only!

which will show our server in the list..
-You can download our QUICK JOIN Patch at ..... (available before December 23)

SECOND WAY
DOWNLOAD THIS, BUT NO WARRENTY THIS WORKS FOR THE EVENT!
I don't know is it the same Version of this kind of BF Heroes '42 v5.1:
(Download at hg-clan.blogspot.com But this is the original BF Heroes '42 game, created and developed by "Apache Thunder"!

YOU WANT TO SUPPORT THE PROMOTER OF THIS EVENT AND SERVER HOSTER?

Please note that the website only releases the entire contents on December 23.
So will take is still less than two days before you can download the mod from the site.
In addition, there will be a play button on the Web page named "play the game"!
In how far this will work will soon show?
Be there and making this event the complete success!
Because it makes the difference, everything you need to be doing, is in the news linked!

Hey. Where the link to download the mod? Not working.

Hope this archived link works also how big is the archive? Thanks to the Internet Archive Wayback Machine. :)
Web.archive.org linked from this page: Web.archive.org

The mod crashes when I start any map :( I have also tried downloading the 5.0 version and a 4.something version, both didn't work without any issues. Do you have any idea what could solve this?

For all you guys wanting BFHeroes back, theres a new BFHeroes like game comming from the fans of BFH on steam end this year or begin next year, i hope you all support it Renegadeline.com

I can play just by downloading this file?
Hg-clan.blogspot.de

Mmh, i dont have this problem, but i think in that same way. This Website is not of the most trustfull one.

I have removed the links from.

Possible could be, anyone had hack that website.
The Second one is trustfull. I testing the links. This one where you have trouble i dont trust at normally.

When i open the Battlefield Heroes online shortcut, i joining server and it failed to connect is the server offline or something? if so is their a way to bring it back. Thanks For memories :D

We need a Server, which upload the Mod. The BFH 42 server was only for a couple of weeks online, after then i dont could join anymore too. If do you cannot play online, you can play it in COOP Mode or SP. Because "Apache Thunder" the creator made it for it.

Cool but the quality is so bad

I dont think so. Its made for BF 1942. Its not a one on one copy. Thats not possible, because you have all the lock Customs. But you can enjoy it now in the BF 1942 atmosphere. That brings me back the good memories of BF Heroes 42. It was a funny game. In BF 1942 it lives again as mod, to save this good made shooter.