The goal of this project is to fix as many bugs or mistakes within SWBF2 as possible. I hate to call this an unofficial patch, but that's pretty much what I'm going for. However, this is not a remaster project and may not work with certain aspects of Harrisonfog's Remaster Project or Anakin's Remastered Menus. Feel free to report any vanilla bugs you're aware of in the comments. I'm not great with scripting, and I can't even run ZeroEditor, but I can usually correct sound or visual problems with ease. Hopefully there are others who see value in this sort of thing, but if not... oh well.

If you play the classic Battlefront II at any kind of modern resolution, you've certainly noticed the awful HUD and tiny fonts. For the longest time, the best solution was simply to play at a really low resolution, like 800x600 or 1024x768. However, one of the lesser-known features of SleepKiller's Shader Patch is improved resolution/DPI scaling. The only downsides of this feature are its incompatibility (kind of) with Anakin's remastered menus and its preservation of the 4:3 aspect ratio. That is to say, the game will run at whatever resolution you want, but at a 'stretched' 4:3 aspect ratio. This could actually be seen as an advantage if you play competitively, because of the larger hitboxes, but some people might be turned off by it. 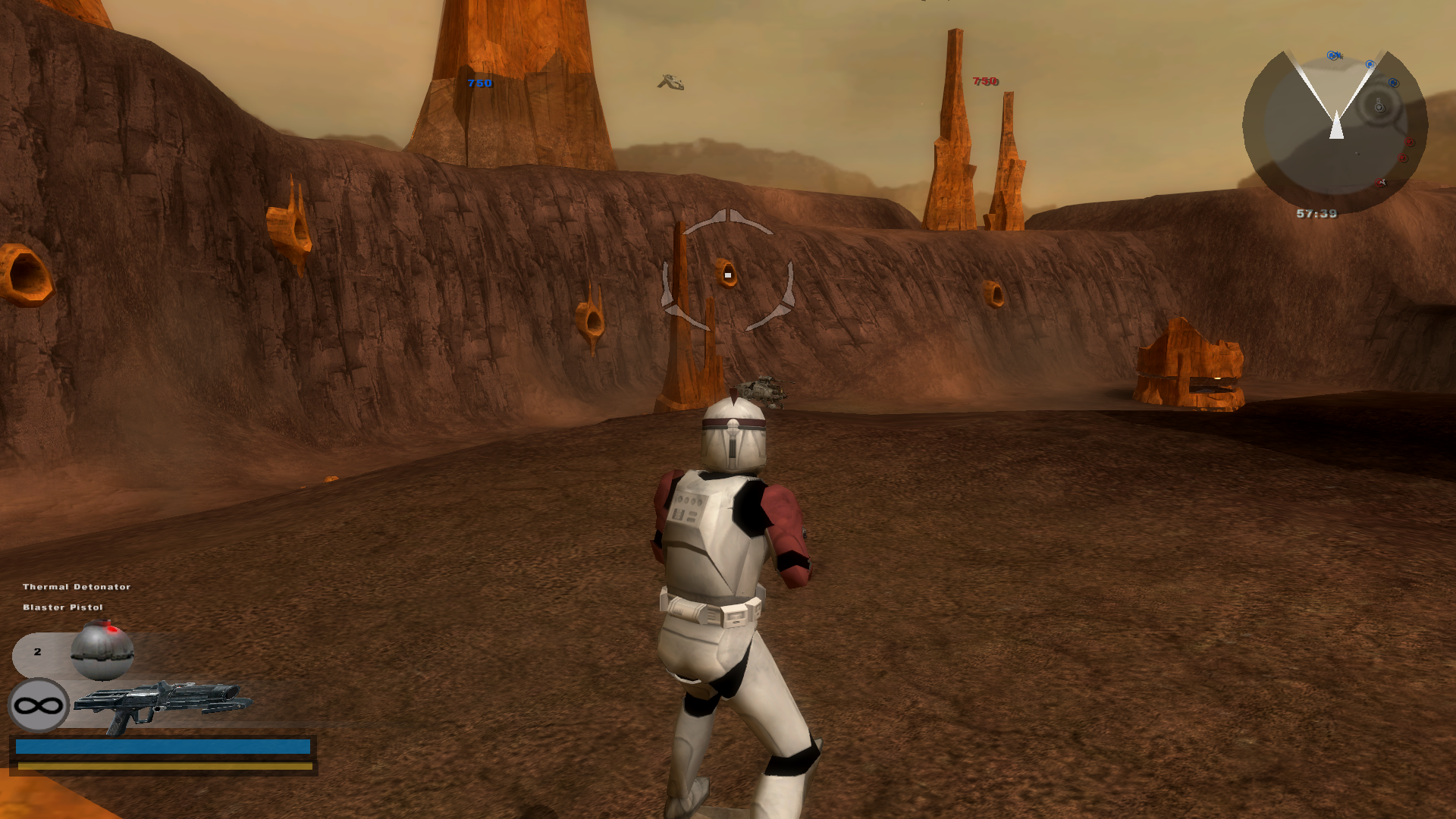 And now with Shader Patch's resolution/DPI scaling (and also my HUD): 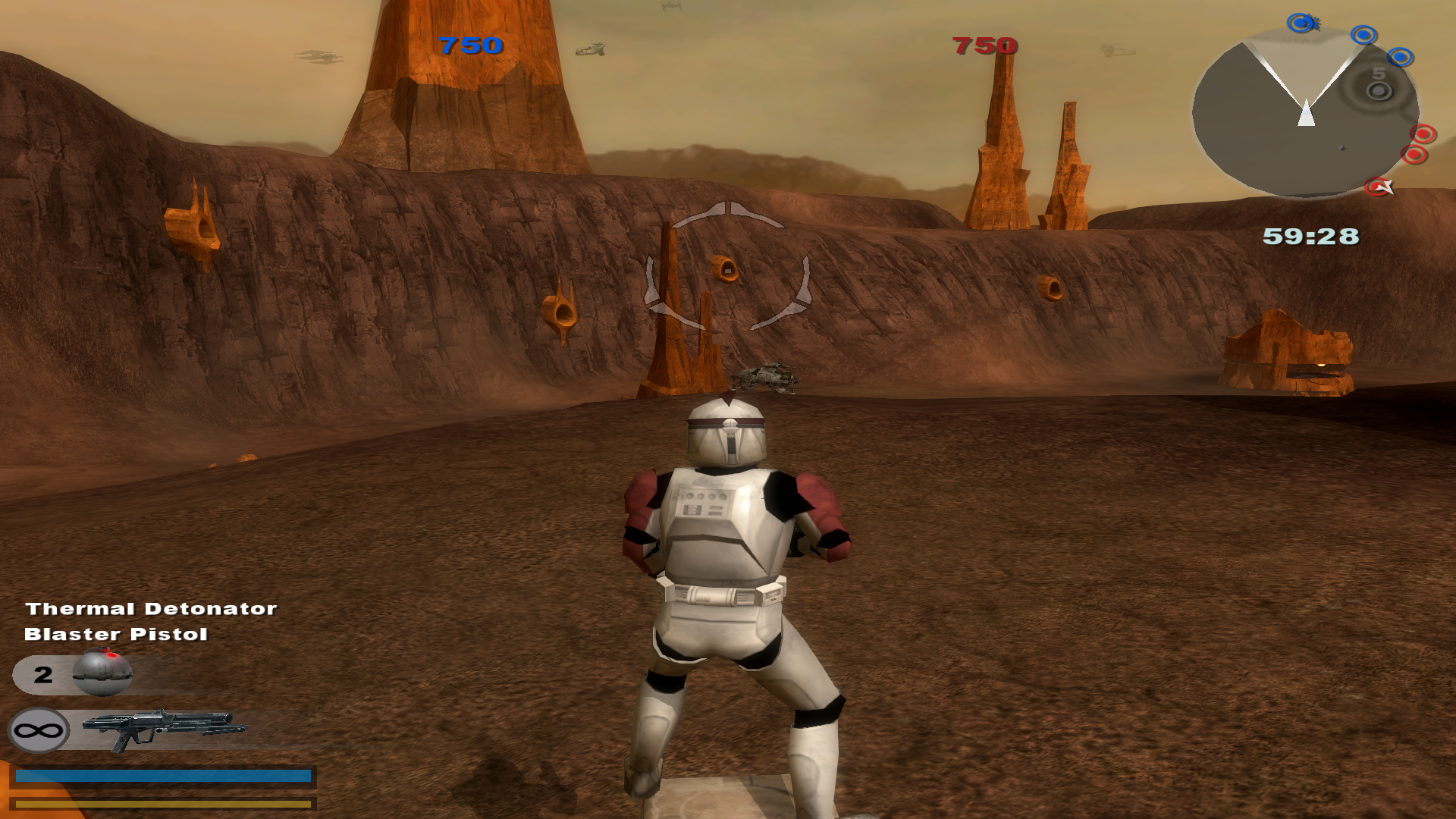 To install Shader Patch, simply grab the latest release here and run the installer. Obviously, it isn't compatible with other graphics mods like Reshade. There are a couple things you should do before installation, though. Make sure your in-game resolution is the same as your monitor's native resolution and also make sure light bloom is enabled, as this is how Shader Patch 'hooks' into the game. Bloom can be disabled via Shader Patch's interface after installation, if you prefer not to use it. And finally, if you don't feel like messing around with Shader Patch's many settings, you can use my config. Just move the two files to your GameData folder after installing Shader Patch and overwrite when asked.

For some reason, Pandemic created atrocious new ground textures for the PC version of Mos Eisley. Fortunately, I was able to hex-edit the textures from...

The shipped Geonosis map is pretty awful. Literally every change made from the earlier Xbox/PS2 versions was a step backwards.

Pretty much the stock sides, but with a few annoying issues fixed.

Fixes the ugly, inconsistent light bloom on Polis Massa. You MUST install SleepKiller's shaders for this mod to work.

Fixes the low-res geometry which incorrectly appears in the middle of the center platform. Thanks to Nedarb7 for developing the fix and uploading it to...

Evidently, someone at Pandemic decided to add bright turquoise water to the PC version of Kashyyyk, replacing the natural grayish-blue water found in...

I have been playing this game wrong until I used the shader patch and your HUD! Thanks so much for the work you've put in to making this game better!

would it be possible to add back in the old hangar colors from game cutscenes?

I wish >.< but sadly, that's beyond me. A guy called Ansem was able to port space maps from pre-release versions of the game, though, which you can see here: Youtube.com

Will you ever try and add back the old font from the console editions? I much prefer those.

I prefer that font too lol. I've tried to port it, but unfortunately haven't had any luck.

You are so awesome my pp bb smol

Just a quick heads-up: the Mos Eisley & Kashyyyk fixes, as well as the PS2 Sprinting animations, are not included on this mod page as of the time of writing. Thank you for everything you've done and are doing, some of your work should be considered essential for any player, and the extras are just as good!

You're right o.o thanks. I won't link the PS2 sprinting animations here, since they cause a crash for a lot of people, but I will update my 'Larger Spawn Button' file so that it includes an improved HUD for those who use old-school 4:3 resolutions. I'll also remove the version which includes the PS2 animations, at least until I know what's causing it to crash.