In the year 2281, Leo Henriksen, the son of DinoHunt Corp founder Elias Henriksen and the newly crowned COO of DinoHunt Corp., has launched an exclusive private hunting tour run deep in the southern Australis Sector of FMM UV-32. You are one of the lucky elite clients that has been invited to participate in the tour, which brings to the table exotic new species and, most importantly, the promise of the opportunity to hunt the planet's ultimate predator in the land down under. Can't you hear the thunder?

Antipodes: A brief history and its current status

As 2019 draws to a close, so too does the first year of work on Antipodes. It's been a year of highs and lows, with development at times stopping completely due to one reason or another, but it's been a year of work that I think I can look back on and be proud of. 26 models in total, 11 of which were scrapped, dozens of skins, as well as work for a separate project. After what I see as a bit of a landmark in this mod's development, I thought it would be a good time to shed a bit more light on the mod's history, its current state, and what the future may hold for it. 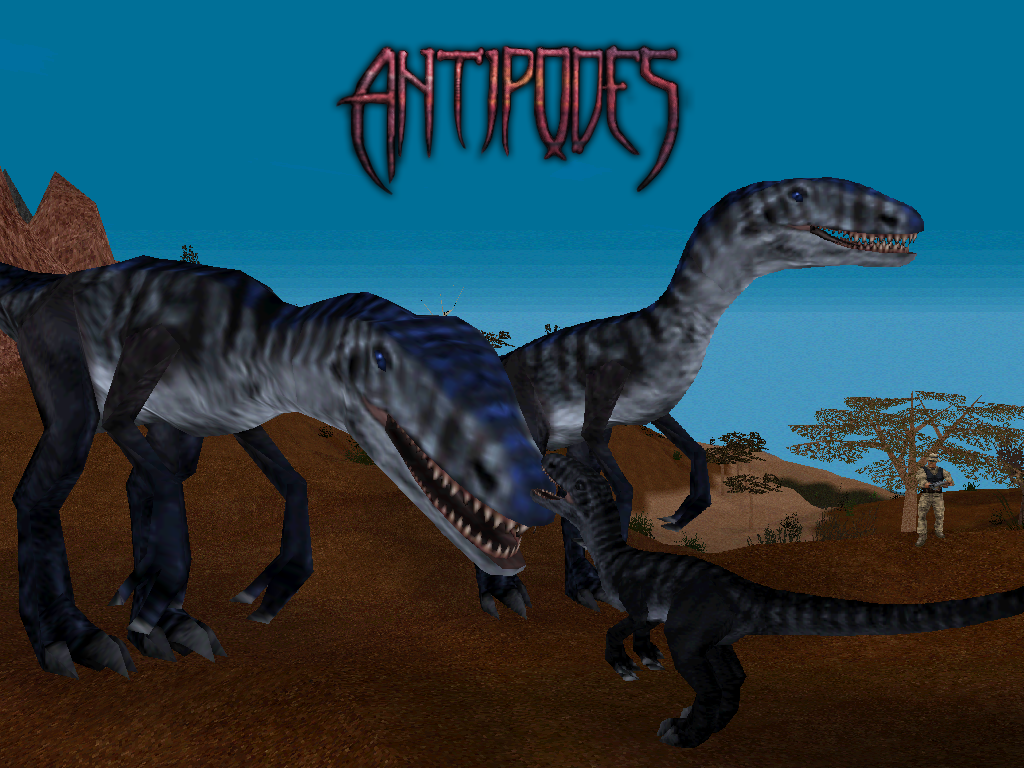 The Road to Now

Antipodes, or at least the general concept behind it, came to be sometime around the end of 2016 in the form of Carnivores: The Jungle, a rather amateurish attempt at what was meant to be a prequel to the Carnivores games we know and love. Its development went testicular in early 2018 due to needless drama caused in large part by my own arrogance, but that's a stone best left unturned. Antipodes in its present form came to be later that year, and after a year of sporadic development broken up by personal issues and technical difficulties, we come to the point that we're at right now.

The Status of Antipodes

Over the course of development, ModDB sort of took a backseat in my priorities with the mod, and as such my responses to questions were curt and dickish, something I do apologize for. To those wondering about the roster of the mod, wonder no more.

As of today, 15 out of the 23 weapons and animals are modeled, although none of the maps have been made. The models yet to be done are Aussiedraco, Antarctanax, Leaellynasaura, Diamantinasaurus, Muttaburrasaurus, the Dschungelgewehr, the LFD, and the Carbon, although there may be more if I decide to make some DLC. I've also yet to settle on a general menu color scheme and theme, but that shouldn't be too hard so it's not a high priority.

Ideally, I'd like to get at least a Beta 1 release out by the end of next year, but I've learned my lesson and I'm making no promises this time. If a Beta 1 release is achieved, don't expect all of the above content to be included. After Beta 1 is released my focus will probably shift to fine tuning the mod and making sure everything is as good as it can be, along with focusing on my other project(s) that I have coming.

That should be about it for updates; I'm still trying to get stuff done as often as I can but between life, Tenebrae, and another project I have yet to officially announce, time for Antipodes is a little strained. Hopefully I'll have some good stuff to show in the future, but for now this is where I'm at.

when will it be complete
from dino107(you knowwho)

not really, just working on stuff until it's at a point where i'm happy with releasing it. the roster has seriously grown over the past year so there is a lot of work to be done still. it might be another year or so depending on how things go.

When the time comes this'll definitely get my vote for MOTY. ;3

i appreciate it but you might be waiting a while

Ok but why though?
MOTY Voting usually happens in December.