In this Christmas release, all units are reverted back to V2, but all other features are kept. New Features include Nomadic Culture, New traits, features from Vanilla Balance Mod, and 46 units given to other factions, complete with reskins, sprites and UI cards!

It has been awhile since a release, but if you have not been following, a lot has changed. In this version, all of the units that had been previously made are not included. Don't worry, eventually most of them will make it back in, and they are still available for download here if you want them.

This version seeks to pick up from where I left off in Version 2 but also retaining all of the features that were included in versions 3-7, except Barbarians getting 5 tiers of recruitment.

Here is what is included in v8.

This was ported straight from Barbarian Invasion, including all of the traits and ancillaries that made sense for this time frame. It was given to Scythia only, and includes a new rebel banner, new city models for the map, and new portraits.

The Four Tiers of Nomadic Settlements

Some of the New Nomad Portraits

This mod is located on totalwar.org and I have taken most of it's features and added them to v8.

LANDBRIDGES
New land bridges - narrow stretches of water which can be passed by both ships and armies - have been added to the campaign map to compensate for the poor Naval invasion AI, and to promote the growth of realistic-looking empires that straddle bodies of water. The new landbridges are:
* Strait of Gibraltar, between Baetica and Mauretania.
* Strait of Messina, between Sicilia Romanus and Bruttium.
* Hellespont, between Propontis and Phrygia
* Dardanelles, between Propontis and Bithynia.
You can now expect to see empires that take in both Greece and Asia Minor, while Carthage sometimes invades southern Italy from Sicily if the Scipii are defeated.

* The game no longer revolves entirely around Rome, so factions' victory goals are individually tailored to their likely real-life ambitions. Whilst every faction must still conquer 50 provinces, the specific territories that must be included in those 50 now vary from faction to faction. For example the Spanish must conquer 50 provinces while ensuring that their empire includes Baetica, Taranonenis, Hispania and Celtiberia. Victory goals for the Roman families, the Gauls, the Germans and Carthage still include conquering Rome. The Successor kingdoms represented in the game - Macedonia, the Seleucid Empire and Egypt - share the goal of reuniting Alexander's empire by taking Pella, Antioch, Seleucia and Alexandria.

* Completed text for victory and defeat screens for every faction. No more lame generic "You have won, all your people celebrate" text when playing as Numidia, Dacia etc., the victory text for these is now just as specific and stirring as for the main factions!

* Capital of the province of Macedonia is now Pella, not Thessalonica

* There is a bonus cheat/feature, enabling the "perfect spy". This allows the player to see details of army composition and city details as if you had a spy right next to them, no matter how far away they are. To activate, press F1 while on the campaign map to bring up the keyboard shortcuts scroll. Click on the question mark and when the advisor appears, click the "show me how" button to activate the script. You can deactivate it at any time by repeating this process. For best results, use with the fog of war off.

* There is a bonus cheat/feature, enabling the "perfect spy". This allows the player to see details of army composition and city details as if you had a spy right next to them, no matter how far away they are. To activate, press F1 while on the campaign map to bring up the keyboard shortcuts scroll. Click on the question mark and when the advisor appears, click the "show me how" button to activate the script. You can deactivate it at any time by repeating this process. For best results, use with the fog of war off.

* The range of names for women in the Pontic, Armenian and Thracian factions has been increased to reduce the problem of repetitive family names. In pure vanilla it has been known for a general from one of these cultures to have a wife and three daughters all with the same name! Thrace and Pontus have gained some carefully-selected and appropriate names from the Macedonian list, while Armenia has received a small number of names from the Parthian list. These are culturally appropriate and historically justifiable (at least no less historic than pure Vanilla).

* All factions now have a public order bonus attached to the Government building in any settlement, ranging from 5% for a Governor's House to 25% for an Imperial Palace.

FACTION REBALANCING
* Summary: Various factions have been strengthened and weakened by having their starting denarii, starting provinces, armies, and sometimes units tweaked. This has been pretty successful in generating a balanced campaign. Carthage, the Gauls, the Germans and the Seleucids - the four big losers under pure vanilla - now usually survive to 200BC at least, and will expand to powerful empires in 30-50% of campaigns.

Britons
* Eburacum & Deva are now ruled by rebel Britannic tribes at the start of the game. (ahowl11's version)

Roman Families
* Praetorian Guard now only recruitable in Rome, reducing the unrealistic Praetorian-dominated armies often seen in late game. (ahowl11's Version)
* First Cohorts can now be recruited in each Roman family's starting capital, as well as Rome. Early Legionary Fist Cohorts can be trained at an Army Barracks and Legionary First Cohorts at an Urban Barracks in Arretium, Capua, Rome and Tarentum.

Pontus
* Scythed Chariots can now be recruited only from a level 2 smith and above instead of level 1.
* Pontus can now build sewers and paved roads.

Seleucid Empire
* Starting denarii slightly increased
* Sidon gained from Egypt with modest garrison
* Some other starting garrisons increased, with a unit of cataphracts in Hatra (most nations get a "bonus late military unit" which they can't recuit, the Seleucids originally didn't).
* Better walls around Antioch and Hatra
* Scythed Chariots can now be recruited only from a level 2 smith and above instead of level 1
* In one of the most successful bits of modding, removed the river crossing from the river between Armenia and Assyria, ending the Armenians' manic obsession with Hatra and greatly improving the chances of the Seleucids surviving the first 50 years.

Egypt
* Shrines removed from all cities to make presence of garrison more necessary at start of game
* Sidon lost to Seleucid Empire
* Base farming levels of Nile provinces very slightly reduced. They still collectively constitute the world's most fertile region though.

Rebels
* Garrisons of Petra, Bostra, Ancyra, Nicomedia and Apollonia increased, within reason, along with a small Judean Army near Jerusalem.

EVENTS
Quite a few of the historical events found in the campaign don't actually happen as no date had been set for them. With a bit of historical research to find out when they happened, they are now back in the game. Look out for espionage in carthage and the completion of the great library at Alexandria. These have no effect on gameplay, they just restore a little flavour that CA put in and then took out for some reason. 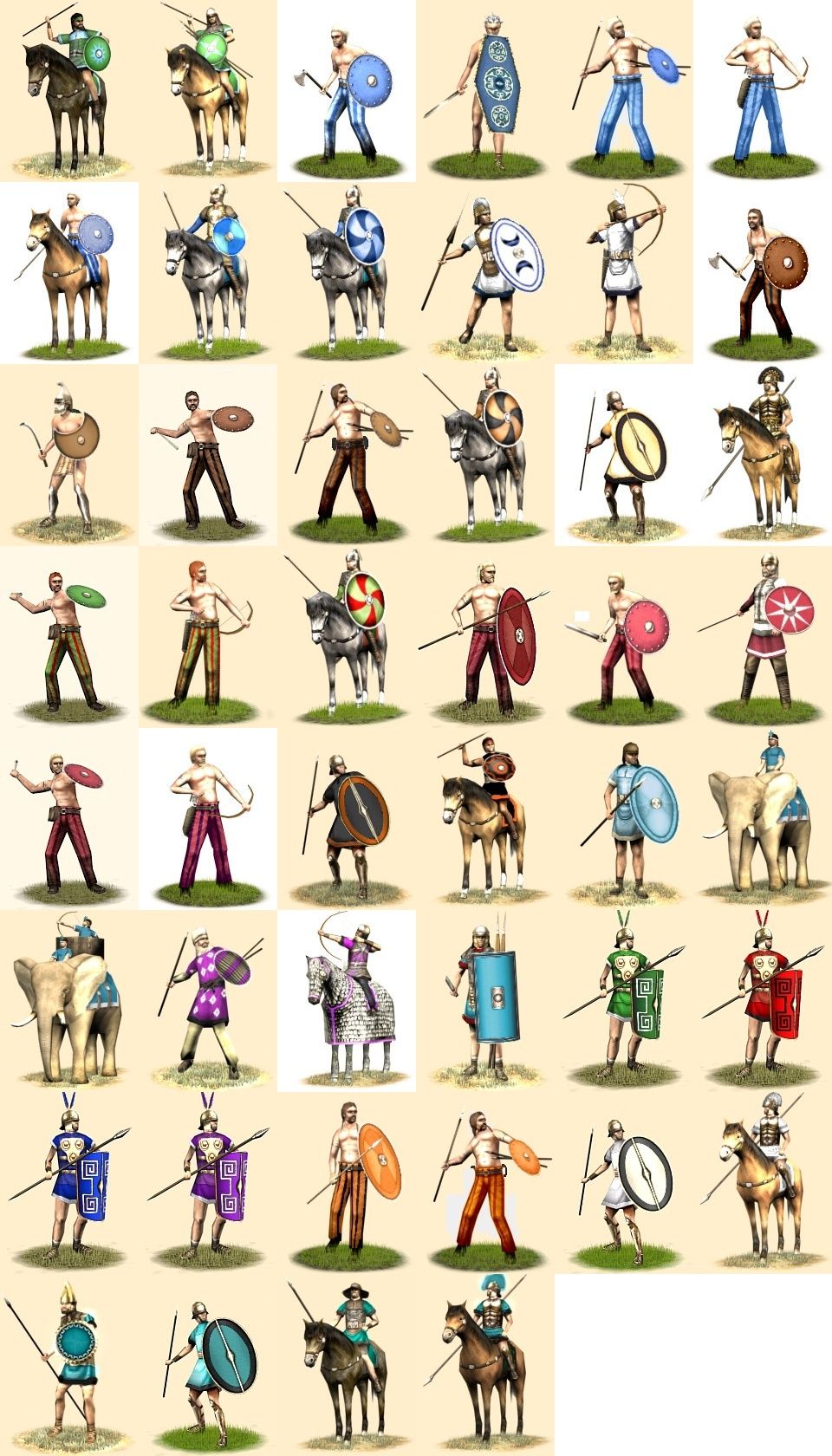 The New units in v8

Okay so they aren't exactly 'New Units' as they are all vanilla units. However, they are all units that I felt should have been on their factions in vanilla. I also removed some units, here is the Log:

-Added Greek and Eastern Advisors & UI from BI and Alexander

-If you have an old HRTW version, delete it as this will not work with it.

-One thing that I need to be clear on, is this mod runs on the Alexander.exe not the regular Rome Total War exe. Please make sure you use an Alexander Install.

IF YOU DO NOT FOLLOW THE ABOVE INSTRUCTIONS, NOTHING WILL WORK!

All of you - For Helping, testing and playing this mod, thank you!

Is this compatible with classic Rome Total War?

You need the Alexander expansion to play it, luckily it’s less than $5 on steam!

The game still plays, but I get an error , Data base table error found unreconised record id roman archer requested, can you help thanks