STATE OF THE MOD:

i rarely play anything other than allied so i dont know anything about the panzer elite or the whermacht :/
this is where you guys come in! have a great idea? PM me and get mentioned in the credits!

just so guys know, i need some more people if i want to make this mod amazing!

PM me if you want to join in,

Q: when will we be able to play this mod?

A: TBD for normal people, for beta testers when the american faction is finished

Q: will the mod be finished at release?

A: no, most likely there will still be one or two factions to work on.

A: yes, but only if you give me advice/if you think of a new unit/if you help me in anyway.

Q: what do i need to play this mod?

Q: what can i expect from this mod when it releases?

A: at least the american faction finished (which means: new units, new doctrines). and maybe one or two other faction done.

Q: in what order are you altering the factions?

A: america, whermacht, commen wealth and last but not least panzer elite.

Q: on release can i use your mod and/or alter it in any way?

A: yes, but ONLY the full release version of the mod. NOT THE BETA VERSION (this means every version before 1.0)

Wilko, for making the surrender mod

Once every two weeks i will upload a video that shows of a unit and all the abilitys that unit might have!

This weeks unit is: 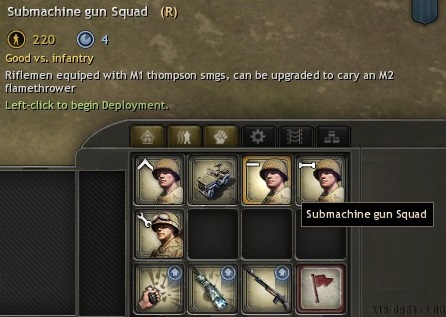 They are your basic anti infantry squad, their tommy guns will rip up infantry in seconds and when upgraded to cary flamethrowers their anti infantry power is unimaginable!

They are built from the barracks for 220 manpower and take up 4 population and take 28 seconds to built, one soldier has 80 hitpoints. They can not built defences or gain acces to grenades, sticky bombs and the BAR assault rifle.

the video shows the squad fighting and upgrading to a flamethrower unit:

I suggest a unit type the sappers who can repair only the vehicles and that only anti-tank weapons (type 3/4 per team) absolutely useless against infantry, and wanted to know if he's going to add any map?

no sorry, i already made a anti tank squad and sappers... eh, maybe in an other faction? and im not a mapper. but if anyone wants to add a map you can PM me.

i have a new unit for you if your interested to make it. its a french resistance as a call in for the americans. they would look like whermacet pioneers. but they would have shotguns and molitolv cocktails.

please tell me what u think.

The mod is dead, sorry. I will anounce it.

that sucks. i really liked this mod.

im not working on panzer elite now :). im working on america, and after that its axis then commen wealth and lastly panzer elite.
but i will keep this in mind. if you want to become beta tester you should suggest troops for america or axis. as they are the first two on my list. but thanks for sharing your ideas :D

for Americans unit called Marines maybe with some additions to name some cool type "red devils" or a variant a little basic type landing troops, to the "red devils" marine 6 for teams and as upgrades bazooka (I thought 2 to balance with panzerschek that is more effective than that of the allies) light machine guns, submachine guns type thompson and maybe put like ability to pull demolition charges as units are almost behind the lines, you could put together as elite infantry or as a reward in the defense doctrine / infantry, while the basic variant the landing troops are less resistant and the only upgrade if only the machine gun.

i think i will add marines, but you need to have the upgrade in the infantry doctrine for two cp to give them HMGs, and they wont get bazookas, i already have three different squads with bazooka :/

ok i'll wait the beta and see the red devils.

you do realise the red devils were British paratroopers right?